After the tragic death of the Lakers legend, we remember his storied NBA career through sneakers

The sneaker world is mourning the loss of Kobe Bryant. On Tuesday, Nike confirmed that the brand has sold out of all Kobe-related items on Nike.com since the Los Angeles Lakers legend died in a helicopter crash on Jan. 26, along with eight others, including Bryant’s 13-year-old daughter Gianna.

Players across the NBA — from P.J. Tucker to Lonzo Ball, Montrezl Harrell, Devin Booker, Luka Doncic, Buddy Hield, Langston Galloway and Tobias Harris — have worn some of his kicks to pay homage to Bryant, who is also one of the most important figures in the history of sneakers.

Since 1973, when New York Knicks legend Walt “Clyde” Frazier became the first NBA player to get his own basketball shoe, the Puma Clyde, more than 60 players have received signature sneakers. Bryant is the first player in NBA history to have died with a signature shoe to his name.

In 1996, he began his pro career representing Adidas before leaving the brand to join Nike in 2003. Throughout his 20 seasons in the NBA, and extending into his post-playing days, Bryant, who was known for his dedication to innovation and improving performance through basketball footwear, received 22 signature sneakers, with more than 20 additional team shoe models bearing his logo and name.

Here are eight sneaker moments that help tell the story of his life and career: 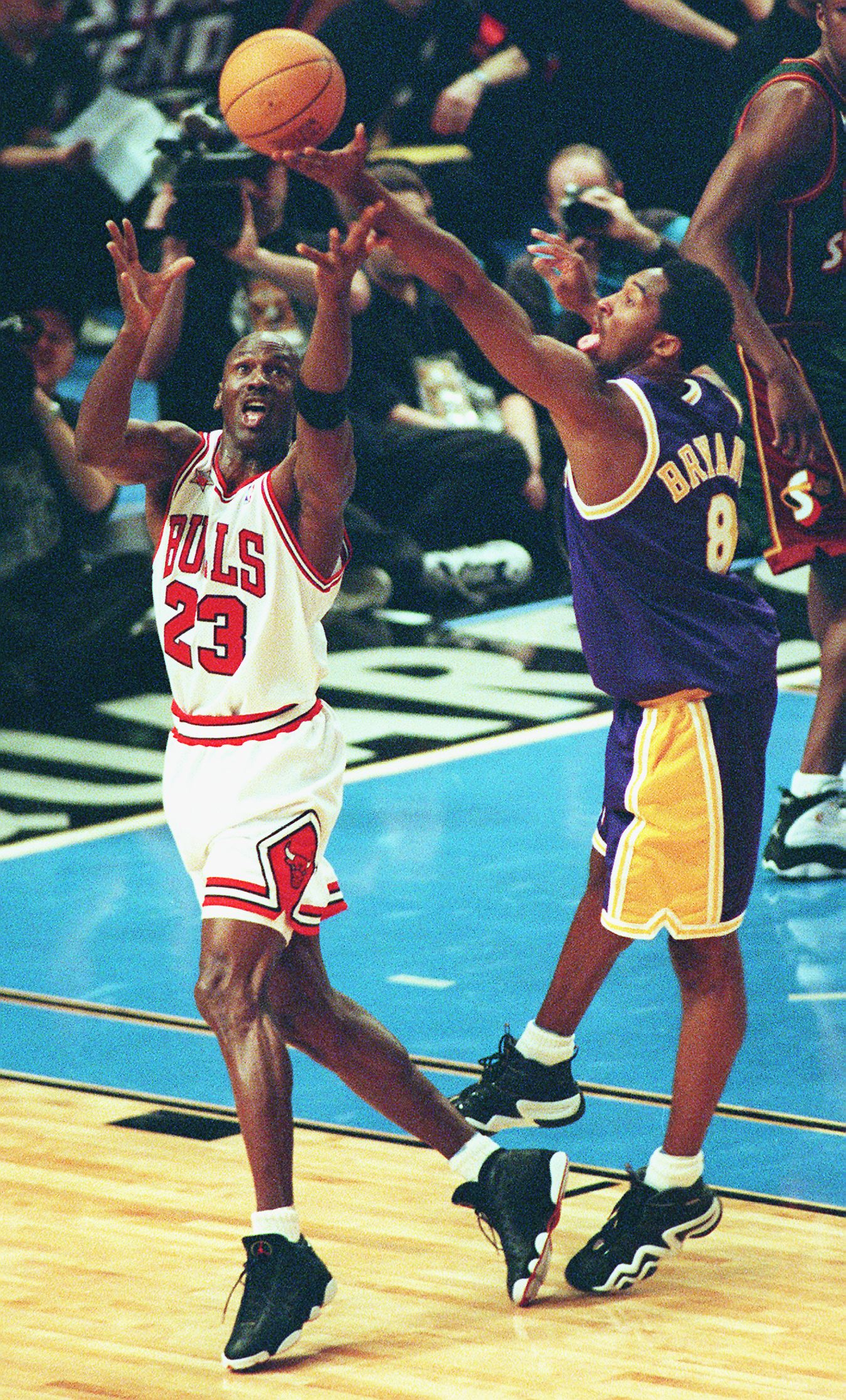 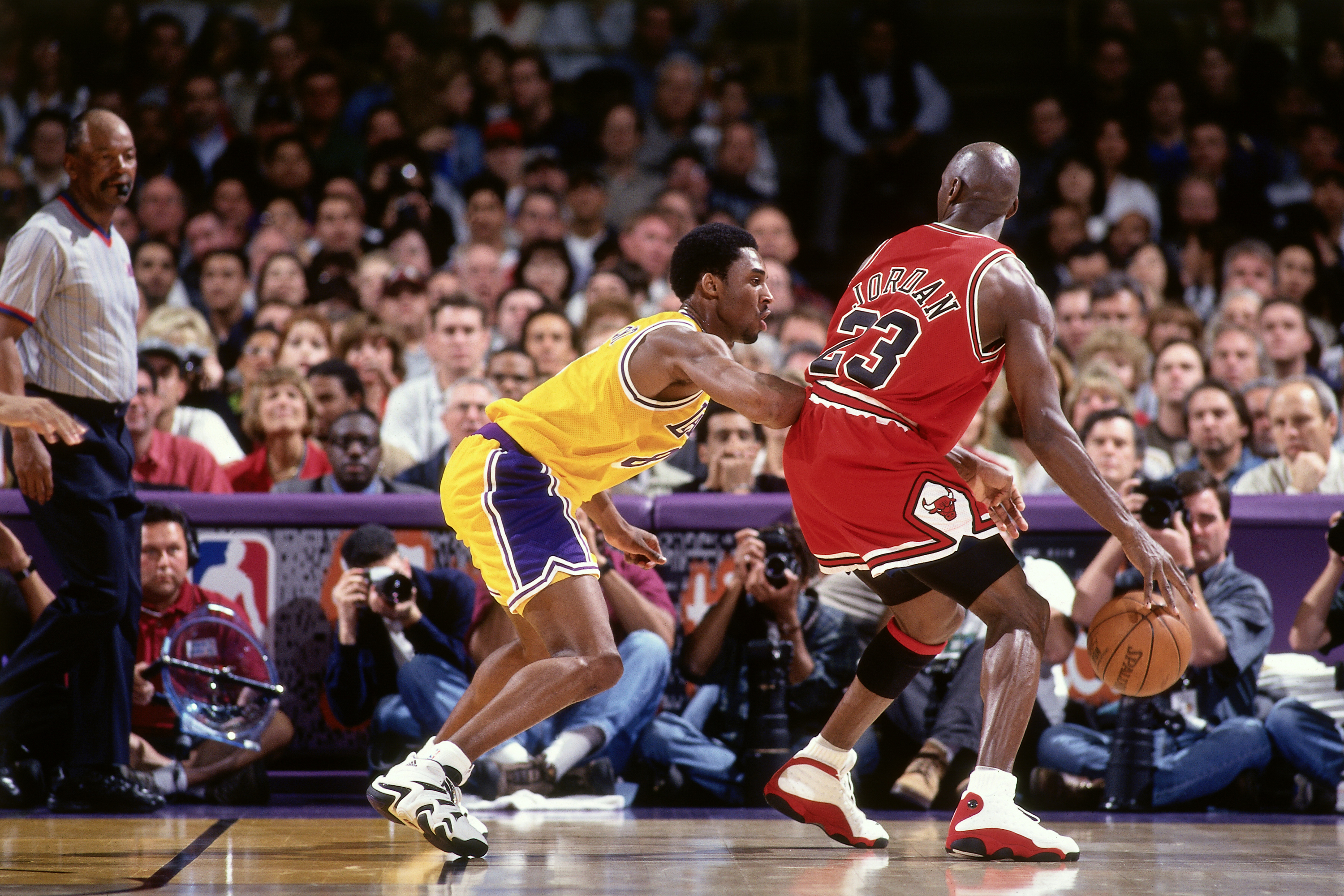 Kobe Bryant (left) of the Los Angeles Lakers defends against Michael Jordan (right) of the Chicago Bulls on Feb. 1, 1998, at The Forum in Inglewood, California. Andrew D. Bernstein/NBAE via Getty Images

In May 1996, about a month before Bryant was selected 13th overall in the NBA draft, the then-17-year-old phenom out of the Philadelphia area’s Lower Merion High School signed a multiyear endorsement deal with Adidas. After playing in the brand’s EQT Elevation model during his rookie season for the Los Angeles Lakers, Bryant received what many consider to be his first signature sneaker, the Adidas KB8, at the start of his second year in the NBA.

During the 1997-98 season, Michael Jordan’s last as a member of the Chicago Bulls, Bryant faced his childhood hero on three occasions, each time rocking the KB8s, which became famously known as the “Crazy 8s.”

Their final matchup that season came in the 1998 NBA All-Star Game at New York City’s Madison Square Garden. Bryant, making his first career All-Star appearance, ended up on the losing end. But, wearing a black-and-white pair of the Crazy 8s, he dropped a team-high 18 points for the Western Conference.

Winning the 2000 NBA finals in Adidas’ The Kobe 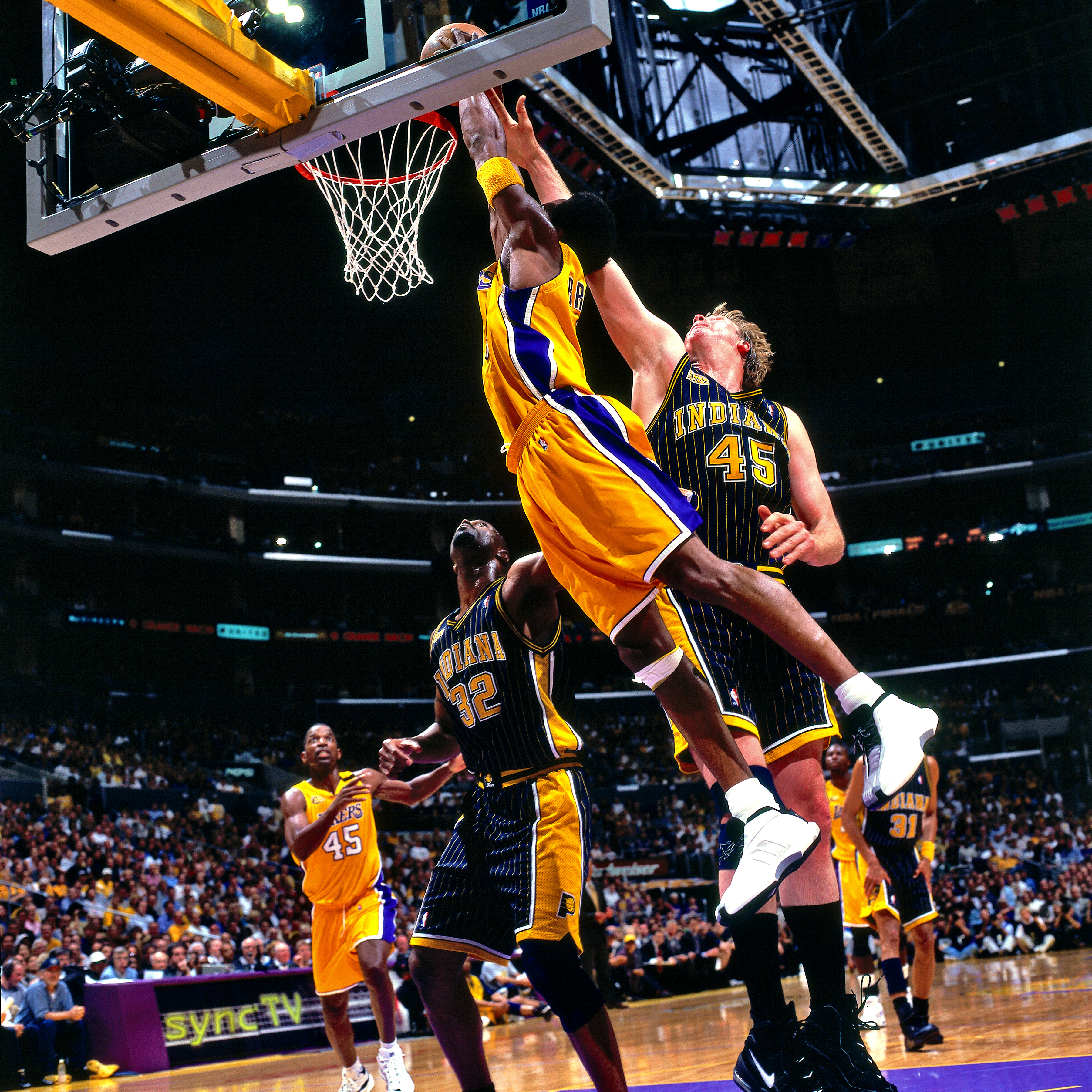 Kobe Bryant (second from right) of the Los Angeles Lakers dunks over Rik Smits (right) of the Indiana Pacers during Game 1 of the 2000 NBA Finals on June 7, 2000, at Staples Center in Los Angeles. Andy Hayt/NBAE via Getty Images 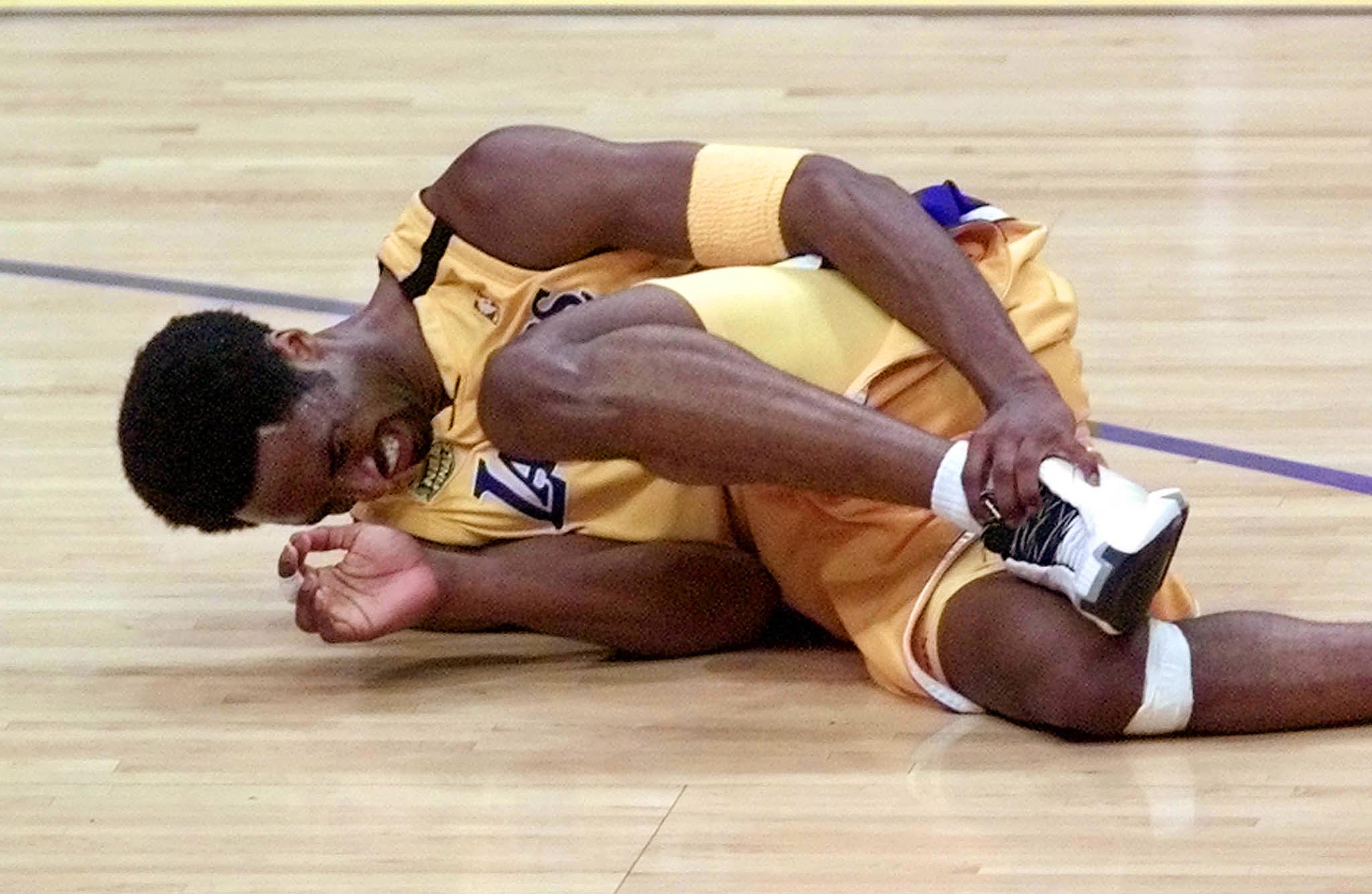 Kobe Bryant of the Los Angeles Lakers holds his injured ankle after becoming tangled up with Jalen Rose of the Indiana Pacers June 9, 2000, during the first half of Game 2 of the NBA Finals at the Staples Center in Los Angeles. Bryant sustained a moderate sprain on the play and left the game. Hector Mata/AFP via Getty Images

Though the Adidas KB8 was the first shoe of Bryant’s career to bear his name, The Kobe, which he debuted during the 2000 NBA playoffs, technically marked the official start of his signature line with the three stripes. Adidas partnered with another German-based company, Audi, for the design of The Kobe, which was inspired by the Audi TT Roadster. The shoe featured a bold and boxy sports car-themed model that notably launched Bryant’s signature Adidas logo: a profile silhouette of the young Afroed hoops star, who became known as “Frobe.”

One of the timeless images of Bryant wearing the shoe was taken during Game 2 of the 2000 NBA Finals between the Los Angeles Lakers and Indiana Pacers, when he sprained his left ankle after Jalen Rose landed on it while defending him.

Bryant sat out of Game 3 before returning to the court wearing The Kobe and helped lead his team to a 4-2 series win over the Pacers. This marked the first NBA title of his career, and the beginning of a Lakers three-peat. 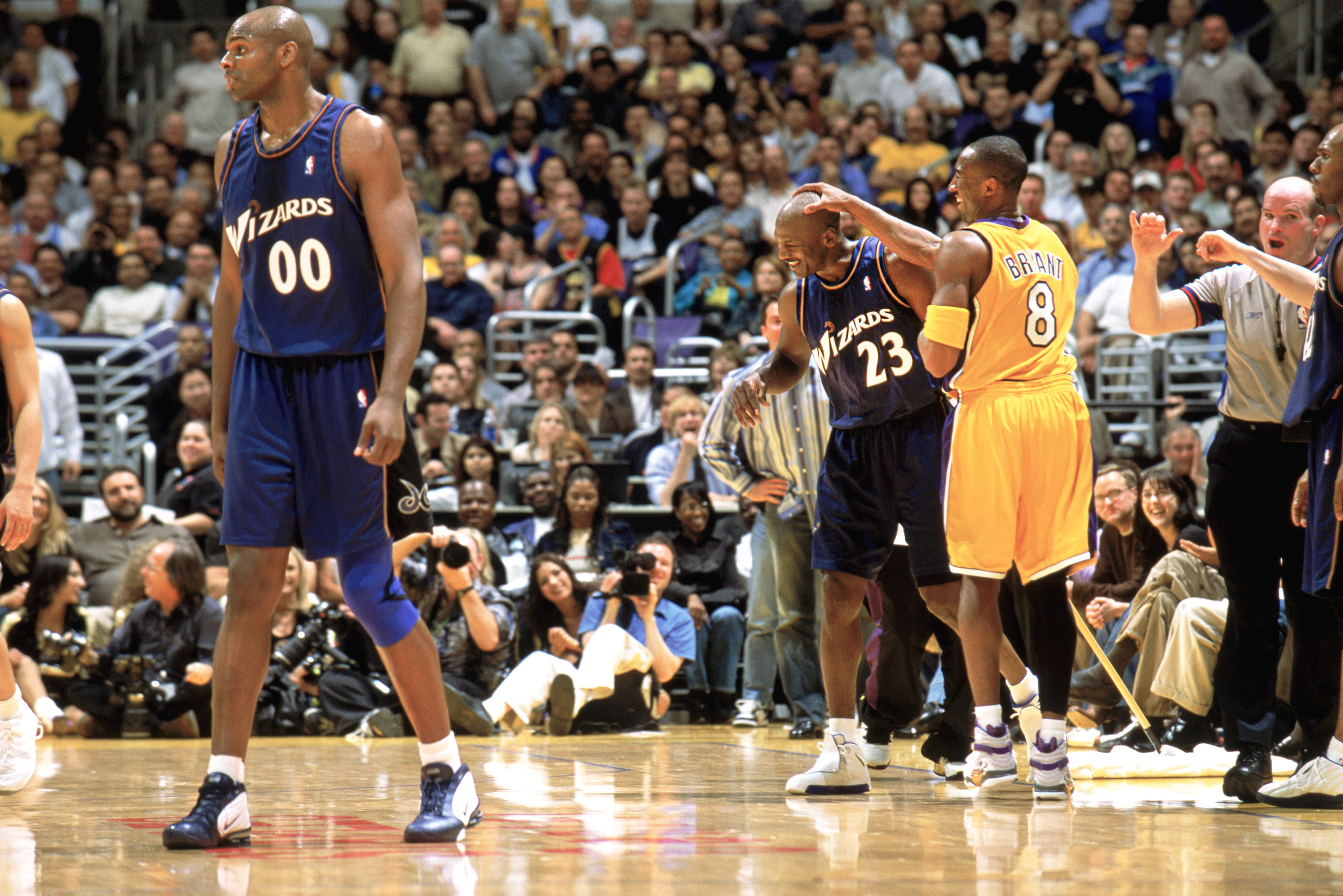 Michael Jordan (center) of the Washington Wizards has a moment with Kobe Bryant (right) of the Los Angeles Lakers during the game at the Staples Center March 28, 2003, in Los Angeles. Andrew D. Bernstein/NBAE via Getty Images 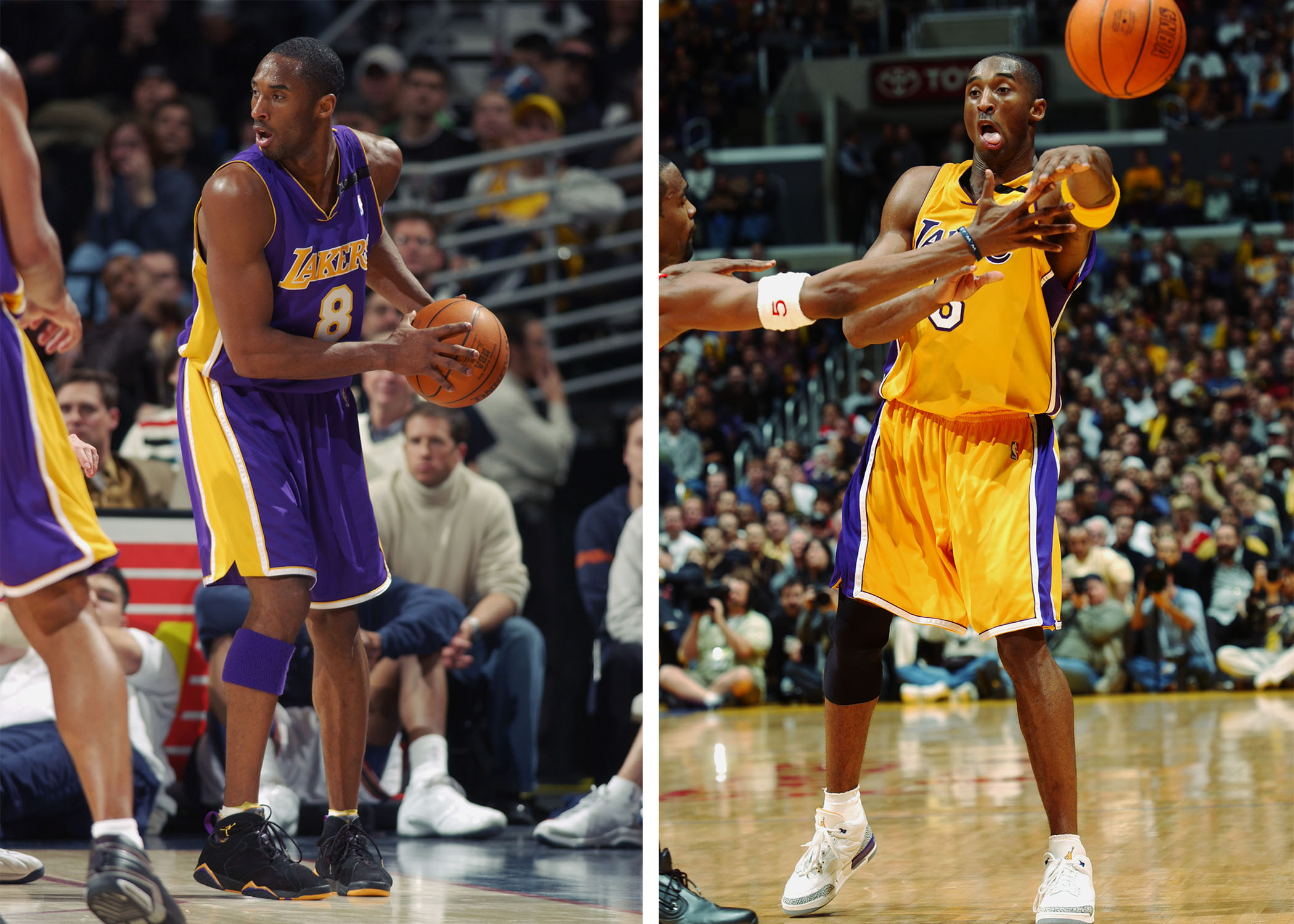 After repping Adidas for the first six years of his career, Bryant paid $8 million to get out of his contract with the brand and spent the 2002-’03 NBA season as a “sneaker free agent.” As he mulled over the next company he’d join, Bryant played in every sneaker imaginable — from Nike Air Force 1s and Air Flight Huaraches to AND1 Desires, Reebok Questions, Converse Weapons and a slew of Air Jordans, including “True Blue” 3s, Chrome low-top 6s, “Concord” 11s, as well as “French Blue” and “Flint Grey” 12s.

scoring 81 in the Nike Zoom Kobe 1

It’s hard to forget the Air Zoom Huarache 2K4, the shoe that started Bryant’s journey with Nike. After a meeting with brand designers Eric Avar, Tinker Hatfield and Mark Parker, when the Lakers star expressed his fascination with great white sharks, Nike delivered the sleek silhouette that Bryant wore throughout the 2003-04 NBA season, notably in a red, white and blue colorway that he rocked in the 2004 All-Star Game at Staples Center to match the Western Conference’s home uniforms. He also broke out multiple Lakers-themed colorways of the Huaraches throughout his team’s 2004 playoff run.

Bryant headlined the Nike Air Zoom Huarache 2K5 model before debuting his first Nike signature sneaker, the Air Zoom Kobe 1, in January 2006. The most memorable game of Bryant’s career, an 81-point performance against the Toronto Raptors on Jan. 22, 2006, came in a pair of white, purple and black Nike Air Zoom Kobe 1s, which the brand retroed in 2019.

The face of the Nike Hyperdunk in 2008

In 2008, Bryant captained USA Basketball, aka the “Redeem Team,” to a gold medal at the 2008 Beijing Games in China, hopped out of a DeLorean and, yes, jumped over a speeding Aston Martin — all while serving as the face of one of the most successful basketball sneakers in Nike’s history. 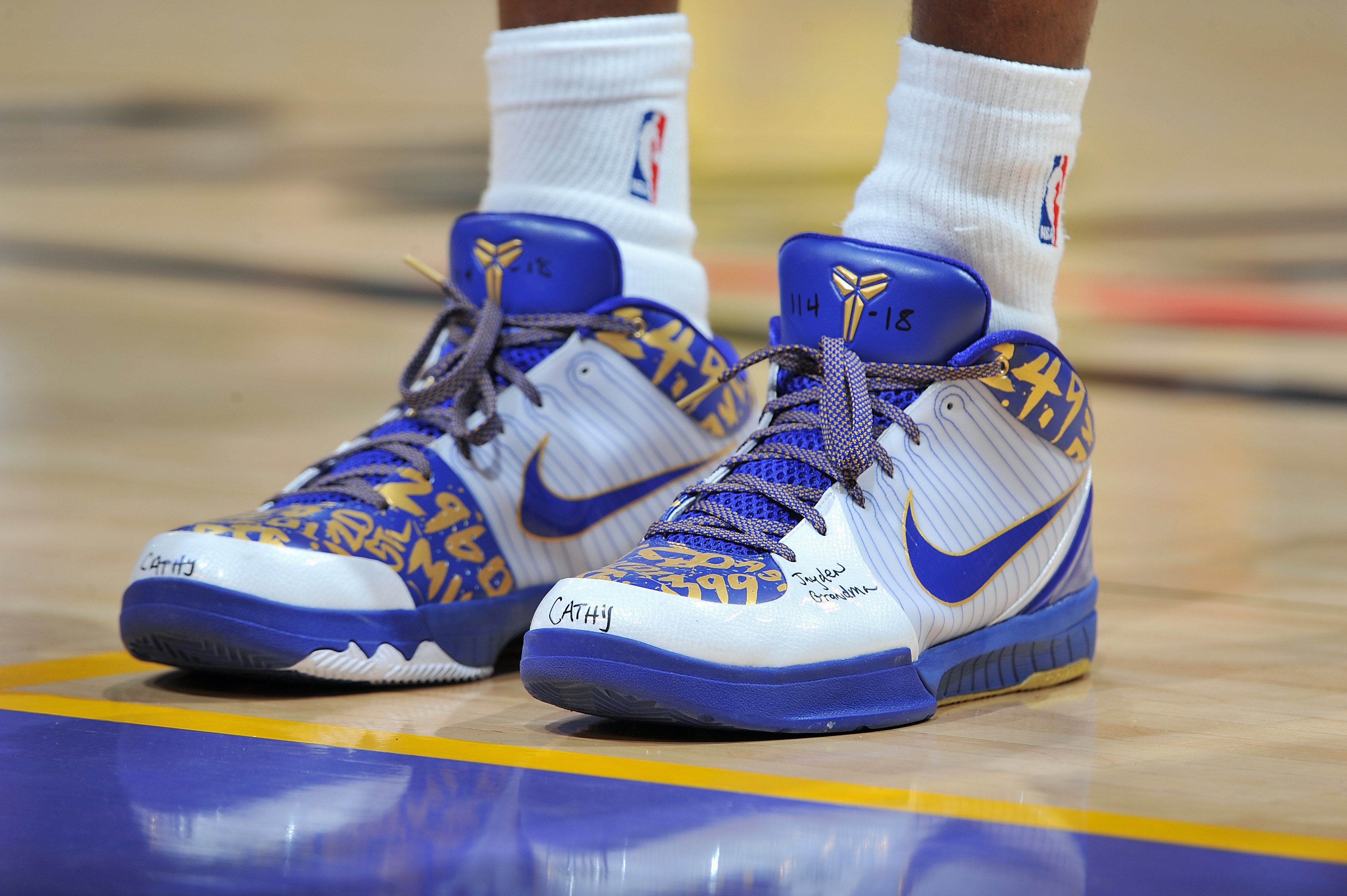 A view of Kobe Bryant of the Los Angeles Lakers sneakers used against the Orlando Magic during Game 1 of the 2009 NBA Finals at the Staples Center on June 4, 2009, in Los Angeles. Garrett Ellwood/NBAE via Getty Images 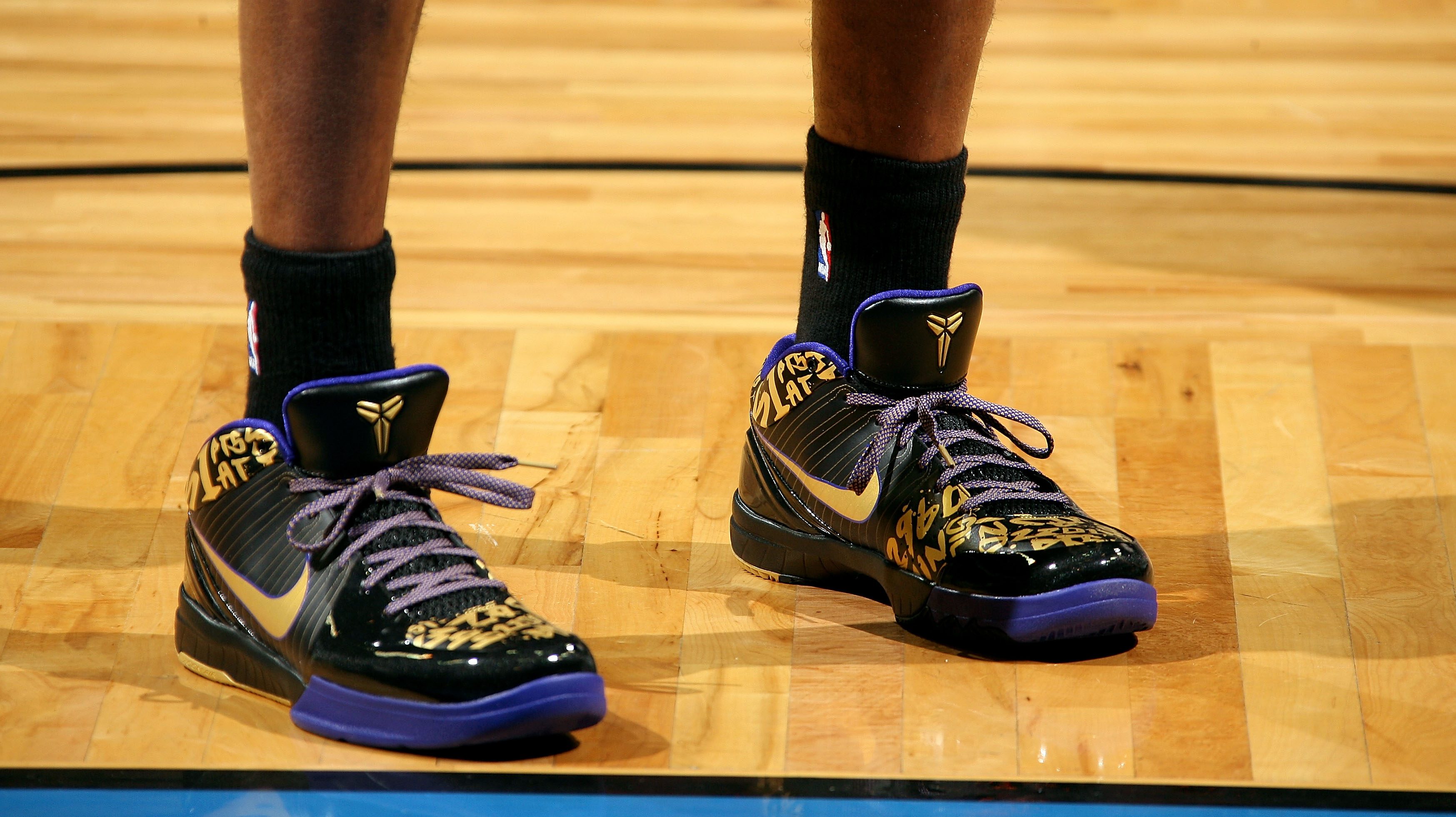 A detail of Nike sneakers worn by Kobe Bryant of the Los Angeles Lakers as he warms up against the Orlando Magic in Game 4 of the 2009 NBA Finals at Amway Arena on June 11, 2009, in Orlando, Florida. Nathaniel S. Butler/NBAE via Getty Images

In December 2008, Bryant debuted the Nike Zoom Kobe 4, which is widely regarded as his best signature basketball sneaker. By the end of the 2008-09 season, he and the Lakers claimed their first championship since the franchise’s three-peat in the early 2000s with Shaquille O’Neal, while Bryant also earned his first career Finals MVP. Throughout the 2009 NBA Finals series against the Orlando Magic, which the Lakers won 4-1, Bryant wore three pairs of Kobe 4s, including the white, purple and gold “61 Points” colorway (on which he wrote the names “Cathy,” “Jayden,” “Grandma” and “Mildred” in honor of his teammate Lamar Odom’s relatives who had died), as well as a black, purple and gold pair, known as the “Finals MVP” edition, which he closed out the series wearing.

In 2019, Nike celebrated the 10-year anniversary of Bryant leading the Lakers to the 2009 title by releasing 10 pairs of Protro (performance retro) Kobe 4s. Meanwhile, more than 100 active NBA players have laced up Kobe 4s in the ongoing 2019-20 season. It’s a silhouette that’s stood the test of time. 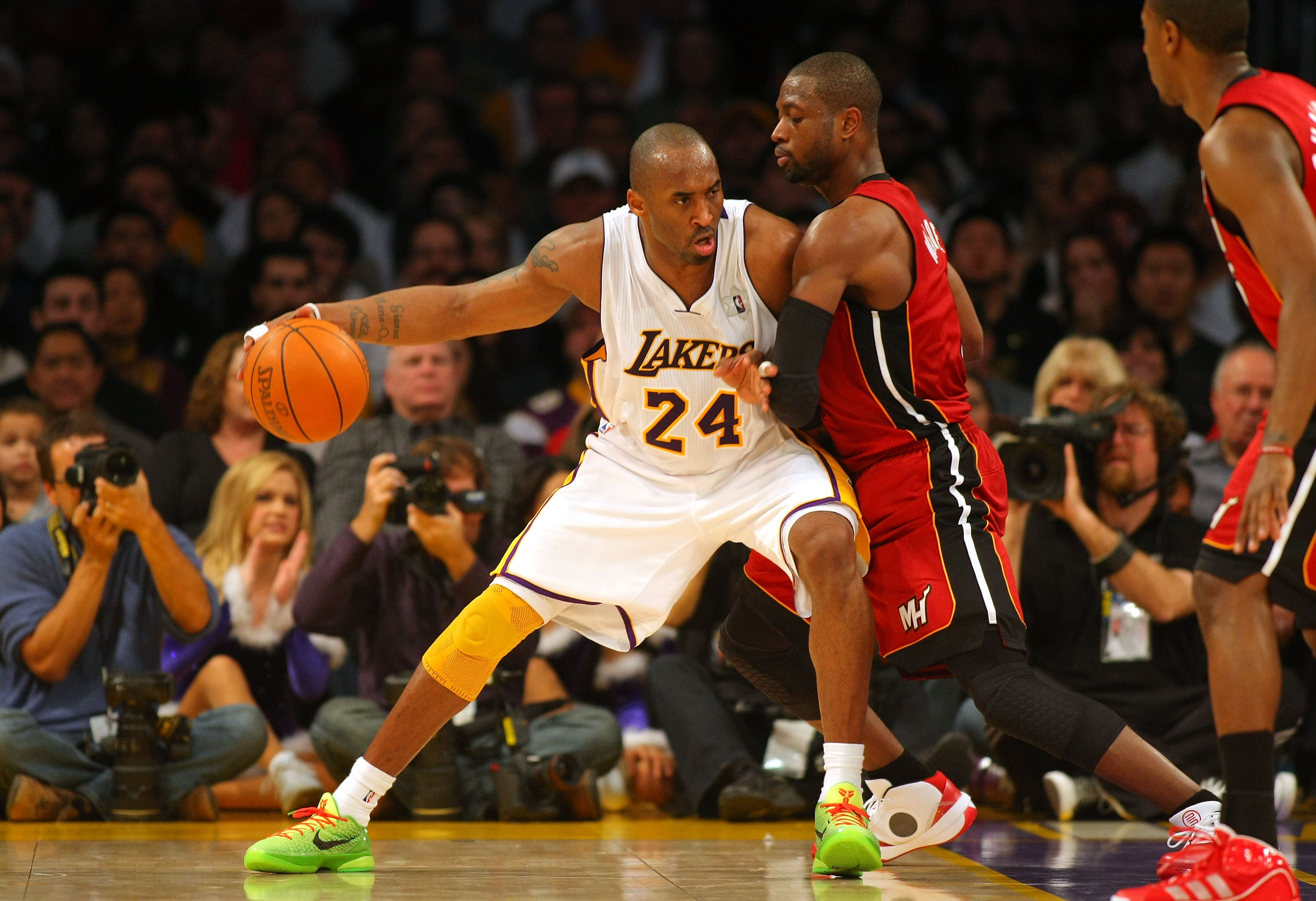 Kobe Bryant (left) of the Los Angeles Lakers posts up Dwyane Wade (right) of the Miami Heat during the NBA game at the Staples Center on Dec. 25, 2010, in Los Angeles. Victor Decolongon/Getty Images 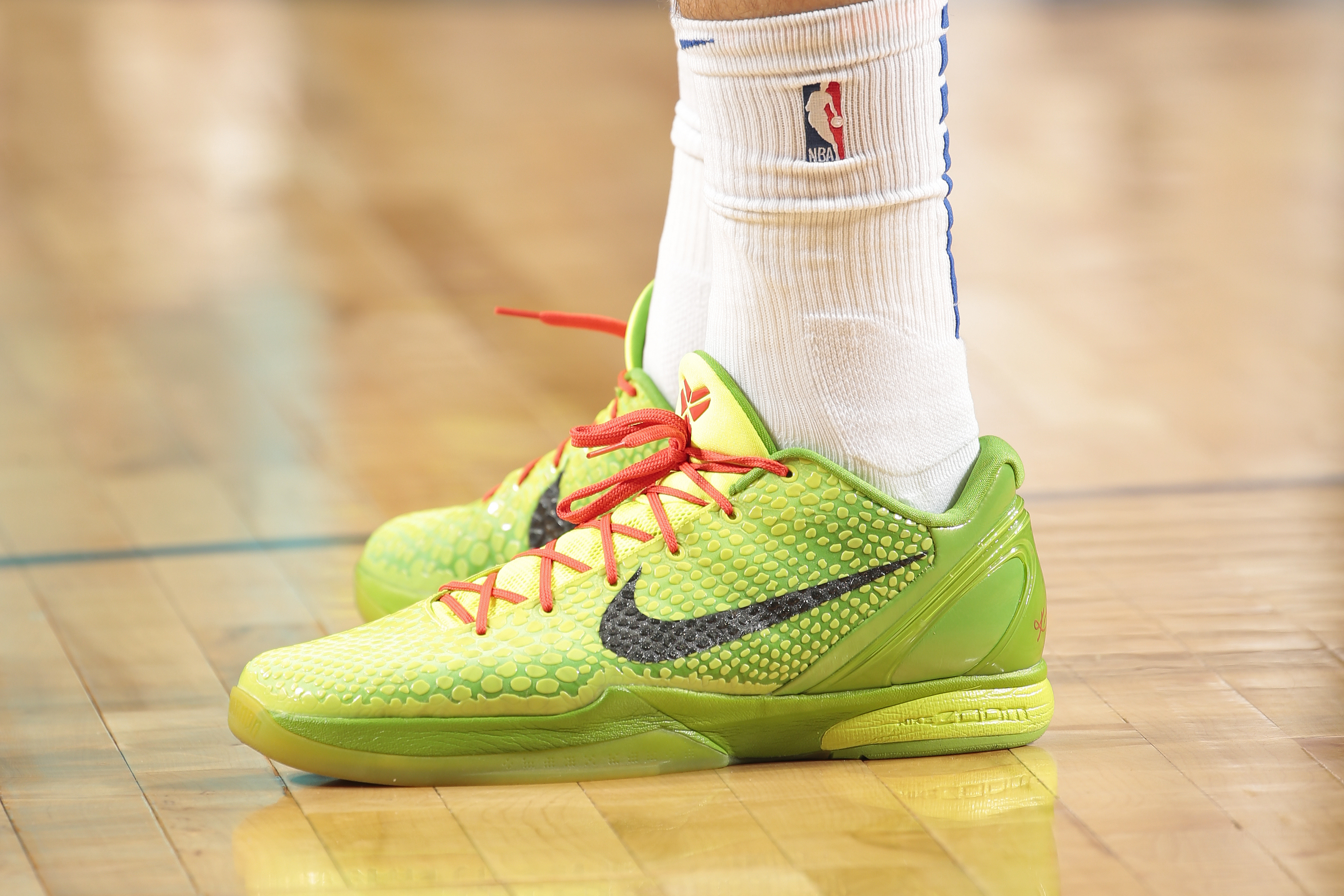 The sneakers of Luka Doncic of the Dallas Mavericks during the preseason game against the Charlotte Hornets on Oct. 12, 2018, at the American Airlines Center in Dallas. Glenn James/NBAE via Getty Images

On Dec. 25, 2010, Bryant debuted the “Grinch” Nike Kobe 6s at the Staples Center in Los Angeles during a game against LeBron James, Dwyane Wade, Chris Bosh and the Miami Heat. The Grinch Kobe 6s are — without question — the greatest Christmas-themed sneakers in NBA history, while they could also be considered the most recognizable and revered shoe of Bryant’s career. Players across the NBA, from P.J. Tucker to Luka Doncic, Kyle Kuzma, Jordan Clarkson and Josh Hart, have broken out pairs of the shoe (which has only been released one time) and worn them on the hardwood.

In December, Phoenix Suns swingman Kelly Oubre Jr., the only player in the NBA who reps Converse, wore a pair of “Nocturnal” All-Star Pro BBs that were inspired by the Grinches. “All homage paid to Kobe ‘Bean’ Bryant,” Oubre Jr. told The Undefeated. With 2020 marking the 10-year anniversary of the “Grinch” Kobe 6’s release, it’s only right that Nike delivers a retro of the iconic shoe.

The Little Mambas in the ‘Chaos’ Nike Kobe 5 Protro

This was just yesterday. No words. RIP to a true legend. 🐍 #MambaForever #MambaOut

On Jan. 25, Gianna Bryant’s AAU team, known as the “little Mambas” and coached by her father, were photographed during a basketball game wearing the “Chaos” Nike Kobe 5s, which retroed for the first time on Jan. 3 after the original 2009 release. The “Chaos” 5s will now forever be remembered in sneaker culture as the final pair of Kobes to have been released before the lives of Bryant, his daughter and seven others were tragically taken.