As a prep star at Harrisonburg High School, Kristi Toliver wore the No. 5 on her jersey because of Jason Kidd.

So it was quite the full-circle moment for Toliver, whose basketball journey had since taken her from Virginia Ms. Basketball to NCAA champion to two-time WNBA champion to sitting across from Kidd via Zoom, along with former player and now vice president of basketball operations for the Dallas Mavericks, Michael Finley, to interview for a spot on Kidd’s new coaching staff.

“That was a really cool full circle for me to just be on a Zoom with two of these guys that I have a ton of respect for and now to be in a position where I have an opportunity to work with them,” said Toliver, who will join the Mavericks as an assistant coach after the WNBA season ends.

This will be Toliver’s second stint on an NBA sideline. She previously served as an assistant coach for the Washington Wizards. 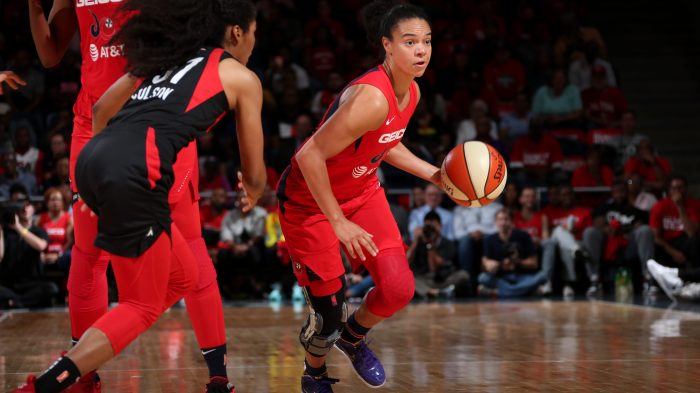 Mystics’ Kristi Toliver is back on court as a teammate, and a coachRead now

But before Toliver joins the Mavericks, she’ll be a key piece for a Los Angeles Sparks team in the middle of a playoff hunt.

The Sparks haven’t missed the playoffs since the 2011 season, but to ensure that postseason streak lives on, Los Angeles has some work to do. Four teams will be contending for the league’s final two playoff spots. The Sparks, who currently sit in the 10th spot in the standings with a 10-16 record, are just half a game behind the eighth-place New York Liberty. Three of the Sparks’ final six games will come against three of the current top four teams in the WNBA.

The 2021 season has been marked by a series of ebbs and flows for Toliver. Returning to the WNBA in 2021 after opting out last season, Toliver joined a new team, had to learn a new system and would become a much-needed veteran presence on a Sparks roster that has been hampered by injuries. Toliver herself missed six games before the Olympic break due to an eye injury.

Just as Toliver has felt more comfortable on the court in the second stretch of the season, scoring in double figures in three straight games for the first time this season during the Sparks’ recent four-game winning streak, she was sidelined with a hand injury after a game against Connecticut on Aug 26.

Despite the setbacks, Toliver has embraced the challenges that have come with the season.

“I’ve enjoyed this process because it hasn’t been an easy one,” Toliver said. “Usually when you’re dealing with discomfort and just newness, it brings out the best in you.”

She recently spoke to The Undefeated about the Sparks’ playoff push, her new assistant coaching job with the Mavericks and the joy of being a resource for other players in the league interested in coaching.

You returned after a year away, have had to acclimate to a new team, be the veteran voice in the wake of injury and have suffered injury setbacks of your own. How tough has this season been for you personally?

It’s been challenging. This season personally for me, not playing for a whole season. In the offseason, not getting to work on specific things that I wanted to because of my health and doing physical therapy five times a week for four or five months trying to get myself healthy to be able to play. It’s been difficult. I wanted to be in 2019 form when that just wasn’t a reality yet. So I had to be patient with myself with getting used to new teammates, a new coach, a new system, different philosophies offensively and defensively.

Whether I was in or out, just having that leadership for the younger players, that was a big purpose of me being here to help serve and continue to, obviously, to get myself better, but also make my teammates better. Every season is different. I’ve just been enjoying this journey because it’s allowed me to stretch personally in certain areas, and that’s what you want. You want to be able to stretch and grow and I’ve been able to do that here.

With the Sparks entering the second half of the season fighting for a spot in the postseason, what was the message for the team coming out of the Olympic break?

We understand that we control our own destiny and I think that’s really exciting for us just knowing that we can decide and dictate our future in making the playoffs and making the push. For us, it’s all about taking every single day one game at a time, but having that focus and resiliency and competitiveness night in and night out, and controlling the controllables and understanding if we do that we’re going to give ourselves a really good opportunity.

This team has had to overcome a lot of adversity in the form of player injuries. How hard was that to manage for much of the season, and now that players are returning, how does that change the team dynamic?

Health is obviously extremely important, not only for us but for every team when you’re trying to compete, get into the playoffs and win games. I thought just our ability to manage that adversity and play through it – I thought it was an opportunity for some of our younger players, and players that might not have been on teams before where they really haven’t had a legitimate shot at making the playoffs and making a push, taking advantage of a new opportunity and situation and just playing through it, grinding through it, getting that on-court experience.

There’s nothing like it. That’s where growth really happens, is when you’re out on the floor and you’re able to perform during those difficult times. I thought everybody did a really great job just weathering the storm. Even though it wasn’t always necessarily that we were going to end up in the win column, we were continuing to learn throughout that rough patch. Obviously now with everybody back, getting into playoff form, it takes time for everyone, even the guys who were out – finding that rhythm, finding that pace, getting that familiarity with one another. We’re still in the process of that, but you can certainly see the shift when a team is fully healthy and not.

How important was it for you to get back onto an NBA sideline in a coaching capacity?

For me, it is extremely important. I wanted to get back into the NBA after being out for a year. I enjoy the hell out of it. I had such a great experience with the Wizards, just being around those guys and learning so much from a coach’s point of view as opposed to a player.

I wanted to get back, so I’m obviously extremely thankful that the Dallas Mavericks gave me a call and we were able to talk and just made it happen. Extremely happy, extremely thankful and really looking forward to the opportunity.

Could you share some more details on the hiring process with the Mavericks and how that process transpired?

With the Mavs it was [Mavericks general manager] Nico Harrison, Michael Finley, Jason Kidd, that was my first call, it was all three of them. We had a good, solid conversation that allowed them to get to know me and me get to know them and understand what we were trying to do, what they wanted, what my strengths and what my room for improvement is as a coach, and what I can offer and bring. Just like any other job you would have. It was really good, I felt really comfortable with them right off the bat.

For me, just being a basketball junkie and all, watching Michael, watching Jason Kidd – I wore No. 5 in high school because of Jason Kidd. That was a really cool full circle for me to just be on a Zoom with two of these guys that I have a ton of respect for and now to be in a position where I have an opportunity to work with them. And then I obviously had follow-up conversations after that initial one, but it was a pretty seamless process. I think the comfort level and camaraderie was there from the jump, and I think that’s why this is going to be a really good situation.

Is there a person or group of people you turn to for advice, specifically when it comes to making decisions about your future as a coach?

Just because I’ve already had two years of coaching experience with the Wizards, those are my guys. Whether that’s playerwise – John Wall, Bradley Beal – and certainly coaching staffwise, I’m fortunate that I’ve already had a little bit of that experience, but those are certainly the guys that I’m going to lean on always for advice, for drills, for situational things. It’s fun being in that basketball coaches community, because once you’re in, you have that forever and I’ll continue to rely on those guys and continue to learn and develop as a coach.

As someone who has been able to become a coach as an active player, have other active players approached you asking how they can also get involved in coaching?

Yeah, there have been. I think that’s what’s been great about it, the fact that I can be a resource for other women, players or otherwise that want to get their foot in the door. I obviously can give my advice and thoughts to them, but I have my resources, so I’m giving out numbers to this guy, that guy, for them to have conversations with. I think that’s the fun part about that coaching brotherhood, sisterhood, whatever you want to call it – once you’re in the door, it’s like I’m now a resource for others.

I’m certainly an open book and will help others as much as I can. That’s also a part of my job. Not only a part of the game coaching and being in it with my team, but also other people and other players that just want to know more. One player that did come to me is now coaching. She’s coaching in the WNBA now, but I know she had great conversations with some of the people that I told her about and to reach out to. So I’m extremely happy to now see her on the sidelines. It’s just a really cool thing to see and be a part of.

Has the NBA always been the destination for you or have you considered coaching at other levels, or leagues, within the sport?

During the Olympic break, I had a lot of interviews, a lot of conversations, and one of the positions was a head coach of a G League team. I know that’s still NBA-affiliated, but a little different, different job. I’m open to everything. Obviously, I’m happy to be in the NBA, certainly that’s where I think I will continue to grow and learn the most as I continue to expand and explore that, but I’m never a person that’s going to shut a door to anybody, whether that’s coaching a high school team or coaching in the WNBA or anything.

I just want to continue to find my groove and find what’s going to work for me. Based on my experience in D.C., I know the NBA is where I want to be right now. If I continue to grow in this and continue to love it, then I’ll stay there until another opportunity comes and maybe I want to explore that. Right now, I’m just going to continue to be in the NBA, soak up everything and have fun.