In the aftermath of the Milwaukee Bucks briefly boycotting the opening round of the NBA playoffs to protest the shooting of an unarmed Black man by a Kenosha, Wisconsin, police officer, players from the 16 remaining teams in the league’s bubble met to discuss next steps in speaking out against police brutality of African Americans.

Boston Celtics guard Jaylen Brown asked that if players were to leave, “Are you going home to be on the front lines?”

The players decided to resume the season with a focus on fighting for voting rights, and more than a month later, the Los Angeles Lakers were crowned champions after a hard-fought series with the Miami Heat. When the season ended, one of the players on the Lakers’ roster, Danny Green, returned home to work on the front lines.

Even before the season resumed in July, Green, an 11-year guard who has also won titles with Toronto (2019) and San Antonio (2014), attended a march in Los Angeles following the police killing of George Floyd in May. Recently, he partnered with Dove Men+Care’s Commit to C.A.R.E. (Care About Racial Equity) Now initiative, which focuses on Black male media representation, the passage of the George Floyd Justice in Policing Act of 2020 and other initiatives surrounding Black youth.

With the recent attention to Black men and women being killed by police, Green also believes it’s now more important than ever for Black people to have a voice in the political process, both to flex their voting power and to hold politicians and police accountable.

Green spoke with The Undefeated about the importance of the Black vote, what accountability for police shootings would look like and why he doesn’t care what some politicians are saying about the NBA losing viewers for his and his colleagues’ stance on racial justice.

Before you went to Orlando, you attended a protest in California following the death of George Floyd. What made you want to attend?

[Lakers officials] always say be safe at home, but I’ve never been one of the guys looking to just sit at home and not do anything. I also just wanted to see for myself what it was like, especially for such a historic moment. … I’ve never been one of those guys to be in the VIP section. I’m always the guy [who’s] going to be the general public and be on the forefront.

I didn’t feel unsafe or anything like that. I’m not a guy that stands out as much. I’m not 7 feet tall, so I can blend in a little bit. So, yes, I wanted to see what it was like. It’s a beautiful city, everybody in the streets, all races, all communities coming together, people spreading love, giving out orders of food and protesting as a united group. It was amazing to see.

What does the presence of a professional athlete or a celebrity do for these sorts of causes?

Well, it depends. I’m also not the type of guy to try to be under the spotlight and in the bright light. I’m not trying to show that I’m out there and show my face. But when you’re out there showing that you’re there, and you’re letting it be known, it lets other people know how important it is. And I guess it inspires other people to do the same. …

I was going to just be a part of it and to experience it and to be one of the regular people out there, just like everybody else, protesting, getting down on one knee and chanting and then do whatever it takes to get our voices heard. But to bring in our name, our faces to light, and showing that we’re out there and letting people know we’re out there, it can just help bring more awareness and more attention, and people want to be there and understand and be inspired to be a part of it.

Some states have implemented impediments for people of color, particularly Black people, to be able to vote. What changes would you like to see be made so that everyone has the opportunity to vote?

During the stop to the league when we were in the bubble, the biggest ask that we could make to get change quickly was the opening of all our arenas for voting polls. The owners were behind us on it. They backed us on it. Everybody wanted that done, they thought that would be a big win. And the fact that we were able to do most of the cities — we were hoping that other sports followed suit.

Voting suppression is real. We know how real it is just by talking to our people back home. So we were trying to figure out ways to make it easier for them and have more polls and even more bigger places, especially during a pandemic, where there’s so many protocols that people need to be 6 feet apart, wearing masks. It just makes it easier for people to vote when you have these arenas [open]. 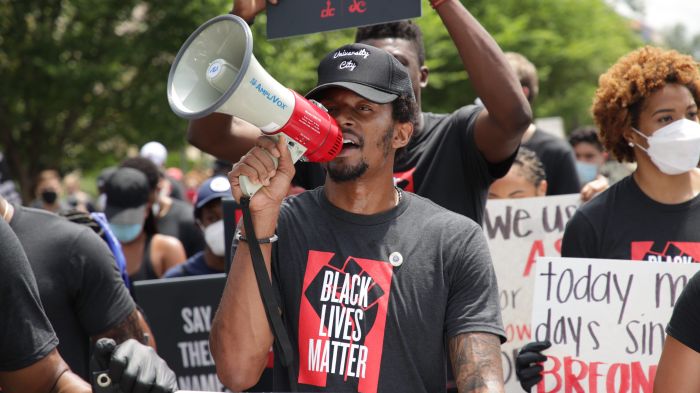 What changes do you believe voting will bring to police brutality or systemic racism?

Well, it starts at the top. If we vote and get the right people in place in the right offices, they know what needs to happen, what needs to change and then hopefully they can make the change of enforcing certain things, certain laws and certain rules and regulations for each city, community, to where there’s more of – I don’t know how to put it into words or how to say it – but there’s more background checks. There’s more tests you have to pass, there’s more levels or steps to be a part of certain [police] forces. And also just the small thing of having people that are familiar with certain areas be a part of that area.

You can’t get that change until you have the right people in place to make the change. And I think if we do get that type of change, I think at least we give ourselves a chance to say we tried to get the right people. Most years when there’s voting happening, there’s so many people that miss out. So many guys even in our league. There’s … millions of people who didn’t vote this year, and then we complain about why we have the people we have in office. It’s like, ‘Well, I should have gotten out and voted.’ But the reason we made the events centers open and have more polling throughout each city [is] it’ll make it easier for people to vote. And there’s no reason or excuses for people not to get there. We need to have that change and it starts at the top, and when we get that done, then hopefully it’ll snowball down as a domino effect to make change in every community and small areas.

You mentioned while you were in Orlando that the bigger picture was seeking justice for people like Breonna Taylor, Jacob Blake and George Floyd. What does justice look like to you?

They had the [settlement] for Breonna Taylor and we felt that was nowhere near enough, just paying the families off. Obviously those officers should not only lose their job, but should be arrested and then tried and convicted. That’s justice for us because anybody else – just because you wear a badge and have a uniform, it should not protect you from the normal rules of life. It’s not OK to kill anybody. It’s not OK to harm or hurt somebody, let alone shoot them. So those things that they’re getting away with or not being convicted or tried for, and only just losing a job, is unbelievable, it’s ridiculous. There’s no other job in the world [where] you’re able to get away with doing those types of things and get off and be free.

In your partnership with Dove Men+Care, one of the goals is representation of Black men and Black boys in society. What long-term or systemic effects do you believe that these types of stereotypical representations have on Black men?

Stereotypes as in us being violent?

I guess, take your pick.

I know a lot of people aren’t educated or privy to it or able to see it, so they’re stopped by police in a car with their African American friends or whoever it may be, then they’re like, ‘Oh, s—, you have to actually be careful when you’re reaching for your wallet.’

I just hope that it changes. I think we’re all looking for that. We want to change the stereotype, the narrative, for us, but for everybody, everybody has a stereotype or narrative and nobody wants to be put in a category. All stereotypes that are negative should be changed or thrown out the window for all races and all communities. But those negative stereotypes are things that have made life difficult for us since before I was born.

You discussing these issues, the league putting Black Lives Matter on the floor, the social justice messages on the back of your jerseys – some politicians have said this type of social activism is driving down ratings. What do you think about that?

Some people are worried, but at the end of the day, what’s right and what’s wrong? I feel like there are some gray areas, but really it’s pretty much black and white for the most part. You should know what’s right or wrong; everybody should be treated equally. And if you don’t believe that, or agree with that, then you have some other issues. Obviously everything is taught, so you were raised a different way, but I’m not the type of person that’s going to tiptoe around certain people’s feelings. I really don’t care, because they’re not tiptoeing around our feelings. I really don’t care for them. It’s not a thing that I care to lose or worry about losing them being a fan or their viewership.