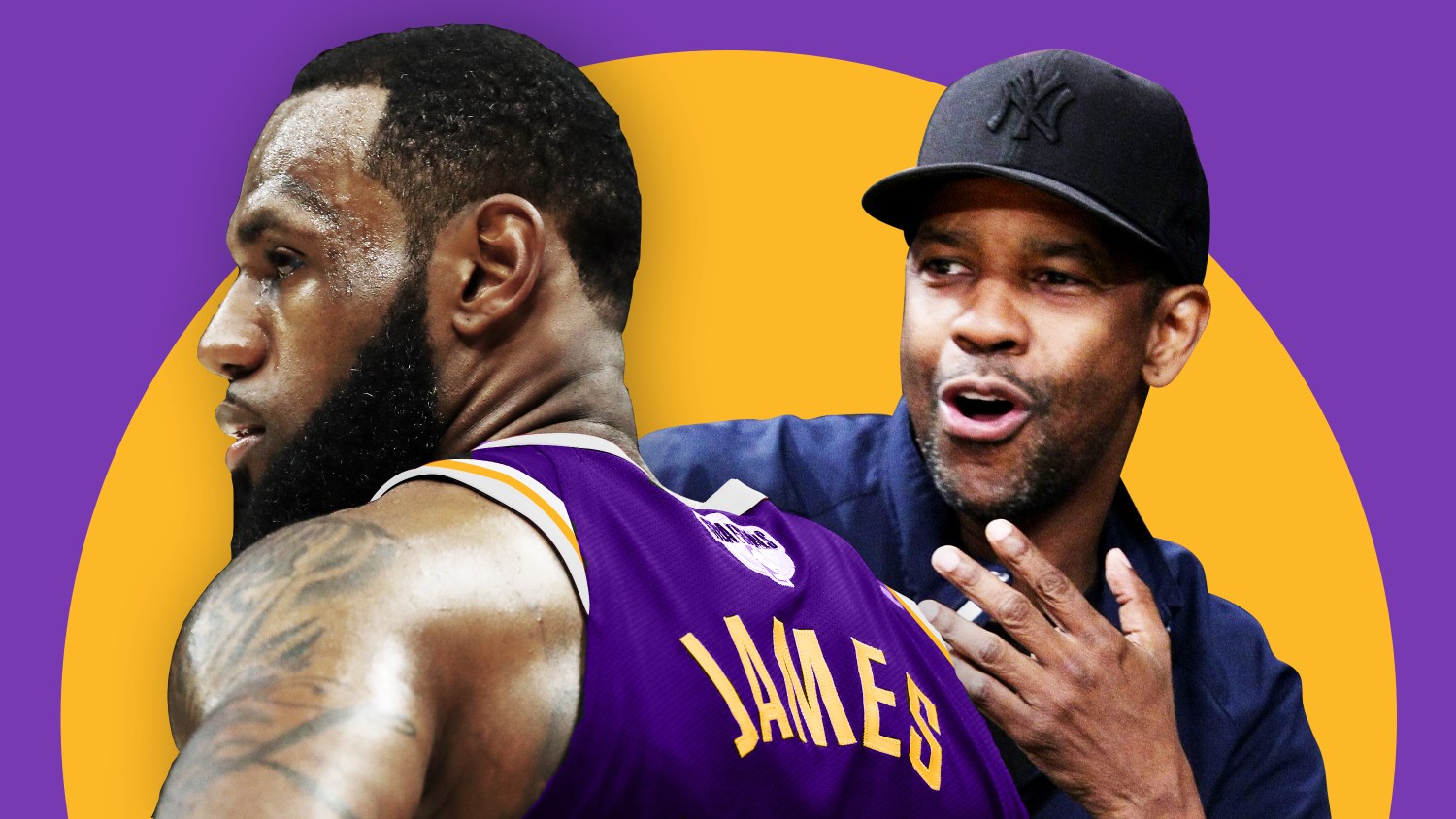 An equalizer that Lakers fan Denzel Washington is superexcited about? LeBron James

‘Oh, wow. Now I’m going to be sitting here and LeBron’ll be close, running by and … dunking!’

It’s the unexpected that Denzel Washington looks for — in his illustrious career and in his choice of a professional basketball team. In both cases, he wants a win. But he likes knowing that he’s in for a fun surprise either way.

Washington, the 63-year-old, two-time Oscar winner who, quite frankly, is one of the best and most consistent actors of all time, is back with revenge fantasy Equalizer 2. His Robert McCall is a retired CIA special ops agent who, as one critic wrote, “believes in justice, likes to help others, and dispenses the occasional lethal killing for those deserving.”

Washington is excited about this film, which is a remake of the ’80s television series of the same name that starred Edward Woodward. Washington’s first go at the project was in 2014, and fans have been begging Sony for this sequel. Washington delivers, and then some.

But Washington is … let’s call him humble. He walks into a room — in this case, a suite in a Beverly Hills hotel — and his familiar suburban New York-inflected vocals fill the space. It’s reasonable to assume that Washington doesn’t make much of his own star presence. Surely, he understands he’s “Denzel Washington,” but does he truly see himself the way his fans do? That’s to be determined.

“I said, ‘We still got our tickets, right? I didn’t sell the season tickets, did I? Of all years, not this year.’ ”

“We did good. It’s a … relief,” he said, at the thought that he pulled off a film sequel. “You don’t know. You have all these ideas and you put all these people together, you spend all this money, and it could still not work, but it does work. It’s a testament to [director] Antoine Fuqua.”

What Washington is looking for at this point in his career is to continue to do good work with good people. “Even in the case of the original Equalizer, it was the idea. The writer, the producer Todd Black said, ‘I’m going to go off and when I’m ready, I’ll give it to you.’ I said, ‘Well, fine. We’ll see. Talk is cheap. We’ll see!’ He gave it to me, I read it. I called him immediately. I said, ‘Oh, when you want to start?!’ It was really that simple,” Washington said. “That’s not usually the case.”

Another thing that is pretty simple is what he’s looking for when he gets to sit in an arena and be entertained by some good basketball — he’s ready for the Los Angeles Lakers to be restored to glory. He’s ready, as he says several times, to be a witness.

“The game is going on. There’s Magic and Kareem running around. All of a sudden you start hearing, ‘Ali! Ali!’ “

Just as sure as folks know that Washington is a learned actor, they know he goes hard for the Lakers. He’s been a season-ticket holder since Kareem Abdul-Jabbar and Magic Johnson were dominating the court. And now that the Lakers have LeBron James? We talk.

What was your immediate reaction when you heard that LeBron was a Laker?

I called my accountant. I said, ‘We still got our tickets, right? I didn’t sell the season tickets, did I? Of all years, not this year. Make sure they’re coming!’ Now we all get to be witnesses.

Magic Johnson recently said that he and LeBron formulated a three-year plan. What would you love to see happen in that first year?

I’d just have to see first. … Obviously he’s one of the greatest that’s ever played the game, so we’re already 10 times better, but we’re in an obviously … tough, tough division. So we’ve still got to get … a couple more pieces.

It’s a great thing for this town. It’s a basketball town. I came up through the Magic era. In fact, the night Robert Townsend and I bought season seats … was a game where Kevin McHale clotheslined Kurt Rambis and a fight started. We signed up that night … I’ve had season tickets ever since!

Anything you’ve seen that has rivaled that moment?

Magic was playing, Kareem was playing. It was an NBA Finals, I think. I used to have seats on the sides before I was on the floor. Howard Bingham, a great photographer, used to sit right behind me. He was Muhammad Ali’s personal photographer for all those years. The game is going on. There’s Magic and Kareem running around. All of a sudden you start hearing, ‘Ali! Ali!’ In the middle of the game he had come in and started working his way up. He’s going to end up sitting right behind us. I’m going, ‘There’s 17,505 people screaming, ‘Ali!’ ‘ Kareem and all these guys are on the court playing, and people aren’t even watching. They’re looking at ‘Ali!’

Pretty soon thousands of people are going to be screaming James’ name.

The unknown. The possibilities. What’s the word they use? Witness. Just to see. It’s like, Oh, wow. Now I’m going to be sitting here and he’ll be that close, running by and … dunking! He was one of the first guys … I remember, I was sitting at a game. I’m like, ‘I could see the bottom of his sneakers he’s so high up in the air!’ I could read the bottom of his sneakers.

A lot of athletes are filtering into Hollywood. Kobe Bryant just won an Oscar for a short. What is your take?

Great! Why not? What’s the alternative? When you retire at 32 or 30, that’s it and now I’m going to rest on my … no. They’ve learned from those who come before them. They’re businessmen and they’re making business moves. Serious moves. Good for them.

He hasn’t. We haven’t talked or anything like that. [But] he’s been doing all right. I’d have to find out what his interests are. He’s got a day job to worry about right now!

What keeps you hungry right now?

The unknown, and it doesn’t have to be movies or parts. Just … life ought to be exciting. If it isn’t? Then you need to re-evaluate.