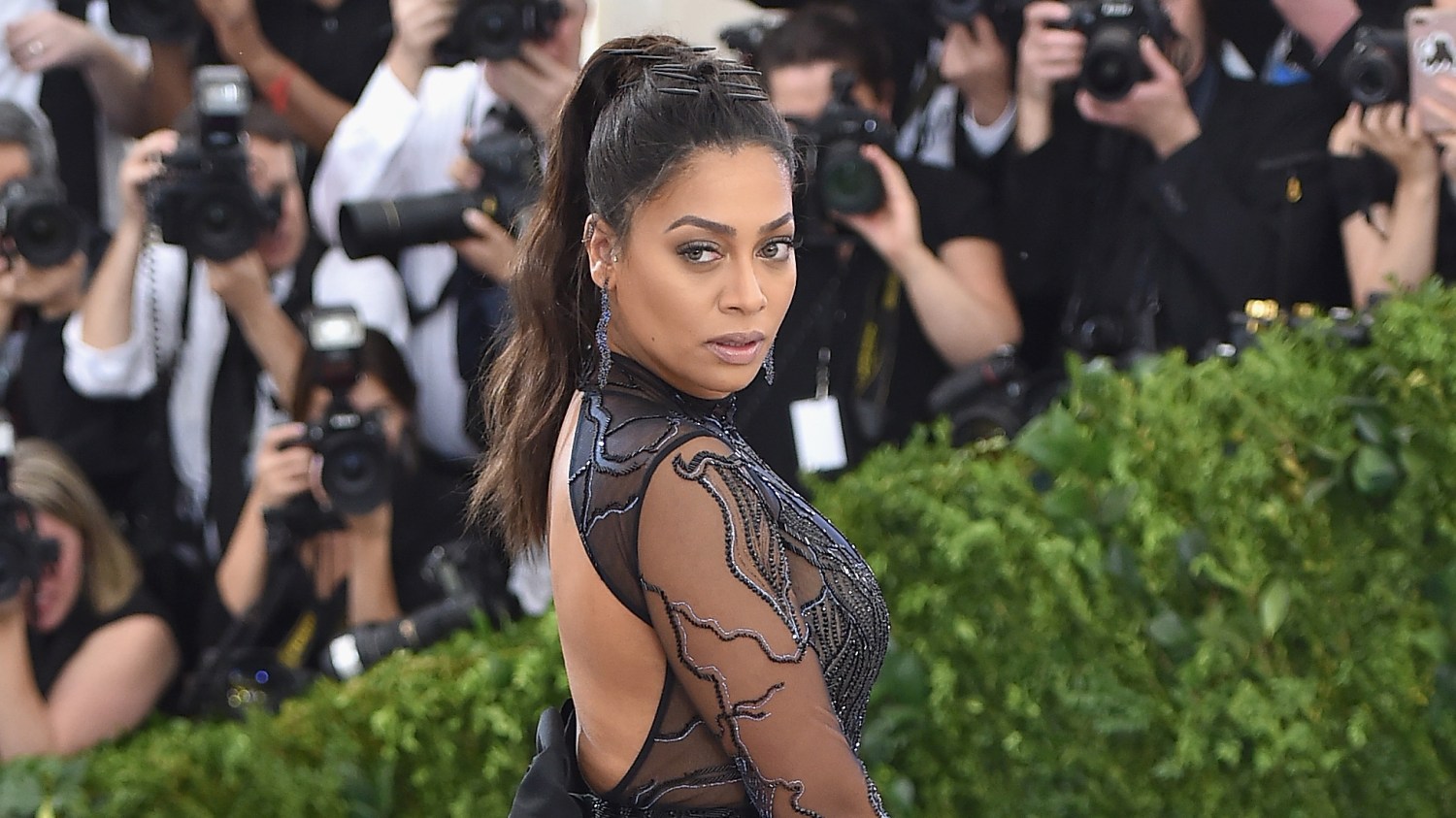 The truth about the mom, actor, author and fashionista’s professional — and personal — star power

La La Anthony breezes into the atrium of Washington, D.C.’s, Mandarin Oriental hotel in curve-accenting fitness gear, fresh from a studio cycle workout. With her hair pulled back in a smart ponytail, scarf tied around her head, sunglasses covering her eyes and not a stitch of makeup on, she’s easily the most beautiful — and the most composed — woman in the space.

Because La La is back. And she’s standing — perhaps — in the best professional place she’s ever been. In the midst of one of the most challenging personal moments of her life, good things are happening for her creatively. The kinds of things for which La La Anthony has spent years laying down a foundation, and things for which she has been fighting.

“I love acting,” she says between sips of an iced tea. “It’s my passion. I’m aligning myself with some great people … and [I’m] continuing to work on my craft and to audition … showing people that not only is it something I’m doing, it’s something I’m good at. It excites me that it feels like it’s just getting started.”

FYI, from here on, this story contains mild spoilers from Starz’s upcoming season four premiere. But we continue:

Anthony has a number of projects on deck. She just wrapped Furlough with Tessa Thompson and Oscar winners Whoopi Goldberg and Melissa Leo. She shot Double Play with Ernest Dickerson, who, among other things, directed Tupac Shakur in the 1992 classic Juice. And Queen Latifah and Anthony have plans to turn her No. 1 New York Times best-seller, 2014’s The Love Playbook, into a film. Lastly, the season four premiere of Starz’s much-watched Power lands June 25, and LaKeisha Grant, as portrayed by Anthony, went missing last season. As many have smartly guessed, she’s back.

That all of this is happening for her as her marriage to star New York Knicks forward Carmelo Anthony is in turmoil is unfortunate, but what Anthony wants everyone to know is, she’s still standing. “It’s a different space for me right now, but a great moment for me, and a powerful one at that. I’m still here. I’m still successful. I’ve been thrown a bad hand at different times in my life, and I’ve never let that stop me from … persevering. And if that’s what I can lend to another woman, then I feel like that’s the success,” she said. “I’ve found the power in that.”

“It’s a different space for me right now, but a great moment for me, and a powerful one, at that. I’m still here. I’m still successful.”

Page Six reports that Anthony recently contacted famed divorce attorney Laura Wasser, who has represented Angelina Jolie and Johnny Depp. But there’s been no word on when — or if — such action will happen between the two, whose love story and nuptials were documented by VH1 in 2010 for the docuseries La La’s Full Court Wedding. High-profile guests such as LeBron James, Ludacris and Serena Williams were in attendance. A spinoff series, La La’s Full Court Life, premiered in 2011 and concluded in 2014. What is known is that the couple have separated — she moved out of their New York apartment on The High Line and now resides in Tribeca.

She also still resides on Power. In the first five minutes of the new season, which last year was the second-highest-rated series on premium pay television, Anthony’s character is revealed from behind a bedroom curtain. She slides it over, showing the world that Keisha, the Keisha who just about everyone had written off, the best friend of Naturi Naughton’s Tasha, is alive and quite well — for now.

So is the actual La La Anthony.

“I learned from Keisha to be careful what you wish for,” said Anthony, “because you just might get it. She wanted the life so bad, and now she’s getting pieces of [it] and realizing, ‘Oh s—, this isn’t what I thought it was!’ But now you’re in so deep, you can’t really get out. Or if you get out, there’s going to be repercussions.”

Anthony says that the grass isn’t always greener on the other side. “We’re always looking at her saying, I want that. Why can’t I have that? But you don’t know the prices [those things] come with. You don’t know the struggles that [people are] going home with every day just because on the ’Gram it looks good. People are going home, feeling depressed, popping pills, doing all kinds of s—. You don’t know! So my thing is being satisfied with what you have, because what you have is meant for you. That’s what I’ve been learning in life, and that’s what I’m learning from my character.”

In May at the celebrity-filled Met Gala, a black-tie extravaganza that raises funds for the Metropolitan Museum of Art’s Costume Institute, Anthony shut the entire place down. Wearing a Thai Nguyen Atelier gown with a high neck and Lorraine Schwartz jewels, Anthony stepped out solo and stunted on everyone.

She captioned her Instagram photo with one word: Unbreakable. “The Met Gala was a moment for me. I didn’t expect it to be all that big of a moment, but it was such an amazing feeling, just being there,” she said. “I went alone this year … and to have such love, and such great feedback … I loved it.”

Alani Nicole Vazquez was born in Brooklyn, New York, almost 38 years ago. She started out as a popular radio DJ, and in 2001 she became one of MTV’s go-to veejays as co-host of two of their most popular shows: Direct Effect and Total Request Live. That same year she had her first film cameo, in Two Can Play That Game, which starred Vivica A. Fox and Morris Chestnut. She also portrayed herself in a 2003 episode of HBO’s Sex and the City. Eventually, she dove headfirst into an acting career, determined to make Hollywood see her as more than a dope interviewer.

She met Carmelo Anthony through their mutual friend, DJ Clue, and the NBA star proposed on Christmas in 2004. Married in 2010 after being in a relationship for seven years, their son, Kiyan, is 10 years old.

Outside looking in, she has a charmed life. Anthony’s friendship circle is mighty, and filled with powerful women: Ciara, Kelly Rowland, Kim Kardashian West and tennis superstar Williams are all close friends. But the truth is, many people count Anthony as a close and trusted go-to friend.

“The Met Gala was a moment for me. I went alone this year … and to have such love and such great feedback … I loved it.”

“I had a friend yesterday, we kind of had a back-and-forth. I was like, ‘I just want you to know that I really appreciate you doing this for me.’ And they’re like, ‘Of course I’m going to do it for you!’ ”

Anthony says she has a need to make sure people understand that she doesn’t expect anything. “I’m so appreciative of anything that He does for me,” she says of her relationship with God. “My mom grew up in [Brooklyn’s] Marcy Projects — this life? The Mandarin, Oriental? This is not supposed to be my life, and for this to be what it is? I never lose sight of that, no matter how long I’ve been in business, no matter how successful I’ve been, no matter how much money I’ve made. I never lose sight of that, because this wasn’t the plan. And because of that, I’m so grateful for anything in my life that I work really hard for.”

On her birthday this year, June 25, Power premieres. The coincidence isn’t lost on her that on the date she was born her career enters a new phase. She now is a principal character on the series, and this season LaKeisha’s arc is essential to the story. This is the first time Anthony has been a principal member of any cast. She’s an actor, not a vanity thrill-seeker who wants to do side projects when simply being famous isn’t enough. This is who she really is. It’s who she’s aspired to be for so long. And finally, she says, people are getting it.

Anthony is also invested in producing great work. She co-produced 2015’s Eclipsed, an all-black, all-female play that was penned by actress and playwright Danai Gurira and ran off-Broadway at New York City’s Public Theater. It featured Oscar winner Lupita Nyong’o and was that theater’s fastest-selling new production in recent history. It later moved to Broadway at the John Golden Theatre in 2016.

Anthony also has an overall deal with iTV, one of the largest production companies in the U.S., and she’s gearing up to produce a bunch of nonscripted television, including a show on VH1 she’s doing with music producer Timbaland called Goal Diggers, which centers on women becoming entrepreneurs. “The purpose of a show like that is female empowerment,” she says between nibbles of eggs, avocado and turkey bacon. “You can start somewhere and become something else. You can be an Instagram model who seems [a certain] way, and now you’ve got a business. It goes back to … not putting people in boxes. If I’d continued to be put in a box, I’d still be La La from MTV, or La La who’s on the radio with Ludacris. And that would still be who I am, but I broke out of that. I can do other things.”

“We have to learn how to focus on putting us first. In my life, I spent so much time putting everyone else before me that I didn’t realize how much I was lacking in things that I needed for myself. And when you have a child, that is a very hard thing to do, because my son is my world. When you’re in relationships or marriage, it’s hard to do,” she says. “I’m learning to put my needs first. Because if I’m great, then I can be great for everyone else in my life. That’s a hard thing to do. When you’re a nurturer, you’re always worried about taking care of everyone else. ‘I don’t care about how I’m doing. I want to make sure you’re OK. Are you OK? Do you need anything?’ It’s something I want women to continue to work on, to learn.”

And don’t think the tweets and Instagram comments are being missed by her. She sees them, and the supportive ones warm her heart. “I feel the love in a time when I do need it, and that’s appreciated,” says Anthony. “ It doesn’t go unnoticed. It keeps me going, through tough times. It means a lot to me.”