In the matchup of the youngest black starting quarterbacks of the Super Bowl era, Lamar Jackson outdueled Kyler Murray to lead the Baltimore Ravens to a 23-17 victory over the visiting Arizona Cardinals on Sunday.

Jackson passed for 272 yards and two touchdowns and also added 120 yards rushing. The second-year passer has led Baltimore to a 2-0 start. Murray, the first overall pick in the 2019 NFL draft, had 349 yards passing for the Cardinals, who dropped to 0-1-1.

In honor of their showdown, here’s a look at some other notable matchups of black quarterbacks in NFL history.

Michael Vick ran for 173 yards, including a 46-yard touchdown in overtime to help the Falcons defeat the Vikings in the first of two career matchups with Daunte Culpepper. It was the longest touchdown run of Vick’s career. What’s more, Vick’s 173 rushing yards are still the most by a quarterback in a regular-season game. Colin Kaepernick, while playing for the San Francisco 49ers, ran for 181 yards in an NFC divisional playoff game against the Green Bay Packers in 2012. 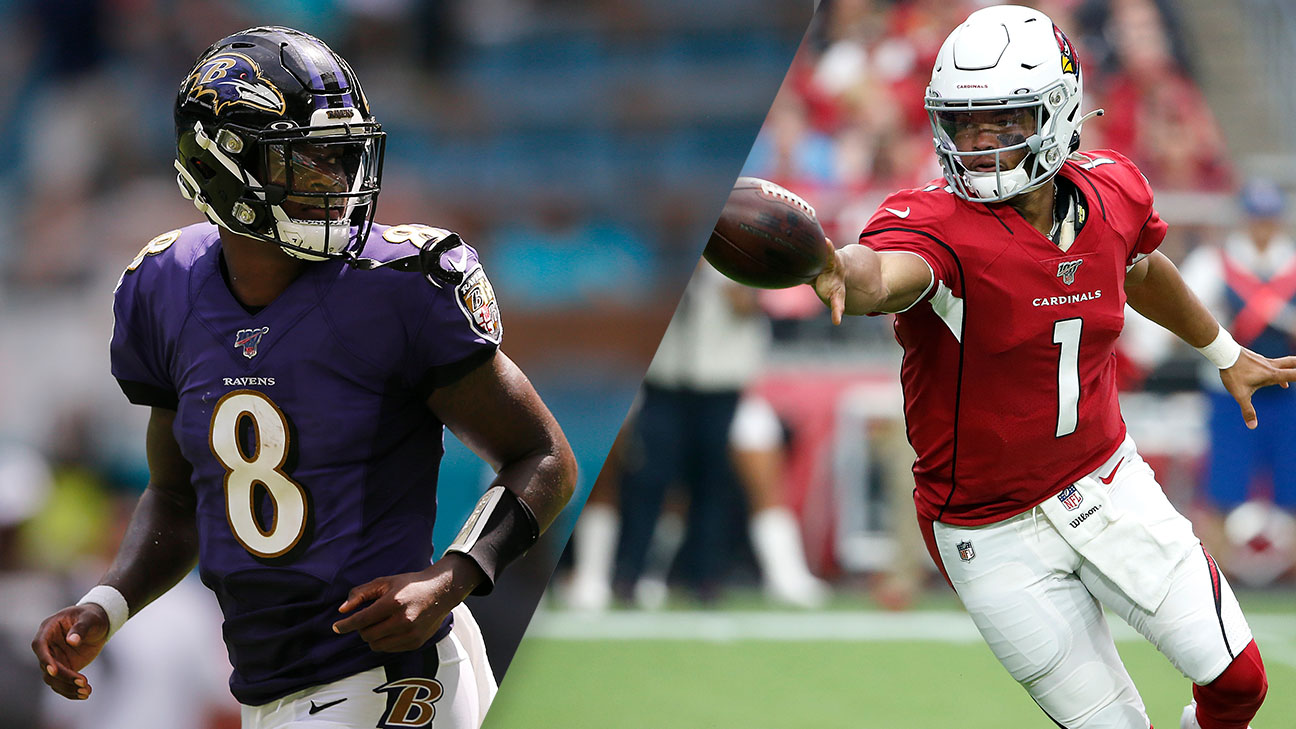 Why Lamar Jackson vs. Kyler Murray is a matchup for the ages Read now

Vick’s best career performance came on Monday Night Football in 2010 against his former teammate, Donovan McNabb, and the Washington Redskins. Vick threw an 88-yard touchdown to DeSean Jackson on the game’s first play and scored three touchdowns in the first 10 minutes! Vick became the first player in league history with 300 passing yards and four touchdown passes along with 50 rushing yards and two touchdown runs in a game. “I’ve had some great games in my day,” Vick said. “But I don’t think I’ve had one quite like this one.”

Finally, Cam Newton broke through after losing his first four matchups against Russell Wilson. Trailing by nine points in the fourth quarter on the road, Newton, who would go on to win the NFL MVP award that season, led Carolina on back-to-back 80-yard touchdown drives. With only 32 seconds remaining in the final quarter, Newton capped the comeback with a touchdown pass to Greg Olsen. In the quarter, Newton completed 12 of 15 passes for 162 yards. The Panthers improved to 5-0 and would go on to win their first 14 games of the season. They lost to the Denver Broncos in the Super Bowl.

This was the first game featuring two black starting quarterbacks in NFL history. Neither passer had a big day statistically — but there was drama. In the fourth quarter, Vince Evans helped the Chicago Bears take the lead on a touchdown pass to Walter Peyton. Then Doug Williams countered, connecting on a touchdown pass to help Tampa Bay remain undefeated.

This was the first time starting black quarterbacks faced off in a conference championship game. In frigid Philadelphia weather (zero degrees and 35 mph wind gusts), Donovan McNabb threw two touchdown passes and had no interceptions in outdueling Vick.

Despite playing the second half without wide receiver Randy Moss, Daunte Culpepper passed for 425 yards and five touchdowns. It was Culpepper’s third game with five touchdown passes on the season, establishing an NFL record.