In what apparently has developed into an epic two-man race for the NFL’s top individual honor, quarterback Lamar Jackson overcame awful weather and his first lost fumble of the season to lead the surging Baltimore Ravens to a 20-17 victory over the formidable San Francisco 49ers.

Facing fourth-and-1 from the Ravens’ 44-yard line late in the fourth quarter, Jackson rushed for three yards to extend the game-winning drive, which was capped on place kicker Justin Tucker’s 49-yard field goal. Despite not meeting his high standards (“Horrible. I was throwing passes behind my receivers,” Jackson said), Jackson clearly strengthened his candidacy for the Associated Press Most Valuable Player Award.

Wilson, the Seattle Seahawks’ veteran superstar passer, will try to keep pace against the Minnesota Vikings on Monday Night Football. But even when he’s not at his best, Jackson is a tough act to follow in the top battle in the Year of the Black Quarterback.

“This is the NFL, so each and every game, you’re going to go in prepared, ready for a dogfight,” said Jackson, who entered the postgame news conference wearing a T-shirt that read, “Nobody cares. Work harder.”

“This one here, it was a dogfight that came down to fourth down [and a] field goal. We were ready. But at the same time, you’ve got to be ready each and every game, because you don’t know what [will] happen.”

These days, the Ravens enter every game believing they know exactly what will happen: They’ll win by following Jackson.

He’s the talk of the league, as much for his ankle-breaking athleticism (more on that momentarily) as – and here’s the shocker for the teams who passed on him in the 2018 NFL draft – his efficiency passing. Jackson entered the game first in the NFL in QBR and tied with Wilson for tops in touchdown passes. And to think many talking heads said Jackson would probably be a better fit at wide receiver or running back.

In case anyone hasn’t been paying attention, the man is clearly a quarterback, 49ers veteran cornerback Richard Sherman said. And one who’s a game-changer.

“You’re happy the kid is getting his just due because he’s playing at a high level.”

Jackson has amassed an impressive ledger.

In head-to-head matchups this season, he has already defeated Wilson, New England Patriots quarterback Tom Brady and Houston Texans standout signal-caller Deshaun Watson, as well as the 49ers, who lead the NFC West (Seattle could pull into a tie atop the division on Monday) and are vying for the league’s best record. Against the league’s No. 1 overall defense statistically on Sunday, Jackson passed for one touchdown, ran for another and established a record for quarterbacks by rushing for at least 100 yards (101) for the fourth time in 2019. With 977 yards rushing this season, Jackson needs only 63 yards to break the single-season record for passers set by Michael Vick in 2006. He also turned 49ers nickelback K’Waun Williams into a GIF. 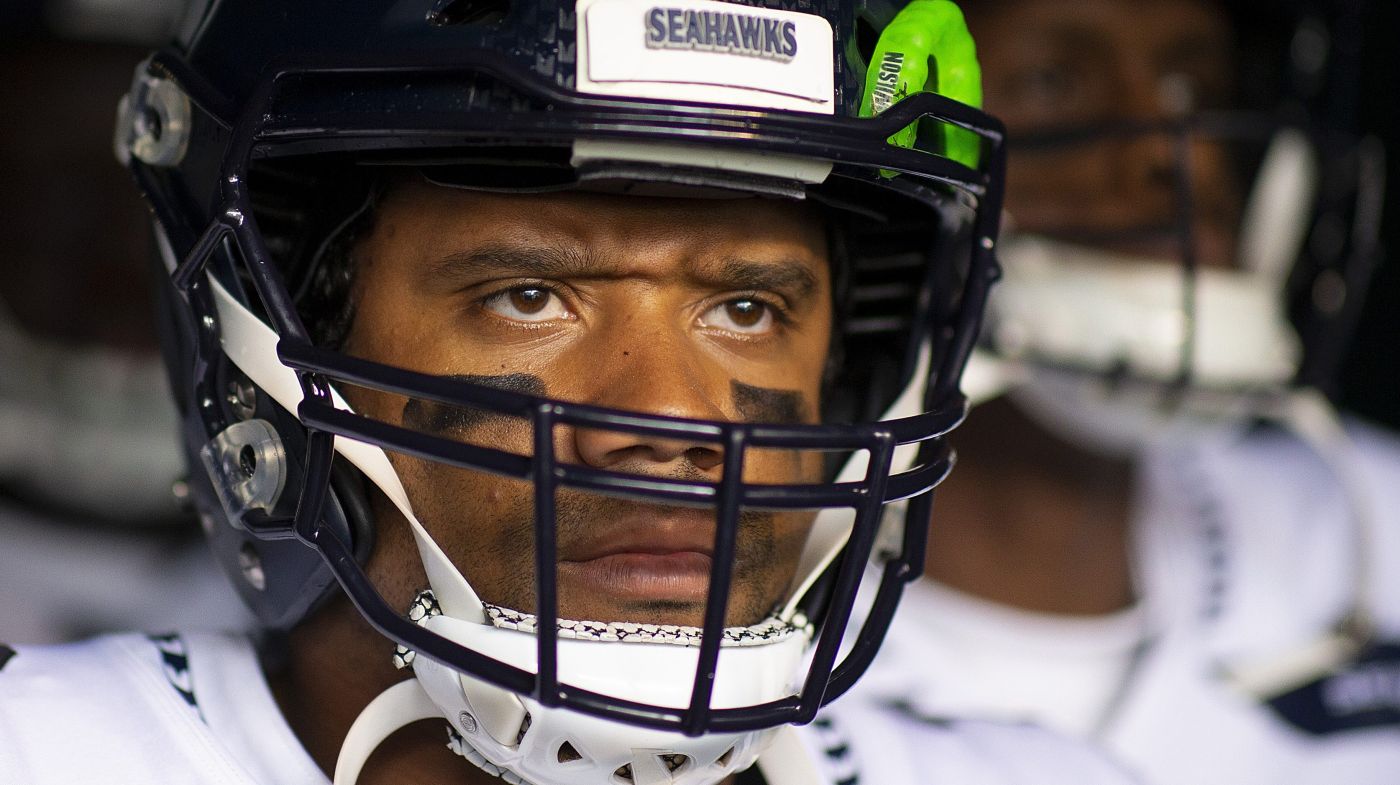 Early in the second quarter, Jackson juked Williams on a designed run. Williams went sliding in the opposite direction and fell down as Jackson gained seven yards around right end. Jackson punctuated the drive with his seventh rushing touchdown. It’s just what Jackson does.

“I’ve got to make a guy miss,” Jackson said. “I’m trying to get positive yards, each and every play. I’m trying to make something happen. I just had to go.”

Jackson, however, was more focused on his fumble early in the third.

He gained 20 yards around left end to the 49ers’ 34-yard line. But San Francisco backup safety Marcell Harris surprised Jackson on the tackle, ripping the ball from him as he pulled Jackson down. Unacceptable, Jackson said.

“It was my fault, so I’m hot about that right now,” Jackson said during the presser. “If I keep the ball in my hand … we’re going to score. That drive had a lot of success going on. But that one play … it stopped us.”

Way back in 2012, when he was Washington’s offensive coordinator, San Francisco head coach Kyle Shanahan designed an offense that helped Robert Griffin III, Jackson’s similarly athletic backup, enjoy a spectacular rookie season. Highly impressed by what he had observed of Jackson on film, Shanahan saw nothing at M&T Bank Stadium to alter his opinion.

“We had to change some stuff up [to contend with Jackson],” Shanahan said. “Anytime you’ve got to play 11-on-11 football, you can’t just do what you’ve been doing.”

The rest of the league can relate.

Although Jackson still has much room for growth in the dropback passing game, he’s dominating the league from the pistol formation. The Ravens are a formidable bunch on both offense and defense, looking like a leading Super Bowl contender with four games remaining in the regular season.

And their 22-year-old leader, who some once said wasn’t good enough for this gig, believes the Ravens are still rising. “We’re just a strong team,” Jackson said. “A team [that’s] hard to be beat.”

Wilson also leads a Super Bowl contender. The sprint to the finish between the two quarterbacks should be so much fun.