On the 20th anniversary of an iconic Game 6, six facts about the ‘Last Shot’ Air Jordan 14s

Was the XIV gang-related? Was the sneaker patented? We have answers

It was a missed shot, not just the most revered game-winner of Michael Jordan’s career, that made the Air Jordan 14 iconic. It began with the final play in Game 5 of the 1998 NBA Finals between the Chicago Bulls and Utah Jazz. With 0.8 seconds remaining on the clock and the Bulls trailing 83-81, head coach Phil Jackson drew up a play to get the ball into the hands of the greatest of all time. A 2-pointer would tie the game and force overtime. Yet, with Chicago leading the series 3-1, a make from beyond the 3-point arc would mean a victory and a championship. Of course, Jordan was going for the win.

The referee handed the ball to the inbounder, Ron Harper, which triggered His Airness to employ an explosive burst from the free-throw line to the sideline. Harper tossed the ball in, and a swift, one-motion move became a 35-foot, off-balance heave. The potential game-winning 3 fell about a foot short, as Jordan landed back on the hardwood in a pair of his signature Air Jordan 13s.

The air ball extended the series to a Game 6 at the Delta Center in Salt Lake City, where Jordan wouldn’t miss in crunch time this time around. With 5.2 seconds left in the game, Jordan put a helluva (albeit controversial) move on his defender, Utah’s Bryon Russell, and drained a 20-foot jump shot from the top of the key to give the Bulls an 87-86 lead that would deliver their sixth championship in eight seasons. By January 1999, Jordan would retire for the second time in his career, making the heroic Game 6 jumper his final shot as a member of the Bulls. (Jordan came out of retirement in 2001 to play two seasons for the Washington Wizards.) The ending of the ‘98 Finals also cemented a legacy for the shoes he wore in that moment: a pair of Air Jordan 14s, which have since taken on the nickname “Last Shot.” Had Jordan hit the 3-pointer to win it all in Game 5, the 13s, not the 14s, would’ve become “Last Shot” Air Jordans. But both the basketball and sneaker gods had other plans. In honor of the 20-year anniversary of Game 6, here are six facts about the timeless “Last Shot” Air Jordan 14s.

Had Michael Jordan hit the 3-pointer to win it all in Game 5, the 13s, not the 14s, would’ve become “Last Shot” Air Jordans.

Jordan only wore the 14s in three games

Jordan opened the 1998 Finals on the road in Game 1 against the Jazz in the “Bred” Air Jordan 13s. He began Game 2 in a black and red pair of player-exclusive, low-top 13s (which would never release at retail) before switching back to the traditional mid-top version of the shoe after halftime. In Games 3, 4 and 6, he’d don the Air Jordan 14. Because, if you remember, in Game 5 he returned to the 13 and broke out the “Playoffs” colorway. By the time of his debut with the Wizards in ‘01, he’d be rocking the “College Blue” Air Jordan 17s.

The shoe was inspired by Michael Jordan’s Ferrari

On Oct. 27, 1998, a few days before the commercial release of the sneakers that debuted on the court months earlier in the Finals, The Associated Press reported that designer Tinker Hatfield was influenced by the luxury cars Jordan owned, particularly his Ferrari 550 Maranello, when crafting the Air Jordan 14. “He told us directly that we should be looking at automobiles,” Hatfield, Nike’s vice president for design and special projects, told The Associated Press. “He actually suggested that I come out and look at his Ferrari, just to be inspired by it.” Hatfield’s clean and simple design of the 14 includes an air-intake pocket similar to what was found on a Maranello in the late ’90s, as well as the same type of paint and bumper materials implemented in high-end vehicles of that era. The shoes dropped at retail for $150 a pair on Halloween 1998 in a “Candy Cane” white-and-red colorway. The “Last Shot” black-and-red model that Jordan wore in the ‘98 Finals wouldn’t hit stores until March 1999.

The shoe was awarded a landmark patent

According to The Associated Press, the United States Patent and Trademark Office presented Nike with patent No. 400,000 in the governmental agency’s then-(ironically)-23-year history for the sports car-inspired elements incorporated into the Air Jordan 14. A news conference was held to celebrate the occasion.

In December 1998, less than two months after the Air Jordan 14 went on sale, Dallas-based shoe retailer Footaction (acquired by Foot Locker in 2004) unveiled a list of the top 100 athletic shoes of all time. At No. 82 sat the 14, which checked in ahead of notable sneakers such as the Air Jordan 8, the Converse Jack Purcell and the Adidas Powerphase. It’s a testament to how much of an impact the shoes — and the epic shot the greatest of all time made in them — had in the early days of their release, without Jordan even playing in the NBA. It didn’t take long for the 14 to reach cult classic status.

“Michael Jordan, the Jordan Brand and Nike condemn violence and vigorously assert that any Jordan brand product and, specifically, the Air Jordan XIV has no connection to any gang or gang-related activity and is intended for use as a basketball product.” — Statement released in 1999

“Nike has learned from local police departments and school administrators that the Roman numeral ‘XIV’ on this year’s Air Jordan is coincidentally associated by some with a gang based in Northern California. Michael Jordan, the Jordan Brand and Nike condemn violence and vigorously assert that any Jordan brand product and, specifically, the Air Jordan XIV has no connection to any gang or gang-related activity and is intended for use as a basketball product.”

This is an excerpt from a statement released on March 26, 1999, denying any link between the shoe and the Norteños street gangs, which use the No. 14 and Roman numerals XIV as a representation of the 14th letter in the alphabet, “N,” to pay tribute to the Mexican-American organization of prison gangs known as Nuestra Familia. 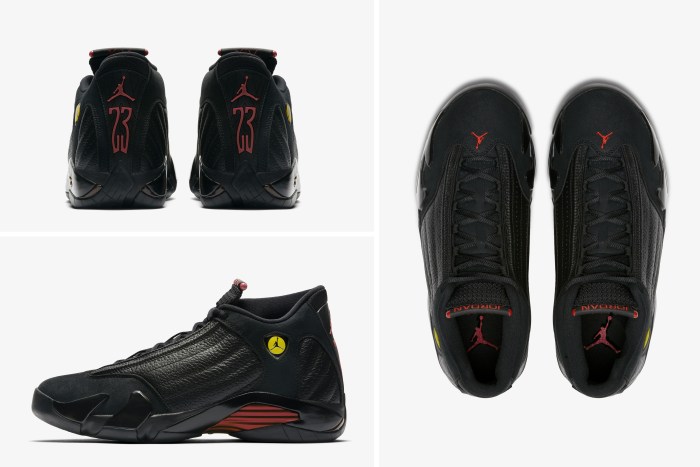 Since the shoe’s original release in 1999, the “Last Shot” Air Jordan 15 has been retroed on three separate occasions: in 2005 for $130, in 2011 for $160 and on Wednesday, in celebration of 20 years since Jordan’s jumper, for $190, as part of Nike’s Art of a Champion collection. Moral of the story: Every sneakerhead’s closet deserves a pair of the Last Shots.