The Big Baller launches his Junior Basketball Association, but at what cost?

ATLANTA — Sweet-shooting wing Gregory Floyd lost his NCAA Division I scholarship offers when his grades nose-dived after the death of his sister. Bruising big man Nate Morris was kicked off the University of Mississippi team after arrests for DUI and speeding. Explosive athlete Nyang Wek was expelled from high school midway through his senior season.

These are the type of stories populating the Junior Basketball Association (JBA), LaVar Ball’s new eight-team pro league that aims to bypass college hoops and open another door to the NBA.

When Ball proposed the league, I wrote that it was a bad idea because most of the players would be better off, long term, using hoops to get a college education. But I didn’t realize that so many of Ball’s recruits would have so few college options. After seeing the league up close and talking to players, it seems admirable that Ball is providing a last chance for young men to keep their hoop dreams alive. And it’s impressive that a dude who built his brand spouting mountains of fantastical nonsense has created something unprecedented and real.

But what will ultimately happen to the majority of the JBA’s 64 young hoopers, almost all of them African-American? How many will finish their playing careers in some dingy overseas gym, with little savings and no education? How many high school kids with weak handles and broke jump shots will skip studying as they chase a $3,000-per-month JBA contract?

I asked Ball for answers when he brought his show to Atlanta.

The JBA played two games Tuesday in the 13,000-seat Infinite Energy Center. The rules are the same as the NBA, with a distant 3-point line, 24-second shot clock and 12-minute quarters. Ball sat courtside next to his son Lonzo, who plays for the Los Angeles Lakers for the moment, and his son LiAngelo, who was pulled out of UCLA and is now, uhhh, between jobs. On the floor was Ball’s third son, LaMelo. He’s the face of the eight-team league, hoisting 30 to 40 shots a game for the Los Angeles squad.

LaMelo, who turns 17 in August, is one of the youngest players in a league full of guys a year or three removed from high school. He’s a high-talent player with excellent open-court ability, deep but low-percentage range and NBA potential. He also has atrocious defensive habits that no normal coach would tolerate, and he hasn’t yet developed the level of court vision or explosive athleticism that Lonzo Ball had at his age.

But whatever. LaMelo’s fame, created by LaVar Ball’s boasts and fueled by their Facebook reality show, draws eyeballs to the JBA. All league games are broadcast on Facebook, where most have between 100,000 and 200,000 views. LaMelo’s games have closer to 800,000. Those numbers are a stark contrast with the sparse crowd in Atlanta. I counted fewer than 300 people in the stands, where tickets started at $39 (no surprise given that Big Baller sneakers cost $495) plus another 100 heads in the $99 courtside seats.

All the empty seats are, whatever. Just ask Alan Foster, co-owner of the JBA.

“What’s happening on this court, that’s cute and all. But that content up there?” said Foster, pointing to the video feed on the giant scoreboard. “That stuff on your phone? That’s what we’re talking about.

“It’s the content that we’re capturing,” he said, claiming views of more than a million per game and rattling off the brand names of potential Fortune 500 advertisers. “The experience for the viewers is what it’s about.”

“What’s happening on this court, that’s cute and all. But that content up there?” said Foster, pointing to the video feed on the giant scoreboard. “That stuff on your phone? That’s what we’re talking about.”

The players, though, create the content. Ball wants the best high school athletes, the sure-shot one-and-dones, to choose the JBA over playing in college for (supposedly) no money. Right now, though, his best players are the likes of Floyd and Morris: solid, with some tools, but light-years from the NBA.

Floyd, 19, runs with LaMelo for Los Angeles. He collected 25 points and 15 rebounds in the 122-110 loss to Dallas, second to LaMelo’s 40 points — the baby Ball made just 11 of 32 shots, including 3 of 13 from 3-point range, plus 15 free throws. Floyd is a skinny 6 feet, 8 inches with a nice 3-point stroke. He was in high school in Las Vegas, with scholarship offers on deck from New Orleans and Cal State-Bakersfield, when his 24-year-old sister died of sudden health problems.

“I lost focus,” Floyd told me, staring at the floor throughout our conversation. “I wasn’t really a high school kid. Sitting there in class, I was falling asleep. Senior year just messing ’round. Going to juco, doing good first semester, got bored of the school stuff after the season was over. Then this league came along.”

His goal is to make the NBA, or at least play overseas, then “I guess get into coaching.” His first biweekly check, for $1,178 after taxes, went mostly for “clothes and snacks.”

I asked why he didn’t think college was a good idea.

“If the kids are good at basketball, they should be playing basketball as a career,” Floyd said. “Like LaVar says, you don’t need to know two plus two to shoot a basketball. That’s what I believe.”

“If the kids are good at basketball, they should be playing basketball as a career,” Floyd said. “Like LaVar says, you don’t need to know two plus two to shoot a basketball. That’s what I believe.”

Born in South Sudan, Wek’s mother fled violence there and was granted refugee status in America when Wek was 9. His father is deceased. He played high school ball in French Camp, Mississippi, population 194, but was kicked out during his senior basketball season “due to dating a girl who was a different race than me.” Wek moved to Memphis, Tennessee, finished high school and got a football scholarship to Lane College, a Division II historically black college. But he left Lane after a season because “I just didn’t think football was for me,” then moved to Dallas, where he was holding down a job delivering plumbing supplies when his girlfriend sent him a Twitter link to the JBA tryout information.

Now here, Wek was in Atlanta, 20 years old, hammering down dunks on his way to 17 points and nine boards.

I asked how he’s spending his salary. “I’m looking into a lot of investments,” Wek said. He wants to make the NBA, but realistically, that goal is further away than his homeland.

If hoops doesn’t pan out, “I’m considering taking online classes, to get my education. Because that’s really what my mom brought me here for.”

After the games ended, LaVar Ball posed for pictures and signed autographs for a stream of eager fans, then spoke to me on the court while his reality show cameras rolled.

I told him I thought the league could discourage kids from getting an education — kids who had no chance of making any real money as pros.

“If you’ve been playing basketball all your life, you want to get on that platform. You think you’re a pro? Come to this league,” Ball responded. “Now, if you don’t have no more eligibility and all that, that’s fine too. You still can go back to school.”

But you’d have to pay for an education you could have gotten for free.

Ball had a point — players don’t get a free education. They trade their labor for it, labor that generates billions of dollars, while their compensation is limited to the cost of tuition, room, board and expenses. At a time when the hypocrisy of big-time college sports is becoming all too obvious, Ball has found a pressure point.

Ball says all eight players on the JBA championship team will get a new car. He says he’ll take the 10 best guys from the league on a European tour to showcase their talents. He says he’ll pay top-ranked recruits $10,000, $20,000, $50,000 a month, plus 60 percent of their jersey sales. He claimed all the best players will come to the JBA instead of college or the G League “because I’m the Big Baller, and they don’t know who the boss is in the G League. Because my league is real. These dudes are going to come through this lane. They going to be like, ‘Man, he so genuine. That’s who I want to play for.’ ”

But Ball also says that if a player isn’t pro-ready, he’ll send him home from his league with a quickness. He doesn’t mention they’ll no longer have any college eligibility.

“If you’ve been playing basketball all your life, you want to get on that platform. You think you’re a pro? Come to this league,” Ball responded. “Now, if you don’t have no more eligibility and all that, that’s fine, too. You still can go back to school.”

I asked if such players wouldn’t have been better off using basketball to get a degree. That’s when Ball went into his signature “Neva Lost” mode: talking loud and fast but not making much sense.

“College is good or bad. It’s just how you look at it,” Ball said along the way. “Some people, maybe you just want to be a security guard. What are you going to school for for that? Take the little class you got to carry your little card or whatever, get your little flashlight and then be a security guard at the mall. You don’t need to go get no degree for that. I know a lot of folks with a lot of degrees that don’t have jobs.” 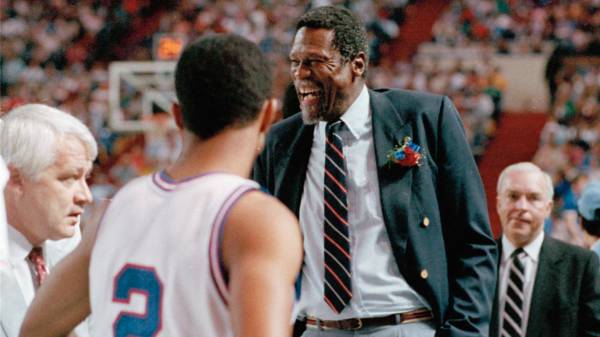 Ball, who attended three colleges on basketball scholarships, is not at all stupid. He simply values sports over education, like most Americans do — especially in the black community. Why graduate your kids from UCLA, one of America’s best universities, when they can hoop for money? This is Ball’s calculus behind the Junior Basketball Association. He knows he has enough hustle and grind and scraps of truth to make it all add up.

I expect the JBA to return next summer with more and better players, more hype, more views. If the NBA eliminates the rule requiring athletes to play a year in college before getting drafted, Ball will sign kids before they graduate from high school. He knows there’s a never-ending supply of black boys who will trade 10 years of their lives for a lottery-odds shot at the NBA.

Next to the alchemy of basketball and LaVar Ball, college doesn’t stand a chance.