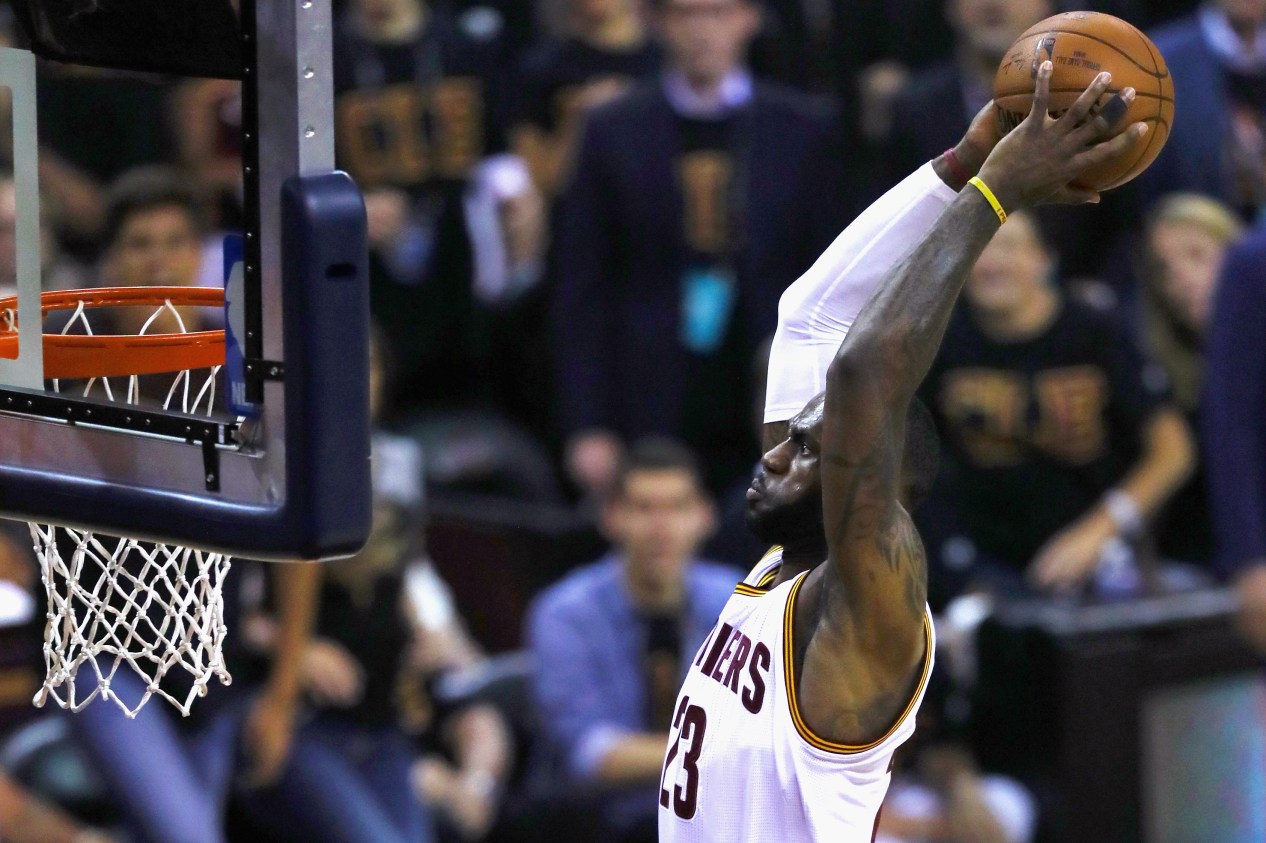 CLEVELAND, OH – JUNE 16: LeBron James #23 of the Cleveland Cavaliers goes up for a dunk in the first quarter against the Golden State Warriors in Game 6 of the 2016 NBA Finals at Quicken Loans Arena on June 16, 2016 in Cleveland, Ohio. NOTE TO USER: User expressly acknowledges and agrees that, by downloading and or using this photograph, User is consenting to the terms and conditions of the Getty Images License Agreement. (Photo by Ezra Shaw/Getty Images)

LeBron is already one of the best of his generation

“Comparison is the thief of joy.” – Theodore Roosevelt

Teddy was lucky sports talk radio didn’t blow up in 1900.

I’m not going to say if LeBron James wins Sunday night he will retire as the greatest basketball player of all time, mostly because Michael Jordan’s ego will not survive if his game is ever referred to as, “Bron-esque.”

That kind of Superman-vs.-Mighty Mouse sports argument serves no one. Besides, it’s intellectually lazy to zero in on what a future Hall of Fame player can’t do.

What James can do, though, if he and the Cleveland Cavaliers scale Mt. Oracle and the suddenly stupefied Golden State Warriors, is cement his legacy as the greatest player of his generation – and then some.

Since 1980, a handful of players have won three or more championships as the outright MVP or co-MVP of their teams: Magic Johnson, Larry Bird, Michael Jordan, Shaquille O’Neal, Kobe Bryant and Tim Duncan. I’ll throw Dwyane Wade and Scottie Pippen in there because James has yet to win it all without Wade and Jordan never won it all without Pippen.

A victory Sunday night for his third title vaults James easily into the top five.

Here’s what puts him in the top 10 even before Sunday night’s game: Only Bird ever forced a Game 7 in a series in which his team trailed 3 games to 1. If the Cavs win, James becomes the first player in history to pull off that comeback in the Finals. The collective record for teams down 3-1 in the Finals is 0-32.

Not even Jerry West’s Los Angeles Lakers, facing the Boston Celtics in 1966, could recover from a 3-1 hole.

James’ back-to-back, 40-plus point virtuosos in Games 5 and 6 of the series – the first in the Finals since O’Neal emasculated the Indiana Pacers’ frontline in 2000 – have been described as his finest moments in the crucible.

I disagree. In Game 6 of the 2012 Eastern Conference finals at Boston, the Miami Heat faced certain elimination and further humiliation. Up 3-2, the Celtics were poised to pour salt in the wound of the man who two years before had told America he was taking his “talents to South Beach” before he told his current employer, the Cavs, or his fellow native Northeast Ohioans.

Backed into a corner, his legacy on the ledge, James erupted for 45 points, 15 rebounds and five assists in the signature performance of his career on the way to his first championship.

The next time James’ team was down 3-2 in a series a year later, Ray Allen bailed the Heat out with a last-second 3-pointer to send Game 6 into overtime. James then finished off the San Antonio Spurs in Game 7, making all the right plays and big shots late in the game.

James is 3-2 in Game 7s over his career. Jordan was 2-1. And he never had to face the ultimate challenge of a Finals Game 7, though he should have in 1998 when referee Dick Bavetta failed to call him for a push-off against Bryon Russell. (OK, he still had to make the shot.)

When you throw in the fact that no road team has won a Game 7 in the Finals since Wes Unseld and the Washington Bullets at Seattle in 1978 …When you throw in the fact that Stephen Curry, Klay Thompson and the rest of the fait accompli Golden State Warriors, the greatest regular season team in league annals, have not lost three games in a row all season … Then James willing Believeland to its first major sports championship in 52 years in such pulsating fashion would vault him not just onto the Mount Rushmore of greatest of all time but …

I promised not to say it. It’s always been heresy – even when now-retired Los Angeles Laker Kobe Bryant was in his prime.

But this is where it gets bigger than basketball:

After all the sports agony in Curse City, taking Cleveland to the title would arguably be greater than any accomplishment by a modern-era athlete.

The Chicago Cubs ending their century-plus drought one of these years will be a great story. But Chicago is already a great city with championships in every big-revenue sport over the past three decades.

Between the The Shot, The Fumble, The Drive and, for a time, The Decision, Cleveland just has this Schleprockian history. If, in Jim Brown’s lifetime, James could pull this off, the entire city would be galvanized in an unimaginable way. Is it the New Orleans Saints after Hurricane Katrina? No. But an argument could be made that what a sports title could do for the psyche of that town would be so grand that James would be catapulted into a pantheon of remarkable sports figures beyond the NBA.

My friend Justin Tinsley, an admitted ‘Bron backer, calls him a “mixture of [Muhammad] Ali’s sense of world view and sense of self, Jim Brown’s strength and dominance, Kareem [Abdul-Jabbar]’s durability and the overall basketball know-how of an Avenger.”

We both agree he already has established himself as the greatest player since Michael Jordan. A win Sunday night and comparison will be the thief of nothing but Jordan’s ego.