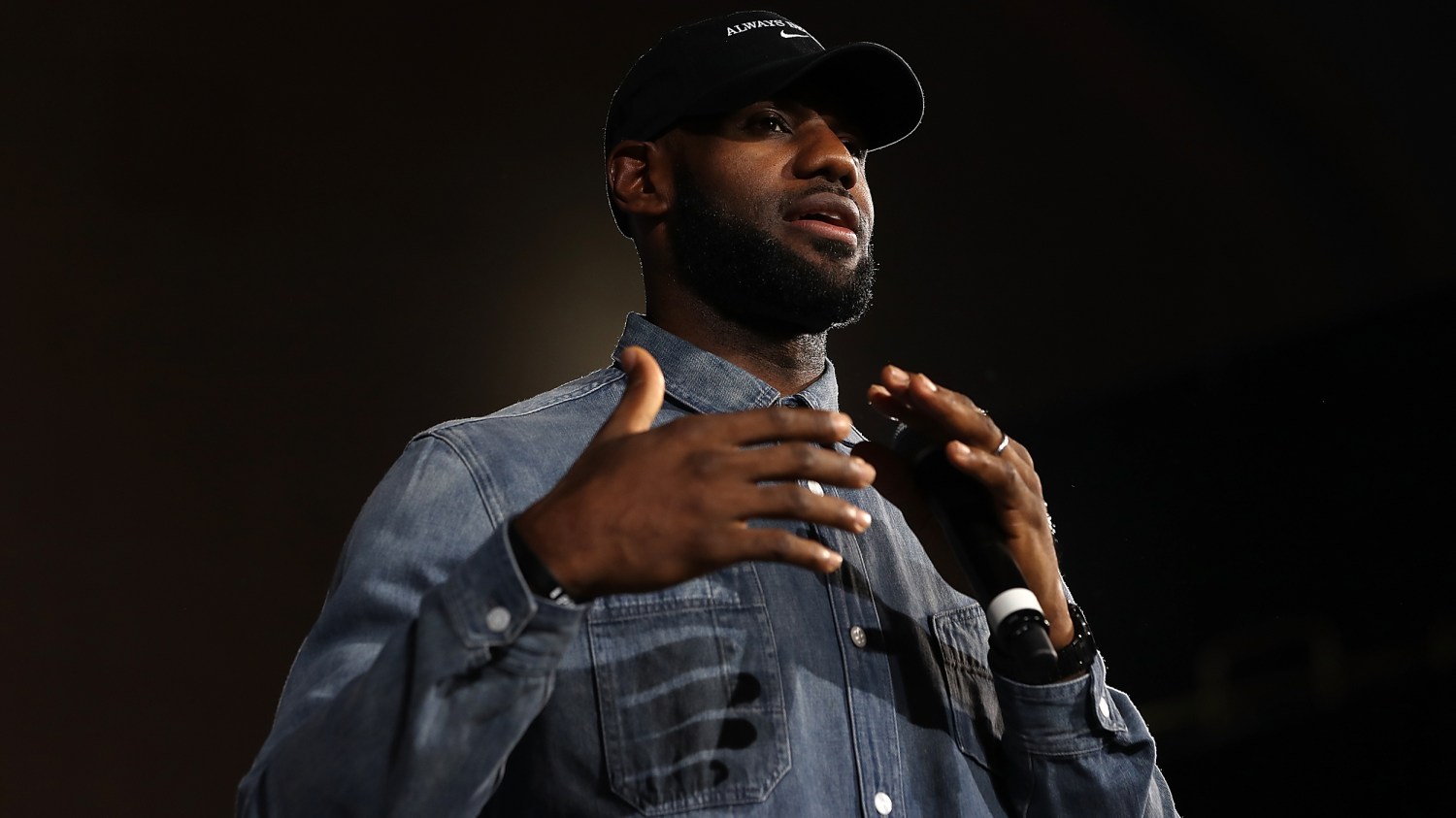 LeBron James speaks during a campaign rally with Democratic presidential nominee former Secretary of State Hillary Clinton at the Cleveland Public Auditorium on November 6, 2016 in Cleveland, Ohio. With two days to go until election day, Hillary Clinton is campaigning in Florida and Pennsylvania. Justin Sullivan/Getty Images

LeBron James and the battle with two presidents

Everything’s bigger in New York, including LeBron’s beefs with Donald Trump and Phil Jackson. And, oh, yeah, the Knicks

LeBron James has had several rivals in his career: Paul Pierce and the Boston Celtics, Joakim Noah and the Chicago Bulls, Paul George and the Indiana Pacers, Tim Duncan and San Antonio Spurs and, most recently, Stephen Curry and the Golden State Warriors.

Yet, within the last several weeks, his most unorthodox antagonist has been brewing: President-elect Donald Trump. Here’s a brief timeline:

Oct. 2 — James takes to Business Insider to officially endorse Democratic presidential candidate Hillary Clinton, obviously using the art of the subliminal diss perfected by friend Jay Z. He said, “Only one person running truly understands the struggles of an Akron child born into poverty. And when I think about the kinds of policies and ideas the kids in my foundation need from our government, the choice is clear.”

Oct. 12 — James responds to a leaked 2005 recording of Trump and former Today show co-host Billy Bush. It featured the future commander in chief’s now infamous remarks about women. The remarks Trump downplayed as “locker room talk.” “What is locker room talk to me? It’s not what that guy said. We don’t disrespect women in no shape or fashion in our locker room,” said the four-time MVP. “That never comes up. Obviously, I got a mother-in-law, a wife, a mom and a daughter and those conversations just don’t go on in our locker room. What that guy was saying, I don’t know what that is. That’s trash talk.”

Nov. 6 — James and teammate J.R. Smith appear on stage with Clinton at a Cleveland rally, doubling down on his Oct. 2 endorsement.

Nov. 9 — James, like many Americans the morning following the election, expressed dismay over the outcome. Taking to Instagram, with Kendrick Lamar’s Alright as the backdrop, James said, “Minorities and Women in all please know that this isn’t the end, it’s just a very challenging obstacle that we will overcome!! The man above will never put something in our paths that we can’t handle no matter how difficult it may feel/be! To all the youth out there I PROMISE I’ll continue to lead u guys every single day without no hesitation!!

Nov. 10 — James and the Cavaliers visit the White House — the same day as Trump, no less. When asked whether he would visit 1600 Pennsylvania Ave. during a Trump administration, James noted he’d cross that bridge if he were lucky enough to capture a fourth title.

“To all the youth out there I PROMISE I’ll continue to lead u guys every single day without no hesitation!!”

On Monday, reports confirmed that James and several Cavaliers teammates choose not to stay at Manhattan’s Trump SoHo (the hotel bears Trump’s name via a licensing agreement) as they prepare for Wednesday night’s game versus the New York Knicks. The Cavs have a contract with the establishment, but the players have been excused by the Cavaliers organization. The Memphis Grizzlies, Milwaukee Bucks and Dallas Mavericks organizations have apparently made similar decisions about Trump hotels, for varying reasons, and at various times. In May, Trump did wish James “good luck” heading into his Finals rematch with the Golden State Warriors. The business baron by day and seeming political instigator/presidential candidate by hobby understood he gained to profit something far more lucrative than money from a Cavaliers championship. James’ crowning achievement would only increase excitement for his coronation a month later at the Republican Party’s national convention in Cleveland.

Nevertheless, Trump isn’t the only president currently on James’ bad side. The other is Knicks team president Phil Jackson. Jackson’s “posse” comments regarding James — not the first time he’s used the language to describe him — lit a match last month, igniting a larger conversation about race and coded language. The 11-time champion head coach said James, as a member of the Miami Heat, once wanted to stay overnight in Cleveland following a game. “You can’t hold up the whole team,” Jackson said, “because you and your mom and your posse want to spend an extra night in Cleveland.” Context was later provided for James’ request. It seems the game in question was likely near Thanksgiving 2013. He and his teammates held a holiday dinner at James’ house in Cleveland in order to avoid celebrating in a hotel conference room in Toronto.

“This is the best country in the world, so we all have to do our part. It’s not about him at all. Especially not for me and what I do.“

James took offense stemming from the word’s stigma. His so-called “posse,” his closest friends run and evolve his empire. James placed No. 11 on Forbes’ World’s 100 Highest-Paid Celebrities. Carmelo Anthony, a spokesman on social injustice in his own right, sided with his fellow 2003 draftee along with Houston Rockets’ guards James Harden and Eric Gordon, as did Detroit Pistons head coach Stan Van Gundy. In frontier times, “posse” had law enforcement connotations. It was used in the 1980s by those in the hip-hop community to describe a rapper’s friends and crew. So it essentially means, in effect, a group of black men with common interests and a singular musical purpose. But when spoken with condescension, and seeming disdain? And there’s also the timing: Why describe James, his friends and successful business associates in such a way given the time frame when black men are continuously examined, critiqued and frequently chastised under such an intense microscope?

Jackson marginally addressed the elephant in the room when probed about it by fellow Hall of Famer Lisa Leslie on CBS’ We Need To Talk. He apologized for discussing an opposing team’s personnel. Yet when it came to the point issue, the connotation of the word, Jackson offered a vague faux-apology saying, “And I just don’t understand that part of it, the word. So I guess word choice could be something I could regret.”

Asked whether Wednesday night’s matchup would feature an olive branch between the two basketball powerhouses, James shot down the idea. The comments didn’t bother him as much as they served as a reminder of society’s infrastructure. “Didn’t affect me, just know how much further we still have to go and how far we still have to go as African-Americans, even in the light of today,” James told ESPN.com’s Dave McMenamin. “I’ve built my career on and off the floor on the utmost respect, and I’ve always given the utmost respect to everyone — all my peers, people that’s laid the path for me and laid the path for coaches, players, things of that nature. I’ve always given respect to them, and it’s always, like I told you before, it’s always shade thrown on me. It means we got a lot more work to do, myself and the team.”

James’ return to Madison Square Garden, two miles from the Trump SoHo at which he canceled accommodations — is somehow Wednesday night’s least polarizing storyline. The combination of LeBron’s unmatched athletic power and influence during the prime of his career plus long history of willingness to inject his voice and actions on issues far beyond basketball place him in the delicate bubble of megastar athlete and cultural critic. Only few athletes with his combination of talent and reach have ever understood the stratosphere he currently inhales not only in pop culture, but the national conversation at large. Others? Names like Ali, Russell, Kareem, Brown and, more recently, Serena to name a handful. In simpler terms, he’s a young black man bucking against older white men. Not only for his beliefs, but also his image in a society looking more and more like him. The historical lineage of this cannot be lost merely in James’ pursuit (and increasingly very real capture) of Michael Jordan’s GOAT status or perchance a Finals rubber match with the Warriors. This precarious responsibility now deposits him in the crosshairs of a man, widely described as a loose cannon, who assumes control of United States in 45 days and arguably the greatest leader of men NBA sidelines has ever seen. And neither president of which he seems invested in backing down from anytime soon.

The last time someone entered New York with this much beef? Snoop Dogg ended up kicking buildings over in Tha Dogg Pound’s 1995 NY, NY video. Unfortunately, this time, it’s the Knicks who may suffer the most.