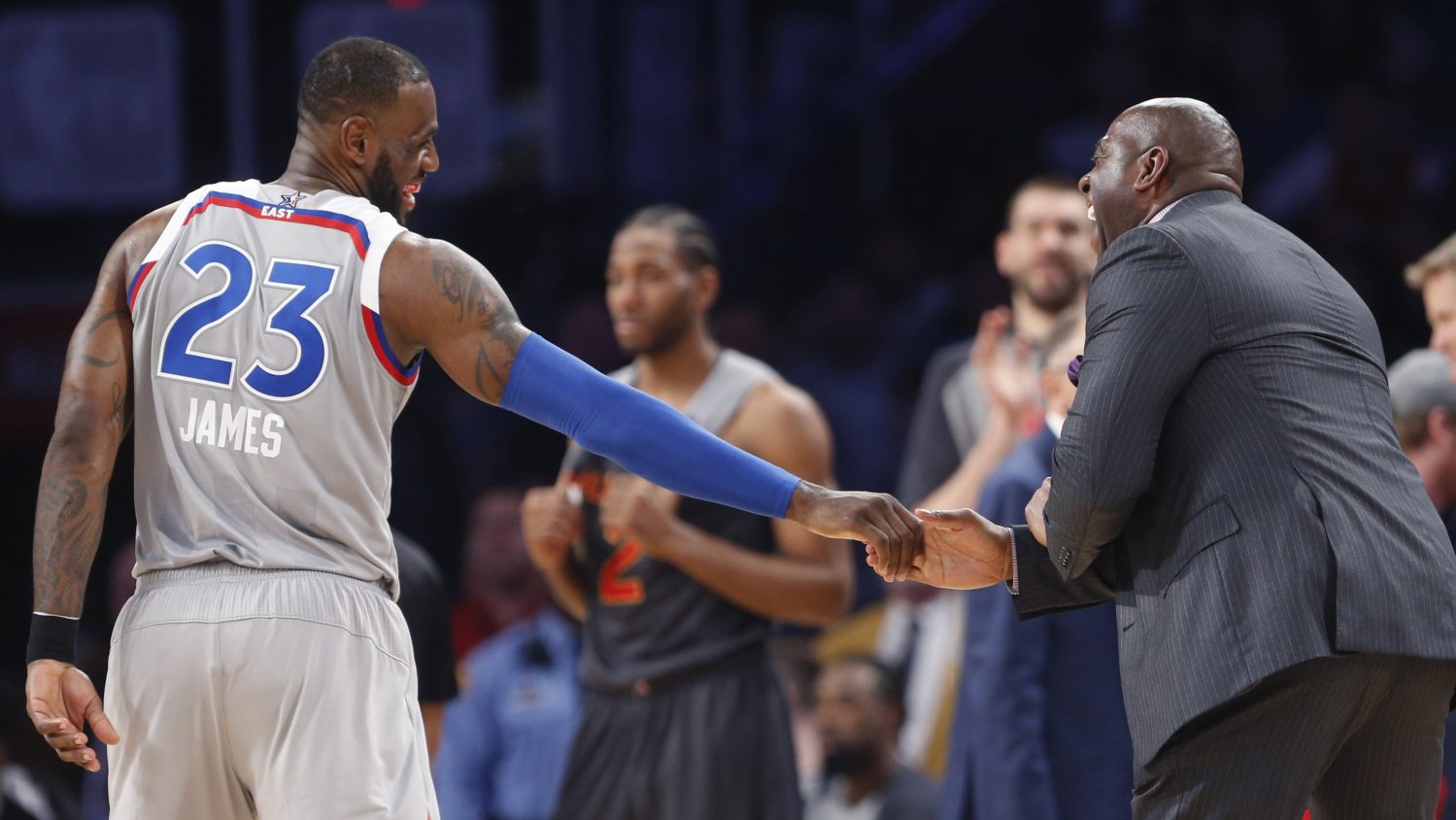 On July 1, LeBron James, the most highly regarded professional athlete since Michael Jordan 20 years ago, signed a four-year, $153.3 million contract with the Los Angeles Lakers. The son of Akron, Ohio, packed his bags for the second time in eight years to not only leave behind a Cleveland Cavaliers franchise that is a glorified junior varsity outfit without him but also eschewed contenders in Houston and Philadelphia to sign up for the Big Baller circus in Tinseltown.

The move, announced nonchalantly through his agency rather than an elaborate television special or as-told-to magazine feature, is just the latest example of James recognizing and wielding the rare power a black athlete has earned outside of the greatest of all time himself, Jordan, and James’ new boss, Earvin “Magic” Johnson.

James, 33, has lived up to the hype and unfair expectations leveled at him by cynics and naysayers since Sports Illustrated, in 2002, decided to put a high school junior on its cover. He was “overhyped,” yet he won four NBA MVP awards in five seasons and should have won more. He couldn’t make it to the Finals, yet went eight straight times. He couldn’t win the big one, yet did it three times.

James has maintained a statesmanlike demeanor in the face of the detractors, even when there’s a touch of racial undertones. There was the meandering Fox News host who told him to “shut up and dribble” because she didn’t like the cut of his jib. Cavaliers owner Dan Gilbert, writing in Comic Sans font like a schoolchild, treated James’ 2010 departure to the Miami Heat like an overseer reacting to the Emancipation Proclamation. In 2017, an unidentified person or persons scrawled the N-word on the front gate of one of James’ homes in Los Angeles.

And unlike his transcendent contemporaries O.J. Simpson, Tiger Woods and the pre-retirement versions of Jordan and Kobe Bryant, James has been unafraid to crash headfirst into the topics of race and politics. At the 2016 ESPYS he urged all athletes to “speak up” and use their platforms to invoke change. He later campaigned for Democratic presidential nominee Hillary Clinton and called the president a bum. Commenting on his vandalized home, James expanded on Kanye West’s not-safe-for-publication lines about black acceptance in white America: “No matter how much money you have, how famous you are, how much people admire you, being black in America is tough.”

But through it all, he’s broken records, won awards and achieved personal milestones to rival Michael Phelps and Usain Bolt. James’ superstar status has eclipsed that of his peers, affording him the opportunity to branch out into other lucrative endeavors.

He owns Blaze Pizza, the “fastest-growing restaurant” in America, and is a part-owner of Premier League club Liverpool, an investment that has quintupled since 2011, and is the most in-demand active athlete in Hollywood outside of professional wrestler John Cena. Oh, and James signed a lifetime deal with Nike that, based on the gesture of his business manager’s finger, is believed to be for more than a billion dollars. James is the “business, man” who Jay-Z rapped about 13 years ago.

He even moves markets all by himself: After he left the Cavaliers in the summer of 2010, the team lost more than $120 million in value. After four seasons in South Beach, the Heat’s value vaulted from $364 million to $770 million. Free agency in the NBA practically comes to a halt when James decides to switch ZIP codes.

It’s no surprise, then, that the man who funneled James to Los Angeles is someone who matches his professional and business acumen. Johnson, the Hall of Famer and renowned businessman, was the lone NBA executive granted a face-to-face sit-down with James during the offseason, which, according to recent reports, was due to James viewing Johnson as a partner rather than as Johnson’s subordinate.

Johnson, one of just three black presidents of basketball operations in the league, is no stranger to power moves on and off the court. Even before ending a 13-year career in 1996 — a career that included 12 All-Star appearances, three MVP awards and five NBA titles — Johnson was flexing his business skills. In the early 1990s, Johnson bought a Pepsi bottling company in the Washington, D.C., area, at the time the largest minority-operated Pepsi franchise in America, and a Los Angeles shopping center. By the new millennium, Johnson owned and franchised fitness centers, Starbucks franchises (he sold 105 locations back to the company in 2010) and movie multiplexes in California, Ohio, Texas, Georgia and Maryland. The star of the short-lived Magic Hour talk show was also a part-owner of the Lakers for 16 years and has been a part-owner of the Los Angeles Dodgers since 2012.

In the history of professional basketball, there has never been this magnitude of black power and control between a player and team executive. Michael Jordan is the quintessential superstar but worked under Jerry Krause through the Chicago Bulls’ championship reign. Any other stars of the past (Bryant, Kareem Abdul-Jabbar, Shaquille O’Neal, Bill Russell) were never as transcendent as Jordan and James, and they never played under a black executive like Johnson.

The partnership of LeBron and Magic may not lead to many, or any, NBA championships (the Lakers are not currently contenders with James and “the kids,” and the Golden State Warriors are still a thing), but their mere existence is a powerful, utopian example of black capitalism and economic self-sufficiency. Both men went from growing up poor — James in Akron and Johnson in Lansing, Michigan — to essentially running the entire NBA. There are only three NBA players who could claim such an accomplishment.

One is in Charlotte, North Carolina.

The other two are now in Los Angeles.