LeBron James and Michael Jordan: the battle continues, in our imaginations

Michael Jordan squared off against Kobe Bryant. Allen Iverson. Vince Carter. Tim Duncan. Kevin Garnett. Same for Dirk Nowitzki. And Shaquille O’Neal. But as destiny would have it, Jordan missed out on playing LeBron James by one season. Seventy-two days, to be exact — Jordan’s last game was a 20-point loss to Iverson and the Philadelphia 76ers on April 16, 2003. James’ NBA journey officially started June 26 when he became the No. 1 pick in the draft. Yet here’s The King, focused on keeping the Cleveland Cavaliers in the top three of the Eastern Conference in late March, once again linked to “the ghost [that played] in Chicago.”

Earlier this week, James joined Jordan and Karl Malone as the only players to score 2,000 points in at least 10 seasons. Last May, he passed Jordan in career postseason points. By hitting double figures in points Wednesday night (in Jordan’s Charlotte, North Carolina, no less), James tied Jordan’s legendary scoring mark of 866 consecutive games with at least 10 points. Jordan and James are the only two players in history to score double figures in at least 800 consecutive games. When was the last time James didn’t score in double figures? That would be 4,101 days ago, on Jan. 5, 2007 — he finished with eight in a win over the Milwaukee Bucks. Current Bucks star Giannis Antetokounmpo was 12.

Jordan’s disciples point to their leader’s unimpeachable record in the Finals, his career scoring average and, of course, just the religion of Jordan that deifies him as eternally flawless. Followers of James point to his consistency, longevity, one-of-one athleticism and dominance. He’s still hooping at an unseen level at 33 years old and 15 years into his campaign toward basketball’s Mount Olympus. But Wednesday night — Jordan, eternally youthful at Instagram and YouTube every second of every day, likely sat someplace watching James play against a team that he owns. Jordan had to expect a loss, as history says that since 2010, when he became the only black majority owner in sports by acquiring the Charlotte Hornets, James is 25-1 against those teams. 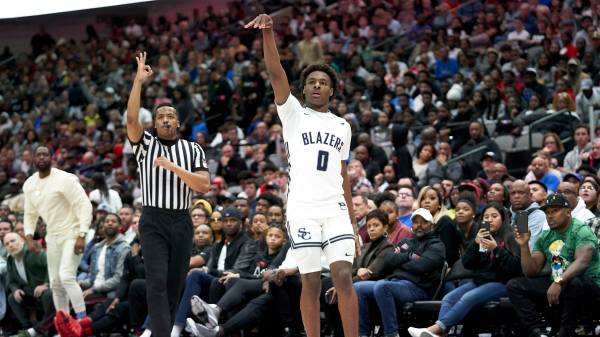 There’s a Nas line in 2001’s “You Da Man” where he states Your arms too short to box with God. This is an obvious homage to the Broadway musical of the same name. But the lyrics apply to basketball and the multigenerational pursuit of the “next Jordan.” Kobe Bryant is the closest in terms of style of play, and hardware. But James is not only close, he looks Jordan eye to eye on a platform that means even more: They both changed the game. They both became the leaders of their generation. James is not only boxing with God, he’s delivering haymakers.

The closest Jordan and James came to squaring off face to face was when Jordan dropped 26 points and 10 rebounds in a 100-91 Washington Wizards victory over the Cavaliers at Gund Arena on April 8, 2003. An 18-year-old James sat in attendance admiring the man he idolized. So many others in his generation wanted “to be like Mike.” LeBron was just the one chosen to — pun intended. The Cavs were not so subtly losing every game possible to acquire the services of the high school phenom. The moment is immortalized in one postgame picture. The one where Jordan, in a suit and patented big hoop earring, shakes hands with a giddy 18-year-old James — in an oversize fitted, and velour suit. Hey, that was the style back in ’03. And that’s all we get.

It’s only right, actually, that the two never crouched into defensive stances and looked each other in the eye. We mortals couldn’t have handled it.