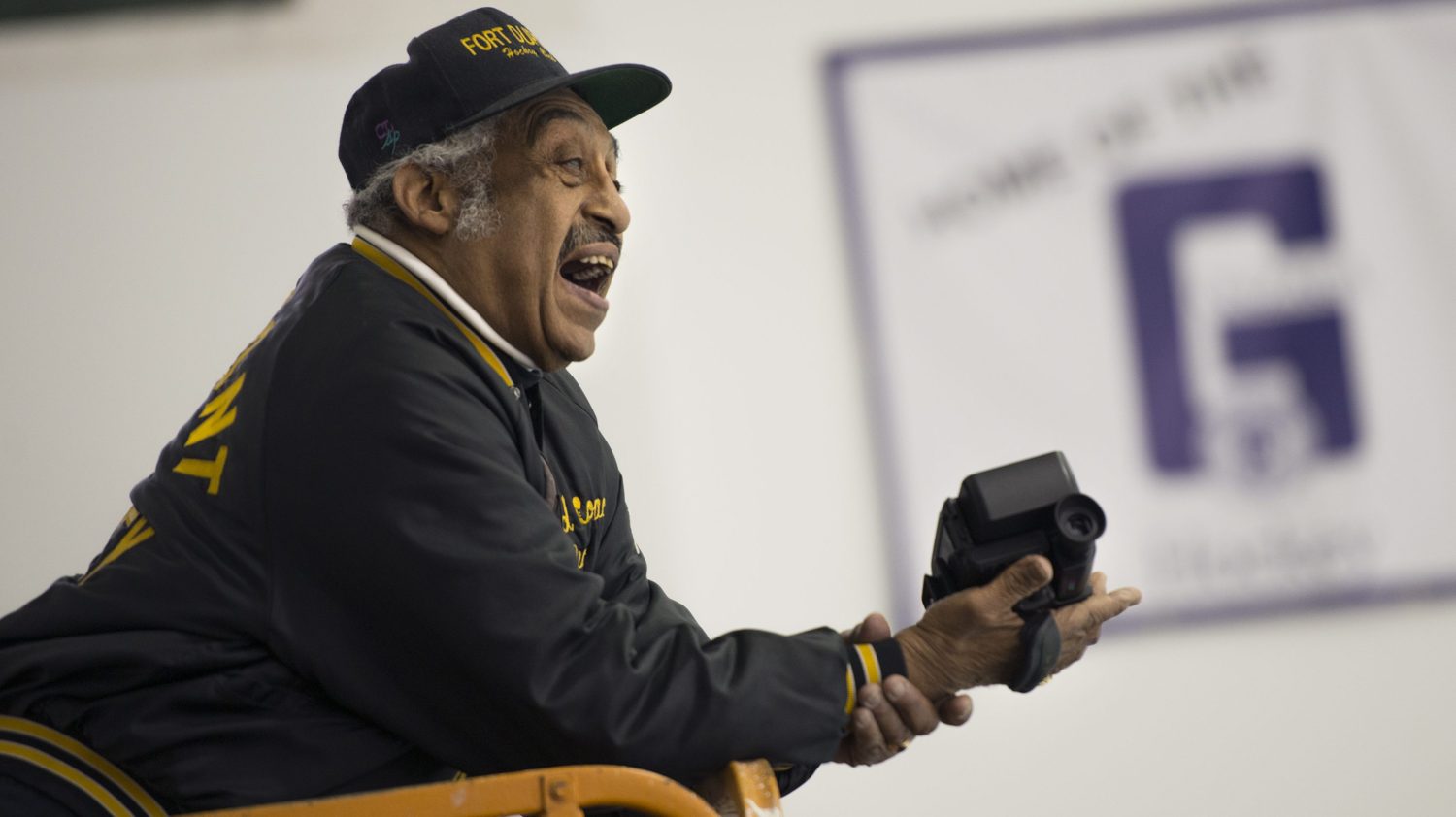 How legendary coach Neal Henderson serves the youth through hockey

The co-founder of the Fort Dupont Ice Hockey Club will soon be inducted into the U.S. Hockey Hall of Fame for his impact on the game

WASHINGTON — On an unseasonably 90-degree evening in early October in Southeast Washington, the Fort Dupont Ice Arena feels like a meat locker, so cold that your body is shocked by the sudden drop in temperature. Inside what was once the lone indoor ice rink in the district sit about 30 youths on raised bleachers putting on equipment.

When 7 o’clock hits, each of the skaters takes to the ice for 10 minutes of warm-ups. They all lap around the rink, with some jumping up and down on one skate. All, on a coach’s whistle, then switch directions, skate backward or immediately drop to the ice.

While the four adults on the ice must often repeat instructions, the boys and girls between the ages of 8 and 19 are attentive and silent. There’s no horseplay or goofing off. And there’s a reason.

Henderson is the co-founder of the Fort Dupont Ice Hockey Club, better known as the Cannons, a Washington-based youth hockey program that may be the oldest minority hockey program in North America. The Cannons, in their fourth decade, are dedicated to providing kids in the district with the opportunity to both learn the game of hockey and gain life skills. For his work influencing the lives of more than 1,500 kids over the years, Henderson has been awarded the NHL/Bridgestone Mark Messier Youth Leadership Award, the USA Hockey William Thayer Tutt Award and countless other honors. On Dec. 12, along with NHL commissioner Gary Bettman and three others, Henderson will be inducted into the U.S. Hockey Hall of Fame at a ceremony to be held in Washington. (The U.S. Hockey Hall of Fame is in Minnesota.)

“It’s overwhelming to think that you’ll be remembered for something that you’re proud of, and that you’ve participated in, and that you’ve had children and parents to be elated at the fact that they’ve had someone that they trust to teach and train their children to play a sport that is dangerous and had the full confidence that the child would be safe,” Henderson told The Undefeated in downtown Washington.

Henderson had been known in his neighborhood in Prince George’s County, Maryland, for teaching kids how to skate. His son, Neal Henderson II, and his friends would practice hockey in the family’s driveway. So in 1976, after being prodded by his son to start a hockey team, Henderson created the Cannons along with high school classmate and current team manager Betty Dean.

Henderson, who played semiprofessional hockey in his younger years in Utah and Washington, would not only have the opportunity to teach team building and responsibility, but he argues that hockey is unique in that it requires spatial and emotional intelligence.

The mission of the Cannons isn’t necessarily about diversifying the sport of hockey but rather using hockey as a channel to prepare kids for the next stages of their lives. Back in the Cannons’ infancy, Henderson would spend, on average, two hours a week on coaching and another 13 hours tutoring and helping his players with their schoolwork. He says he spends even more time with the Cannons now.

The team practices two to four times a week depending on availability at Fort Dupont Ice Arena (the arena and hockey club are not affiliated). Henderson normally prepares for practices the night before, fixing and replacing any faulty equipment. On practice days, he arrives at the rink early to check the quality of the ice and organize the locker room.

The Cannons used to play upward of 14 games a season in the program’s early days. But in recent years, the number of games has dwindled to as few as eight. Henderson’s mum on specifics, but he says teams have come up with myriad last-minute reasons — player sickness, weather, scheduling mishaps — to cancel scheduled games.

“You run into all sorts of excuses,” he said. “But I tell the kids, ‘Practice is what made you perfect, not games.’ But some people get carried away: ‘You gotta have a game.’ My question is, what do you learn in a game. And the only two things you learn in a game: If you win, you eat pizza and the game is over. If you lose, you remember you lost and eat pizza, but it don’t taste as good.”

When Henderson isn’t holding practices or coaching games, he’s working to keep the figurative lights on for the organization, which had an annual budget of $50,000 in 2017 and doesn’t charge the kids a fee for participation. The Cannons are mostly subsidized by donations and internal and external fundraising. The Washington Capitals, who practiced at the Fort Dupont Ice Arena until 1979, have donated at least $200,000 to the Cannons since 2003, according to The Washington Post. The Cannons are a featured charity of the Congressional Hockey Challenge, an annual ice hockey game between federal lawmakers. The NHL and USA Hockey, the governing body for ice hockey in the United States, donate used equipment and lobby for funding on behalf of the team.

In early 2018, after Capitals winger Devante Smith-Pelly was subject to racist taunts from four Chicago Blackhawks fans, the Cannons received $23,000 in donations from other Chicago fans through an online fundraiser. Henderson said he has also used his own money to keep the team afloat. “I believe when people see you helping yourself, they don’t mind helping you because they see that you’re working for a goal instead of waiting for somebody to work with you,” he said.

Henderson teaches his team, a roster that ranges from 40 to 60 players depending on the time of year, that they have to work hard for what they want in life. Every year in mid-October, the players sell fruit and pizza to help raise funds. It’s a lesson in self-sustainability and financial responsibility. “It’s better that you learn how to survive than to have somebody to hand-feed you because you never know when that line isn’t going to give anymore,” Henderson said.

As much as the Cannons are about giving underserved kids an outlet to play sports and teach them life lessons along the way, Henderson also emphasizes education. Players must maintain a C average to play or even practice. Those whose grades slip are still required to attend practices but are relegated to a small room above the rink in the southeast corner of the arena, where they are required to wear all of their equipment while they study. Henderson touts his program’s 95% graduation rate, compared with 68% in district high schools, as evidence that his method works.

But first and foremost, he wants the players to learn to respect themselves and their parents. For some of them, Henderson is the lone father figure. “I say, ‘I’m your dad, I’m your uncle, I’m your best friend, I’m your buddy, I’m anything you want me to be. Just don’t make me mad,’ ” said Henderson, who has been described by those around him as stern yet loving.

While he raises his voice at practice for the players to keep their sticks down or to bend their knees, he hugs nearly every young player who rolls by and makes it a point not to play favorites. The Cannons don’t use the word “best” because everyone is viewed as talented in their own way.

“He’s a really generous person, and he likes to help a lot,” said 9-year-old Javier Love, whose father also once played for the Cannons.

Bernadette Belcher, 14, one of just two girls on the team, called Henderson a “true leader” who believes in and encourages you no matter where you come from.

“When I first came here, the first practice, he said how off ice I’m a girl but on ice I’m just any other hockey player,” she said. “He sees a quality no matter your age, gender, skill level. He’ll teach you with the same respect and encouragement.”

Henderson had to learn about respect in hockey the hard way.

In the 1960s, while coaching youth hockey in Utah, Henderson was approached by two white brothers who said they were “going to do some harm” to Henderson but decided against it because of how well he worked with their children on the ice. Henderson told the men they only hated him because they weren’t used to seeing someone who looked like him, but, he told them, “I’m used to seeing you.”

Racist incidents in professional hockey have been well-documented over the years, but there have been a handful of incidents in the youth hockey realm as well. In January, a 13-year-old Maryland boy was subject to monkey sound taunts at a tournament. In May 2018, a 12-year-old boy from Halifax, Nova Scotia, was called the N-word by an opponent; the boy later told his father he felt “he didn’t belong.”

Henderson, who has served on diversity task forces for the NHL and USA Hockey, gives brief history lessons after every practice with the goal of teaching his players that, no matter their color, we’re all the same. In sports, he tells them, you have to learn how to live among people who don’t look like you.

“I think anytime you have an opportunity for people from different backgrounds, different experiences to come together and to realize that they probably have, when they get to know each other and build what I often call professional interests, they actually have more in common than not,” said Kim Davis, the NHL’s executive vice president of social impact, growth initiatives and legislative affairs. “Neal has been a master at achieving that, and what’s been unique about this program is that the program is focused on attracting kids of color but the program engages all kids.”

The Fort Dupont Ice Arena is located in the district’s Ward 7, a community that is 95% black and one of the poorest in the nation’s capital. The Cannons are about 70% black these days, mostly because of the changing demographics (read: redevelopment and gentrification) in the district over the past few decades. (“I have my own personal feelings about that, and I’ll leave it that way,” Henderson said.)

“These kinds of kids that you run in contact with, those are the kids that other people say, ‘Get away, don’t bother me.’ These are the ones that I found useful and I found a purpose for them,” Henderson said, his voice beginning to break and his eyes welling up with tears.

“That’s the greatest thing that you can get from a guy that’s growing up in the city who had nobody but me. You see a guy that’s 40 years old come up and hug you and cry on your shoulder and say, ‘Thanks.’ Those are the things that make it worthwhile.”

Forty-three years ago, Henderson never saw himself becoming a “special person in hockey” who would be inducted into the Hall of Fame. The only thing that has surprised him over the years is how long the Cannons have lasted.

But at the end of the day, no accolade can compare to the lives Henderson has changed in his community.