‘Give him the recognition because it’s just so overdue’

It was around 1905 when Ace Mumford had to leave his hometown of Buckhannon, West Virginia, at just 7 years old to get an education. Why? Simply put, because blacks weren’t afforded one there at the time.

Now more than 110 years later, Southern University’s legendary football coach will be honored by that same small town Sunday after a recommendation from an NBA general manager who’s very proud of one of the greatest black college football coaches.

“It’s a small town. I knew where he grew up. I knew where he would’ve played as a kid because it’s places I’ve been in,” Memphis Grizzlies general manager Chris Wallace told The Undefeated. “Give him the recognition because it’s just so overdue. Someone from a small town such as ours goes on to accomplish such great things in sports and yet no one knows about it. When I mentioned it to a few people in Buckhannon over the years, no one had heard of it.” 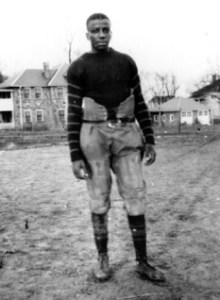 Arnett William “Ace” Mumford was born in Buckhannon on Nov. 26, 1898. This town in the foothills of the Allegheny Mountains has a population of about 5,000 people today that is predominantly white, as it was back in Mumford’s day. The 2010 U.S. Census said it was 94.5 percent white and 2.5 percent African-American. If you’re interested in seeing some people of color in Buckhannon, your best bet is to go on the campus of West Virginia Wesleyan College.

It’s those statistics that make Mumford’s black college football accomplishments even more amazing. With no education available for blacks, Mumford left his parents, John and Victoria, at the age of 7 and moved in with relatives 90 miles away to get an education. He ended up graduating from all-black Sumner High School in Parkersburg, West Virginia, and Wilberforce University in Ohio.

“The odds of this happening, that a native son of Buckhannon is an iconic figure of black college football is pretty remote, considering that we’ve had an extremely small African-American population forever,” said Wallace, who is white.

Mumford succeeded at three different colleges as a football coach before arriving at Southern University and A&M College in 1936. He won 11 Southwestern Athletic Conference championships in 25 seasons while coaching at Southern and produced 35 All-Americans. The Jaguars went unbeaten under Mumford in 1938 and from 1948-50 they earned a 31-0-2 record.

And long before the famed Bayou Classic between Southern and Grambling State, Mumford only lost one game against the Tigers’ legendary coach Eddie Robinson.

“He had one of the finest minds in football,” Robinson once told the Louisiana Sports Hall of Fame. “I learned a lot from him. He was a coach’s coach. He was on top of everything. He was very innovative. He worked for perfection.”

West Virginia, which doesn’t have a state population over 50,000, has produced such college football coaching stars as Nick Saban, Rick Rodriguez, Jimbo Fisher, Fielding Yost and John McKay, Ben Schwartzwalder. With his Hall of Fame credentials, Mumford has a place on that list, too.

Mumford led Southern to five black national championships. He had a 170-60-14 record at Southern, and as a result, the school’s football stadium is named after him. Mumford also coached the basketball team to the 1941 National Invitational Intercollegiate Basketball Tournament black national title.

“I was just blown away with accomplishments,” Wallace said. “He wasn’t just the most successful coach at Southern University, and he has a stadium named after him. He is on the Mount Rushmore of black college coaches.”

Wallace is a native of Buckhannon who became familiar with Mumford in recent years from the Southern University sports information department. After learning about Mumford, Wallace passed on the news to Buckhannon mayor David McCauley. McCauley had been looking to name bridges and other notable parts of town after prominent natives. He quickly loved the idea of honoring Mumford.

“No one knew about him back where we were from,” Wallace said. “And that’s where [McCauley] delved into it. To his credit, he did some research and said, ‘We got to do something.’ ”

McCauley is honoring Mumford on Sunday with a plaque that lists all his accomplishments at the lot where his childhood home was. Sunday is also Buckannon’s second annual Diversity Day. Mumford’s name will soon go on a list of notable residents shown on a sign entering the town.

“Unfortunately, we couldn’t find any living relatives to be there in his honor,” McCauley said. “But we hope that in time Southern will send someone out to view the memorial.”

Wallace had originally planned to fly into Pittsburgh and drive about two hours to Buckhannon for the Mumford celebration. But with Hurricane Matthew making its presence strongly known this weekend, he has instead decided to drive the 12 hours to ensure that he will be at the Mumford ceremony.

“Ever since I’ve heard about Coach Mumford, I’ve been fascinated by this story, all facets of it,” Wallace said. “It’s something that I’m proud the mayor did. The recognition is decades overdue.”