Let’s take the national anthem literally, and the songwriter at his word

A deeper look at the song, the man who wrote it — and the history attached

When San Francisco 49ers quarterback Colin Kaepernick decided not to stand for the national anthem, he set in motion a chain of events that not even he — a black athlete fed up with systemic inequality of blacks in America — could have foreseen. Even with the historical precedents.

Boxer Muhammad Ali refused induction into the U.S. Army in 1967, was stripped of his world title and had his New York State Athletic Commission boxing title revoked. Ali wasn’t revered as a civil rights leader by the public at large until he lost the ability to speak. Olympic sprinters John Carlos and Tommie Smith won gold and bronze medals for the United States at the 1968 Olympic Games, raised their black-gloved fists as The Star-Spangled Banner was played, and were expelled by the International Olympic Committee. Back home, the U.S. Olympic Committee suspended the pair, stating, “The untypical exhibitionism of these athletes also violates the basic standards of good manners and sportsmanship, which are so highly valued in the United States.” Even baseball pioneer Jackie Robinson — complicated political history aside — couldn’t bring himself to sing the national anthem or salute the flag.

Much like how the murders of nine black churchgoers allegedly carried out by white supremacist Dylann Roof in South Carolina a little over a year ago led to a nationwide reconsideration of the Confederate battle flag, Kaepernick’s defiance of police brutality in a nation that “oppresses black people and people of color” and the flag that he believes represents it has inadvertently sparked a reviewing of the 200-year-old song about that very flag: The Star-Spangled Banner.

Francis Scott Key was born in 1779 on a Frederick County, Maryland, plantation to upper-class parents who benefited greatly from chattel slavery. He eventually studied law in the state’s capital and became a prominent lawyer in Washington, D.C., in the early 1800s.

Following the Battle of Baltimore on Sept. 14, 1814, against invading British forces — where the lawyer had been “dispatched by President James Madison on a mission … to negotiate for the release of Dr. William Beanes, a prominent surgeon” — Key famously penned what would become our national anthem. After witnessing 25 hours of combat — And the rocket’s red glare!/The bombs bursting in air! — Key assumed the Americans had lost, but was then elated to see the Stars and Stripes still flying the next morning at Fort McHenry — Gave proof through the night/That our flag was still there/Oh, say does that star-spangled banner yet wave.

The Star-Spangled Banner is actually four verses long, though, and features lyrics that go beyond what we’re used to hearing at presidential inaugurations, military ceremonies and sporting events.

Though the well-known first verse, “in which a young man peers into a foggy and rain-soaked dawn to find out whether his country has been conquered in battle, is urgent, open-hearted and honest,” the third verse all but contradicts any meaning of a “land of the free” and “home of the brave” (emphasis mine):

And where is that band who so vauntingly swore,
That the havoc of war and the battle’s confusion
A home and a Country should leave us no more?
Their blood has wash’d out their foul footstep’s pollution.
No refuge could save the hireling and slave
From the terror of flight or the gloom of the grave,
And the star-spangled banner in triumph doth wave
O’er the land of the free and the home of the brave.

The War of 1812 was caused, among other things, by Great Britain’s attempt to restrict U.S. trade and America’s desire to expand its northern territory by annexing Canada. By 1810, more than 15 percent of the U.S. population was enslaved, and British forces recruited escaped slaves to fight for the slaves’ freedom against the American militia. This unit, referred to as the Colonial Marines, was part of the British forces that overran Washington, D.C., in 1814 and set fire to the White House.

So when Key references the “foul footstep’s” of the “hireling and slave” who “no refuge could save” from “the gloom of the grave” in the third verse, he’s referring to the killing of Colonial Marines. As noted by The Root political editor Jason Johnson, “The Star-Spangled Banner is as much a patriotic song as it is a diss track to black people who had the audacity to fight for their freedom.”

Following the War of 1812, the Treaty of Ghent was signed, with the United States ordering the return of “such slaves as may be in your control, belonging to any inhabitant or citizen of the United States.” The British refused.

Key did not have a complicated or complex history with race. He “supported sending free blacks (not slaves) back to Africa and … was about as pro-slavery, anti-black and anti-abolitionist as you could get at the time,” Johnson wrote in his article for The Root. He owned slaves while writing the national anthem, at one point referring to blacks as “a distinct and inferior race of people.”

Though Key won several legal cases on behalf of slaves during the 18th century, 2o years after writing the national anthem, he is believed to be responsible for inciting the Snow Riot of 1835 with the overzealous prosecution of a young black man accused of trying to kill his mistress. According to Smithsonian, Key “used his office as the District Attorney for the City of Washington from 1833 to 1840 to defend slavery, attacking the abolitionist movement in several high-profile cases,” including an episode wherein he unsuccessfully sought to have a New York doctor hanged.

Muhammad Ali wasn’t revered as a civil rights leader by the public at large until he lost the ability to speak.

Nothing Kaepernick has said in recent days gives reason to believe he knew anything about the history of Key or The Star-Spangled Banner when taking his stand the past few weeks. He never mentions Key by name and never takes umbrage with the actual words behind the song. But the sixth-year veteran’s history with race likely well-prepared him for this moment.

Kaepernick was born in Milwaukee. His mother was a white woman, age 19. His father was African-American, and left the home before Kaepernick was born. At 5 weeks old, Kaepernick was placed up for adoption, and a white couple in the area eventually adopted him. From the beginning, Kaepernick’s parents made him aware of his race but didn’t force the issue. “I never felt I was supposed to be white. Or black, either. My parents just wanted to let me be who I needed to be,” he told MrPorter.com last September. Halfway through the 2012 season, Kaepernick took over the starting job for the 49ers, and just that quickly the 6-foot-5, chiseled 24-year-old with the half-sleeve tattoos was the face of an NFL franchise. And the criticism began.

Just weeks after his first start, former Sporting News columnist David Whitley wrote a scathing critique of Kaepernick, based solely on his ink. “NFL quarterback is the ultimate position of influence and responsibility. He is the CEO of a high-profile organization, and you don’t want your CEO to look like he just got paroled,” Whitley said, while also comparing Kaepernick to inmates at San Quentin State Prison in California. A season later, as Kaepernick led the 49ers to their second consecutive NFC Championship game, Democrat & Chronicle reporter Sal Maiorana tweeted “Kaepernick. Always so media friendly. Turn your cap around and act like a professional quarterback.” Quarterbacks of all races wear caps backward.

Despite never having made a statement about race at that point in his career, Kaepernick was continuously thrown into the racially coded debate over appearance and behavior. Since remaining seated for the national anthem, Kaepernick has been called the N-word too many times to count. Based on everything Kaepernick risks losing by taking this stance — football contract notwithstanding — his stand is that much more courageous.

In 1900, as part of a celebration of former U.S. President Abraham Lincoln’s birthday, civil rights activist and educator James Weldon Johnson performed Lift Ev’ry Voice and Sing, a poem he had written a year prior. In 1919, the National Association for the Advancement of Colored People (NAACP) adopted Lift Ev’ry Voice and Sing as its official song, later renaming it the Negro national anthem before it was again changed to the black national anthem toward the end of the 20th century.

A second verse of the song sings:

Stony the road we trod
Bitter the chast’ning rod,

For Mo’ne Davis, her first year at Hampton was a winner, though it ended abruptly Read now 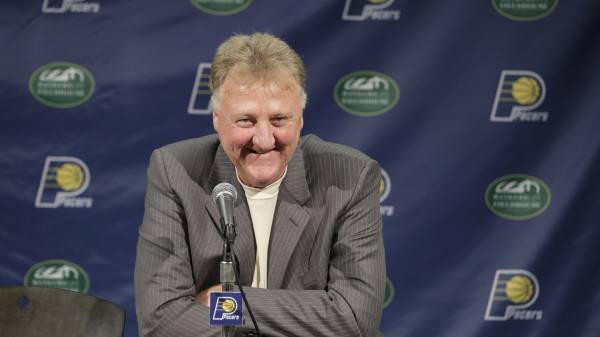 Larry Bird Q&A: Being a white player in the NBA, trash-talking and today’s game Read now

Felt in the days when hope unborn had died;
Yet with a steady beat / Have not our weary feet,
Come to the place for which our fathers sighed?

The Star-Spangled Banner wasn’t written for people like Kaepernick. The song was penned by a slave-owning lawyer who spent a lifetime fighting against the rights of African-Americans. But whether Kaepernick knows it or not, his stance alludes to a different national anthem — a “chast’ning rod” won’t stop him from standing up for what’s right.