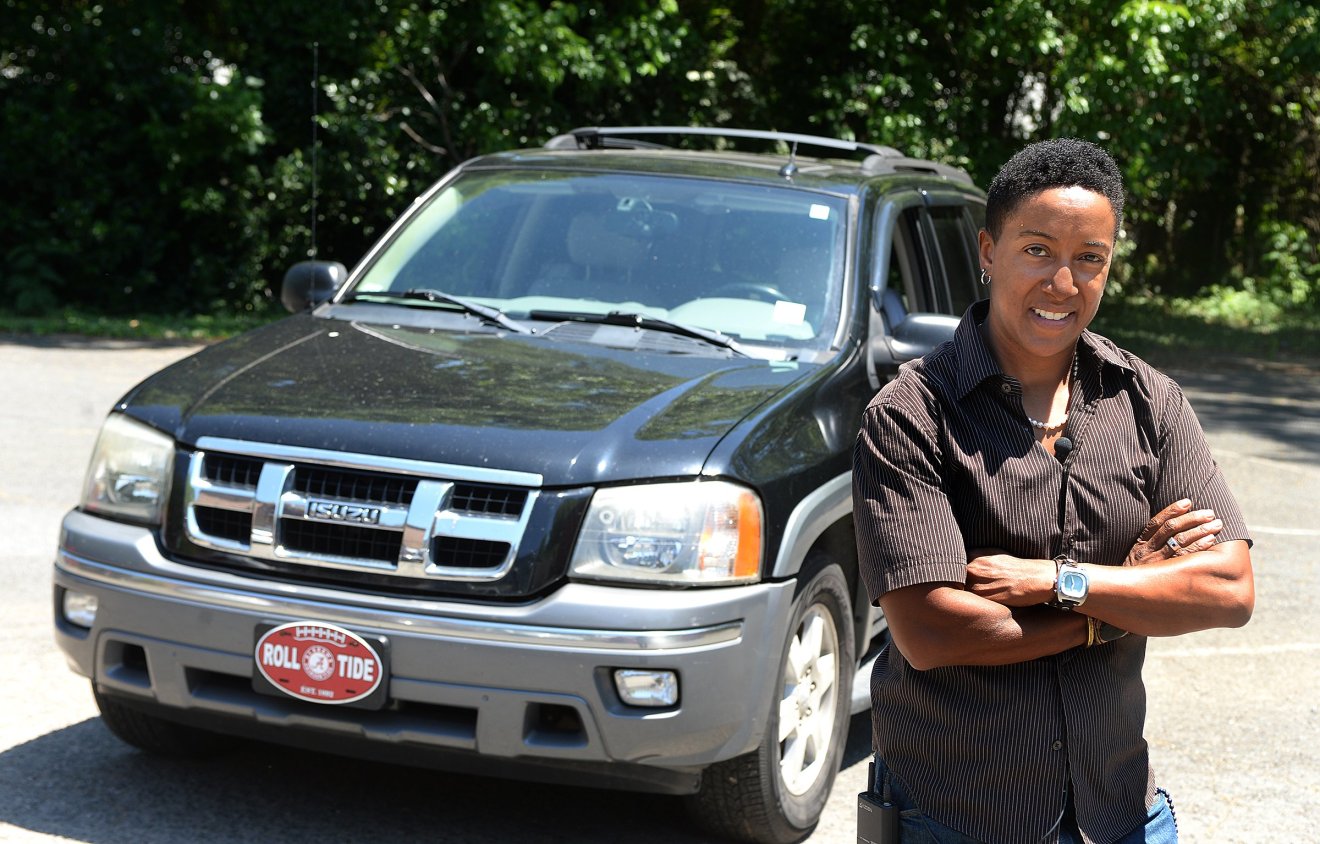 Former Observer writer Tonya Jameson shared an incident involving her new car, shown here, last week on her blog, Sip and Play Charlotte. She had a gun pulled on her by a Knoxville Police Department officer as she was changing a license plate on this Izuzu SUV she purchased in Jefferson City TN. “It’s been a week since I almost became a hashtag – another unarmed Black person shot by a cop,” she wrote. Diedra Laird/Charlotte Observer
Commentary

Lifesaving advice from a black woman held at gunpoint by police

It’s still hard for me to believe that last month I almost became a hashtag — another black person gunned down by a panicky cop.

I don’t have a criminal record.

I shop at Trader Joe’s.

As I stared at the officer nervously pointing his gun at me, I realized immediately what he saw: a black person who had no business being in his neighbor’s driveway.

Wait, let me take you back to the beginning:

On April 28, I bought a 2005 Isuzu Ascender from a woman in Jefferson City, Tennessee. I was on my way home to Charlotte, North Carolina, from Nashville, Tennessee, and I found the SUV on Craigslist. I had been searching for the perfect SUV for more than a month. This had a female owner who followed the maintenance schedule, relatively low miles, leather interior, tow package, roof rack and even a sunroof. The Ascender was the one. I bought it on the spot.

I left with both sets of keys, the title and a bill of sale, which she signed. Over the next couple of days, we talked a couple of times as I confirmed my pickup date of May 3. That’s how I found myself at the end of her son-in-law’s gun. I drove a rental car to Morristown, Tennessee, and took an unmarked taxi to the woman’s house about 3 p.m. I talked to her the day before. The Ascender was parked in the same spot in her driveway as it was the previous week when I purchased it. Her newer Toyota 4Runner was parked beside it.

The cab dropped me off and sped away. We’d gotten lost along the way, and he was irritated. I was tired but excited. The sun was shining, and the area around me was beautiful with lush trees and rolling hills. I soaked in the scenery.

I retrieved my North Carolina license plate and a small screwdriver from my duffel bag. As I screwed in the plate, I heard a voice behind me: “I’m an off-duty Knoxville police officer.” Something told me to stand up slowly with my hands up. I turned, facing the direction of the voice. He’s pointing his gun at me. My heart races. I look around. There is no one else outside. My mind is racing. I chide myself for not giving the address to anyone. No one knows where I am. I lament not answering the phone a minute ago when it rang. I am completely alone. My phone is next to my bag. I don’t think I should move.

It’s so quiet. Philando Castile flashes through my mind. I think about how cops are killing black people and getting away with it. I bought the SUV last Friday, I tell him, being mindful not to raise my voice. He doesn’t lower his gun. He tells me he is the seller’s son-in-law, and he lives across the street. He saw me get out of a car that sped away. It was a taxi, I explain. He’s incredulous. The registration and bill of sale are in my duffel bag. I tell him the keys are in my pocket. He tells me not to move. He orders me to put down the small screwdriver that I’m sweatily holding in the air. I ask if I can lower my hands. He says yes. Even though, to this point, he’s still pointing his gun at me as he talks to the 911 dispatcher.

He tells the dispatcher that I’m trying to steal his mother-in-law’s SUV. He gives her the tag number. The dispatcher tells him that the tag matches the truck. He, apparently, doesn’t hear her because he keeps pointing the gun at me. He finishes the call and holsters his gun. I exhale and lean against the truck. He tells me to sit on the step beside the house. Again, I invite him to check the registration in my bag. I share various details about his mother-in-law. He tells me he knew she was selling the car, but she hadn’t told him she’d sold it.

Seven minutes later, a Jefferson County sheriff’s deputy arrives. The cop tells his side of the story. I tell the deputy I have the registration in my bag. He doesn’t check it, nor did he run the plates. I offer him the signed bill of sale and keys. Not good enough. He wants to talk to the woman who sold me the car. She wasn’t home and wasn’t answering her cell.

We’ve been over this already. Again, I tell the deputy that the registration is in my bag, and it matches the VIN on the car. Or that he can simply run the plates. He asks for the title. I don’t have the title — I have the registration. He asks if I have the phone number of the woman who sold me the car. I read to him from my phone. He compares it to the number on the bill of sale. It matches. I’m wondering, to myself, what that exercise just proved — but I remain calm.

He still doesn’t run the plate. Since I was allowed to pick up my phone, I text a friend: “Cops here. They don’t believe I bought the car. Gonna call. Just stay on the line …” Finally, the off-duty cop gets his wife on the phone. She confirms the car was sold to someone in North Carolina. They let me go with a weak apology, and the typical, “There’ve been a lot of burglaries in the area.”

Initially, I was just glad to be alive — but after blogging about it, I realized that wasn’t enough. It wasn’t just about me — this was an opportunity to prevent the next Philando Castile. I filed a complaint with the Knoxville Police Department’s Internal Affairs Unit against Officer Matthew Janish, the off-duty cop who drew his gun on me. I complain to Jefferson County Sheriff G.W. “Bud” McCoig about how his deputy handled the call.

McCoig said his deputy acted appropriately despite not running my tag or looking at the registration. McCoig also said his deputy denied that I told him I had the registration. Since the deputy only stayed for 11 minutes, McCoig didn’t think it was a big deal. I explain to McCoig that after one cop pulls a gun on you, and then the other officer won’t follow common sense and run the plate, but instead interrogates you, 11 minutes is an eternity. I told him his officer created an even more threatening encounter for me. McCoig was unsympathetic and concluded the conversation with, “I’m glad everything worked out, and as far as I’m concerned this is closed.”

Knoxville Police were a little more sympathetic. Chief David Rausch actually came to Charlotte a little more than a month later to tell me the internal affairs investigation concluded that officer Janish’s actions were “lawful and proper.”

He said that he felt it was important to tell me results in person and answer any questions that I might have.

I told him that I wasn’t surprised by their findings, but I was disappointed. The system is designed to exonerate police officers, not provide justice for their victims, especially black ones. My incident, however, gives me new insight into just how much the law values police lives over the citizens they are supposed to protect.

Chief Rausch revealed that Janish thought I was a teenage boy. Considering that I have a low-fade haircut and was wearing khaki-style shorts and a “Free Press” T-shirt, I wasn’t surprised. I tell the chief that although I am not a teenage boy, his officer shouldn’t assume that all teenage boys are criminals.

The chief told me when doing these types of investigations, it is essential to understand an officer’s mindset to determine the facts. Here are the facts that Janish focused on: unmarked, speeding cab; black person; duffel bag; and the license plate. Here are facts he ignored: He knew his mother-in-law was selling the SUV, it was broad daylight, and I knew her first name but not her last. I offered to show him the keys, registration and bill of sale signed by her.

Those are the actual facts. Janish’s mindset was the scenario he created in his head.

He saw a black person, supposedly a teenage boy, and assumed the worst: that I was either a burglar or a car thief. His fears weren’t facts.

The moment I arrived on that street I became a suspect, and under the law, it seemed that Janish became a victim. He could have stayed at his house, called 911 and waited for sheriff’s deputies to arrive. Instead, he grabbed his weapon and came outside to confront me.

Every action I took was suspicious in his mind. Looking to the left and right twice was deemed suspicious. Not knocking on the door was also suspicious, but I suspect knocking would’ve been suspicious, too.

Reading the investigation case file, Janish likely would have been within his legal rights to shoot me. I was amazed at the scenario he created about the taxi — it was a lookout vehicle lurking nearby.

In a statement supporting the investigation’s findings, Knoxville Mayor Madeline Rogero talked about the extensive training officers receive in appropriate use of force and de-escalation.

Is the fact that Janish didn’t shoot me considered de-escalation? Why is pointing a weapon at a law-abiding citizen considered an appropriate use of force? Why doesn’t police training include exercising common sense?

Who steals a car by putting a license plate on it first? Who steals a 12-year-old Isuzu Ascender instead of the newer Toyota 4Runner parked beside it? What car thief offers the amount of proof that I did?

I understand Janish’s vantage point, that the situation looked strange from his house. He was well within his right to investigate; any good neighbor would do that. But this situation warranted some common-sense questions: “Who are you?” “What are you doing?” The inquiry should come first, instead of a gun. That’s de-escalation.

During his Charlotte visit, Rausch talked about lessons learned. I didn’t overreact. I didn’t get angry. I survived.

My behavior is how everyone should act in those situations: comply, survive and complain later. I told him it’s not natural to be accused of doing something wrong and not prove your innocence. I wanted to show the keys, the vehicle registration and the bill of sale. I fought every impulse to do anything that would make him feel more threatened.

I don’t have de-escalation training. I’m the one being held at gunpoint. I’m the one thinking my life could end if he panics. Yet, I’m the one who must remain calm. The legal system is asking untrained civilians to de-escalate panicky cops.

What about our lives? We’re tired of becoming hashtags. We’re the ones the police are supposed to protect. Our lives matter, too.