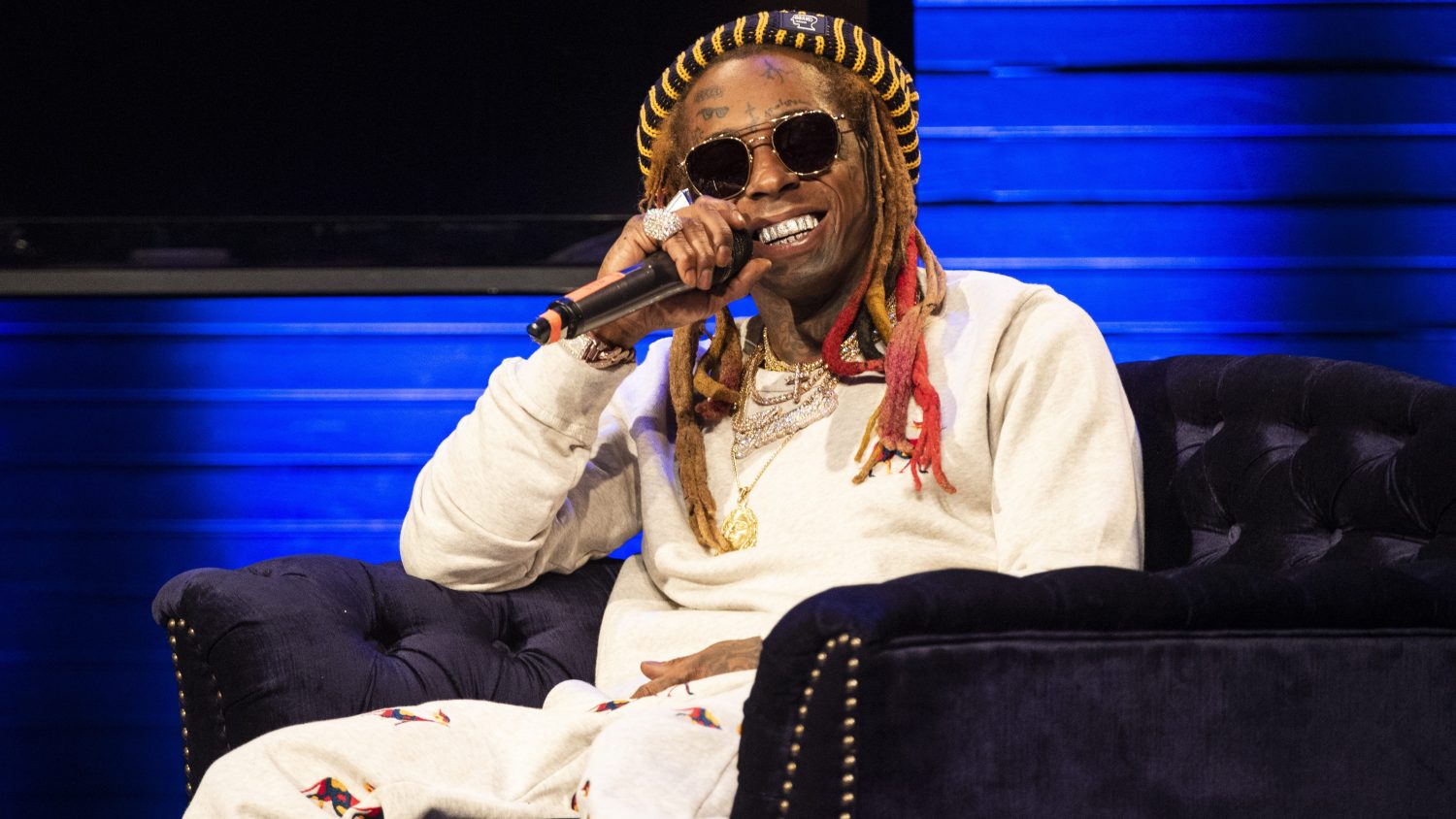 “Go suck Lil Wayne lil’ d—.” By his own admission, in 2009’s The Carter documentary, it was these words (the speaker of which remains unknown or unsaid) that led to Dwayne Michael Carter Jr.’s first sexual experience. He was the only preteen in a large room full of older men, including Baby, aka Birdman, his father figure. A teenage girl was allegedly summoned to service young Dwayne in another room.

“I got raped when I was 11,” Wayne told rapper Lil Twist, then 15. “I loved it. I ain’t never press charges.” Another room full of folks laughed as Wayne recounted the New Orleans tale.

Wayne did admit, in the doc, that he’d been scared. The situation was toxic. “I was a different man after that,” he said. “I was Lil Wayne.” Wayne’s case is similar to other cases where boys twist an assault into a positive experience. Shortly after the release of the documentary (which Wayne signed off on, then had a change of heart about), he was a guest on Jimmy Kimmel Live!, and the topic was again presented to Wayne.

Is it true that you lost your virginity at 11 years old?

For those who love hip-hop

The crowd was … entertained by the story. Wayne laughed uncomfortably. Wayne was 11 at the time of the incident. The girl was approximately 14. They were endangered, abused and placed in a position gut-wrenching to fathom. Kimmel’s audience clapped and cheered. People seemed to get a kick out of Kimmel jokingly inquiring if one of Wayne’s sons, then 4 months old, was still a virgin. When asked by Kimmel if the incident affected him negatively, Wayne’s emotion, even from behind sunglasses blocking the gateway to his spirit, spoke volumes.

Lil Wayne, 36, recently released Tha Carter V to much acclaim, high sales and big streaming numbers. It’s the most personal record from the hip-hop titan to date. In 2016, when Lil Wayne abruptly tweeted that he was “defenseless and mentally defeated,” the source of at least some of that sadness was no secret. Weezy was years deep in a legal drama with Cash Money Records, the label he helped etch into pop culture history. He followed the tweet with a disclaimer. “Ain’t looking for sympathy,” Wayne noted, “only serenity.” He’s been on that journey since he was 11.

Wayne’s DNA is all over hip-hop. The tattoos, the flow, the style. Yet, not so long ago, the music industry energy was that Wayne was over. Several promised release dates came and went and Carter V remained unreleased, taking up residency with fabled unfinished projects such as Dr. Dre’s Detox.

Wayne was creating, though. A bevy of mixtapes added to an already legendary palette. This year’s Dedication 6, while as close to vintage Wayne as anyone had heard in years, nevertheless at times seemed uninspired and, at other times, behind the curve. Neither of which describes Wayne.

Wayne’s hiatus played itself out in the lyrics of his peers. Free C5, Drake rapped on 2016’s “Two Birds, One Stone.” The dissolving of Wayne and Birdman’s relationship was fodder for Rick Ross’ piercing Birdman diss, “Idols Become Rivals.” I pray you find the kindness in your heart for Wayne, Ross rapped. His entire life / He gave you what there was to gain. Meanwhile, Pusha T kept the embers of a decade-long Wayne beef burning with 2018’s “Infrared.” Salute Ross ’cause the message was pure/ He see what I see / When you see Wayne on tour / Flash without the fire / Another multiplatinum rapper / Trapped and can’t retire.

Tha Carter V has amassed a gargantuan 433 million streams — the second-highest total ever for an album in its opening week.

But in June, Wayne reached a settlement in his lawsuit against Cash Money Records in which he claimed the label withheld millions of dollars. Sources said Wayne walked away with well north of $10 million. As importantly, it meant that the long-awaited Carter V, an album he’d been working on since 2014, would finally see the light of day.

Rap missed Lil Wayne. Tha Carter V not only landed atop the Billboard 200, it did so by moving the equivalent of 480,000 sold units — the third-highest of 2018. And it amassed a gargantuan 433 million streams — the second-highest total ever for an album in its opening week. All with no conventional lead single.

Where it falls in the Carter lineage is debatable — although it is a step up from 2011’s C4. The first three Carters represent Wayne at different creative peaks. But what separates this project is introspection. It’s largely shaped by women in his life. His mother, Jacida “Ms. Cita” Carter, is the album’s narrator. His firstborn, Reginae, rides shotgun on “Famous.” Rapper Nivea B. Hamilton, Wayne’s ex-fiancee and mother of two of his children, is featured on the poignant “Dope New Gospel.”

“Dark Side of the Moon” is Nicki Minaj’s clear-cut musical moment after a summer of beef and bad publicity. The duet works along themes of unattainable love and looks back at the New Orleans legend at several crossroads of his career. How would he carry a label by himself once The Hot Boys disbanded? How would he respond musically before heading to jail? And what could a return mean after nearly a half-decade in musical confinement? There are answers on the dark side.

“Mona Lisa,” a duet with longtime Wayne fan Kendrick Lamar, is an instant landmark. The combination of lyrics, styles and cadences makes it as much a Ryan Coogler movie as one of the best songs of 2018. “Uproar” received the Shiggy treatment, its own dance — a bona fide stamp of cultural clout. “Dedicate” features the most self-assured lyric on the album: In the foreign car that I could talk to and s—, Wayne raps as he bathes in confidence, With a cultural b—- I can talk to and s—/ ’Bout the culture and s—, how I altered this s—.

Although C5‘s an exhaustive listen at 23 songs and nearly 90 minutes long, Wayne’s willingness to expose layers of his soul is the album’s Olympic torch. “Open Letter” borders on scary as Wayne chronicles his battles with self-hatred. Sometimes the loved ones don’t love us, he raps in a not-so-subliminal ode to Birdman and Cash Money. Sometimes I fear who in the mirror, that n—a weird, he continued. He done died so many times but still here / Why am I here?

In 1994, at the age of 12, young Dwayne was out of school early for report card day and was devouring a Burger King combo meal at home. He noticed a Taurus 9 mm handgun. It had been left at the house a day earlier by a man who had come over to watch football. Dwayne shot himself in the chest. 911 operators pressed a wheezing Wayne for details of what happened when he called. “You’ll find out,” he responded, “when you get here.”

Wayne has dubbed the incident an accident. “Yeah. … Oh, nothing. Just young, stupid. Trippin’. High,” he said, flashing his diamond-encrusted grill. “But it’s cool. I’m here. Making beaucoup money.” It’s much like he described the sexual abuse. Wayne’s coping mechanism has been deflection.

But then Wayne got older, and the truth came out of hiding. On Solange’s 2016 “Mad,” he rhymes, And when I attempted suicide, I didn’t die/ I remember how mad I was on that day / Man, you gotta let it go / Before it get up in the way.

On Carter V’s closing number, Wayne is as open as he’s ever been about the events of Nov. 11, 1994, at Apartment D on Monroe Street in New Orleans. After the suicides of Kate Spade and chef Anthony Bourdain, Wayne updated lyrics to a song that was already years old by the time the album dropped.

I found my mama’s pistol where she always hide it

I cry, put it to my head and thought about it

Nobody was home to stop me so I called my auntie

Hung up then put the gun to my heart and pondered

Too much was on my conscience to be smart about it

Too torn apart about it

I am where my heart was pounding

I shot it and woke up with blood all around me

But I was dying

Trace Wayne’s life timeline. This is the petri dish in which Carter V was cultivated. He started rapping at 8. He signed his first record contract at 11. Sexually assaulted at 11. Attempted suicide at 12. Lost the most influential male figure in his life, Reginald “Rabbit” McDonald, at 13. “Really, the [only] thing I can say that [McDonald] influenced to me being a father is be a father,” he said in 2000. “I think he’d just be thuggin’ it out with me. I think he’d be more worried about me taking care of myself.”

Wayne had his first child at 15. He became a rap superstar — carrying Cash Money on his back. Wayne adopted a Tupacian work ethic and became a mixtape pioneer of the 2000s: His 2004-09 run may never be duplicated. His entire neighborhood was destroyed by Hurricane Katrina, and Wayne, who lives mostly in Miami, has never moved back to New Orleans. He slipped further into a wicked lean addiction. Spent nearly a year in New York City’s Rikers Island jail complex. Became involved in a bitter public legal dispute with the label he helped build with Birdman, whom he openly called his “father.”

Lil Wayne can be his own worst enemy at times. He’s been on the negative side of headlines more than once. Tardiness has plagued him in recent years. His lyrics have sparked debates and lectures on colorism. Other lyrics, he’s had to apologize for. But there’s an undeniable sympathy and empathy for Wayne that separates him from his generational peers Kanye West and Eminem. People want to see Wayne win.

Wayne’s Billboard dominance, even after his years in exile, feels familiar. It’s likely why LeBron James, when asked recently if he was excited to have Wayne back in the game, said, “Where did he go? He didn’t go anywhere. … Wayne’s been making music how long? Since ’96.” Thank God Weezy back, Wayne himself proclaims on “Dope New Gospel.” Order is restored / All is right with the world.

“Ain’t looking for sympathy,” Wayne noted back then, “only serenity.”

Wayne, at 36, is young by life’s standards. The miles on his soul, though, are long. “I’ve been on the road since I was about 11 or 12 years of age,” he said. “I haven’t went home since.” The music has been both an escape from a world of generational poverty and street life he tried to kill himself over as well as a connection to a generation of fans who revere him as a rap savant. But do personal accolades still matter? Competition is, after all, the lifeblood of hip-hop. “[They’re] not as important,” Wayne told Elliott Wilson last week in his New Orleans’ CRWN interview, “as being the greatest father to my kids.”

Carter V’s final moments pan out like movie credits at the end of a coming-of-age film as the scope of Weezy’s emotional trauma merges with a haunting Sampha sample from 2013’s “Indecisions.” Let it all work out … let it all work out. It’s Cita, though, with the last words on the album. Her words are dampened in tears. She knows what her son has been through. She knows what she could never protect him from. She knows from what he has rarely protected himself.

A man of many bold words, Weezy’s been chasing those three his entire life.