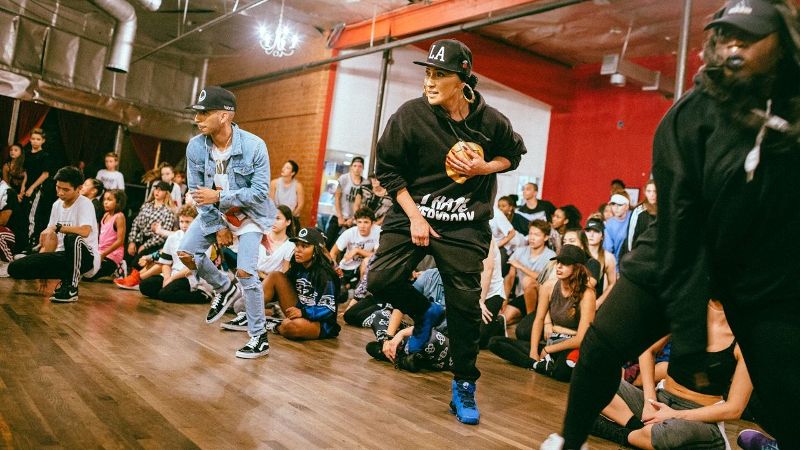 Halfway through her master class last Thursday at Millennium Dance Complex in Studio City, California, Tricia Miranda paused instruction and brought the attendees into a group huddle. Miranda had something she needed to share.

Over a hundred dancers surrounded her on the dark-brown dance floor in utter silence, their attention hyper-focused on one of the premier hip-hop choreographers in the world who stood before them dressed in her signature look: baggy pants, a hoodie and oversized bamboo earrings.

“Stop dancing and start performing,” Miranda told the dancers, after seeing they hadn’t quite captured the intended attitude of her choreography — a high-energy, hard-hitting piece set to Lil Scrappy’s “No Problem.”

Against the backdrop of the studio’s trademark slogan “Unity in Diversity,” she spoke while a roving television crew followed behind. It’s an atmosphere that has become second nature for Miranda, but for a majority of the dancers, many of whom were taking her class for the first time, the presence of the lens had changed their performance demeanor.

“Don’t let a camera keep you from doing what you love, in the place that you should be most comfortable. This space is our home,” Miranda said pointing to the camera. “Live YOUR life.”

This is Miranda’s world in a nutshell.

In 2014, she released a video from her class that was choreographed to Nicki Minaj’s hit song “Anaconda.” The performance, which was solely intended to promote her choreography for an upcoming dance tour, went viral and to date has 28.7 million views on YouTube. Since then, virality has become commonplace for Miranda, who has become one of the dance industry’s most sought-after talents, and whose videos have helped to raise the profile of the hip-hop dance community on an international level.

It was only a matter of time until a mainstream network caught wind of her success. In January, MTV will unveil “Going Off”, Miranda’s own show, which is inspired by her classes.

Miranda, a native of Yuma, Arizona, started as a trained ballet dancer — calling herself a “chola ballerina” who shaved the sides of her head and rocked hoop earrings and dark lipstick while donning her ballet shoes. In her late teens she co-directed a ballet company and received a full scholarship to the prestigious Joffrey Ballet in Chicago. But her dream was to be like the dancers she saw on television and her inspiration Tina Landon, who both danced with and choreographed for Janet Jackson. After moving to Los Angeles at the age of 21, Miranda knew it was time to truly pursue her dreams.

Her “big break” happened just three years later at 24 when she was cast as a dancer on Beyoncé’s “Ladies First” world tour. She later became a staple in the touring industry.

Miranda has gone on to tour with the likes of the Black Eyed Peas, Jennifer Lopez and Daddy Yankee. She has also been featured in music videos like Lopez’s “Do it Well” in 2007 (as a lead dancer), and Britney Spears’ “Circus” in 2008.

However, after 12 years as a video and tour dancer, Miranda said she began to lose her passion due to the high demands and oftentimes unfriendly environment. A taxing experience during the filming of Spears’ “Circus” video was Miranda’s last straw.

“My knees were bleeding from doing groundwork in the gravel, and I was just starting to feel over it — and I remember never having that feeling before,” Miranda said. “It’s not fair to take a spot from a hungry dancer who deserves to be there just to get a check. I’m not that person, that’s not for me.”

At the height of her game, Miranda took a risk and left the stage to pursue choreography full time.

Miranda has since dedicated herself to training the next generation of industry dancers who run as young as 8 years old.

“People always ask me do I miss dancing, and I don’t. I love being behind the camera,” said Miranda, who rarely appears in the videos she posts today. “I get more satisfaction out of seeing my dancers book jobs and perform. I’ve had my time to be in videos and do all that. Now, I want everyone to focus on my [students].”

As someone who knows both sides of the cutthroat industry she understands what it takes to make it. Miranda uses the camera as a tool to help her students become comfortable with dancing without an audience and in front of a lens — something that Miranda said used to terrify her as a dancer. Miranda’s respected presence and the demands of her choreography brings out the best in her students, especially in her classes. Simply put, she wants everyone to win.

“She demands something so brilliant in you. She’ll pull out the star in you,” said Darrion Gallegos, an assistant of Miranda’s who can be seen in most of her class videos. “She’s a visionary.”

Miranda has also gone on to choreograph for artists such as Gwen Stefani and Charli XCX, and brand commercials including Starbucks, H&M, Sprint and Sketchers. Most notably, Miranda co-choreographed Missy Elliot’s Super Bowl XLIX performance, a request she received from Elliott herself.

“Missy called me personally and was like, ‘Listen … I need four kids in my show and I don’t trust nobody else to work with children but you’,” said Miranda, whom met Elliot through the rapper’s protégé Sharaya J.

To be at a Tricia Miranda class is to be at a party — and that’s just the way Miranda wants it.

“My class is hype! It’s high energy, but it’s also educational,” said Miranda who described her style as being a combination of new school moves with old school energy. “Everything was hype and everything was big. I still bring that energy to my choreography.”

“When you walk into [one of her classes], you feel like something is going to happen. You’re going to witness something magical,” said Taylor Thomas, one of Miranda’s assistants who can also be spotted in her class videos.

It’s that infectious sprit which caught the eye of producers at MTV. After running through initial ideas, the collective settled on a series that centered around Miranda’s classes.

Each week, the show will follow Miranda as she instructs a class filled with some of the industry’s best young talents. At the end of each episode, one dancer will book a job for a new project of Miranda’s or of her various guest choreographers or musical artists whom she invites on the show. “Going Off” is like Miranda herself: genuine, transparent and intoxicating.

“A bootcamp for industry dancers is kind of what it looks like,” said Miranda, who added that the show is unique from other dance shows because of its focus on the creative process instead of solely a final product. “Nobody talks about the creators. We bring all of this to life.”

The show is produced by Radical Media and was co-created by Dave Sirulnick, who helped conceive MTV’s “Video Music Awards” and “Total Request Live.” So, the concept comes with great promise.

“You get to see the struggle, and it’s not a walk in the park,” said Allison Claire, who has been an assistant of Miranda’s for five years and recently danced on Janet Jackson’s “Unbreakable” tour.

Miranda hopes that the show will continue to push the profile of the dance community. Today, music videos can exist without the presence of an artist at all. And she actually did just that — having choreographed the music video for Iggy Azalea’s song “Team,” which features only Miranda and her dancers. The video has gone on to amass 75.7 million views.

“I think it’s great that social media has gotten as big as it has and we are being validated for our hard work,” Miranda said. “A lot of us are the creatives behind your favorite artists, and you just don’t know it. I only hope it gets bigger and better.”

This story is featured on espnW.com