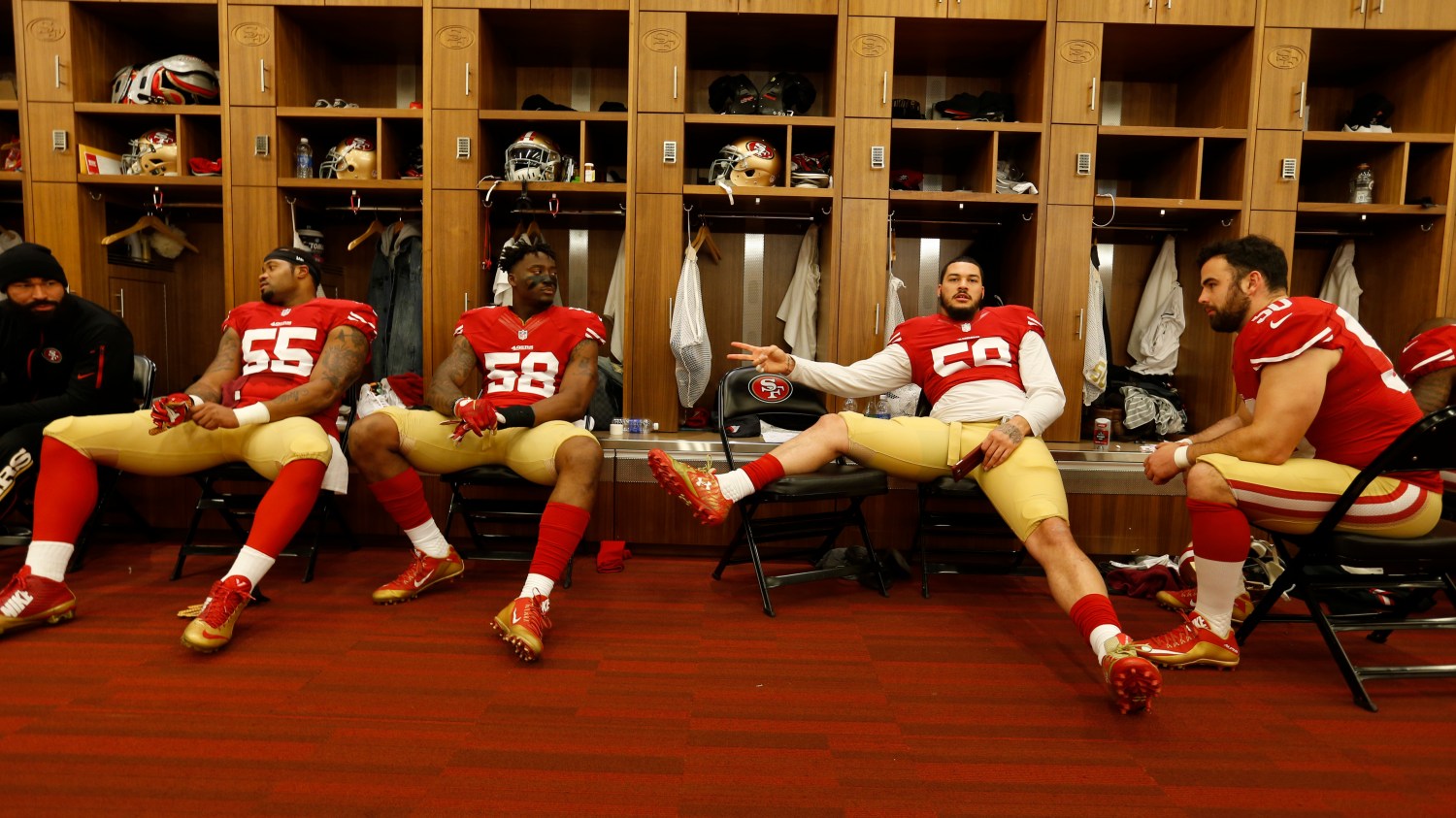 An exploration of candid conversations about black athletes and our communities

“Drain the Swamp,” a slogan for everything his supporters despised about Washington, “Lock Her Up,” his supporters’ fervent cry to put Hillary Clinton in jail, and “Build a Wall,” his promise to construct a 2,000-mile-long wall along the United States border with Mexico, all became keystones to an unorthodox campaign that pandered to bias and prejudice.

While those slogans have gradually receded, one phrase continues to resonate for me — and will give this regular commentary its name: “Locker Room Talk.” Trump used the phrase last October to pass off offensive misogynist remarks after an 11-year-old tape was released showing the president-elect bragging that male stars and celebrities don’t need permission to kiss and grope women.

Trump used the locker room — and its occupants — as a scapegoat to justify boorish talk and churlish behavior.

In our sports-crazed nation, where we play some form of organized athletics from cradle to grave, nearly everyone has had a locker room experience.

Locker Room Talk resonates with me because it describes a world with which I’m extremely familiar.

I have spent most of my life in locker rooms. Biddy Basketball at the Chatham YMCA in Chicago, Pop Warner football at age 12, high school football, then four years of college football.

As a professional journalist, locker rooms have been a second office.

Through conversations, anecdotes and videos, these commentaries will examine the language, topics, behaviors and personas that locker rooms produce. I will go inside boardrooms, where the rich and powerful hold a whole different manner of Locker Room Talk — often with no African-Americans present. Locker Room Talk will examine literal and figurative locker rooms, especially as they relate to black athletes and, by extension, to a far-flung black community.

Locker rooms exist in every city, every town and every village on earth. The American locker room is a unique cultural institution. The proliferation and popularity of big-time college football and basketball has given the American locker room a unique male-centric character. It also gave the president-elect a short-hand, wink-of-the-eye code he thought we’d accept. The locker room to which Trump eluded is a cesspool of male chauvinism and vulgarity.

I have certainly been in my share of regressive locker room spaces, beginning in high school where I learned to play “the dozens,” the patently male pastime of talking about each other’s mothers and girlfriends. As a college athlete, and as a professional journalist, I have been a part of locker rooms where knock-down, drag-out fights have broken out.

In 2013, New York Jets quarterback Geno Smith had his jaw broken by teammate IK Enemkpali in a locker room brawl. Locker room behavior and bullying made headlines that same year when Richie Incognito was accused by Miami Dolphins teammate Jonathan Martin of bullying and using racist and homophobic language.

In each case, the teams were criticized for not having strong locker room leadership to take care of the problems before they erupted.

The locker rooms I’ve known also have been spaces where teammates become familiar with one another and where relationships are formed. In the most successful sports organizations, the locker room, and the talk it produces, is the place where championship mettle is formed.

By far, the best locker rooms have been spaces where strong leadership emerges to work out differences and focus on the larger goal of winning. And the locker room is a private space where teammates confront and challenge each other to be better.

At halftime of the Dec. 26, 1964, American Football League championship game between the Buffalo Bills and San Diego Chargers, the Bills’ irrepressible fullback Chester “Cookie” Gilchrist pushed head coach Lou Saban aside as he was about to begin to talk to the team. Gilchrist told his teammates in explicit language that if Buffalo lost the game he was going to kick everybody’s ass in the locker room.

Paul Maguire, a linebacker on the team who told me the story years later, was in the locker room that afternoon. Maguire said that as Gilchrist spoke, “I was so far back up in my locker, the only thing sticking out of my locker were the tips of my shoes. If I could have got them up in farther, I would have because I knew he meant it.” The Bills won, 20-7.

A day later, on Dec. 27, the great Jim Brown asked the Cleveland Browns coaches to leave the team’s locker room. Brown had something he wanted to say to his teammates before they all took the field against the favored Baltimore Colts in the NFL championship game.

This had been another vexing year for black Americans — more race-related violence, protest tension. The Browns, who had several southern white players on the team, had not been without their own tension. Brown was not one for giving speeches and pep talks, but he told his teammates that the only way to beat the heavily favored 12-2 Colts was to focus 100 percent on the goal. The mission of winning an unprecedented title.

“To win that game,” Brown recalled recently, “we had to be conscious of what was at stake.” Brown told his teammates they needed to put everything aside — race, politics, anything — and focus only on one another and the task at hand.

The Browns won, 27-0, in one of the bigger upsets in NFL championship history.

Three years after the championship, Brown summoned the most visible black athletes to Cleveland to meet privately with Muhammad Ali to consider publicly backing Ali’s refusal to be inducted into the United States Army, as a conscientious objector.

This was not an easy discussion. Several of the athletes — Brown included — had served in the military. After an hour of rigorous conversation — candid Locker Room Talk — they emerged as a front and held a news conference the following day announcing their support of Ali.

Brown, 80, was immediately bombarded with criticism from those who felt he was consorting with the enemy. Brown was called a sellout and much worse.

I was neither surprised by nor disappointed in Brown’s decision to meet with the president-elect, but was dismayed by the ferocity of the attacks against him.

Brown, first and foremost, doesn’t care what anyone thinks about him — and never has.

Beyond that, his track record of helping young black men and black people in general is longer, deeper and wider than most of his critics. He also has a history of reaching out to disparate parties, including rival gang leaders in Los Angeles, and to community organizers to achieve a consensus.

Brown’s visit and the reaction it sparked underlined for me the need for a series of Locker Room Talks among African-Americans across disciplines and professions.

We’ve had our marches on Washington, Million Man March, Million Woman March, and there are hundreds of hashtags, blogs, chat rooms and conversations in cyberspace. There needs to be coherent conversations that take place in our locker rooms when the alarm is sounded, when the team needs to pull itself together. Everyone might be asked to leave, so the team can have a focused, often emotional meeting of the minds.

Yet, black Americans are not a monolith.

We are different in so many ways, though similar in specific ways of trying to deal with what the future holds for our communities and our country.

In this space, I will explore both literal and figurative locker rooms with blunt but enlightened conversation the president-elect could never have imagined.

Locker Room Talk, at its best, inspires soul-searching and recognizes any team that strives to be great must look inside of itself.

This is the Locker Room Talk I plan to help initiate.