Locker Room Talk: NFL blackballing of Kaepernick is a disgrace

Now that Miami has signed Jay Cutler, it looks like collusion among owners

We are heading into week three of NFL training camp, and quarterback Colin Kaepernick remains unsigned.

Kaepernick’s unemployment has been explained away — and, in some corners, justified — as a reaction to his political protests beginning last fall when he and others knelt during the playing of the national anthem.

But the issue here is not one player’s politics; it’s possible collusion among 32 NFL owners. Collusion, not politics, is what the players and the players’ association should vehemently be pushing back against.

Even as all manner of journeymen quarterbacks have been signed, from one whom Kaepernick beat out for a job in San Francisco to one who spent last season in the Arena Football League, none of the NFL’s 32 teams has reached out.

Kaepernick vs. the NFL is not a football issue and never has been. Anyone who believes that Kaepernick’s continued unemployment is about ability is being dangerously naïve.

And as long as the argument around Kaepernick remains about the flag, patriotism, one’s support of the armed forces and law enforcement, emotions will run high and cloud clearheaded thinking.

The tension inside the Under Armour Performance Center in Owings Mills, Maryland, when I visited last week was evident in the voice of a receptionist who answered nonstop phone calls. She could be overheard saying, “We are not answering any more calls about Kaepernick.”

She hung up, only to receive another call and repeat the message.

The Ravens are the current ground zero in the Kaepernick free-agent saga, which has gone on since March. No one is removed from the controversy, from the receptionist who takes the call to the Ravens’ front-office executives and owner Steve Bisciotti, who admitted that public reaction to the signing might play a significant part in the decision to sign Kaepernick.

When I arrived at the training facility, the Ravens were putting together a response denying a report, citing unnamed sources, that team president Ozzie Newsome and head coach John Harbaugh supported adding Kaepernick to the roster but were being blocked by Bisciotti.

By the time I left the facility, the Ravens had released a statement from Newsome: “We are going through a process, and we have not decided,” it read. “Steve Bisciotti has not told us we cannot sign Colin Kaepernick, nor has he blocked the move. Whoever is making those claims is wrong.”

I’m encouraged that some NFL veteran players are beginning to speak up. If a critical mass of veteran players begins to protest Kaepernick’s treatment, team owners may eventually be forced to yield.

Philadelphia Eagles safety Malcolm Jenkins said he believed that any team that shies away from signing Kaepernick is cowardly.

In an interview in The News Journal, Jenkins said, “This is just some other teams being, quite honestly, cowards, to say that they’re afraid of backlash to sign someone to make their team better when fans’ input has never been in the equation when it comes to signing people in the past.”

Jenkins said the blacklisting was a way to make an example out of Kaepernick “to discourage anybody else from doing what he did.”

Richard Sherman told USA Today’s Jarrett Bell: “For you to say you have to check with sponsors and fans because this guy took a knee and made a statement? Now if you told me this guy threw eight pick-sixes last year and played like a bum, had no talent, that’s one thing. But Ryan Fitzpatrick, Ryan Mallett or whoever is playing for the Jets right now — whoever is starting for the Jets is terrible — have jobs. You’re telling me fans would rather you lose and put a worse player out there because a guy took a stand? That’s where it’s so troublesome to me.”

That, of course, is exactly what owners are saying.

On Aug. 3, the Miami Dolphins were thrown into the mix after Ryan Tannehill’s knee gave out. Last season, Dolphins owner Stephen Ross appeared to support Kaepernick, or at least the four Dolphins players who knelt in solidarity with him.

Ross told reporters at the time: “I don’t think there was any lack of respect. Everyone in this team and whole organization respects the flag and what it stands for. These guys are making a conversation about something that’s a very important topic in this country. I’m 100 percent in support of them.”

But asked recently about Kaepernick, Ross said to @RapSheet that he did not believe fellow owners were colluding to blackball Kaepernick.

“If they think he can help them win, I would hope they would sign him,” Ross said.

The NFL needs one of its teams to sign Kaepernick or at least bring him into camp. The league has lost so much credibility over the past several years with its dishonesty over concussions, player safety issues and its handling of the Ray Rice domestic abuse episode. While several players with criminal charges have been allowed to continue their NFL careers, the league’s decision to apparently punish a player whose “sin” is being a protester invites revolt.

Former Ravens star Ray Lewis, who had his own near-imprisonment experience, urged Kaepernick to get on the field and let his play speak for itself.

That’s well and good, but first Kaepernick has to have a job. Which NFL owner will break ranks and sign Kaepernick?

From the moment last season that he took a knee during the national anthem, Kaepernick has presented us with vexing issues around patriotism, racism, and when and where dissent is appropriate.

But that was a debate for last season, while Kaepernick was kneeling and playing. 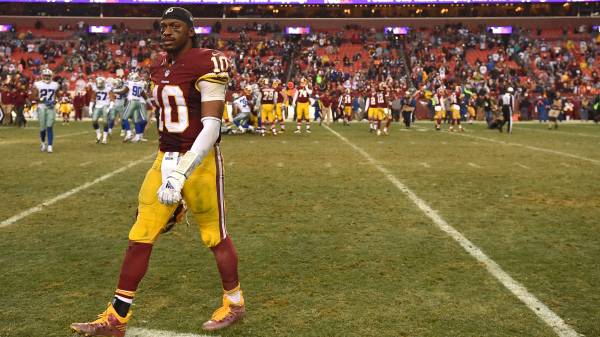 Robert Griffin III was a superstar. Then came the long slide Read now

Now that Kaepernick is unsigned and no team has answered his knock on their door, the most pressing concern for players should be the willingness of owners to lock arms and lock out a player whom they disagree with or see as a threat.

Today it’s Kaepernick. Tomorrow it may be you.