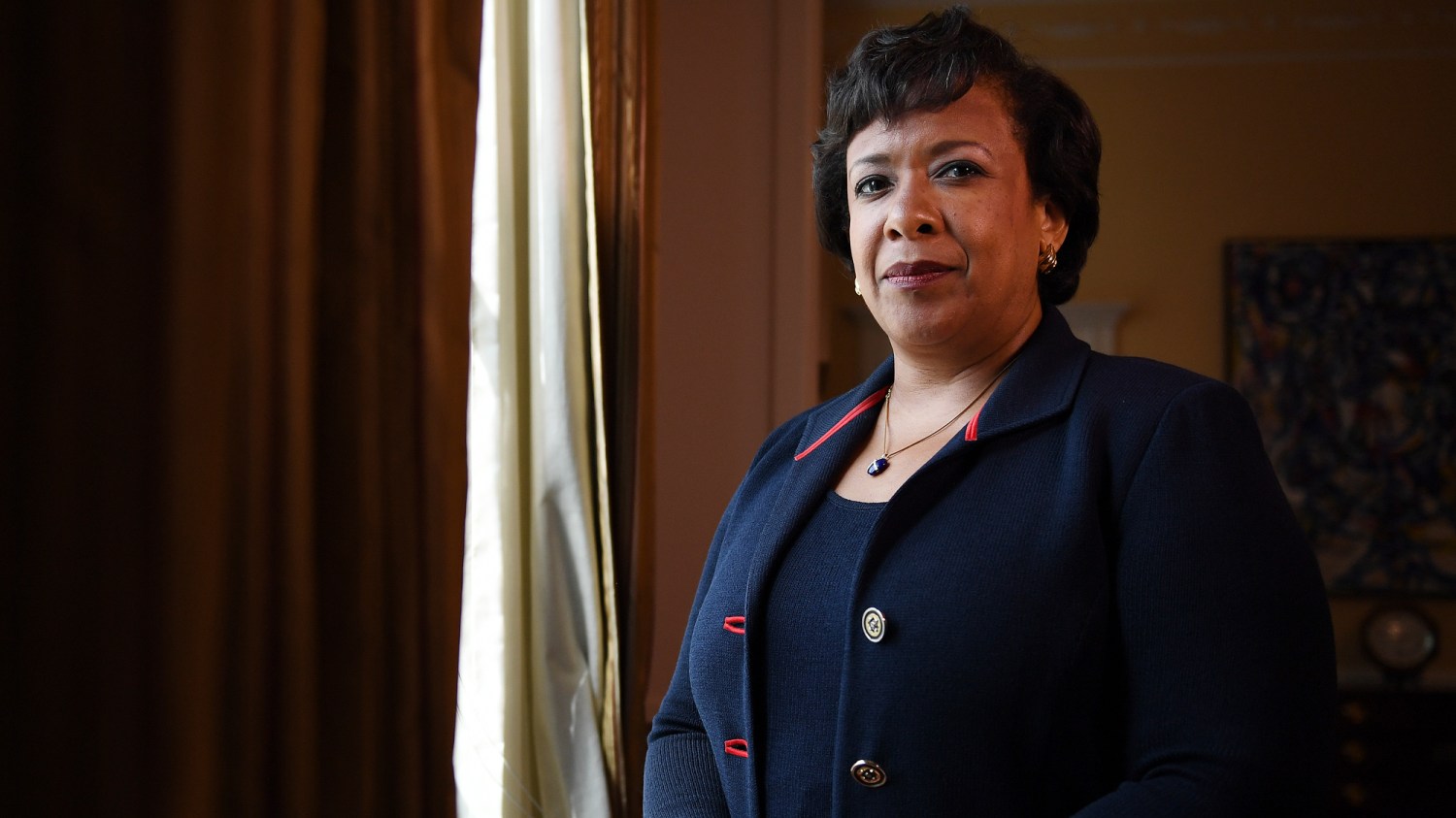 U.S. attorney general: ‘Talk about why you want to express your views on the national anthem’

By Michael A. Fletcher @fletchpost
October 3, 2016

It’s the one issue that has consumed Loretta Lynch more than any other since she took over as the nation’s attorney general 17 months ago: the fraying relationship between many communities of color and law enforcement.

The day she took office in 2015, rioting broke out in Baltimore, triggered by the suspicious injury that resulted in the death of 25-year-old Freddie Gray in police custody. That has been followed by a string of questionable police killings of black men and protests in cities including Baton Rouge, Louisiana; Falcon Heights, Minnesota; Tulsa, Oklahoma; and Charlotte, North Carolina. There also have been the deadly ambushes of law enforcement officers in Dallas and Baton Rouge.

The violence has left the nation on edge, while galvanizing a new era of activism and social awareness that Lynch calls “the issue of our time.”

Many people in poor, minority communities “have been dealing with these issues for years and felt like their voices haven’t been heard,” the nation’s top law enforcement official told The Undefeated Sunday as she sat below a portrait of black abolitionist Frederick Douglass in her office suite. “I think for law enforcement that wants to have a positive relationship with the community there has been a lot of frustration around this. And, obviously, we’ve seen so many incidents that have revealed so much pain and frustration throughout the country. Loss of life of both of civilians and of law enforcement.”

For Lynch, the first African-American woman to serve as attorney general, working to heal that growing divide has been job one — even as she juggles a range of pressing priorities from domestic terrorism threats to cybersecurity worries.

On Monday, Lynch will join Dallas Cowboys captains Jason Witten and Barry Church to host a youth forum aimed at healing the fractured relationship between police and the communities they are sworn to protect.

The forum will be streamed on Facebook Live and is part of two days of events that Lynch is holding in Dallas to launch National Community Policing Week, which will feature hundreds of similar gatherings around the country. Lynch will also be meeting with law enforcement officers and taking time to pay respects to the families of the five officers who were felled by a Dallas sniper in July.

Lynch sees the participation of the Dallas Cowboys stars as crucial, since professional athletes have the ear of young people who view much of society with suspicion. “Young people have a positive and powerful voice to play in this and they look up to athletes,” she said.

She noted that athletes certainly have helped spur awareness. San Francisco 49ers quarterback Colin Kaepernick’s decision not to stand during the playing of the national anthem at the start of football games has been followed by similar protests by other athletes, from the professional ranks to high school. It is something Lynch respects as a way to start a conversation, even if she sees it as just a first step in the painstaking task of forging a solution.

“My goal is to increase communication and foster dialogue on this important topic,” she said, adding: “People peacefully expressing their views is something that has long been protected and is an important part of our society. For young people, when they start focusing on issues and decide they want to express their views, I think we should encourage that.”

Some athletes might choose to kneel and sit during the national anthem, she said. Others will choose to work in community forums to foster understanding. All of it helps, she said.

“I hope people will take these protests as a starting point to talk about these issues, particularly young kids, as it goes down further and further into college and high school,” she said. “Talk about why you want to express your views on the national anthem. Talk about what it means to you. Is there something else about it that concerns you? What other ways do you have to show what is a great pride in this country or a great connection to this country?”

At the end of the day, Lynch said, the vast majority of people have the same goal: to live in safe communities where they feel respected and protected by police, not threatened by them. Police, likewise, want to feel respected, she said.

One irony, she said, is that police and people in communities distrustful of police often voice the same concern: that they are not viewed as individuals. Police often feel that they are not seen as individuals and are judged by the bad actions of a few. Similarly, many people in the community, particularly young black men, say the same about cops.

Lynch said her main goal is to nudge people past that. She said she is honored by her distinction as first black woman to be the nation’s attorney general. But she also worked more than two decades as a prosecutor, which required working closely with law enforcement. She’s also worked with community groups in areas hard-hit by crime and with people who have suffered civil rights violations.

Her experience, she said, has taught her to be sensitive to views on all sides of the debate over policing.

“My main role is to bring those sides together,” she said.