Losing N.C. A&T not only hurts the MEAC, it’s huge for the culture

Aggies to join the Big South Conference in 2021-22 season; Hampton is already a member

The decision by the black college powerhouse to leave one of the only NCAA Division I conferences solely dedicated to athletics at historically black colleges and universities (HBCUs) might have historic implications on the future of black college sports.

North Carolina A&T is a behemoth in black college athletics.

The Aggies have a nationally recognized track program. The men’s outdoor team finished ninth in the nation last season and the women’s team finished 13th.

The women’s basketball team ended the 2018-2019 regular season undefeated in MEAC play and in 2017-2018 found itself a few plays away from stunning perennial women’s basketball power South Carolina on its own home court in the first round of the NCAA tournament.

The men’s basketball team is currently in first place in the MEAC this season and has only lost one conference game.

And of course we can never forget about the dominance of the Aggies football team.

The Aggies have won four of the last five HBCU national championships and just completed a three-peat by defeating Alcorn State 64-44 in the 2019 Celebration Bowl.

Plus, the Blue and Gold Marching Machine finished No. 1 in the ESPN/The Undefeated Band Rankings last season.

The point I’m making is simple: N.C. A&T athletics are not just good, they are great.

And often with greatness comes exposure, notoriety and influence.

This institution’s athletic success may be celebrated the most by the people in Greensboro, North Carolina, but the benefits of its national prowess affect the entire HBCU landscape. That landscape will shift when the Aggies begin competing in the Big South on July 1, 2021.

A&T hurt the culture wit that move . I’m still a die hard but dang man, The MEAC what made us , that’s like me transferring after my sophomore year or sum .

The Aggies might just serve as the catalyst in the termination of HBCU sports as we know them.

“Our fans want to see us play other HBCUs for bragging rights,” said Brandon Parker, former MEAC offensive lineman of the year with N.C. A&T and a current NFL standout with the Las Vegas Raiders. “The pride of the HBCU goes out the window when you go to a conference like the Big South. I think it will also have a negative effect on the conference in the long run.”

The Big South is a conference that is composed of 14 schools in total but only 11 full-time members. Hampton University, a MEAC member for decades, left the conference in 2017 for the Big South. Kennesaw State, Monmouth, and North Alabama only compete in the conference with their football teams, so with the addition of N.C. A&T there will be nine teams competing in football.

The 11 full-time members are all geographically located among North Carolina, South Carolina and Virginia.

While not being obligated by their new conference to make trips to Delaware, Maryland or Florida in every sport will help N.C. A&T cut travel costs significantly, it seems that abandoning its HBCU roots could lead to the university paying an even steeper price than it could have imagined.

“You don’t want to see A&T go through the financial struggles some other schools are going through,” said Parker. “But from a moral standpoint, I don’t think it [moving conferences] is the right thing to do.”

Hilton said Friday there are challenges that the university will face in the transition but that he is extraordinarily confident that whatever the challenges are, it will be able to meet them.

“It’s scary, it’s a bet unsettling, a bit unnerving but A&T has a history of being unsettling,” said Athletic Director Earl Hilton. “We, as part of our DNA, look for ways to push boundaries, to move the needle, to go places we weren’t expected to go and be not what other people define us to be, but who we say we are.”

By not participating in the MEAC, the Aggies will lose out on receiving any revenue from traditional MEAC rivalry games that their fan base has come to enjoy.

The two best football teams in the MEAC last season were Florida A&M University and N.C. A&T. After a hard-fought win for FAMU in Tallahassee, Florida, N.C. A&T head coach Sam Washington had some interesting comments about the team down south.

Washington told reporters at a news conference the following Monday that he believed his guys had lost to a “lesser team” and that the Aggies fell into FAMU’s “trap.” 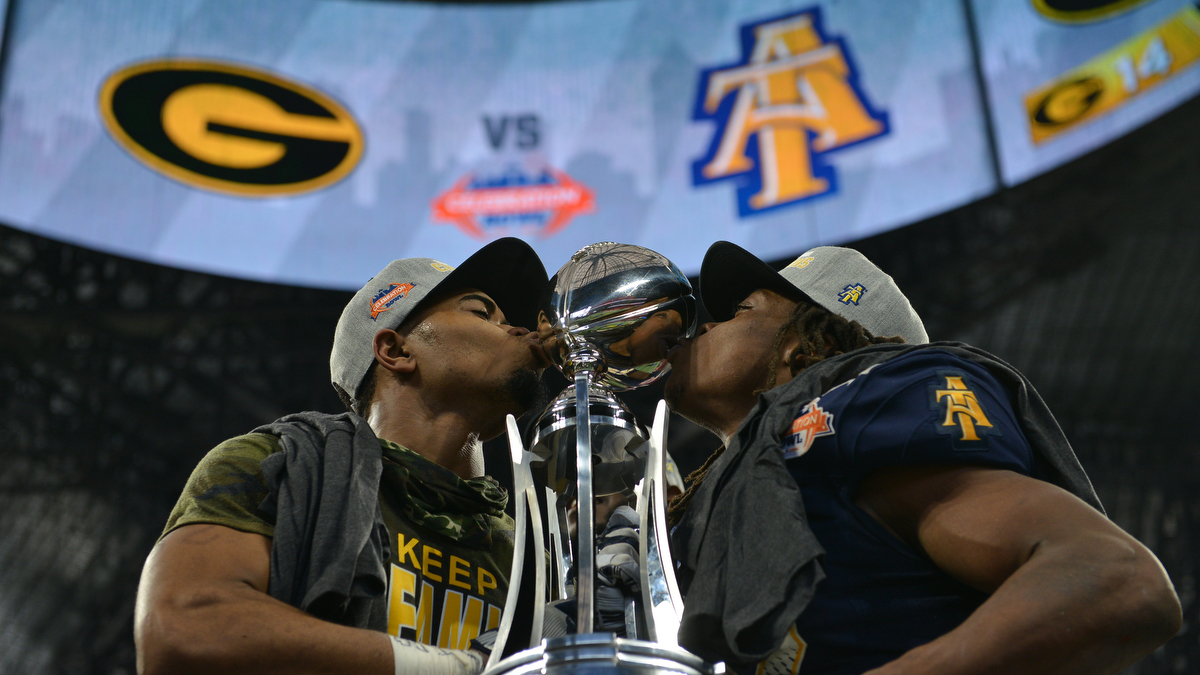 The comments sparked heated debates between fans from both schools on social media and left the stage set for a prime-time rivalry in the years to come.

However, because of N.C. A&T’s decision to switch conferences, this new-age rivalry will likely never truly come to fruition.

Instead, the university will ask its fan base to support the Aggies in games against teams such as Gardner Webb and Campbell, institutions that the typical HBCU fan will more than likely have zero interest in.

The Aggies will also forfeit the opportunity to play in the Celebration Bowl and be crowned a HBCU national champion.

The Celebration Bowl is the first bowl game of the college football postseason and it is aired nationally on ABC. In 2016, it was viewed by 2.7 million people and 2.3 million people in both 2017 and 2018. In 2019, it had 1.8 million viewers. This provides the school an extraordinary amount of publicity that very few other FCS contests have proven to generate.

The school has grown exponentially in enrollment over the past five years since the inception of the game in Atlanta. N.C. A&T has recently seen record numbers in enrollment from multiple freshman classes.

Not to mention the Aggies are able to net approximately $500,000-$600,000 from tickets sales and conference payouts every time they represent the MEAC in the Celebration Bowl.

Black College Player of the year finalist and star N.C. A&T running back Jah-Maine Martin did not agree with the school’s decision to leave the MEAC and it’s safe to say he represents a large portion of his peers who are trying to comprehend the university’s actions.

“It’s dumb,” said Martin. “We have gotten a million dollars three years straight from the Celebration Bowl. How can we not afford to travel?

“I feel like if we do that, we will lose our status as the No. 1 HBCU in the land and I think ticket sales will drop also.”

While N.C. A&T does have a strong fan base, the unwavering support the university is asking from its followers is at risk.

Hampton set the example a few years ago when it decided to leave the MEAC for the Big South.

As a result, the school has been considered by some as an outsider in athletics in a way that is similar to schools such as Tennessee State, which competes in the Ohio Valley Conference.

Like both of those schools, N.C. A&T will face an identical reality now that it’s moved on from the MEAC.

A reality that may not be as promising as the golden age it lived before.

Yet, Hilton is optimistic: “I hope we will be able to share with everyone who is concerned the reasons why this makes sense and they will continue to do what they have always done as Aggies and support our young men and women who wear the colors.”