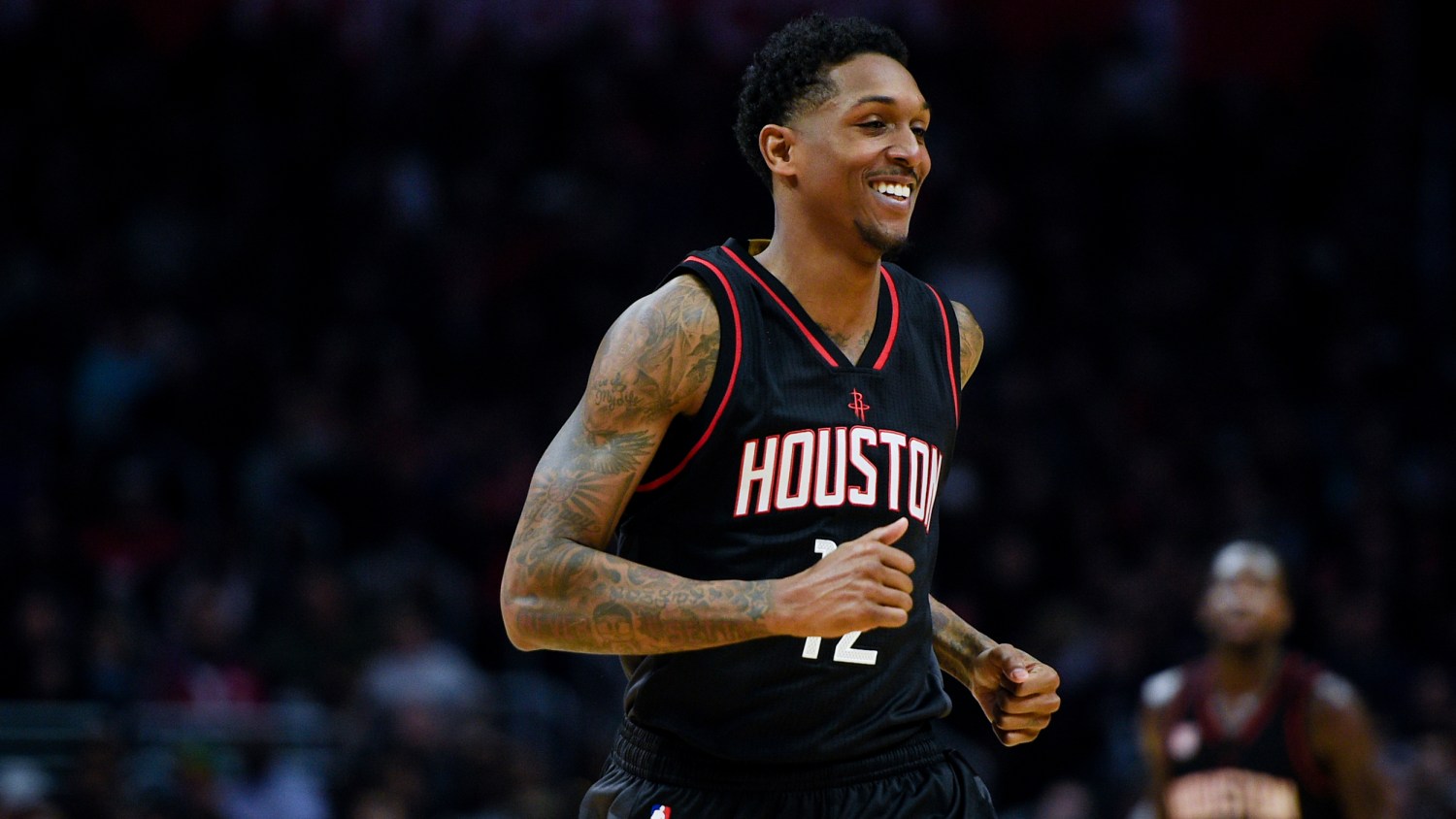 Houston Rockets guard Lou Williams in action during the second half of an NBA basketball game against the Los Angeles Clippers in Los Angeles, Wednesday, March 1, 2017. The Rockets won 122-103. AP Photo/Kelvin Kuo
NBA

Hot off the Houston bench, the part-time rapper, Iverson mentee and NBA star has lived a life that is … well, legendary

Last Thursday, Lou Williams woke up to an urgent text message after a late afternoon nap in New Orleans.

The text said his trade to the Houston Rockets had finally become official and he was due to debut in three hours. There was no practice or shootaround for the sharpshooting guard to prepare. But in typical “legend of Lou” fashion, Williams scored 27 points and nailed seven 3-pointers off the bench in his triumphant Rockets debut, spoiling DeMarcus Cousins’ debut with the New Orleans Pelicans on Feb. 23. Afterward, an impressed James Harden waited to walk off the court with his intriguing new teammate who only knew three offensive sets.

“That was a pretty decent introduction, I would say,” Williams said.

If you’re not familiar with Williams’ “Legend of Lou,” here’s a brief introduction. Whether it is scoring the basketball at will, turning a robbery into community outreach, rapping on a song with Meek Mill, being Allen Iverson’s mentee or dating two gorgeous women at the same time, Williams’ true stories are … well, legendary.

Case in point: On Christmas Eve 2011, Williams was driving in a Philadelphia neighborhood when a man approached with a gun drawn and knocked on the window. Despite the life-threatening scare, the then-Philadelphia 76ers guard eventually talked the struggling man out of killing him. The gunman recognized Williams and told him he liked his game and what he was doing for the Philadelphia community. Williams ended up buying the man a meal from McDonald’s and went on his way unharmed as an early Christmas present.

“That really happened to me,” Williams said. “The man recognized my face. It just so happened that the neighborhood I was in, I had done a lot of community work in. I was really in touch with those people in Philadelphia. When it got cold out, we bought coats, we bought hats, we bought gloves. When it was hot, we had camps where we had ice cream for the people.

“He told me he had seen me around and I was able to touch people. Whatever he was going through, for him to look me in my eyes and understand I was one of him, we were able to work a deal out.”

Williams has also been mentioned in rap songs from hip-hop stars Drake and Meek Mill. And he can spit bars, too.

Williams collaborated with Meek Mill on the song “I Want It All,” rhyming such verses as, I made my first mill told moms I was leaving home/Then I made 30 more God damn I was puttin’ on/I used to dollar menu and spectate at the mall/But now I’m buying that b—- out, cuz s— I want it all.” Williams rapped on “I’m On My Dip,” with rapper Gillie Da Kid and NFL star wide receiver DeSean Jackson. Williams told LakersNation.com that he has recorded numerous rap songs that he has not released.

“Obviously, music is a hobby for me,” Williams, 30, said. “Basketball always comes first. I always keep my priorities in check. I had some music I was going to release. It just didn’t fold out that way.”

The “Legend of Lou” probably reached its height when the website Baller Alert reported that Williams was in a relationship with two women in December 2014. There were several photos on social media of Williams with Ashley Henderson and Rece Mitchell. They weren’t shy about it as the three hung out publicly and even took vacations together. Both waited for the then-Toronto Raptors guard once after a road game against the Golden State Warriors. Williams reportedly affectionately called them “Blonde” and “Brown” for their different hair colors. Drake even rapped about Williams and his two ladies in the song “6 Man”:

“It’s legend, right? You got to let legend be legend, ” Williams said when asked about his relationship with Henderson and Mitchell. “You don’t speak on legend. You just let it be what it is and let people assume and say what they want to say.”

The legendary Lou also had a unique NBA mentor in Iverson, a Naismith Memorial Basketball Hall of Famer.

Williams was drafted by the Sixers out of South Gwinnett High School with the 45th overall pick in the second round of the 2005 NBA draft. At that time, Iverson — a 2001 NBA MVP — was a superstar with the Sixers in the midst of his final roller-coaster days with that franchise. Williams said he learned a lot from the 11-time NBA All-Star on and off the court that he applies to his life today, including his recent Rockets debut game.

“Just stay ready. I played with A.I., whose favorite saying was, ‘Stay ready so you don’t have to get ready,’ ” Williams said. “That is one of the mantras I took with me, the gems he gave me. That is always how I patterned myself and prepared for every situation …

“I learned a lot from just the way he approached the game. A little dude that would go out there feeling like he is 7-2. Being able to line up next to him, having the ability to compete with him, seeing how he competed for games, that was one of the career-changing experiences for me.

“I’ve seen him sick, I’ve seen him beat down, laying on the training table with 30 minutes on the clock, get up and put his stuff on and get 40 like it was nothing.”

Williams enjoyed vacation time in the Dominican Republic during the recent NBA All-Star Weekend before going to his hometown of Atlanta for the final stretch. He expected to return to Los Angeles as a member of the Lakers. New Lakers president Magic Johnson, however, agreed to deal Williams to the Rockets for swingman Corey Brewer and a 2017 first-round pick two days before the trade deadline. While Williams worked hard to help the struggling Lakers rebuild, he appreciated being sent to a championship-caliber situation with Harden and the Rockets.

In true “Legend of Lou” fashion, Williams actually got word of the trade from his best friend while working out at his old high school.

“I was about five minutes into my workout when my best friend’s phone started ringing,” Williams said. “I got on him a little bit and told him to turn his phone off so I could get some work done. He looked at his phone and said, ‘Man, it’s your agent.’ I said, ‘My agent is calling you?’ He said, ‘Yeah.’ Then I said, ‘Something happened.’

“I just took a deep breath and took everything in. After that, I was excited when I started thinking about the personality of this [Rockets] team and the way these guys play, the position they are in, in the West. Obviously, it’s going to be a playoff run, so I’m excited about that.”

Williams was averaging an NBA-reserve best 18.6 points per game for the Lakers at the time of the trade. The 2015 NBA Sixth Man of the Year entered Wednesday’s game against the Los Angeles Clippers averaging 24 points and 4.7 3-pointers off the bench for Houston. In just a week’s time, Williams appears to be a perfect match for the 3-point-thirsty Rockets. He has scored more than 25 points off the bench in two of his first three Rockets games, and is averaging 19.8 points and 3.8 three-pointers in 25.1 minutes with the team.

“I just felt like I would fit in with the style of play they have,” Williams said. “With the identity of the team, I felt it was something I could contribute to.”

With his scoring average rising with the Rockets, Williams is a growing favorite to win the 2017 NBA’s Sixth Man of the Year award again. Such an accolade would just add another chapter to the “Legend of Lou.”