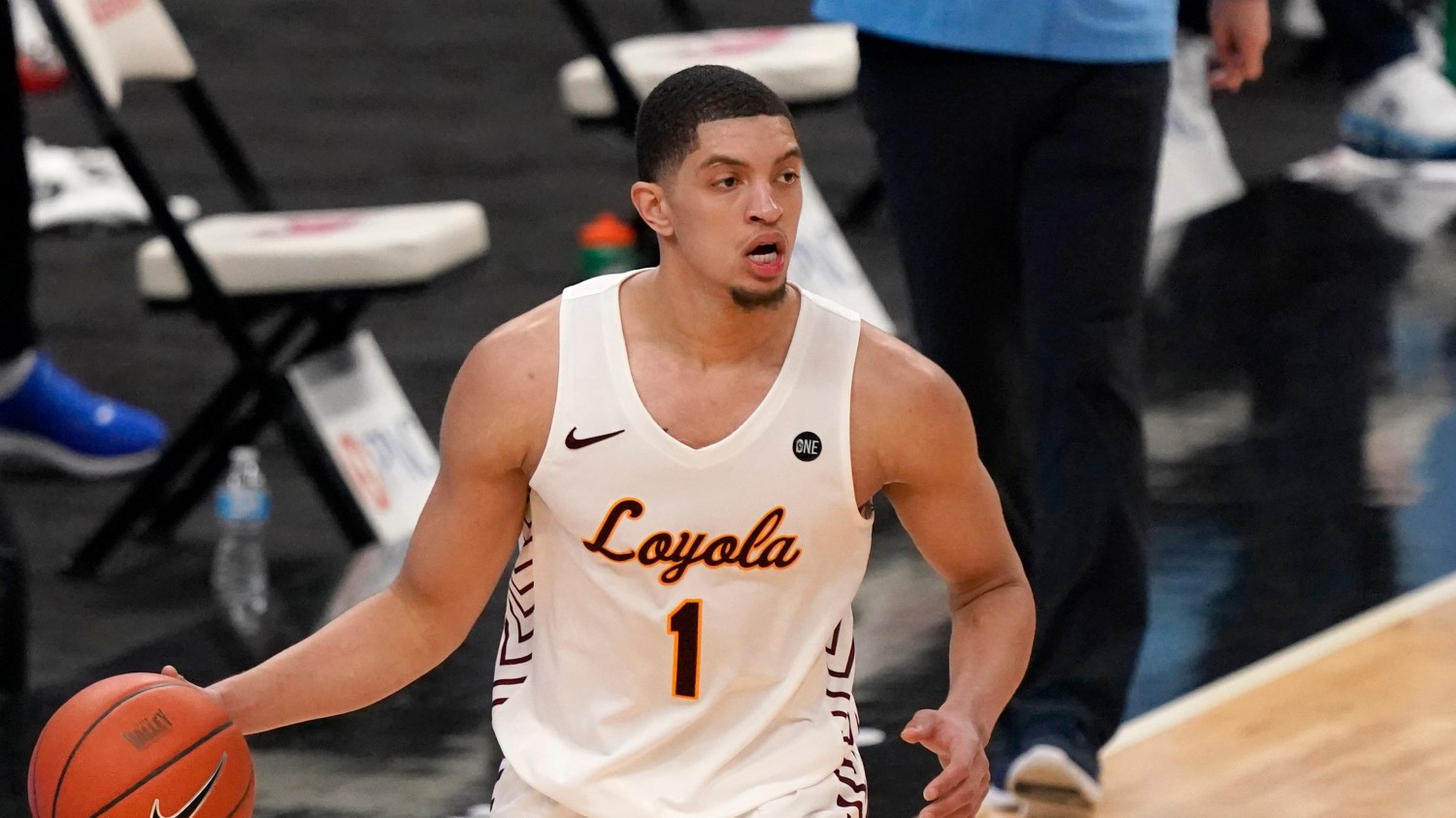 Loyola Chicago’s Lucas Williamson brings the ball down the court during the second half of an NCAA college basketball game against Indiana State in the semifinal round of the Missouri Valley Conference men’s tournament on March 6 in St. Louis. Jeff Roberson/AP Photo
Men's NCAA Tournament

Ramblers looking to go beyond their 2018 finish, all the way to a national title

Lucas Williamson embodies the mantra of the Loyola Chicago Ramblers.

Donte Ingram embraced the mindset as a senior on the Loyola Chicago team that got to the Final Four in 2018. Now, Williamson takes the mantle. He’s a part of the leadership group on a Ramblers team with desires to get back to the Final Four. After wins over Georgia Tech and No. 1 seed Illinois, Loyola Chicago is now the talk of the NCAA tournament.

In 2018, Loyola Chicago became the Cinderella story of the NCAA tournament. Sister Jean, the team’s chaplain, became a cultural icon.

Williamson was a freshman on that team, appearing in all 38 games during his rookie season. Ramblers fans remember Williamson contributing eight points in the Elite Eight game against Kansas State en route to Loyola Chicago qualifying for its first Final Four since 1963.

Three years later, Williamson is now a senior, with a wealth of experience and knowledge as he attempts to get his team back to the Final Four.

‘He knows what it means to win’

Tyrone Slaughter could talk about Lucas Williamson for hours. The head boys basketball coach at Whitney Young High School in the West Loop neighborhood in Chicago, Slaughter has seen many young players come and go over the years.

None had the long-lasting impact of Williamson.

“Lucas is a winner,” Slaughter said. “He knows what it means to win.”

Slaughter remembers Williamson playing at local tournaments when he was in grade school. He didn’t blow people away with his dribbling or shooting. But he knew how to play the game.

“He had great marketable talent and skill level,” Slaughter said. “We could always count on him doing the right thing.”

Williamson grew up in Chicago, a hotbed for basketball talent. His father, Lucas, nurtured his son through sports. His mother, Louiza, worked at a local YMCA, which had a basketball court.

There’s no doubt Williamson had tremendous parental support. But taking his development to the next level required internal motivation.

“The journey was equally as fun for Lucas as the destination,” Slaughter said. “It was always about the team, the end result. He was the nicest kid you’re going to meet off the court. But on the court, he was a ferocious competitor. Those were the combinations that made him a leader on the court and in life.”

Williamson and Slaughter connected when he enrolled as a freshman at Whitney Young. He played on a team loaded with talent, including Jahlil Okafor, Paul White, Miles Reynold, and Erwin Henry. Having Williamson around the older players made them better. He wasn’t the loudest on the team, but he led through his actions and work ethic.

“No one is going to outwork Lucas,” Slaughter said. 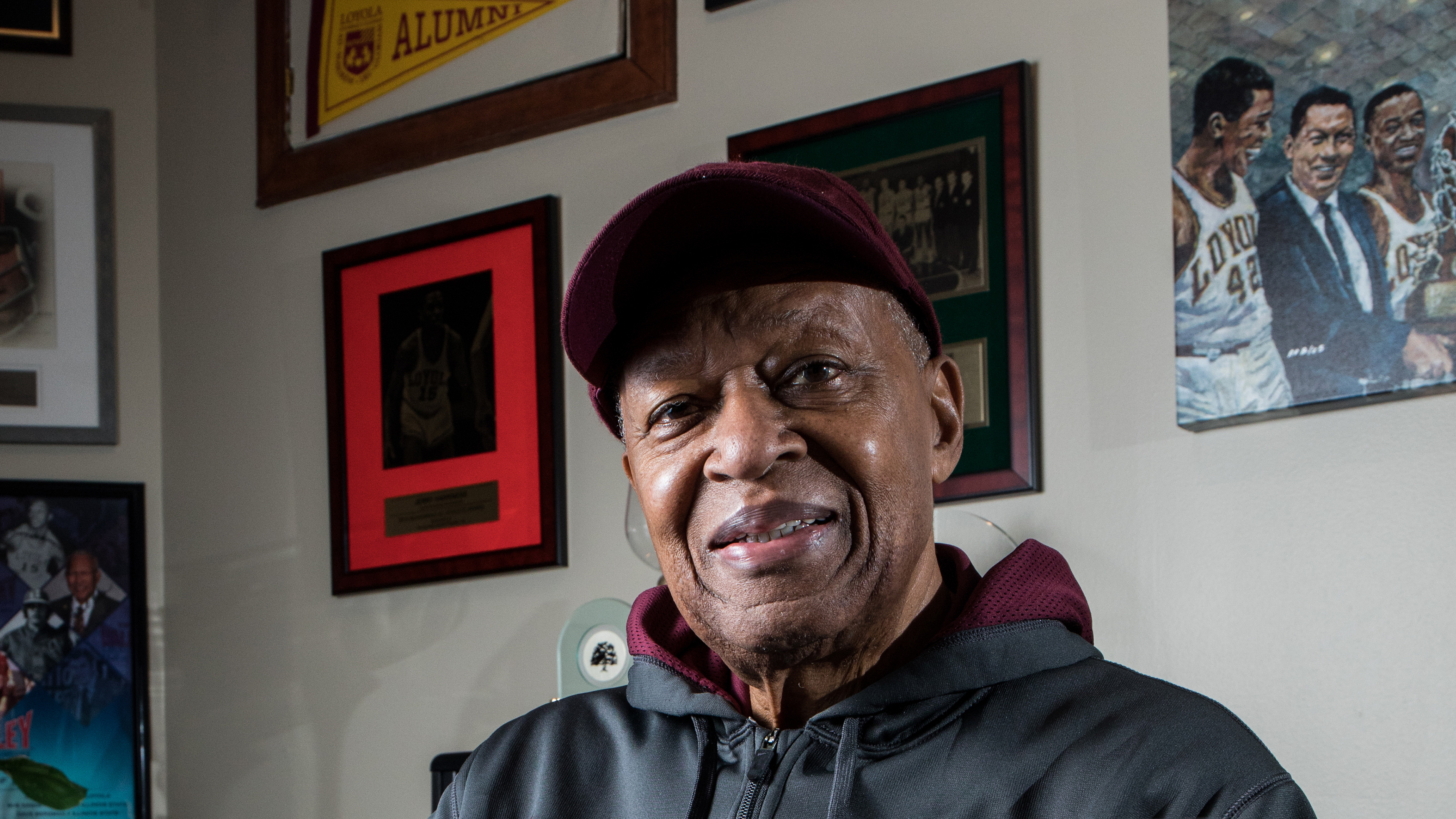 As the only freshman on Whitney Young’s varsity team, Williamson helped the team win an IHSA Class 4A state championship. He continued to work on improving his shot and getting stronger and in his senior year, he became the leader of the team. Whitney Young entered the season as the seventh-ranked team in the state.

One of Williamson’s standout games came in the Supersectional at Chicago State against Evanston. Williamson guarded Evanston’s best player, Nojel Eastern. They played together in AAU and were now competing against each other for a chance to get to the Illinois High School Association (IHSA) championship.

Evanston went on a run, with Eastern converting on several big plays. Whitney Young put the ball into the hands of Williamson, their experienced senior, to change the momentum of the game.

With the ball, Williamson went through the entire Evanston team and threw down an emphatic dunk to bring the Dolphins fans to their feet. Evanston called a timeout. Williamson ended Evanston’s run and their chance to win the supersectional.

“That’s the epitome of Lucas,” Slaughter said. “They were trying to make a run and Lucas answered the run. He always made plays that stopped runs, that allowed us to win in situations where we probably should’ve lost. That’s why he’s a winner. He just makes winning plays.”

After defeating Evanston, Whitney Young squad went on to win the state championship. He became the only player in Whitney Young’s history to win two IHSA state titles. During his senior year, he averaged 17.5 points, 4.8 rebounds, and 2.1 assists per game, earning First-Team All-State honors. Despite this, Williamson received only a few offers from mid-major programs.

Loyola Chicago had the 6-foot-4 Williamson on its radar but didn’t make a scholarship offer until the end of the recruiting period. Many young players want to leave home for college. For Williamson, staying home allowed him to continue being one of Chicago’s top young players.

“The allure to go away in college is so powerful,” Slaughter said. “When kids like Lucas stay home, it’s a positive and I think we should celebrate it. When you’re able to stay home where you grew up, with friends and family watching you consistently, I give those people a lot of credit. For the commitment to stay home and to help build a program.”

Always working for the team and unity

Loyola Chicago enters its Sweet 16 matchup against Oregon State as the top defensive team in the country, giving up an average of 55.8 points per game. Cameron Krutwig, also from Chicago, and Williamson lead the Ramblers in scoring, averaging 15 and 8.8 points per game, respectively.

While winning a national championship is the ultimate goal, Williamson is using his platform for different reasons. Since the death of George Floyd in Minneapolis last year while in police custody and the subsequent racial reckoning that America is experiencing, Williamson is active in speaking out against anti-Black racism. Over the summer, he spoke to his teammates on a Zoom meeting, discussing racial justice issues affecting America. He also penned an op-ed column in the Loyola Phoenix to discuss “the plague that haunts the United States.”

“In a country that prides itself on freedom and equality, we will never truly be free and equal until we acknowledge that a virus has infected the United States. It has caused many to lose jobs, homes and in many cases, their lives … This virus is called racism. And it needs to end, and end now.”

Williamson is also a narrator and co-writer with The Loyola Project, a documentary about the 1963 Ramblers national championship team. In the backdrop of this historic victory was the racist vitriol aimed at many of the Ramblers players. They received death threats from the Ku Klux Klan and were forced to eat in segregated restaurants.

“The things that occurred this past summer encouraged a lot of people to speak up and to speak out,” Williamson said. “It gave me the confidence to go out there and speak on things that I feel confident about. You can’t have a debate when you’re talking about human rights. It’s either right or it’s wrong.”

“There’s not a prayer that goes by before our games where we don’t bring up unity and equality with our country,” said Loyola Chicago head coach Porter Moser. “We got to keep constantly learning what these people are going through.”

Loyola Chicago enters the Sweet 16 brimming with confidence. For Williamson, the “We Ain’t Going” mantra will be on display, trying to take the Ramblers back to the Final Four.

The ultimate goal is winning basketball games. But Williamson has won off the court and in the classroom, in how he carries himself and how he raises awareness about social issues.