Magic Johnson could’ve just ridden his dragon home. And yes — that is the obligatory Game of Thrones reference.

He’d won. He was out. Johnson infamously stepped down as president of the Los Angeles Lakers in early April with that impromptu, awkward news conference on the final day of the team’s season, citing “backstabbing” and just not having fun at the job as reasons for his sudden resignation. He was going to go back to being Magic Johnson: businessman, big brother to superstars, beloved legend.

Except he didn’t. This week, even after hearing the bells, he decided to just burn everybody.

When Johnson sat down with Stephen A. Smith, Max Kellerman and Molly Qerim on ESPN’s First Take to discuss his departure, his problems with former colleague and current Lakers general manager Rob Pelinka and the future of the organization, the Hall of Famer was his usual gregarious self. He was jovial even as he took a sword to some of his former cohorts and effusive in his praise of the superstar he’d helped the Lakers sign. 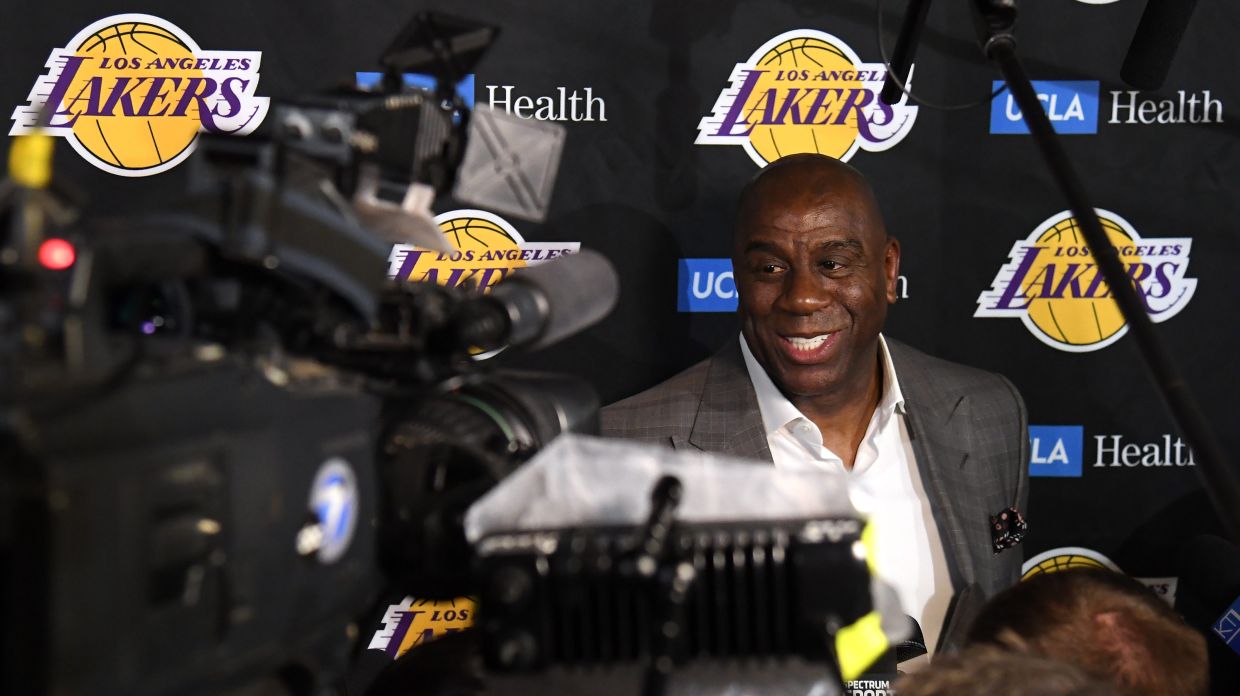 For the past month-and-a-half, LeBron James has been a franchise player caught in the crosshairs of Magic Johnson’s drama. Magic may have nothing but love for LeBron, but he isn’t showing James much respect in how Johnson’s handled this “exit” from the Lakers.

“My right hand comes to me and says, ‘Magic just stepped down,’” James infamously said on his barbershop-set HBO talk series The Shop in early May, reflecting on how he learned about Johnson’s surprising resignation announcement. “I’m like, ‘You mean from out of his car? Get the (expletive) out of my face.’ … He’s like, ‘Go check your phone.’” James’ comments on his show indicated just how shocked and frustrated he was with how Johnson had handled this. “I came here to be a part of the Lakers organization,” LeBron explained. “Having a conversation with Magic and really kind of breaking it down and saying how we was gonna make this Showtime again–and I wanted to be part of that process. So, it was weird for Magic to just be like, ‘Nah, I’m out of here.’

But when asked about LeBron’s reaction, Magic told First Take this is how he does things.

Johnson made clear to anyone watching that he is “not a regretful person” and that he believes he has the right to do what he believes is best for him as an individual.

“I could’ve done it a different way. Yes, [LeBron James] is right,” Johnson acknowledged. “But I did it my way. And that doesn’t take anything away from our relationship, or how I feel about LeBron.

“Sometimes, as a man or a woman, you’ve got to make decisions based on your own happiness. And sometimes, you just have to go out and do your thing. And that’s what I did.”

Johnson is right — he is a man whose status affords him a lot of leeway. In the world of basketball, the three-time MVP can do almost whatever he wants. He can bash his coach publicly and get him removed from his job, as he did in 1982 as a 22-year-old when he went to the press with his frustration with then-Lakers coach Paul Westhead. He can coach the team himself and step down when he realizes he’s in way over his head — as he did in 1994 for 15 games after he’d retired as a player in 1991. He can come back as a player at a new position and disrupt a young team’s chemistry, as he did in 1996, before abruptly retiring (this time for good) with no notice to the team. And he can step down as general manager when things stop being “fun” without giving any notice to the star he recruited to the team on the strength of his own legacy and charisma.

It’s not about what Magic Johnson has to do. It’s about what Magic Johnson should’ve done. And that isn’t to ignore the professional uncertainty James is now facing after having signed under Johnson’s watch. And it definitely is not continuing to twist the knife by bashing an organization James is still playing for — an organization that desperately has to recruit top-banner free agents just to steady the course Johnson himself charted. The Lakers are reeling from Johnson’s messy departure, a botched coaching search that yielded Frank Vogel (and Jason Kidd by proxy) and increasing chatter about dysfunction at the top of the organization.

But Johnson says he believes that road map is still set and he expects it to still yield rewards.

“It’s gonna happen,” Johnson said of James winning in L.A. “Just like me going back to my business and doing what I’m doing, LeBron’s gonna win that ‘ship. He’s going to be in that room recruiting.”

James is the most famous basketball player in the world and one who has built a brand outside of basketball that looms large in the culture. That’s both popular culture and black culture specifically. He will make clear his feelings on the sociopolitical issues that so many face in this country. His television and film production has yielded everything from sitcoms to vibrant documentaries. He is someone who makes it a priority to show the necessity for stars to give back to and build the communities that have birthed so much art and culture. When James signed with the Lakers in the summer of 2018, it wasn’t incidental that the man who was at his door (“At 9:01,” Johnson pinpointed on First Take) was the man who probably could most relate to his journey.

Like James, Earvin Johnson was a kid from the Midwest who was a phenom before he was old enough to vote. Like LeBron, Magic was a formidable young NBA star who rewrote the rules for what a “big guy” could do on the perimeter with an inside-out game that defied traditional positions. Like LeBron, Magic became one of the game’s most transcendent stars (while also vying for Biggest Star in the NBA with high profile, uber-scoring 2-guards overlapping the same era). And like LeBron, Magic understood that he could be even bigger than basketball, tapping into media and moguldom with as much fervor as he dished the rock or drove to the basket. Magic’s entrepreneurial passions made for thriving businesses in black communities, and LeBron’s media ambitions have yielded opportunities for black creatives.

Nobody could relate to LeBron James like Magic Johnson. And that helped in recruiting James to Los Angeles. Seeing a former great of Johnson’s stature at the helm of basketball operations could’ve been a comfort to James as he joined an organization in flux. The Lakers failed consistently at recruiting marquee free agents before landing James. Johnson’s presence had to matter to James. But Johnson didn’t seem to care about any of that when he was ready to go. So when James sat in the barber chair and expressed his frustration with how things had unfolded, Johnson had to know he’d left his guy in the lurch. However Johnson may feel about Pelinka or Jeanie Buss, James was someone whose affiliation was directly through Johnson. He should’ve respected that enough to level with him. Because that’s what a man does.

Johnson certainly seems happier without the job. He says he’ll still be at Lakers games, and there’s no reason to doubt that. This is still family, and Magic Johnson is still Magic Johnson. But here’s hoping he recognizes that certain relationships are what they are not because we have to think about the other person — but because we respect the other person enough to not have to be told that we should.