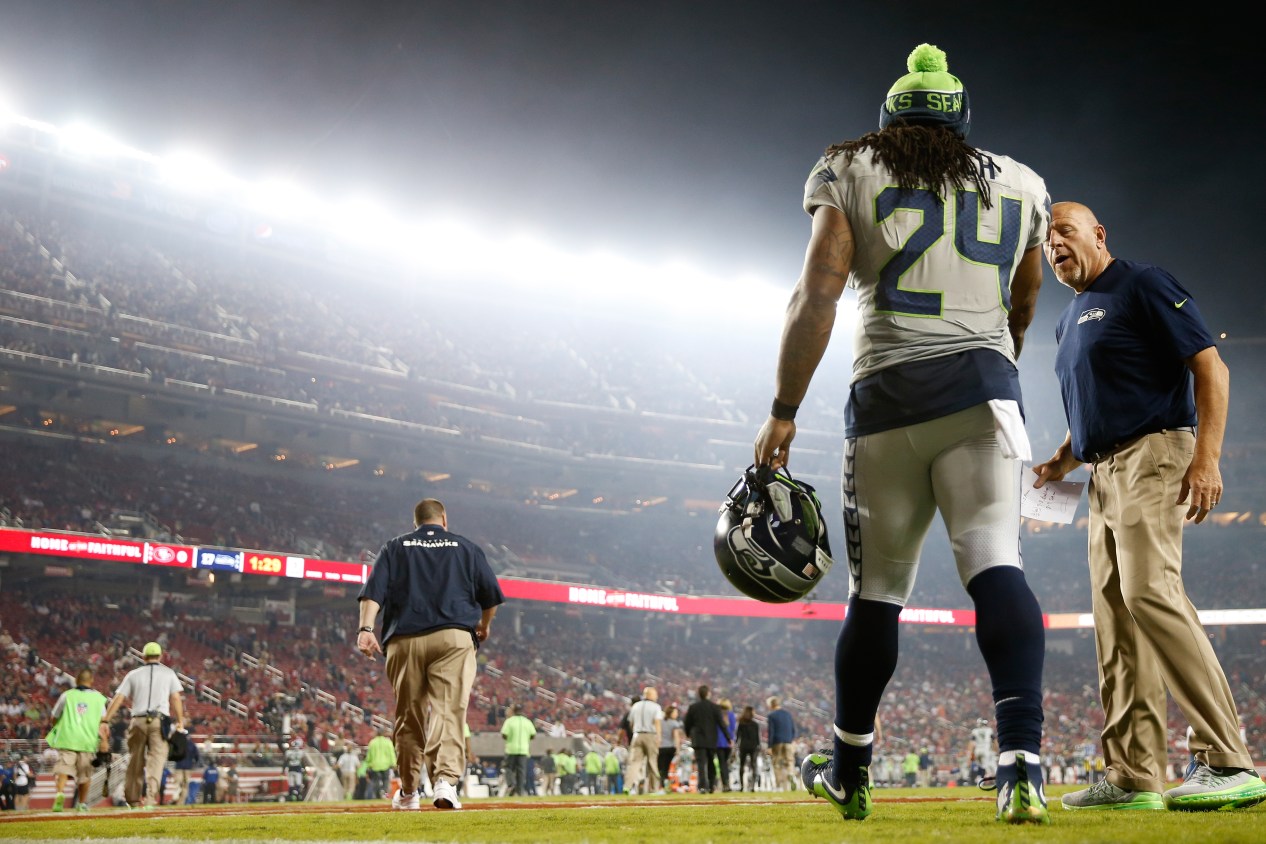 Marshawn Lynch #24 and the Seattle Seahawks take the field for the second half of their NFL game against the San Francisco 49ers at Levi’s Stadium on October 22, 2015 in Santa Clara, California. Ezra Shaw/Getty Images
NFL

Without Marshawn — the game done changed

After a powerful ‘Conan’ appearance, it’s fascinating to ponder how Lynch might have participated in this season of protests

The life span of an average NFL running back is 2.57 seasons. Marshawn Lynch played nine, amassing over 1,000 yards in seven seasons, and totaling 74 rushing touchdowns. So it was no surprise, him being riddled with injuries last year, that the writing was on the wall. Lynch had even contemplated retirement the summer before. The league’s most engaging personality who didn’t give a damn about engaging with anyone (especially the media), didn’t need football. And he wasn’t going to look back once his time in the league was over. Enigmatic star power ensured a fruitful life long after breaking down zone defenses and leaving linebacking corps and secondaries in his wake.

Late-night television fell in love with his straight outta Oakland, California, demeanor. Conan O’Brien may have bought weed with Ice Cube and Kevin Hart. He swapped snowboarding war stories with Lil Wayne and Tony Hawk. O’Brien once even picked apples with Mr. T. But his recurring bond with the retired (and loving it) Seattle Seahawks and Buffalo Bills running back is his most hilariously authentic. They’re an odd couple. They’ve ventured into everything from video game reviews, wine tasting and jumping into a pool of Skittles together.

Lynch appeared on TBS’ Conan Tuesday night. Their banter followed the lighthearted blueprint we’re used to, an anomaly given Lynch’s interaction with the media during his playing days. That is until Conan addressed the elephant in studio, and asked Lynch his thoughts about San Francisco 49ers quarterback Colin Kaepernick’s decision to kneel during the national anthem. A topic which, had he still been in the league, would have swirled around Lynch, one of the most candid forces in the NFL, throughout the season. Though the two never took shots at one another or ever took the field at the same time, Kaepernick and Lynch played key roles in the Seahawks and San Francisco 49ers’ bitter, violent and heated rivalry of the mid-2010s. Tuesday night, though, Lynch kept it a hundred.

The reality is, the Seahawks’ unity protest did little, if anything, to advance the conversation.

“I’d rather see him take a knee than stand up, put his hands up and get murdered,” Lynch said, mimicking the act of hands-up-don’t-shoot. “My take on it is, s— has to start somewhere. If that was the starting point, I just hope people open their eyes to see there’s really a problem going on and something needs to be done for it to stop.”

If it doesn’t apply, let it fly, Lynch believes. “If you’re really not racist, you won’t see what he’s doing as a threat to America, but just addressing a problem that we have.”

Lynch’s retirement announcement via Twitter was fitting, classic “Beast Mode.” Few words, but powerful imagery. He walked away the master of his own fate; the captain of his own soul. His “life after football” world tour only hammers home the point.

In 2016 alone, Lynch ghost-rode camels in Egypt as part of American Football Without Barriers camp. Wolverine actor Hugh Jackman heaped high praise on his individuality. He held his 10th annual football camp for his Fam 1st Foundation, and also became a part-time Uber driver (in his Toyota Prius). Practiced with an Australian rugby team. Test-drove cars in NSFW (not safe for work) fashion. Tried his hand at Willy Wonka’s day job. And followed in the footsteps of President Barack Obama, Shaquille O’Neal and Deion Sanders as a guest on the NBC’s Running Wild with Bear Grylls. On that show, Lynch opened up about his life’s truest passion: community involvement and development.

“We’re about empowering underprivileged youth in the inner city,” he said of his foundation. “Our biggest thing is we got babies killing babies from where I’m from right now. We get through to that one kid, who knows where he end up? We do a lot for them — financial literacy — we give scholarships.”

Yet, as Lynch enjoys life free from film sessions and defenses stacking the box to try to slow him down, it’s impossible not to ponder what the league would be like if Beast Mode were still beasting. Not necessarily from a football standpoint — though seeing him pull one more “Beast Quake” out of his skully would soothe many a football fan’s soul. It’s a run that inspired this YouTube cult classic. It would be great to also see him once again channel his inner Allen Iverson and eviscerate a linebacker’s ankles a la this treatment of Ray Lewis.

But Lynch’s voice is missed most.

Certain people speak volumes without saying much at all. That’s Lynch in a nutshell. His story has always been most accurately told via action. Boss. So it’s fascinating to ponder how Lynch would have chosen to participate in the Seahawks’ Week 1 arm-linking protest. Seattle has long been the most outspoken team in football, led by players such as defensive back Richard Sherman and defensive lineman Michael Bennett. But the backlash was swift and harsh.

Critics panned the Seahawks’ pregame demonstration on the 15th anniversary of Sept. 11 as cowardly and implied their action was a watered-down, #AllLivesMatter-approved version of activism. Others believed the teamwide display of unity railroaded Kaepernick’s original intentions. There’s no denying that the Seahawks’ decision was rooted in sincerity. But the reality is that the Seahawks’ unity protest did little, if anything, to advance the conversation. It’s wide receiver Doug Baldwin’s demands of all 50 attorneys general to review training policies for police and Sherman’s comments during training camp that resonated more. “It is unfortunate that kids have to deal with discrimination and things like that, that kids have to deal with underfunded schools just because their skin is a certain pigment,” Sherman said. And then there was Wednesday when the All-Pro cornerback walked out of a press conference.

Lynch, like his more vocal former teammate Sherman, is no stranger to ruffling feathers. And during his playing days, the media’s perception of him as a “thug” and “gangster,” following his run-ins with the law, never left his psyche. In 2013, Lynch told ESPN’s E:60, “I would like to see them grow up in project housing … being racially profiled growing up, sometimes not even having nothing to eat. Sometimes having to wear the same damn clothes to school for a whole week. And then all of a sudden, a big a– change in they life. Like they dream come true to the point where starting their career at 20 years old when they still don’t know s—. I would like to see some of the mistakes they would make.”

The inspiration behind Kaepernick’s charge stems from communities he believes are underserved and disproportionately discriminated against. Lynch is most at peace, most at home, most himself in Oakland, the launching pad of the Black Panthers and a city with a history of well-documented and tense race relations. His silence feigned ignorance to current issues, especially those affecting people who looked like him. Like his reaction to the not-guilty verdict for George Zimmerman in the Trayvon Martin murder case:

In an August 2010 interview, Lynch — similar to his Conan appearance this week — addressed fellow Oakland native Oscar Grant’s murder by a transit officer in 2009 in abbreviated, yet poignant fashion. “I ain’t feeling that, man. That was wrong,” he said. “They basically just gave that officer a free kill, man. Let him walk like that, man. And you want us to be proud around our community when we got BART police stabbing people, man?”

Lynch never cared to be the voice box or face of the franchise, though he long came off as the energy teammates rallied around. Had he suited up for one final campaign, Lynch could have very well have chosen to remain seated during the anthem, tossing back Skittles like sunflower seeds with his helmet on. Outside opinions never intimidated his decisions. If “The Town” had love for him, what else mattered? Just like he could have one-upped Kaepernick and remained in the tunnel until after the anthem. If he would have chosen to toss his name in the hat of history that Kaepernick, Brandon Marshall, Arian Foster and others have chosen to wear is a question forever left unanswered. Like why he didn’t get the ball on the two-yard line in the Super Bowl.

Lynch’s dosage of realism is an acquired taste. One best delivered over a bottle of Hennessy and a wood-tip, champed Black & Mild cigar. While he sits in the passenger seat blasting his cousin, rapper Mistah FAB. It’s not far-fetched to say Lynch, at some point, knew a Terence Crutcher, Korryn Gaines or Tawon Boyd. The game doesn’t change. Just the characters, the location and the time stamp. Similar to another West Coast legend, Lynch has always been true to the game. The test now is getting used to him doing so without a helmet and shoulder pads.