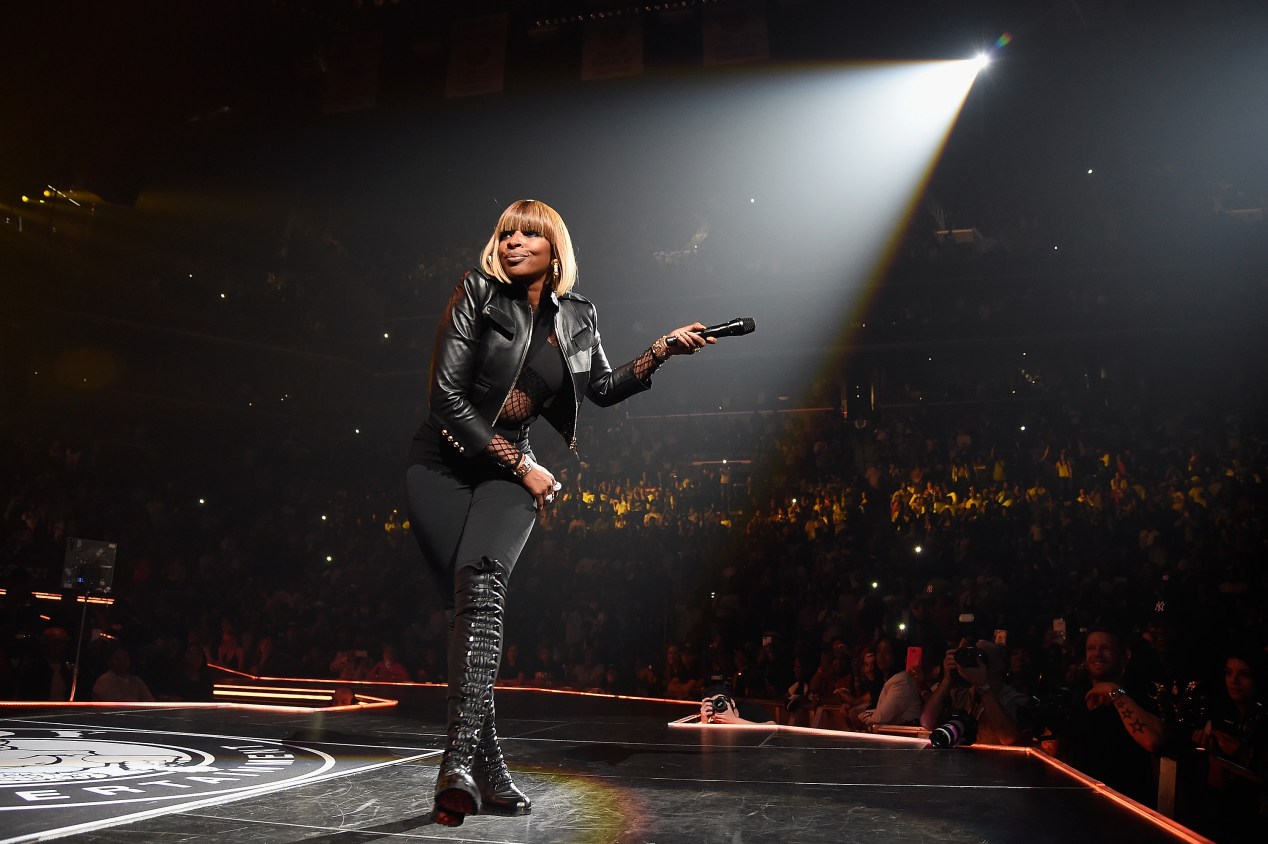 Mary J. Blige opens up about her message, her music and yes — her marriage

She takes a deep sigh.

Mary J. Blige is about to go there.

Blige believes her pain is purposeful. It’s a connection she’s shared with her fans for nearly 25 years — since 1992’s What’s The 411? Blige takes the rough patches of her love life, douses it with her signature Pentecostal preparation and bares the entirety of her soul on song after song with her husky mezzo-soprano range.

It works. Too well, in fact. We know more about the ins and outs of Blige’s romantic woes than perhaps we should. Generously, she’s shared them over the course of 12 studio albums — not including the more than 150 guest appearances on other artists’ songs. And Blige’s concerts feel like summertime revivals. The praise hands that move side to side at her shows during the ballads — the deep stuff, such as Not Gon’ Cry and Seven Days from her moody 1997 album Share My World and Your Child from her emotionally gripping 1999 album Mary — these are communal experiences among concertgoers. They mourn together with Mary their loves gone wrong and the seemingly eternal hunt to find that ever-after good-good.

It’s as if she takes the very personal pages of her supersecret diary and sets every nook and cranny to music. Blige gets us. She knows the strength of a woman. So when news hit that after 12 years of marriage, she was filing for divorce from Kendu Isaacs, the response — universally, perhaps selfishly — was “When is new music coming, and will it be the ‘old Mary’?” The Mary who conveys rich, layered emotion on a song in a way the music industry still hasn’t heard since Aretha Franklin. The Queen of Hip-Hop Soul knows what everyone thinks: The recent “Happy Mary” of the last decade, her music feels stagnant. “Hurt Mary” stirs souls.

The singer/songwriter is fine-tuning her new music now — it’s “coming soon,” she promises. And the forthcoming album will be exactly what her fans are hoping for: raw, unfiltered and the kind of lyrics that can make even the world’s most hardened soul sob uncontrollably. It’s therapy. For the fans. And, most certainly, for Blige herself.

But in the interim, not only did the Grammy-winning superstar interview Democratic presidential nominee Hillary Clinton for Apple, Blige has recorded a song, Strength of a Woman, to inspire WNBA teams as they enter the playoffs. Blige is about to take us all on a ride of female empowerment, self-love, how to get out when it doesn’t feel right and how to stay winning, in life and love.

Strength of a Woman — why does that song work so well for the WNBA?

It says it all. We are strong and we can do all things, and we’re great. When you look at these women who, in such a male-dominated world, a male-dominated sport — they’re doing amazing things. Their strength is amazing.

Sounds like you were about to say that female athletes, in some ways, are stronger than their male counterparts.

It’s remarkable because … we push babies into the world, you know what I mean? We go through labor pains, which I don’t think any man could ever fathom or even think about trying to endure. And when things are really, really rough, and it seems like all hope is gone, we push to the next level and run for president, [or] become a WNBA star. Look at me and everything I’ve been through in my life — and continue to go through. I rise above it, and I come out of it because I have that strength of a woman. It’s indescribable, but it’s so powerful.

Do you see a parallel between female athletes and female musicians?

“And when things are really, really rough, and it seems like all hope is gone, we push to the next level and run for president, [or] become a WNBA star.”

Women in particular have been listening to your music to garner that kind of strength. That’s a hell of a responsibility. Where do you pull strength from?

I pull my strength from the Creator, because seriously, mankind cannot give me anything. Human beings, they cannot restore me, they cannot strengthen me, they cannot uplift me. They cannot. So I have to put my faith and trust in God.

Of course … it [also] comes from me watching my mom when I was a kid, and her being strong and her keeping her integrity … Living in the conditions we were living in, her working three jobs and her never falling apart. I watched her, I’m sure she got her strength from a higher power. Because she went through hell.

Picking from your own catalog, what would be your arena entrance song if you were an athlete?

Oh, shoot! It would be Strength of a Woman. That’s where I am, that’s what I’ve earned. Like, I should be dead or insane from having the childhood I had to come through. Still, I’m making it good, still coming through it with dignity and class. That’s that strength that I have. Because I am a strong woman, I’ll be the strength of every woman, but I’m the strength of this woman, for me. I need strength for me.

This new song is only going to whet everyone’s appetite. People are ready for some new Mary music.

It’s coming really, really soon. We’re just wrapping it up and putting the finishing touches on it. And … it’s just truth.

It’s inspiration, it’s love, it’s happiness, it’s freedom. It’s everything that a woman needs in order to continue her journey, whether she’s a mother, a wife, or she’s not a mother, or she’s getting a divorce. Whatever it is she’s going through, wherever she might want to be … There’s something for the woman that’s starting her marriage, [and] there’s totally something for the woman that is like, ‘I’m done with this marriage.’

Where are you right now, musically?

There are two things that had to happen on this album. When I wrote it, I was writing from the perspective of a woman fighting for her marriage. And then I ended up, without knowing it, getting a divorce and understanding how it just came out of nowhere. So as I was in the studio … these are all the things that happened, so these are all the songs that … [will give] a full perspective.

How challenging is it for you to make yourself vulnerable like that to your fans?

You’re about to go out on tour with Maxwell. Why is now the right time for this tour?

Maxwell and I planned this … we have a radio show called Real Talk. It’s with Apple Music. And so on the radio show Maxwell was like, ‘So you know, we have to do the tour? We have to make this real.’ And so, me and him, we made it real. It’s just … I mean, I didn’t expect all this other stuff to happen around it, but we were already rolling and moving forward. You understand what I’m saying? It’s … it’s just the perfect time to do this.

“When I wrote [the new album], I was writing from the perspective of a woman fighting for her marriage. And then I ended up … getting a divorce … ”

You’re also going to be on TV this fall.

Are you looking to do more acting? And is there a particular goal that you’re aiming for in the acting world?

I’ve been bitten by the acting bug and it turns me all the way on. It’s something that I want to keep doing. I just completed a movie with director Dee Rees and the film is called Mudbound. It’s a pretty strong, serious part. What I want to do with acting is translate what I do with my singing career … which is get the roles that move me and move people, and help people. Acting is just another way of expression, another way of healing, to get things out. When I did The Wiz, I played Evillene, and that was very therapeutic to me. I needed to get that stuff out of me because there was so much there that nobody knew about.

What other acting jobs are you saying yes to?

Mostly right now, if I’m going to do anything, it will be dramas. It will be something heavy, because I need to get out all of this heaviness out that people don’t see that I’m dealing with. I need to get it out. I need to put it somewhere. I put it in my music, but I don’t like to completely weigh people down.

Even though “no more drama“ is affixed to the Mary J. Blige brand, you need drama right now to help you?

‘No more drama’ doesn’t mean that you’re not going to have drama, it basically says — it’s screaming — ‘no more!’ because drama is just showing up everywhere and you cannot get around it. It’s about learning how to get around the drama.