For Master P, there really were ‘No Limits’

This report was done in collaboration with FiveThirtyEight as part of a new video series called Contracts, which documents some of the amazing, weird and interesting contracts across sports.

Just why did Ricky Williams sign with a new sports agency headed by a rapper when he entered the 1998 NFL draft? The answer actually made quite a bit of sense back then.

Percy Miller — aka Master P — didn’t wear tailored suits or work on Wall Street. His rags-to-unfathomable-riches tale started with a $10,000 malpractice settlement he received after his grandfather’s death — and a Bay Area record store that sold everything. Literally everything.

His educational pedigree wasn’t the result of an Ivy League curriculum. Instead, two years of junior college classes and “hustling” were his bachelor’s, master’s and doctorate. Master P, straight out of both New Orleans’ Calliope Projects and Richmond, California, rocked shades, baggy clothes, a backward hat and, of course, a diamond-studded military tank chain. The jewelry was an appropriate symbol for this entrepreneurial dream, No Limit Records. In Master P’s solar system, music was the sun, the illuminating body that made him a star and around which his other hustles revolved.

No Limit was the blueprint for record labels in the post-Tupac Shakur and Biggie Smalls era. Featuring recording artists such as Mia X, TRU (the collective of Master P and his two brothers, Silkk The Shocker and C-Murder), Kane and Abel, Mystikal, Fiend, Soulja Slim, Magic, Snoop Dogg and countless others — the label’s reign preceded that of New Orleans musical megapower Cash Money Records. Cash Money, the kind of parent company of YMCMB, rose to national acclaim with similar in-house production and marathon release schedules by the end of the 1990s.

From 1992 to 1998, No Limit generated more than $120 million with very little radio play, and did it by catering to a dedicated legion of fans who, yes, supported great music, but also seemingly anything with a No Limit emblem. Between the years of 1995 and 2000, the label operated as its own musical factory, pumping out 61 albums. “Everything I did, I paid my time for,” Master P, then 28, told The New York Times in 1998. In rap, urban legends run rampant. Master P wasn’t above this approach, with stories of his life in the streets and even participating brute force with fellow MCs such as Pimp C. It’s all contributed to an image of a business to be awed by. “Me, I made a change. I left the thugs behind,” he said. “I don’t deal with them anymore. But I’ll tell you something: Once you’re from the street, you never get that out of your system. And it’s good to have street knowledge, because without it, I couldn’t have run my business as successfully as I’m running it now.”

Master P constantly evolved. The dream was to become the “ghetto Bill Gates.” Under his entrepreneurial umbrella was a real estate company, gas station, Foot Locker outlet, clothing line and even an adult entertainment hotline. Hollywood even wanted part of Master P’s hustle. In 1997, with $1 million of his own money, Master P wrote, produced, directed and starred in I’m ’Bout It. The independent film made $9 million, earning him a distribution deal with Miramax. A year later, the ’hood classics The Players Club and I Got The Hook Up were released — he appeared in and produced, respectively.

Williams, the Heisman Trophy-winning running back from the University of Texas — who graced the cover of Sports Illustrated with Hall of Fame running back Jim Brown — noticed all this. Even in 1998, Williams always marched to the beat of his own drum. No Limit Sports spoke that existence. Much like with Jay Z and Roc Nation Sports of today, the affiliation with one of the major rappers on the planet was both exotic and somewhat expected. Rap and sports had always courted one another. Master P took the flirtation to a full-time relationship, evident with clients such as Paul Pierce, Derek Anderson and Ron Mercer.

A collaboration with 538: Contracts

Master P was a kind of folk hero. And he hadn’t even turned 30. He was the next great mogul, following behind the likes of Puff Daddy and Suge Knight. Though his mantra never mimicked Puff Daddy’s crossover obsession or Suge Knight’s mafia fantasies, he knew how to, as the saying goes, make a dollar out of 15 cents — and an empire from a single brick.

Don’t call it a comeback, because Patrick Mahomes was always here Read now

Tyson Chandler: ‘Hell, no, I never could have envisioned being around this long’ Read now 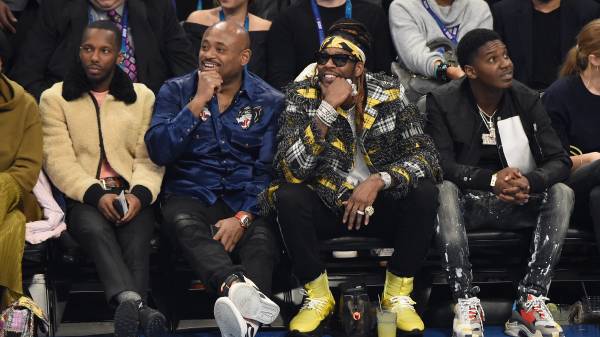 Whether via fate or destiny, Master P’s hometown squad, the New Orleans Saints, bet the house on Williams, trading all their draft picks in 1998 to select him fifth overall. Master P placed No Limit lead agent Leland Hardy in charge of the former Longhorn’s rookie contract. Williams confidently boasted that Hardy was “the best agent in the country.” Hardy, who didn’t respond to The Undefeated when asked for comment, was a former stockbroker and professional boxer who reportedly served as Muhammad Ali’s interpreter and sparring partner, a former business adviser to Venus and Serena Williams, and an actor. His IMDb page credits him as an extra in Spike Lee’s 1989 classic Do The Right Thing. He insisted on finalizing Williams’ contract at a country club because he wanted “to send a message to all the young kids down with No Limit: We invited ourselves to this society’s last bastion of exclusion.”

For Master P, Hardy and even Williams — the inspiration was there. The execution was anything but. Williams’ incentive-heavy contract, negotiated by Hardy, years later, became known as the worst contract in NFL history. Williams earned $3.8 million in his rookie season and would earn the minimum base salary every year. By comparison, the pick before him — Indianapolis Colts running back Edgerrin James — took home $14.8 million. Lack of experience in the field was ultimately No Limit Sports’ undoing. And the media backlash to the Williams contract was a black eye the agency never healed from. Not that it damaged Master P’s reputation much. A businessman is revered as much by his successes as he is the failures he doesn’t allow to define him.

Those are the rules of the game. Master P learned them back in Richmond, California. It became part of his spirit in the Calliope Projects. But despite Master P’s dream fizzling out, his ambition, his grind and his courage opened doors for others. Ask Jay Z. Ask Lil Wayne. Both have tossed their names into the sports agency arena. “You spread out because you never know when it’s going to end,” Master P said. ”Business is like a seesaw going up and down. When one goes down, I have the other one going up. You have to think like that if you want to survive.”