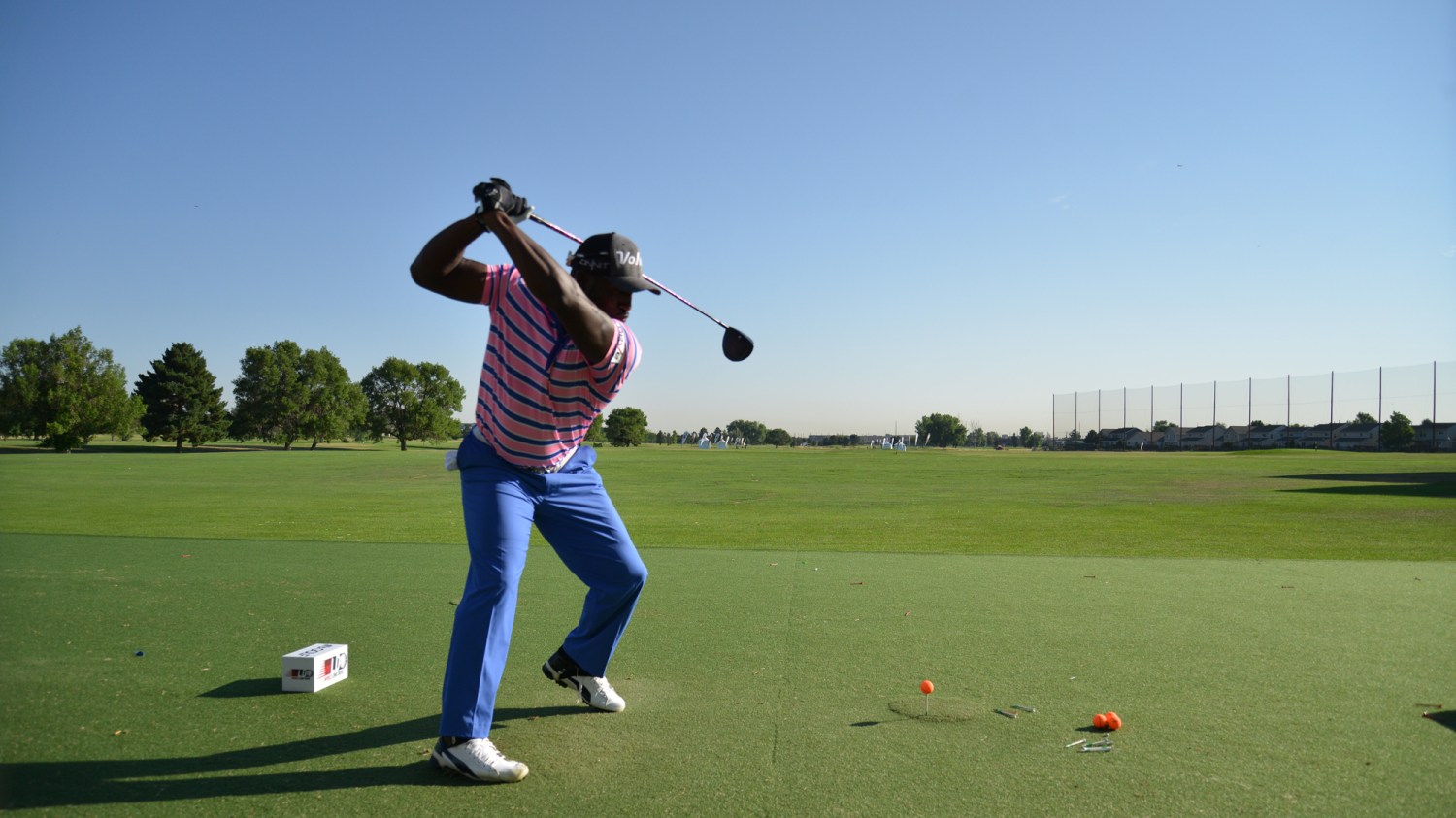 Whether dancing or screaming or pumping his fist, the top-ranked long driver is determined to be himself

Maurice Allen felt a bit tense as he lined up his tee shot in the July finals of the Mile High Showdown in Denver. Coming out of a television break, Allen was rushed to the tee and didn’t feel completely comfortable. It didn’t help that neither he nor his opponent in the final of the long drive competition, Ryan Reisbeck, had kept the ball in the grid for a legal score.

“I had to put myself in position to control the time,” Allen said. “I slowed myself down and said nothing else matters but this swing right here.”

The 5-foot-8 Allen unleashed a powerful swing, one he knew was special as soon as the club face made contact. As the ball ripped through Denver’s thin air, Allen raised his right hand to signal bon voyage, continuously flapping the fingers on his hand up and down.

Four hundred and thirty-six yards later, Allen – who had hit a 483-yard drive in an earlier round of the competition – was the champion.

“It was an incredible feeling,” said Allen, who won the men’s title alongside Troy Mullins on the women’s side. “It was an amazing moment.”

When the World Long Drive Championships begin this weekend in Thackerville, Oklahoma, Allen will be the player to watch. While Allen has never won a world title, he is the No. 1-ranked long driver in the world entering the competition, and the 36-year-old Florida A&M alum has introduced a colorful, hip-hop swagger to a sport that’s historically been unremarkable aside from the distance of drives.

When Allen connects this weekend, there’s a chance you’ll see him dance. And scream. And pump his fist.

“I see what people say online about me, and I know there’s a ton of pushback. But if I hit a ball 480 yards, you’re telling me I can’t yell and scream?

It’s a WWE/MMA approach that’s made for television and attracts a different type of fan. But Allen admits that the traditionalists in the competition might not embrace what he’s doing.

“I see what people say online about me, and I know there’s a ton of pushback,” Allen said. “But if I hit a ball 480 yards, you’re telling me I can’t yell and scream?

Introduced to golf as a kid by his dad, Allen said he had no interest in a sport that featured few faces of color. He played other sports growing up, eventually running track as a sprinter at Florida A&M.

Allen showed up one day at the school’s annual campuswide long drive tournament, which was run by Marvin Green, the school’s golf coach.

“I was like anybody else — the first time out I sucked,” Allen said. “I hit the ball, but I was all over the place. I had no clue where it was going or how to control it.”

His balls may not have been straight, but they went far. And that caught the eye of Green, especially after he saw what Allen did after he was handed a 7-iron.

“He hit it 220 yards, and I’m watching in shock,” Green remembered. “That was as far as a lot of people were hitting their drives. For a muscular guy who was running track and just came out there for something to do, I was impressed.”

Rey Robinson, the track coach at FAMU at the time, always knew Allen was versatile in his ability.

“He was always a good all-around athlete, had a little speed and even tried to pole-vault, and a couple of times he threw the javelin,” Robinson said. “But golf? That’s surprising. But my hat goes off to Maurice. I’m glad he’s bringing some recognition to the school.”

Allen decided in 2014 to focus full time on long drive golf and began one of the most difficult stretches of his life. He said he quit his consulting job and put his furnishings in storage to fund his endeavor.

He claims he was homeless for three months. Allen said some nights he’d call friends and crash on their couches. Other nights he’d sleep in his car, a BMW 645, and would shower at the golf courses where he was practicing.

“People would tell me to just sell my car, but I wasn’t going to do that — that’s just making a solution to a temporary situation,” Allen said. “I could have gone to my parents for help. But that’s not what I was trying to do. I felt that I could figure it all out.”

In Allen’s mind, struggling to pursue a career that offered him the ability to display his exuberant personality while being outdoors outweighed the monotony of being behind the desk at a 9-to-5 each day. If Allen had to occasionally sleep on a friend’s sofa that reeked of dog urine, which he claims he did, it was worth the inconvenience.

In 2015, Allen experienced a breakout year. He began the Long Drivers European Tour by winning the first event in Sweden with a drive of 379 yards in the championship round. The rest of the summer in Europe was incredibly successful: second place in Estonia (May) and Slovenia (June), first place in Belgium (July), third place in Holland (July) and first in Italy (August).

After losing in the second round in Spain in September, Allen was third in the season-ending Masters LDET Cup in November.

“That was a great year for me, considering there’s no domination in this sport,” Allen said. “This is a difficult sport because you can never predict what’s going to happen when the ball comes off the club face. Success in this is often based on what happens on the bounce and roll.”

In 2016 he had four more first-place finishes in Europe on the way to winning the European Tour Championship. Even with his current top world ranking and three highly successful years of long drive competitions behind him, Allen doesn’t believe he’s the favorite going into this weekend’s competition.

It’s obvious that Allen can hit the ball a ton. But if you remember the movie Happy Gilmore, you realize that won’t get you through a successful 18 rounds.

Allen said he has a .7 handicap and that he has a desire to one day compete in long drive competitions and play on the professional tour. That would follow in the footsteps of Jamie Sadlowski, the World Long Drive champion in 2008 and 2009 who left that competition last year to focus on professional golf. Sadlowski won a local U.S. Open qualifier last year by shooting 9-under-par 56, and earlier this year he made his PGA Tour debut.

“I really respect the fact that Jamie retired to play professional golf,” Allen said. “I want to be the guy who does both at the same time.”

Even though he plays with a style that might not be embraced by the golf masses, Allen said his approach will remain the same.

“One thing I’ve learned is you have to be you, because you can’t be anybody else,” Allen said. “In other sports, there’s no problem acting like Ric Flair or Prime Time [Deion Sanders]. You can’t make everybody happy. I’m going to go out, and I’m going to have fun.”