MEAC at 50: Who are the top football players from each decade?

From Harry Carson in the 1970s to Tarik Cohen in the 2010s, we pick the best offensive and defensive players

To commemorate what was supposed to be the 50th season of the Mid-Eastern Athletic Conference (MEAC), the league, back in November, released a list of the 50 greatest football players.

Unfortunately, that 50th campaign will be delayed at least a year as the MEAC canceled the spring 2021 football season last week due to COVID-19 concerns. The football season had been scheduled to begin on Feb. 20.

Though the season was canceled, The Undefeated is still moving forward with its list of top players — one on offense, one on defense — from each decade since the MEAC launched in 1971.

As is the case with any list, the MEAC’s 50 greatest players collection released in November didn’t please everybody.

This Top 50 is a Joke without Me!! I hope this was a misprint, and someone didnt proof read, shame on you!@ShannonSharpe @espn @HBCUGameday @TheUndefeated @NCAA_FCS

So we expect some heat in our attempt – with some consultation from a few of our friends who have followed the conference – to name the top offensive and defensive players from each of the last five decades. Our list is based solely on collegiate accomplishments. 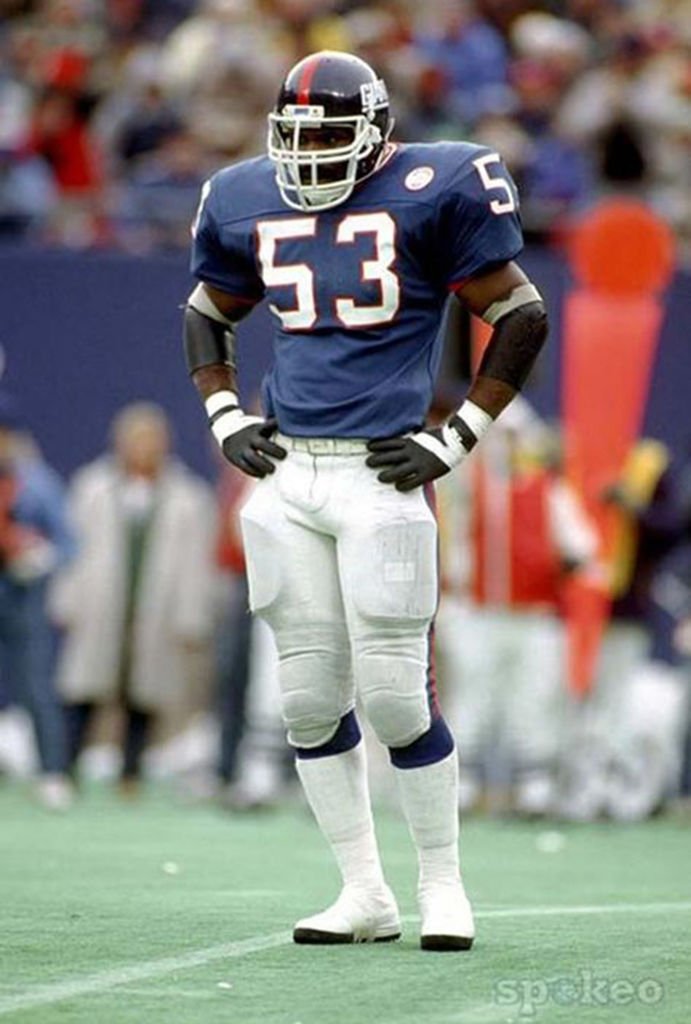 College impact: When Carson suited up for the South Carolina State Bulldogs in 1972, he was the first in a long list of talented players to have their careers shaped by legendary coach Willie Jeffries (Robert Porcher, Orlando Brown and Carson’s teammate, Hall of Famer Donnie Shell, among the others). Carson didn’t miss a game in four years, recording his best season as a senior when he established school records in tackles (117) and sacks (17) while being captain of a defense that recorded five shutouts and held its 10 opponents to a total of 29 points.

Postcollege career: Following his standout career at South Carolina State, Carson played 13 seasons in the NFL. He earned nine trips to the Pro Bowl, was twice named first-team All-Pro and won one Super Bowl. Carson was inducted into the Pro Football Hall of Fame in 2006. 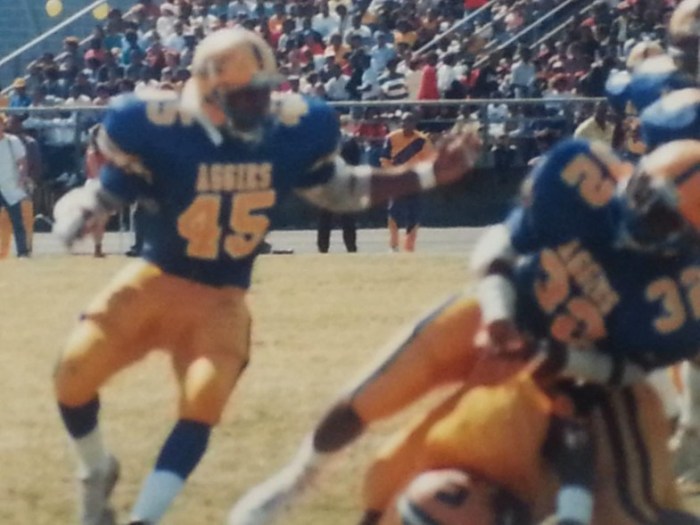 College impact: Harrison led the MEAC in tackles all four seasons with the Aggies. He still holds the school record for career tackles (497), which also ranks second all time in the MEAC. Harrison’s first conference player of the year award in 1988 was the same season he led the MEAC in tackles and was an Associated Press first-team All-American. Harrison had a league-leading 155 tackles as a senior. 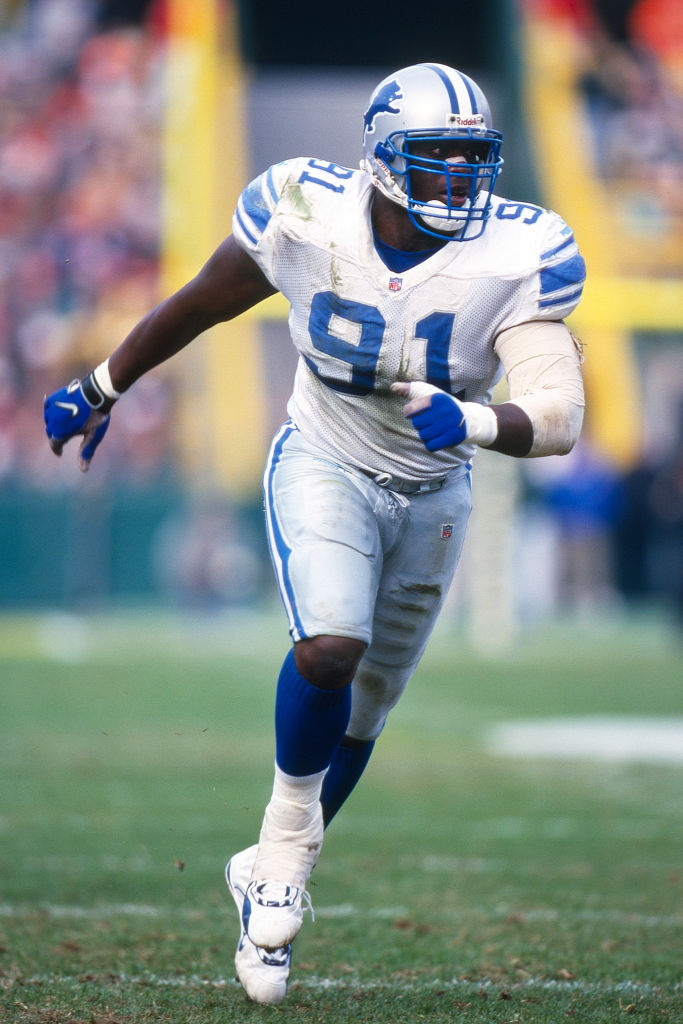 College impact: Porcher launched his college career at Tennessee State before transferring to South Carolina State, where he blossomed under the guidance of the legendary Jeffries. At 6-foot-3 and 275 pounds, he dominated his senior season with his sheer strength. “Robert literally made one tackle from Florida A&M cry during a game because he couldn’t block him,” Jeffries told The Post and Courier newspaper. That dominant senior season (he had 88 tackles, 24 tackles for loss and a league-leading 15 sacks) led the Bulldogs to the co-MEAC championship.

Postcollege career: Porcher was selected in the first round of the 1992 draft by the Detroit Lions. During his 13-year career (all in Detroit), Porcher played in three Pro Bowls, was a three-time All-Pro and was named first-team All-NFC. 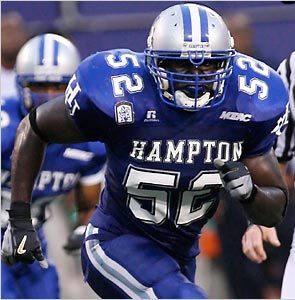 College impact: By the time Durant completed his final season at Hampton as one of the best defensive players in league history, he had led the school to one of its most impressive stretches in school history, as the team won three straight Black college national championships (2004, 2005, 2006). Durant finished his career with 339 tackles (third-most in school history) and recorded 176 solo tackles. While recording 98 tackles as a senior, Durant was the anchor of a Hampton defense that limited opponents to 14.5 points a game (sixth among Division I-AA schools). Durant’s three MEAC Defensive Player of the Year awards coincide with the three Black college national championships and three MEAC titles.

Postcollege career: Durant became the highest draft pick from Hampton when he was selected in the second round in 2007. He played 10 seasons in the NFL. 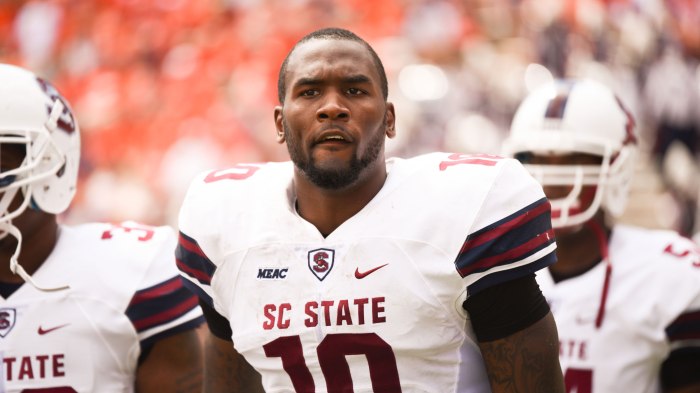 College impact: Leonard’s stamp on the South Carolina State program was immediate as he led the team in tackles as a freshman with 86 (14 for loss with five sacks and two forced fumbles). In winning his second MEAC Defensive Player of the Year award as a senior, Leonard averaged 7.3 solo tackles a game, which ranked second among FCS players. He left South Carolina State as the school’s all-time leader in tackles (393). Leonard played in the 2018 Senior Bowl and recorded a game-high 14 combined tackles in helping the North team to victory.

Postcollege career: The Indianapolis Colts picked Leonard in the second round of the 2018 NFL draft. Leonard has established himself as one of the league’s fiercest linebackers, leading the league in tackles in 2018 when he was named NFL Defensive Rookie of the Year. He’s been named NFL first-team All-Pro twice (2018, 2020) while earning two Pro Bowl selections.

College impact: A two-sport athlete at North Carolina A&T (he also played basketball), Turner emerged as one of the early top offensive stars in MEAC football. In his first year with the Aggies (1975), Turner passed for more than 1,300 yards while leading the Aggies to their first MEAC football title. That stellar play continued the following season as Turner became the first player in school history to pass for more than 2,000 yards while winning MEAC Offensive Player of the Year. Turner’s final season culminated with him playing in the Black College All-Star Game. He’s considered one of the greatest quarterbacks to play for the Aggies.

Postcollege career: Ellsworth played semipro for the Carolina Chargers/Storm, a North Carolina-based team that played in the American Football Association. 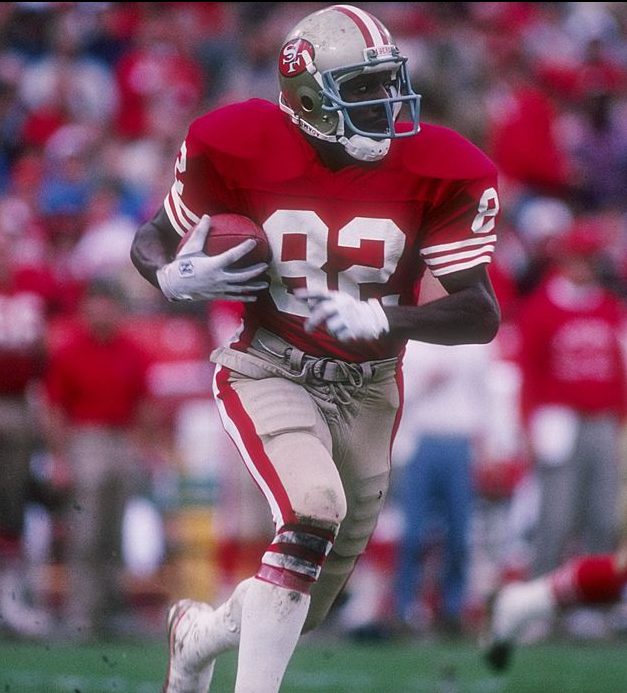 College impact: After being cut as a freshman at Johnson C. Smith University, Taylor transferred to Delaware State where he was guaranteed to make the team because of the school’s no-cut policy. Taylor scored 42 touchdowns, with 15 of those coming in his senior season. Taylor had 2,426 receiving yards for his career, and his 33 receiving touchdowns rank third all time in the MEAC.

College Impact: In a decade that produced Howard quarterback Ted White (MEAC records for career passing yards and total passing yards in a season, passing touchdowns for a career and a single game) and Florida A&M wide receiver Jacquay Nunnally (five MEAC records that include career receiving yards, career receptions and total receptions for a season), picking the best offensive player is tough. But Walker, while not in possession of as many MEAC records as White and Nunnally, was the player who was most impactful as he ran the Howard pro-style offense to perfection. He led the team to its only undefeated regular season and Black college national championship that culminated an incredible senior season. During that season, Walker, a transfer from Long Beach State, completed 223 of 406 passes and threw for 3,349 yards and 24 touchdowns in 1993 while earning the nickname “Sky Walker.” The 1993 Howard team earned a top-10 ranking and reached its only NCAA football playoff berth in school history (the Bison lost to Marshall in a first-round game of the Division I-AA playoffs).

Postcollege career: The New England Patriots drafted Walker in the seventh round in 1994. He played one season with the Patriots and two seasons with the Minnesota Vikings, playing in just one game and completing one pass. Walker currently is a football analyst on HBCU games for ESPN and is a member of the House of Delegates in Maryland. 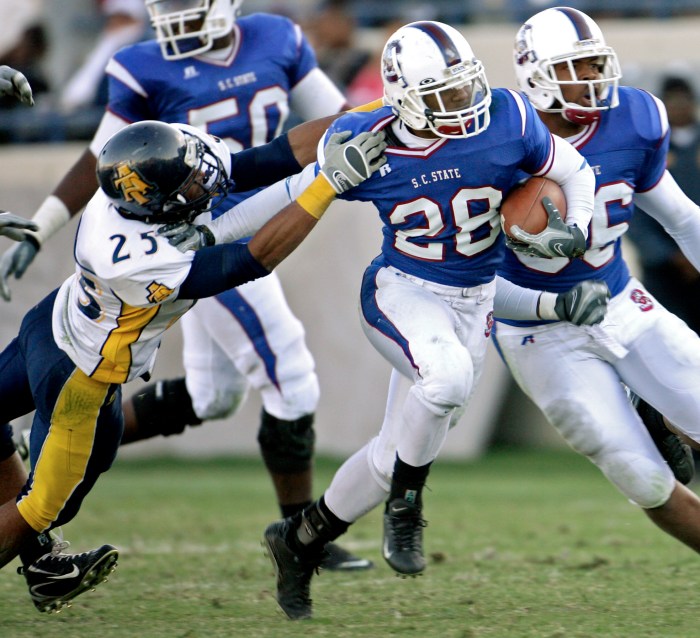 College impact: On the field, Ford was a blur, using his speed (he was a champion sprinter in high school) to rush for a then-MEAC career record 4,672 yards (now ranks second behind Tarik Cohen, who broke his record in 2016). Not only was Ford fast, he was also tough, with his ability to run by and through defenders. That allowed him, as a sophomore in 2007, to rush for a school single-game record 322 yards in a game against North Carolina A&T on the way to passing the 100-yard mark eight times that season. He only got better, averaging 115.3 rushing yards per game as a junior, and setting the MEAC career record for rushing yards as a senior.

Postcollege career: Ford played four seasons in the Canadian Football League, and was named a CFL East Division All-Star while playing with the Winnipeg Blue Bombers. 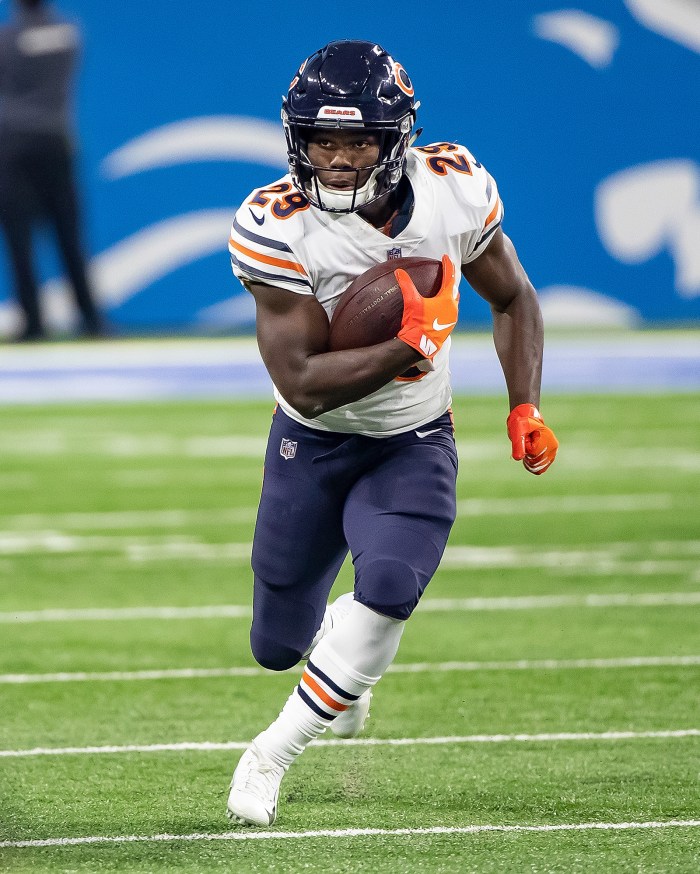 College impact: Cohen’s size (5 feet, 6 inches, 181 pounds) limited his scholarship offers to just one: North Carolina A&T. Injuries allowed him to break into the Aggies’ lineup in his first year, which ended with 1,148 rushing yards to become the school’s first freshman to break the 1,000-yard mark. Cohen won the first of three straight MEAC Offensive Player of the Year awards as a sophomore, and concluded his junior season with a career-best 295 yards in a Celebration Bowl win that helped the Aggies win the Black college national championship. As a senior, he rushed for more than 200 yards in three straight games, and ended his career as the MEAC’s all-time leader in yards gained (5,619). Cohen, who rushed for more than 1,000 yards in each of his four seasons, holds school records for rushing touchdowns (56), total touchdowns (59) and total points (339).

Postcollege career: Despite being the smallest running back at the 2017 NFL combine, Cohen was drafted by the Chicago Bears in the fourth round. He quickly developed as one of the most dangerous kick returners in the NFL, earning first-team All-Pro honors in 2018 as well as a spot on the Pro Bowl team.