MEAC/SWAC: Who to watch as conference basketball finals approach

This list of teams includes schools that make it to the semifinals and finals year after year and a few dark horses looking to shock.

Here’s a look at who’s playing whom, the history between the teams and a peek at the players making them go.

When the Florida A&M Rattlers faces the Bethune-Cookman Wildcats, it will be the first appearance the women’s team has made in the semifinals in five years. With a win over the top-seeded Wildcats, the Rattlers would be playing in their first MEAC finals game since 1999.

For that to happen, though, Florida A&M would have to beat the Wildcats for the first time this season — Bethune-Cookman, which only dropped one conference game the entire season, beat Florida A&M both times in the regular season.

The Wildcats enter the game after holding off a late-game comeback by Savannah State in a 53-43 victory. The Tigers scored 14 unanswered points, closing the gap to 45-41 before Bethune-Cookman eventually ended their rally.

Florida A&M, on the other hand, comes into the semifinals after storming back in its contest against Norfolk State. The Rattlers were down by 14, but ultimately overtook Norfolk State, 80-73, thanks to 16 points from Cedricka Sweeting and Victoria Nguyen.

Thanks in large part to four Hampton players scoring in double figures, the Pirates advanced on the other side of the women’s MEAC semifinals bracket.

NO. 1 north carolina central VS. NO. 5 MARYLAND eastern shore (Men)

This is the third time in the Division I era that North Carolina Central’s men’s basketball team has entered the semifinals round of the MEAC tournament. The Eagles are pursuing their second championship appearance.

In comparison, Maryland-Eastern Shore comes into the semifinal contest after winning its second game in the MEAC tournament for the first time since the 1973-74 season, when the team gained a first-round bye and defeated Howard and Morgan State en route to the championship.

This time around, the team needed a win over North Carolina A&T in the opening round and a 68-66 stunner over Hampton to advance to this year’s semifinals.

Norfolk State, playing in its backyard in Norfolk, Virginia, where the tournament has been hosted since 2013, needed overtime to make it to the semifinals. South Carolina State played the Spartans tough in its Wednesday matchup, eventually losing, 93-88.

In the past seven years, Norfolk State has played in this round six times, and faces a Howard Bison team raging like a bull through all the fine china in the MEAC’s shop. The Bison beat sixth-seeded Coppin State, 79-73, on Monday and followed that upset with another one, toppling No. 3 seed Morgan State on Thursday, 68-65.

Howard is now 10-23 on the season, while Norfolk State comes into Friday’s game at 16-15. Norfolk State has only played Howard twice in the MEAC tourney, beating the Bison both times — 68-53 in 2011 in the first round and 71-61 in the quarterfinals the following season.

The Grambling State Lady Tigers face off against their in-state rival, the Southern University Jaguars, in the SWAC semifinals on Friday.

The teams split their two meetings in the regular season. The Jaguars were victors on Jan. 7, when they walked out of Grambling State with a 71-86 win, and dropped a home game against the Tigers, 70-63.

Southern moved into the semis with a 73-66 win over Arkansas-Pine Bluff in the opening round. The Tigers joined them with a 71-61 defeat of Mississippi Valley State.

With its win over Prairie View A&M in the quarterfinals, Texas Southern accomplished a feat it had never done before in the SWAC tournament. Since the NCAA started its sponsorship of women’s basketball in 1981, Texas Southern had never beaten Prairie View A&M. Admittedly, the teams had only played a handful of times, with the Panthers winning those games in 2013 and 2014.

Alabama State and Texas Southern will be playing one another for the third time this season, with the Tigers having beaten the Hornets on both occasions. This certainly doesn’t discourage Alabama State, since the team only lost by a combined nine points in those two matches.

Texas Southern seeks to avenge its 77-70 home loss to Grambling in the regular season. The Tigers are coming into Friday’s game after an upset of fourth-seeded Prairie View A&M, 81-77. 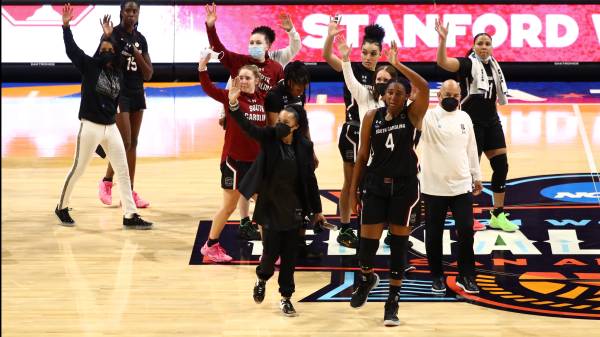 Dawn Staley diary: ‘This season, it wasn’t meant to be’ Read now

Trae Jefferson had a career night against Alabama State, scoring 28 points, while teammate Marvin Jones went a perfect 5-of-5 from the field and brought down 10 rebounds.

Alcorn State hopes it can advance to the championship game with a third win over Southern this season. In the team’s first meeting, the Braves won, 74-64, on Jan. 28, and again on Feb. 25 on the road, 68-67.

A.J. Mosby had 12 points the first time around and then had a 19-point effort in the second, while teammate Reginald Johnson scored in double figures in both games — 20 and 11, respectively.

Southern’s Shawn Prudhomme is the player to keep an eye on after scoring 16 and 25 in the two games.