Miami Heat forward Precious Achiuwa: ‘It’s big for me to have ‘Nigeria’ on my jersey’

Nigeria’s Olympic men’s basketball team made headlines when it upset Team USA in an exhibition game on July 10. While the majority of the players on Nigeria’s roster are American-born or immigrated to the United States as young children, there is one major exception: Miami Heat forward Precious Achiuwa.

“It’s big for me to have ‘Nigeria’ on my jersey,” Achiuwa, 21, recently told The Undefeated. “I’m the only NBA player on this team that was actually not only born in Nigeria, but grew up in Nigeria.”

Precious Ezinna Achiuwa was born in Port Harcourt, Nigeria, to Donatu and Eunice Achiuwa, who are both of Igbo descent. He has fond memories growing up in Port Harcourt, which is the capital of Rivers State and located in the southern portion of Nigeria.

“A lot of ships come in. It’s a port, so a lot of things come in and you’re able to meet people from different countries,” Achiuwa said. “It’s really, really diverse.”

Achiuwa grew up with three brothers, named God’sgift, Promise and God’swill, and two sisters, Grace and Peace. God’sgift Achiuwa told ESPN.com in 2011 that their parents, who were both Christian ministers, gave them those names because “all the names are found in the Bible.” Achiuwa credits his parents for teaching him about the importance of helping the less fortunate.

“My dad worked with a lot of kids who really didn’t have a lot,” Achiuwa said. “One of the things I really enjoyed doing a lot, was giving back to those kids, taking care of them, just making sure that they had clothes on their back, food on their table.”

As Achiuwa got older, it was his big brother God’sgift who inspired him to take basketball seriously.

God’sgift Achiuwa began playing basketball in his early teens and was discovered at a hoops camp in Nigeria in 2008 by then-Erie Community College (New York) coach Alex Nwora. The 6-foot-8 forward left Nigeria to start his college basketball career at the juco in 2009 and went on to become a defensive specialist for St. John’s during the 2011-12 and 2013-14 seasons.

Achiuwa, whose first love was soccer, dunked for the first time in the seventh grade at 5-foot-11 and said he learned the game by watching instructional basketball DVDs that worked on fundamentals.

“It was a long time ago, but I watched those tapes over and over and over again. For me, I just wanted to get better. I loved the game so much. I just kept practicing since then.”

Achiuwa followed his brother to the United States when he was 14 and in the eighth grade. It wasn’t easy to leave Nigeria, but his brother’s basketball road map and support made the process simpler.

“I’m the baby and my parents were back home. It was difficult to move away from home. But they let me go at such a young age,” Achiuwa said. “I remember my parents dropping me off at the airport. I was with my whole family at the airport, and then I got on the plane by myself. It was crazy.” 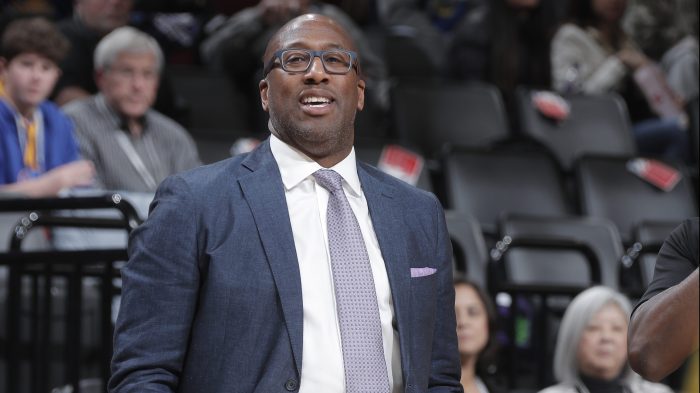 Achiuwa played high school ball at St. Benedict’s Prep in New Jersey and renowned Montverde Academy in Florida. He led the 2019 McDonald’s All American Game in scoring with 22 points and went on to play at the University of Memphis, where he was named the 2020 American Athletic Conference Player of the Year after averaging 15.8 points, 10.8 rebounds and 1.9 blocks as a freshman during the pandemic-shortened season. The Heat, God’sgift Achiuwa’s favorite team, drafted Achiuwa with the 20th overall pick in the 2020 NBA draft.

During his rookie season with the Heat, Achiuwa averaged 5.0 points and 3.4 rebounds in 61 games. He also accepted Nigeria’s men’s basketball coach Mike Brown’s invitation to join the Olympic team along with Heat teammates Gabe Vincent and KZ Okpala.

“Mike Brown was telling me about the team, the structure he’d put together,” Achiuwa said. “The guys he was expecting to be on the roster when it came to practice. The whole, everything about the team, and back then, we were talking, then COVID happened and we kind of like got shut down. Then this year, picked back up.”

Team Nigeria arrives in Tokyo with a roster that includes current and former NBA players Achiuwa, Vincent, Okpala, Michael Gbinije, Chimezie Metu, Jordan Nwora, Josh Okogie, Miye Oni, Ekpe Udoh and Jahlil Okafor. No African team has ever advanced past the preliminary round of the Olympics, but there is hope that the D’Tigers can make Olympic history. After defeating the USA and Argentina in exhibition play, Nigeria arrives at the Olympics ranked fourth in the world.

Achiuwa averaged 7.3 points and 6.3 rebounds in three exhibition games for Nigeria. His block of Kevin Durant’s dunk attempt during Nigeria’s upset of Team USA created a lot of buzz. And he put up his best performance against Argentina with 12 points, seven rebounds and three assists.

Brown expects Achiuwa to have an important defensive-minded role for Nigeria, primarily as a starter.

“He’s a unique talent from the standpoint that he’s a gifted, skilled player,” Brown told The Undefeated. “He can handle the ball, he can pass the ball and he’s got great size. But because of his quickness, his strength, his athleticism and his feel, and then he can be a $200 million player by playing the 5 because he can guard 1 through 5, and especially in today’s NBA game.

“But we need him to be a vertical threat for us at the rim and somebody that changes the game from that center position by sprinting in the ball screens and slipping out, creating paint touches from his dives off of pick-and-rolls, or off of screens off the ball. And if he’s open at the rim, throw it up and let him go get it. But the unique part about him is he’s so strong that if he gets hit or bumped while he’s still in the air, it’s not going to knock him off balance.”

While preparing for the Olympics, Brown has tried to find time to get to know each of his players. He said he has learned a lot about Achiuwa’s Nigerian pride during their conversations.

“He was just so excited about what we had accomplished in the first two games out in Vegas, not only for our team, but for everybody that he knows back in Nigeria,” Brown said. “He still has a lot of family and friends over there, and so the type of love that he’s getting is off the charts. And in his mind, that is probably a little bit more unique or different than everybody else’s [attachment] to Nigeria.”

Achiuwa planned to go back to Nigeria in 2020 before the pandemic, but is now uncertain when he will return. Even so, his family and all of Nigeria will be in his heart during the Olympics.