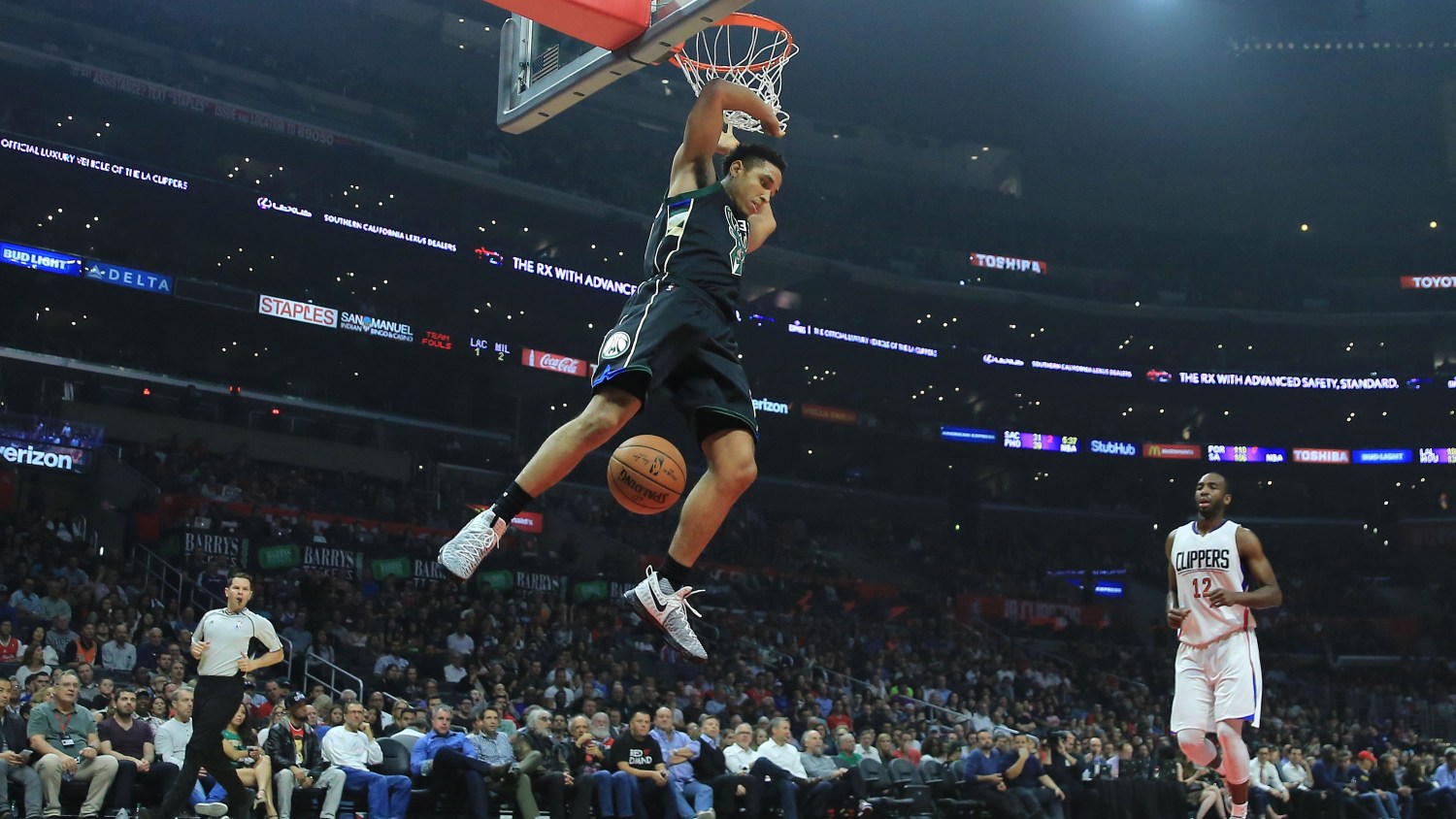 Malcolm Brogdon #13 of the Milwaukee Bucks hangs on the rim after a slam dunk as Luc Mbah a Moute #12 of the Los Angeles Clippers looks on during the first half of the NBA game at Staples Center on March 15, 2017 in Los Angeles, California. Victor Decolongon/Getty Images

The second-round draft pick would join the ranks of Stephen Curry, Larry Bird and more if he wins

Woody Sauldsberry, the 60th overall selection out of the historically black Texas Southern University in the 1957 NBA draft, is the only player in history outside of the first round to win the NBA Rookie of the Year award. Nearly 60 years later, Milwaukee Bucks rookie guard Malcolm Brogdon hopes to give the ex-Philadelphia Warriors big man some company.

“I’m blessed. Whether or not I win it, I’m blessed. My mom, all that she sacrificed driving me to all the AAU practices, my brothers supporting me and all my family that has helped get me here,” Brogdon told The Undefeated.

The 2017 NBA Rookie of the Year award will have one of the odder and more lackluster races in league history.

Philadelphia 76ers rookie forward Ben Simmons, No. 1 pick of the NBA draft, did not play this season due to injury. The leading rookie scorer is Sixers center Joel Embiid, the third overall pick in the 2014 draft, who was limited to 31 games in his first season of action due to injury. The active leading rookie scorer is Sixers forward Dario Saric, a first-round pick in 2014 who is averaging 12.4 points and 6.3 rebounds in his first NBA season.

Brogdon entered Tuesday’s game against the Portland Trail Blazers as the third-leading rookie scorer with 10 points per game while also ranking first among rookies in assists (4.1) and steals per game (1.15) and second in 3-point shooting percentage (40.8) and minutes per game (26.2).

Bucks coach Jason Kidd has been impressed by Brogdon’s playing ability, poise and poker-faced demeanor. When asked what argument the 1994 NBA co-Rookie of the Year would give for Brodgon winning the rookie honor, Kidd told The Undefeated: “That’s an easy argument. You’re talking about a second-round pick playing, starting and coming off the bench that is helping the team have success and win. At the end of the day, it’s about winning, but sometimes we’re judged on other things. I think he should be one of the top two, if not No. 1, if he doesn’t win it.”

Brogdon is one of the greatest basketball players in the University of Virginia’s history. The Atlanta native was the 2016 Atlantic Coast Conference Player of the Year and the ACC Defensive Player of the Year, becoming the first player in league history to earn both honors in the same season. The 6-foot-5, 215-pounder ranks ninth all-time in points scored at Virginia with 1,809. He averaged 18 points, 4.1 rebounds and 3.1 assists as a senior during the 2015-16 season and his No. 15 jersey was retired.

Several teams said Brogdon had strong pre-draft interviews in which he told them they would land a versatile winner who could play right away, owned a team focus, loved his family and had outstanding passions and life experiences.

“Our interview with him was off the charts,” Kidd said.

The knock on Brogdon? His age. He redshirted his second season at Virginia and graduated at age 23.

“That was definitely a big piece. It’s sort of the skewed way that the NBA judges talent,” Brogdon, 24, said.

Brogdon watched the draft last year in Atlanta with his family with hopes that he would be selected in the first round. The Bucks never worked out Brogdon before the draft, but selected him in the second round with the 36th overall pick. Two picks later were the Golden State Warriors, who had him listed as one of three prospects they were considering.

Brogdon’s agent, David Falk, told his client that the Bucks had every intention of him being on their roster during the 2016-17 season. Milwaukee showed its belief in Brogdon, signing him to a two-year deal paying $1.8 million with a team option paying $1.05 million during the 2018-19 season. He also has $50,000 in likely bonuses this season.

Brogdon eyed the Bucks as a team that could be a good fit for him before the draft.

“Everyone wants to go higher [in the draft],” Brogdon said. “But I’d definitely pick going to the right fit, which I did, than a higher number.”

“We were really lucky and excited that he was still there and we were able to get him,” Kidd said.

Brogdon has more than lived up to his rookie minimum salary this season as he is on pace to rank among the top rookies in most statistical categories.

Brogdon is on pace to join Larry Bird, Stephen Curry and Deron Williams as the only NBA rookies to average more than 40 percent shooting from 3-point range. Brogdon became the first rookie in Bucks history to record a triple-double with 15 points, a career-high 12 assists and 11 rebounds against the Chicago Bulls on Dec. 31, 2016. He also set Bucks rookie records for points (517), assists (229), 3-point field goal percentage (41.4), steals (65) and minutes (1,406) before the NBA All-Star break. Brogdon also garnered notice by dunking on Cleveland Cavaliers All-Stars LeBron James and Kyrie Irving.

“He just knows how to play. That’s what you saw at Virginia,” said Golden State Warriors assistant general manager Travis Schlenk. “I’m surprised by the way he has shot 3s. I’m not surprised that he can go out there and succeed. He knows how to play and guard and all that stuff, but he’s shot the ball better than I thought he would.”

While Brogdon’s early success is an NBA surprise, it wasn’t a surprise for him due to his “hard work.”

“I’m a guy that works hard and believes in myself,” Brogdon said. “I have confidence in what I do. From day one I believed I could play at this level immediately, but you never know if you’re going to have the opportunity. I came to the right situation. They give me plenty of opportunity.

“It’s all my hard work. I believe I outwork everybody. To get to this point, I’ve overcome a lot of doubt and people that said I wasn’t good enough, athletic enough, all types of stuff.”

The well-rounded Brogdon’s amazing rise from second round to Rookie of the Year candidate is also good for his budding platform off the court.

Brogdon’s father, Mitchell, is a lawyer and mediator, and his mother, Jann Adams, is Morehouse College’s dean of science and math. He not only earned his bachelor’s degree at Virginia, but a master’s degree in public policy from the renowned Frank Batten School of Leadership and Public Policy. Brogdon and his family did not want him to leave school early for the NBA because they wanted him to complete his master’s at Virginia.

“My family is educational-based,” Brogdon said. “It was important to my mom and important to me, too. It was important for me to go back and get my master’s and not come out early, because we felt like the NBA would be there. Getting your master’s paid for and getting it free from UVA is writing your ticket when you’re done playing basketball. Basketball isn’t just the end for me, it’s the beginning.”

The well-traveled Brogdon is interested in creating a nongovernmental organization (NGO) to help alleviate poverty and hunger in developing nations. Given Brogdon’s nicknames — “The President” and “Humble Moses” — Bucks All-Star forward Giannis Antetokounmpo has said he can see the rookie becoming the commander in chief of the United States one day. First, Brogdon would love to play for Team World in the second NBA Africa Game on Aug. 5 in Johannesburg.

“People have said they see me in politics, but I’m not sure. For me, at the end of the day I want to help people and help alleviate poverty in Third World countries. That is really my dream, to go to Africa to do some work and be very active in a NGO.”

Said Kidd: “I liked the nickname ‘The Prez’ because maybe one day he is.”

Whether Brogdon becomes the NBA Rookie of the Year or not, his already motivational story appears to have lots of great chapters in store on and off the hardwood.