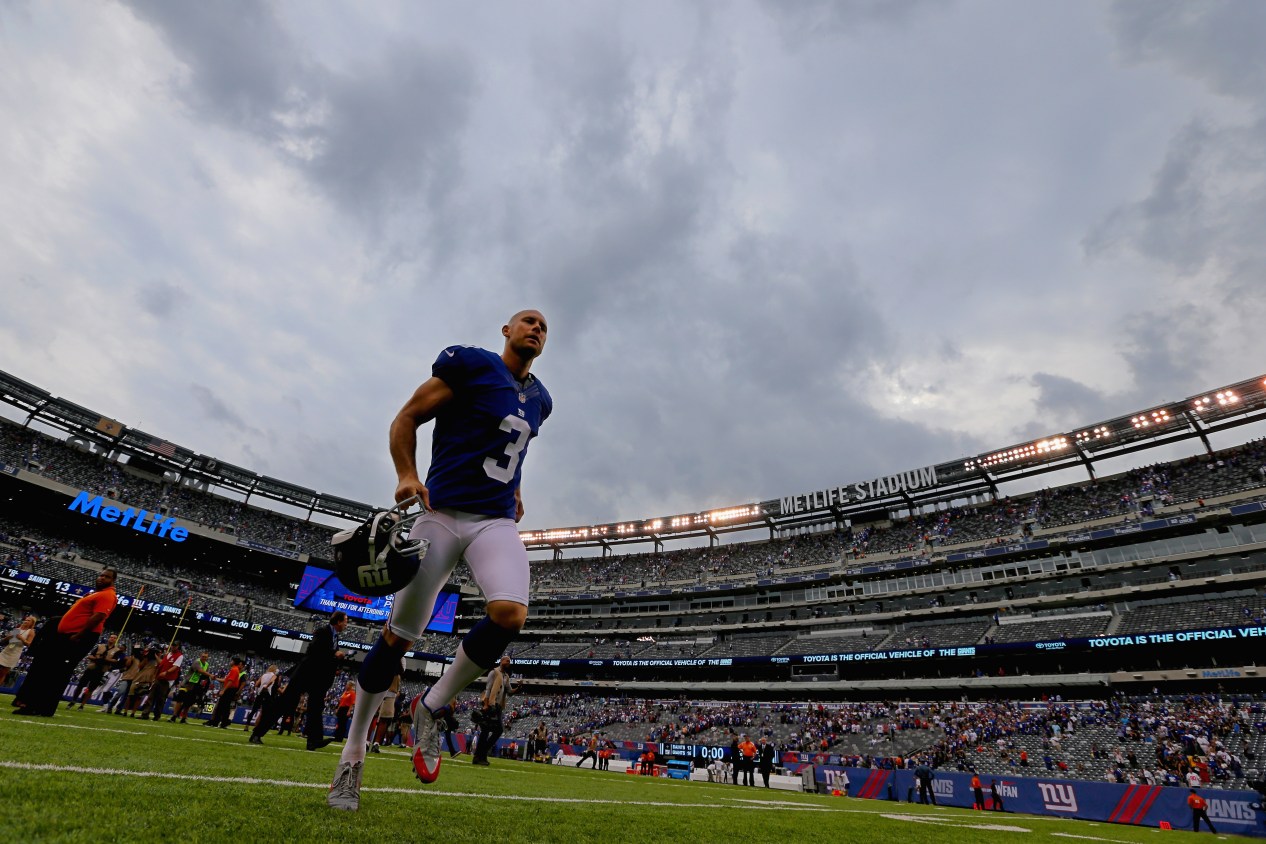 I can’t say that I haven’t derived some level of smug satisfaction from watching the league’s sacred Article 46 become the burden we warned them it would be, back in 2010. Article 46 is the portion of the collective bargaining agreement that the NFL uses to justify the commissioner’s seemingly unbounded authority when it comes to disciplining players for misconduct.

During negotiations, NFL Commissioner Roger Goodell and the league made it clear that Article 46 was a “deal-breaker.” But that didn’t stop us from arguing that it was not only unfair to players, but dangerous for the league. I remember describing to Goodell and the owners a hypothetical situation where it was clear that a suspension of a player was in everyone’s best interest, but the question was for how long. We explained how unfair and arbitrary it would be for the players and how fraught it would be for the league to be expected to levy punishments with incomplete information. The alternative we presented would have given the players certainty and Goodell and the league the cover they desperately needed to explain the length of suspensions. But, the siren song of absolute power was too seductive, guiding Goodell and the NFL into rocky shores.

Goodell is oft maligned for this era of commissioner overreach that, in the minds of some, starts with the decisions made in the Ray Rice case. But to be fair, by then it was too late. That node of the decision tree had no strong branches because of a series of nearsighted decisions that felt right at the time. Some made by Goodell, some made by me and other leaders at the National Football Players Association (NFLPA). We overreacted during a scary time and abandoned some of our core principles. It goes back much further than Josh Brown, Greg Hardy, or Rice. It actually starts with Ron Artest and Paul Tagliabue.

Article 46 is not new, but its application is. Before to the Goodell regime, Commissioner Tagliabue followed the words and spirit of Article 46, which calls for consultation with the NFLPA’s executive director. Before disciplining players, Tagliabue consulted with NFLPA executive director Gene Upshaw. And Tagliabue recognized the need for limitation on the NFL’s power and respect for the criminal justice system. As difficult as it may have been, Tagliabue allowed the criminal justice system to investigate and prosecute players accused of crimes before making a decision about league punishments.

Famously, in 2000, Tagliabue did not suspend Ray Lewis, who was charged with murder, because the charges were dropped after Lewis agreed to testify and plead guilty to a misdemeanor obstruction of justice charge. In a letter to Lewis’ lawyers, which the NFL made public in 2000, Tagliabue addressed criticism from the media that Lewis should have been suspended. Tagliabue said that since Lewis was wrongly charged with murder, he had already suffered significant harm to his reputation as well as financial damage. Therefore, a suspension was not warranted.

This came just a year after Carolina Panthers’ receiver Rae Carruth was convicted of conspiracy to commit murder. Undoubtedly these events created a blemish on the NFL, and had team owners somewhat concerned about the financial implications of becoming viewed as a league that enables criminals, a league with no morals. Sponsors will not pay billions of dollars to be associated with that image.

In 2004, the Malice at the Palace happened in the NBA. Players from the Indiana Pacers climbed into the stands to fight fans who had thrown things at them. From a marketability and image perspective, this was a catastrophe for the NBA, a league that had already become too cornrowed and tattooed for many fans and potential sponsors. This didn’t go unnoticed by the NFL.

In 2005, there was a sudden uptick in NFL player arrests. As a percentage, NFL player arrests were still well below the national average for men in that age range, but that didn’t matter. All that mattered was perception. And the perception of the NFL was waning. And Adam “Pacman” Jones became the face of NFL criminality and waning perception. In a three-year period, he was charged with five crimes. Many of the charges were dropped. His team, the Tennessee Titans, suspended him for one game, but no suspension was issued from league office.

At the NFL combine in 2007, Goodell created the Commissioner’s Player Advisory Council. He invited me and a few other player leaders to this group. It was said that the group was to be a way to make sure that the players’ voices were being heard. That group only met a few times. Frustrated by the diminished reputation of players and showing a lack of foresight, we agreed that “something” needed to be done about “Pacman” and players like him. In April, without a conviction, Goodell suspended “Pacman” for a year. Without explicitly approving the suspension before it was announced, we validated the commissioner’s unprecedented action by not challenging it.

That was the day Article 46 was rewritten without changing a word.

Next, Goodell introduced a new tougher personal conduct policy. He said “It is not enough to simply avoid being found guilty of a crime. Instead, as an employee of the NFL or a member club, you are held to a higher standard and expected to conduct yourself in a way that is responsible, promotes the values upon which the league is based, and is lawful.” Then came an eight-game suspension of Chris Henry after he was arrested four times in 14 months and facing charges as serious as aggravated assault with a firearm. And Goodell suspended Tank Johnson, who was serving a jail sentence for issues related to a gun possession charge.

There has been no turning back since. Article 46 even began to be misapplied to entire teams with Bounty-gate in New Orleans and Deflategate in New England. All of these were actions taken to, as Goodall is fond of saying, “protect the shield.”

As much as I’d prefer to blame Goodell, other players and I are partially responsible. Days after the suspensions, in response to the new personal conduct policy, Bengals receiver T. J. Houshmandzadeh said, “You would think it’s necessary just because of the negative publicity the NFL is beginning to receive because of what’s happening. It was going on for an extended period of time. Each day, each week, something was happening.”

Bengals quarterback Carson Palmer said, “I think it will [help]. With all of the things that have been happening recently, I think it will be good and hopefully give the league a little better image. I hope that it works and that guys abide by the rules and do what’s right.”

Even Upshaw lent support, saying, “We believe that these are steps that the commissioner needs to take and we support the policy. It is important that players in violation of the policy will have the opportunity and the support to change their conduct and earn their way back.”

This proved to be a tragic misstep that has led to the flawed current state of commissioner discipline. I wish I could go back and affect how things have evolved.

I think the current state of commissioner discipline and the legal decisions that maintain its legitimacy are tragic, but that’s coming from my admittedly biased vantage point as a former player. But, if I suspend my biases and imagine how I would assess the application of Article 46, from Goodell’s perspective I would believe that I successfully managed a challenging set of circumstances. I would accept that some of the recent decisions, starting with Rice and ending with Brown, have not been well-received. I would even accept that I could have done things better, but I would feel, without a doubt that my job has been done. I would feel that I have more than earned my hefty salary. I have sacrificed myself to effectively protect the shield, the brand. A brand that was facing an image crisis became more deeply ingrained in the fabric of American culture and converted that crisis into revenue growth in the billions of dollars. It is hard to argue with those results.

However, no matter which perspective I take, I know the goal of resolving the image crisis was not achieved by the NFL attempting to be investigator, judge and jury. The actions taken by the NFL to address the burgeoning image problem in the mid-2000s has yet to bear a long-term resolution. They have only managed to postpone and complicate the path toward a sustainable resolution.

In the past few years, the NFL’s image crisis has reappeared from its dormant state stronger than before and immune to Article 46. I am eager to see if the league will attempt to address it in a more permanent fashion or continue to defer resolution, adding another dimension to an already thorny predicament.