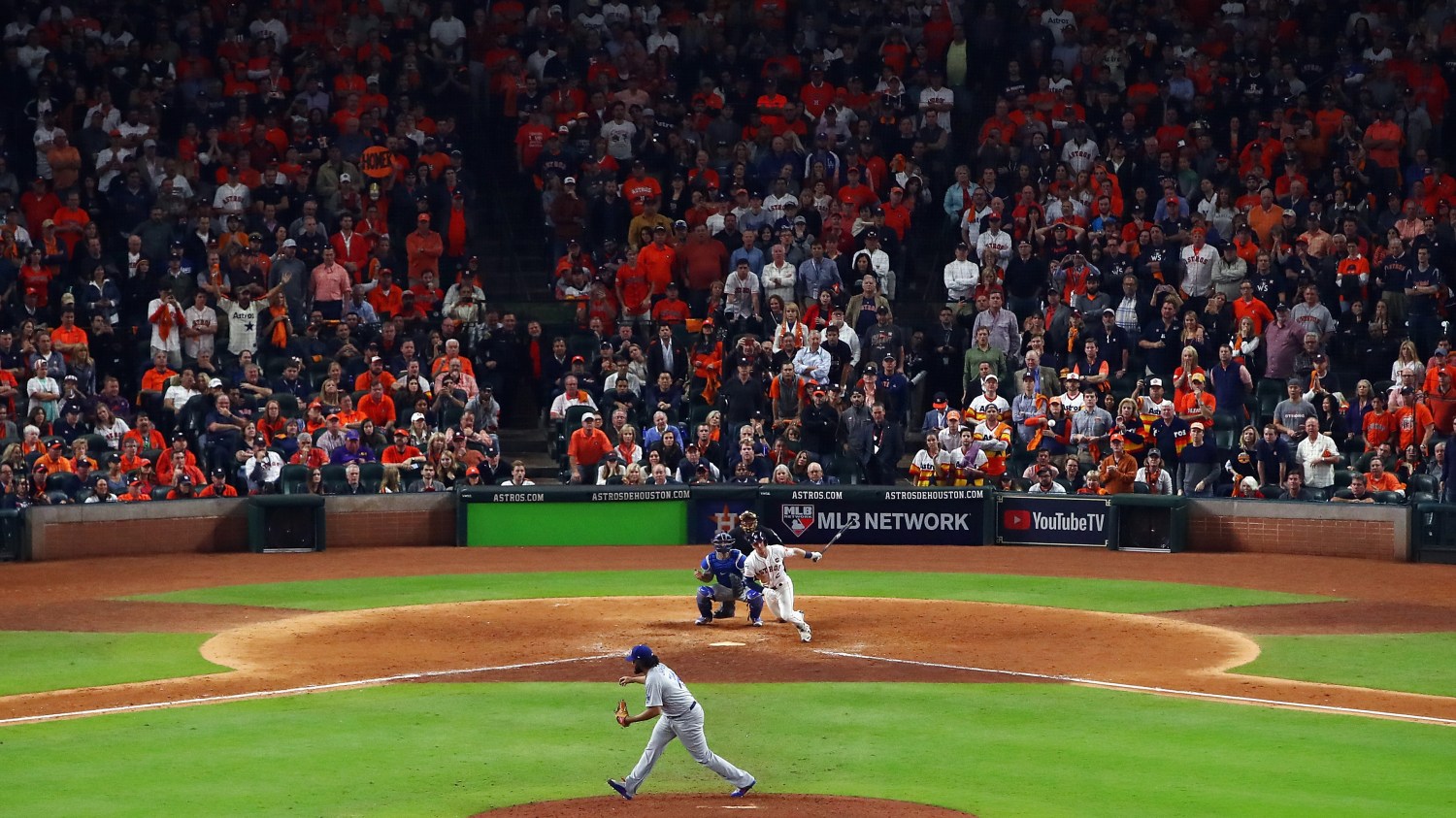 Alex Bregman #2 of the Houston Astros hits a game-winning single during the tenth inning against Kenley Jansen #74 of the Los Angeles Dodgers in game five of the 2017 World Series at Minute Maid Park on October 30, 2017 in Houston, Texas. Ezra Shaw/Getty Images

For the culture: Dodgers and Astros should embrace their cities’ personalities in World Series

If sports are a melting pot, why isn’t that reflected in all aspects of the stadium experience?

With Game 2 of the World Series between the Los Angeles Dodgers and Houston Astros tied 3-3 heading into the middle of the ninth inning, the Dodgers DJ finally picked a song representative of the situation and of the city where the game was being played.

After spending three days at Dodger Stadium for the pre-World Series media scrum, Game 1 and Game 2, I hadn’t heard much music that originated from the City of Angels.

I heard a lot of Top 40 music — don’t get me wrong, I like that mix — but that music can be played anywhere. In a region that produced the likes of Kendrick Lamar, Dom Kennedy, Dr. Dre, YG, Snoop Dogg, Ice Cube, Tupac Shakur and N.W.A. (artists representative of the city’s toughness, swagger and finesse), why did it take pitcher Kenley Jansen giving up a game-tying home run to the Astros’ Marwin Gonzalez on an 0-2 pitch to tap into that? Picking “Alright” by Lamar, who’s from Compton, California, after the team gave up its 3-1 lead was a smart and timely decision.

Outside of the home runs and scores the Dodgers put on the board, the loudest I heard the crowd in that stadium was when Jansen came out of the bullpen to Shakur’s “California Love” (or Kenleyfornia Love, as he calls it) and when the Dodgers fought back from a 5-3 deficit in the 10th inning and the DJ dropped Dr. Dre’s “Next Episode,” when Los Angeles tied it up, 5-5, going into the 11th. The Astros ended up winning 7-6.

Houston went with a heavy dose of country, rock and Top 40 hits to keep the crowd engaged in Games 3 and 4. Frankly, fans were the loudest when “God Bless America” was played — and the team followed with “Deep in the Heart of Texas.”

Otherwise, the music at Minute Maid Park was almost background noise. It didn’t excite often and certainly didn’t offend. It definitely didn’t get the people going, except for those two songs. Now, in an interesting plot twist, there was a section of fans near Torchy’s Tacos who absolutely loved DMX’s “Roughriders Anthem,” which George Springer had as his walk-up song. They loved it so much they went a cappella and sang it throughout Game 4.

If fans in Houston want to rap the lyrics from the region (New York) they just beat in the American League Championship Series, then go for it. I’m not going to lie and say I wasn’t disappointed that “Grillz,” featuring Paul Wall, couldn’t get some love, since Astros fan Wall offered to give the Astros customized grills (jewelry worn over teeth).

In baseball, much of the city’s musical culture is not about who shows up to represent but rather depends on the selections of its players, the composition of the fan base and the brilliance of the DJ in charge of the playlist. Cody Bellinger and Andrew Toles’ walk-up songs, for instance, are Lamar’s “Humble” and “DNA,” respectively.

The only time I heard music originating from Latin America from either DJ was when Latino players came up to bat. That’s pretty disappointing when you consider that Houston’s Latino population accounted for 35.3 percent of the city’s population in the 2010 census, just 4 percentage points less than white people (39.7), and Los Angeles County and California “have the largest Latino populations of any state or county in the nation,” according to a U.S. Census Bureau report released in 2015.

Just before the start of Game 2, Dodger Stadium played a public service announcement about being courteous to other fans, and the video included almost all Latino children. That was nice to see because in 2014, Latino people took over as California’s largest racial/ethnic group with 14.99 million people in the state. But it reinforced my questions about why I only heard music from the Latin genre when Yasiel Puig, Enrique Hernandez and Yasmani Grandal walked up instead of throughout the game.

No fewer than seven of the 13 position players on Houston’s World Series roster are of Latino heritage. You are bound to hear Latin music in the Astros’ clubhouse. Is it asking too much to blend in some of this music during a three-hour game?

Remember when PSY’s “Gangnam Style” took over Dodger Stadium in 2012? The Korean pop song didn’t just bring Korean people to their feet — fans of all types got in on the Dodger Stadium dance cam action. In that case, and when the Dodgers brought PSY to the stadium in 2013, it was an example of how easy it was to play music inclusive of a community or fan base.

One could argue that inside the ballpark the demographics are not nearly as representative of the overall cities themselves, and the music is being played for the crowd attending. Especially when you’re discussing who does and does not have the disposable income to attend a big four championship event and foot the $1,863 average ticket price.

Fans play a role in the music playlist, but the people playing, at least in the NBA and NFL, are the ones who set the tone with the listening selection. It may not seem like a big deal in the grand scheme of watching a game, but I’ve got to tell you, a good music set can keep fans hyped and locked in.

If both venues can take the time to create food inspired by cultural influences, a more time-consuming task, then is it too much to ask for the stadiums to play music that embodies these different communities on their rosters and in their fan bases? If sports are the melting pot they are billed to be, that should easily extend to music representative of the cities in which the teams play.