‘People are taking sides, and once you take sides it’s going to make everything worse’

Most children dream of making it really big in some form or fashion. They have aspirations of being the greatest. Total Nonstop Action Wrestling champion and Bellator mixed martial artist Bobby Lashley certainly grew up to fit that bill.

Known as “The Dominator,” Lashley (14-2) will attempt to win his eighth straight fight in his first MMA bout in 2016 at Bellator 162 at the FedEx Forum in Memphis, Tennessee, against Josh “The Juggernaut” Appelt (12-5) on Oct. 21.

Lashley graduated from Missouri Valley College in 1999, where he was a three-time National Association of Intercollegiate Athletics wrestling champion at 177 pounds. He then enlisted in the U.S. Army, where became a two-time Armed Forces wrestling champion, as well as earning a silver medal at the 2002 World Military Championships.

He signed a developmental contract with the WWE in 2004, made his professional wrestling debut in 2005 and made his pro MMA debut in December 2008.

Lashley spoke to The Undefeated about his life, racism, and police brutality.

Are you confident that you will be victorious at Bellator 162?

I hope so. That’s the plan. You never know what happens with two grown men out there, and two big guys going at 250-260 pounds. I’ve been training my butt off for this. I’m hoping to come out there really victorious and have a good showing. I have some good striking coaches. I’ve worked with some of the best of the best. I did a lot of boxing, a lot of sparring, and that’s helped me out a lot. One thing that I’ve been doing is getting a lot more sparring in, because that makes me feel more confident when I go out and actually fight.

Has your fighting style changed significantly from your first MMA battle until now?

My style before was take them down and just ground and pound them. Now I train a lot of stand-up. I will stand and bang with somebody and I feel more comfortable. If you’re comfortable, you’re dangerous. If you’re not comfortable, you panic. You run into problems. That’s the biggest thing that I’ve tried to overcome and I have overcome in the last fight, was just being comfortable.

You once spoke about the lack of realism in professional wrestling, will you please explain that?

I love professional wrestling, but we’re in the day and age of reality TV. I believe that we have to be based more on reality. Right now we’re veering away from that and we’re trying to say, ‘Oh, let’s just make this fun and then let’s get this person a title and let’s have fun with this. This guy is just a cool character that people like.’

Having a cool character is understandable, but right now we need to have a legitimate champion [in] wrestling. We’re still defending our business. We have this little [guy] Conor McGregor [a UFC fighter] a few weeks back come through and really just bash all of the wrestlers: ‘I’ll slap all of these guys in the mouth.’ I’m like, whoa, little guy, you can say that about some people, but some people you can’t.’ We need to have people that can defend our territory as professional wrestlers at the highest level, especially if you’re holding the title. Even if you can beat up everybody, at least you can’t beat up our champion.

What is your advice to young fans who want to enter the world of professional wrestling or MMA?

There’s so many people that should be fighting Eddie Alvarez for the title, but Conor McGregor gets to bypass everybody to go up there. [It’s] because he’s marketing himself and made himself a commodity. He made himself profitable for the system.

As an Army veteran and with family members who served in the military, what’s your position on the Colin Kaepernick protest?

Right now, it’s everybody getting divided into black and white, and different races and different religions. I think it’s just out of control right now. There’s so many good things that are happening in the world that we’re not paying attention to. I think right now we’re so focused on negativity.

Do you believe athletes have the right to speak out on social issues?

You can speak out on anything you want.

I try to stay away from a lot of those things, because I try to stay positive. I have my political views, I have my social views and everything like that based on what I know. I feel that if I need to speak on something, then I will, but if I don’t, my view is my view. I’m not trying to sway your opinion.

I think that too many people are sheep out there and they just follow instead of making up their mind [for] themselves. That’s one of the reasons why I don’t have TV, because I’m not just going to let somebody else brainwash me and tell me what to think and what to feel.

Have you ever experienced police brutality, racial profiling and racism?

I’ve had those [experiences] several different times. For me, I had someone that was just nasty, [but] I’m not going to tell my son to be scared of the police. No. They are there to do their job.

I’ve had racism thrown in my face so many different times, especially in the sports entertainment world that I’ve been in. I slipped away for a lot of those reasons, but what I do … I’m not sitting here bashing and fighting, I just feel like if there’s a wall standing in front of me, I move to the side and I keep going.

How will you discuss the issues with police with your children, especially your son?

My son is 8 years old. I hope that I don’t have to have that with him now and there are little things we talk about and he understands it. I try not to throw that in his face so much, because I don’t want him to take a militant view either way.

I can’t sit there and tell my son, ‘Oh, no, the cops will get you or you’re going to be in risk of him shooting and killing you.’ I can’t tell them that.

I can tell him, ‘Hey, if the cops pull you over, just be compliant with what they ask. If they’re rude to you, if they’re nasty to you, just bite your tongue for the time being and move on.

‘If it’s too ugly, what you have to do is bite your tongue, move on, and then go about the right channels, but don’t try to solve the problem then.’

Don’t try to fight back and don’t try to do anything like that at the time. I know some of these people that are going through it and getting beat up and it’s an unfortunate situation and outcome. Sometimes, some of those people are cowards. They’re going to use it to their benefit and it’s just not going to be good.

With all that’s going on in the country right now, what are your thoughts on the police and the black community? 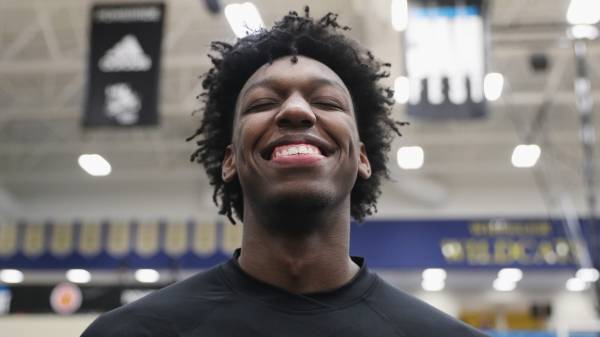 People are taking sides, and once you take sides, it’s going to make everything worse. You have to understand, because I think right now … I have some friends that are police … Back and forth, black and the white. They’re going out there and they’re almost terrified right now. They’re terrified to do their job.

Everybody’s on guard right now, because we’re putting too much into this issue. The police are like, I’m going to shoot first because I don’t know if this person is going to come and get me afterwards. So they’re on guard and then the people that are getting pulled over, they’re on guard. Everybody is living in fear. I think right now what we’re doing is we’re teaching ourselves and putting ourselves in the level of fear.

Sharon Brown is a basketball writer and founding editor of All Heart in Hoop City's blog.