Mo’ne Davis shifts her drive to the basketball court

It’s not every day that a 13-year-old inner-city girl becomes an overnight celebrity. But it was at this time of year, back in 2014, when Mo’ne Davis did exactly that.

Playing for Philadelphia’s Taney Youth Baseball Association at the Little League World Series, Davis became the first girl to pitch her team to a win in Williamsport, Pennsylvania. Today, her name still has the weight of some of the biggest stars in American sports.

Now, though, her focus has shifted from the diamond to the hardwood.

Davis, 15, is heading into her sophomore year of high school at Springside Chestnut Hill Academy. She dreams of a career in the WNBA, and she knows the journey begins with the process of college recruitment. That’s why Davis has made the decision to forgo high school basketball this season – after representing her school as an eighth-grader and a freshman – and exclusively play AAU with the Philly Triple Threat team, where she can go head to head with the best talent in the nation.

“I made the decision because it was time to start getting out there in front of college coaches and showing my improvement over the next two years,” Davis said.

She isn’t resting on her fame to get her to the next level. Davis wants to go against the best competition around. When she speaks about the challenges of the AAU circuit, the fierceness she showed on the mound in Williamsport pours out.

“There’s a lot of girls that are really good at my age and older,” she said. “I just wanna go out there and show them you can be ranked, but you have to prove on the court why you’re ranked. And we’ll just have a battle, just go right at it. … And we’ll see who wins at the end.”

While Davis is a natural competitor, she also is a pioneer for young women in sports. But she isn’t naive about the challenges still ahead. She is fully aware that the women in her dream league aren’t appreciated like their counterparts in the NBA. Still, she is optimistic.

“No matter what level it is, everything [between men and women] should be treated the same,” she said while the Olympics were in full swing. “The [USA] women’s team is just blowing out girls. The men’s team – I’m not trying to throw shade or anything – just won by like three points.” 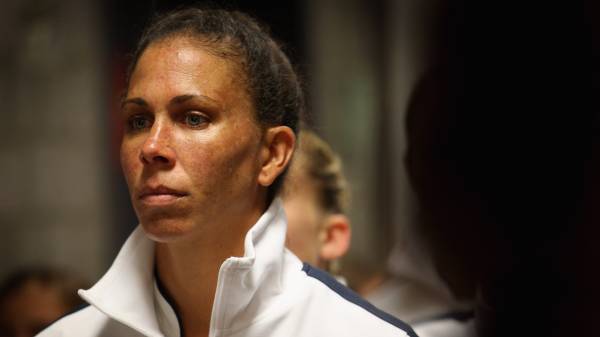 Davis is hopeful that what she did in Williamsport, and what she continues to do athletically, is a part of a larger movement to recognize and respect women in sports. All sports.

“This is a perfect time because of what the U.S. gymnastics team just did,” she said. “It just boosted a lot for female power. Now people can see – give girls a chance, and we’ll show you why we should have some more TV coverage. A lot of women are just proving it right now.”