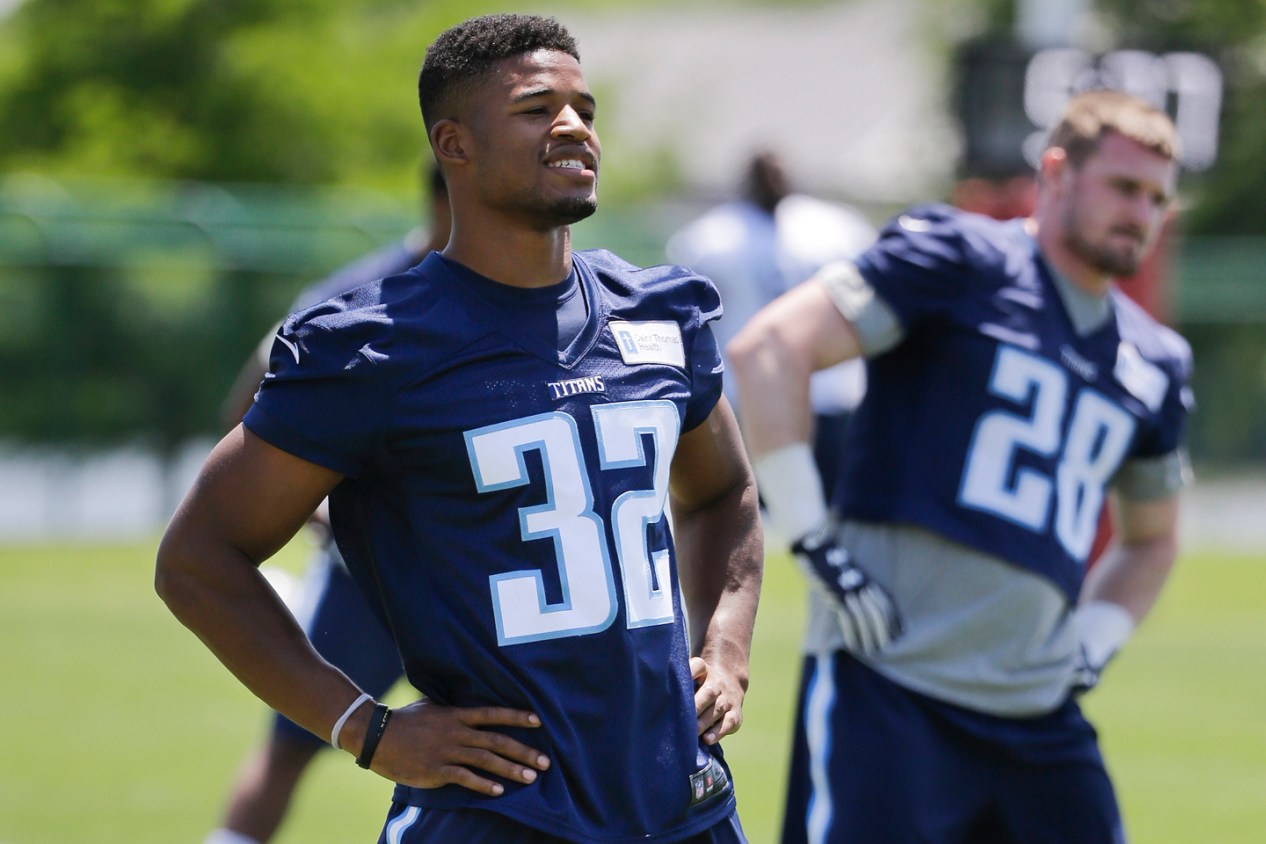 Drafted 253rd by the Titans, Kalan Reed aims to show he belongs in the NFL

When Kalan Reed told his family and friends that he was about to be selected in the 2016 NFL draft by the Tennessee Titans, the nearly 30 people watching the event at his grandmother’s house in Atlanta broke out in applause.

Then things got weird. Reed saw a woman on the screen holding a Titans helmet. But as his name was announced, the man next to her unfurled a Denver Broncos jersey with the name “Mr. Irrelevant” stitched above the number “253.” Then came a series of jokes about him being irrelevant, from the podium and the NFL Network set at the Chicago event.

His mother, Keyaschei Reed, was boiling.

“Yes, she was getting upset,” Reed recalled, laughing. “My mother couldn’t understand why anyone would be calling her son irrelevant. I was also thinking, ‘Why are they showing a Broncos jersey?’”

The explanation for the jersey was simple: The Super Bowl champion Broncos traded the last pick (and a fifth-round pick) on the last day of the draft to the Titans for a 2017 selection. That caught everyone off guard because who trades the last pick of the draft? There was no time to make a new jersey.

Explaining Mr. Irrelevant took a little research. After surfing the net, Reed learned that the title and Mr. Irrelevant Week were launched in 1976 by Paul Salata, a former professional football player who wanted to highlight that “it’s not a negative to be picked last in the NFL draft; rather, it’s an honor to be drafted at all.”

The “week” is actually a weekend, which occurred this year from June 3-5 in Newport Beach, California, and includes a parade and a banquet. Through the years, the organization has donated more than $1 million to various charities from money that is raised through sponsorships that range from $2,500 to $20,000.

Getting selected on April 30 with the 253rd pick of the seventh round ended a long three days for Reed, 22, who was an All-Conference USA cornerback during his senior season at University of Southern Mississippi, where he majored in sports management. (He’s one semester shy of graduation.)

Reed is fast: He ran a 4.38 40-yard dash at the Southern Mississippi pro day. He can leap: His pro day vertical was 41 ½ inches, which is why friends call him “‘Roo.” That quickness, jumping ability and size (he’s 5-foot-11, 198 pounds) factored into Reed’s ability to break up 19 passes last season and record four interceptions. He ran two back for touchdowns.

The Washington Post, in outlining the perfect NFL draft, had Reed being selected with the 38th pick of the second round by the Jacksonville Jaguars. But that was an outlier. Other projections had him going late in the draft.

Still, after having positive conversations with every NFL team after his pro day, Reed had high expectations when the draft began on April 28.

Then came the disappointment.

He watched the first round on April 28 with family and friends. Nothing.

They got together the next day, Friday, for rounds two and three. Nothing.

When the draft resumed on Saturday for rounds four through seven, Reed had had enough. He bailed on the family gathering, retreating to another room in his grandmother’s house.

“I had to do something to take my mind off the draft,” Reed said. “It was frustrating. I kept having teams call me, and then they wouldn’t pick me. Watching guys go before you — guys you know your stats are better than — that’s tough.”

As the seventh round began, Reed’s phone began to blow up with calls from teams telling him they were still interested. So he returned to watch the telecast as more picks were announced.

When the next to the last pick was announced and his name still wasn’t called, Reed got on the phone with his agent to discuss free agent options.

That’s when the Titans called.

“Getting the call and then watching your name and highlights in the draft was surreal,” Reed said. “I was on an emotional high for another whole week, not really believing that I had actually gotten drafted.”

Among the festivities: Reed walked/ran a 5K. He attempted to surf. Reed even did the Miss America wave from the backseat of a car during a parade held in his honor.

The big event of the weekend is the Mr. Irrelevant banquet, where the honoree is roasted before being given the Lowsman Trophy. (A play on the Heisman Trophy, the Lowsman features a player fumbling the ball.)

Just before he was given the trophy, the presenter read off a long list of Mr. Irrelevant winners who did not make an impact in the NFL.

“I thought it was funny,” Reed said.

Reed is hoping he’s not on that list next year.

It’s true that expectations for the last pick of the NFL draft are low. Of the 40 previous Mr. Irrelevants, only 15 played in an NFL regular-season game.

But the last four last picks are still on NFL rosters. Last year’s selection, Gerald Christian, signed a four-year, $2.3 million deal and received a $52,000 signing bonus with the Arizona Cardinals.

If Reed makes the Titans’ 53-man roster, he would join Ryan Succop, Mr. Irrelevant in 2009, as a teammate. Never have two honorees played on the same team. Succop, who is entering his eighth season, is the most successful Mr. Irrelevant in NFL history.

Reed has already impressed the Titans coaching staff, drawing praise from coach Mike Mularkey during organized team activities the week before he traveled to Newport Beach.

“Kalan has stood out to me,” Mularkey told The Daily News Journal in Tennessee. “He can run and doesn’t even look like he’s winded. He had really great awareness.”

Only 1.6 percent of NCAA football players make it to the NFL. And Reed just might have a shot. He’s joining a team whose greatest weakness is its secondary.

“Making the transition to the NFL is a challenge,” Reed said. “But I’m confident in my ability and I’ll give it my best shot.”

Making the team would make him relevant. But Reed will never forget his Mr. Irrelevant title.

“It was an unforgettable weekend for me and my family,” Reed said. “I didn’t understand what it was all about, but I wound up having a great time.”