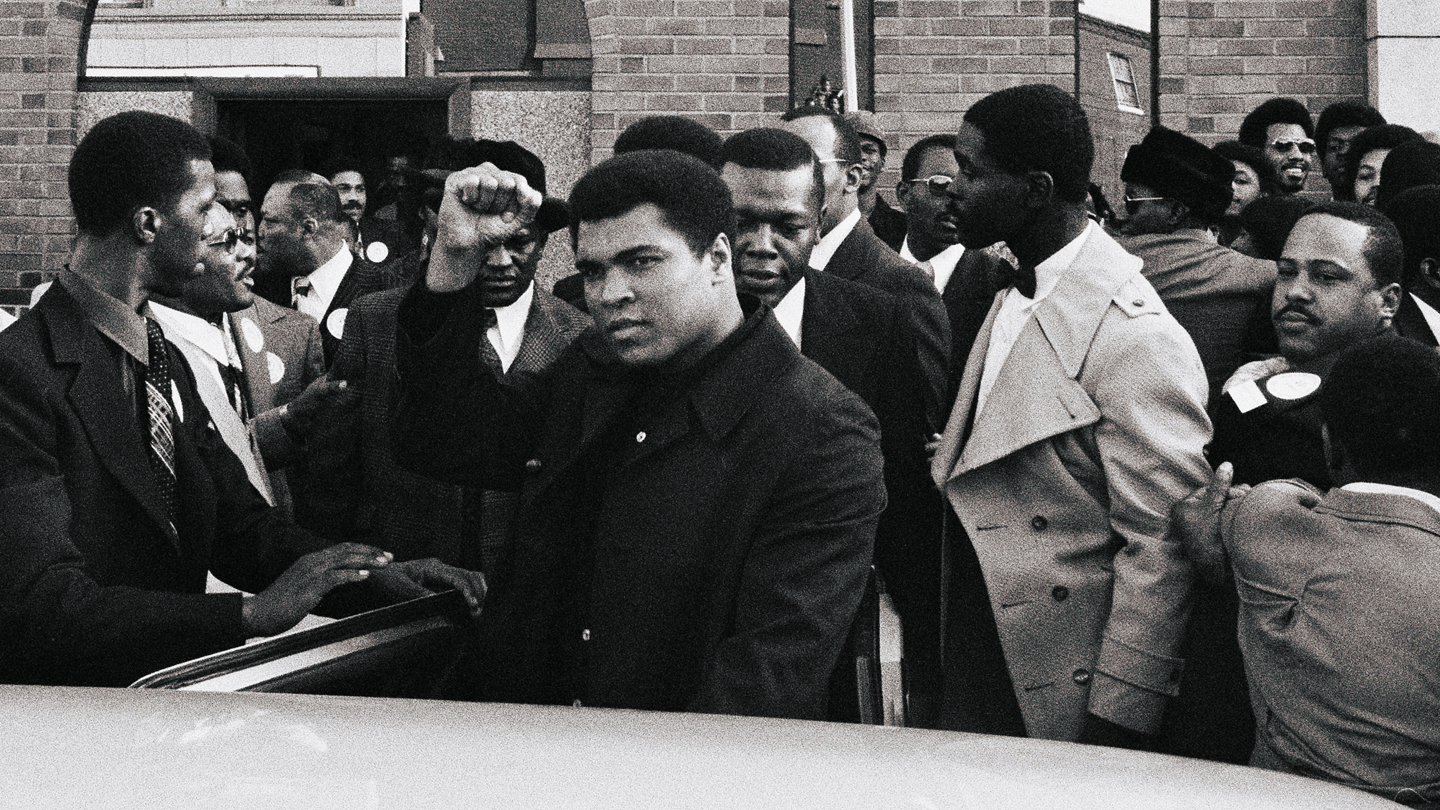 Muhammad Ali and the complexity of black identity

The Champ who changed the rules

The day after shocking the world by defeating heavily favored Sonny Liston for the heavyweight championship in 1964, Cassius Clay shook things up even more. He announced that he was joining the Nation of Islam and renouncing his “slave name.” Soon, he would be known as Muhammad Ali.

That bold assertion of black identity was discomforting to both whites and blacks. For many whites, who knew nothing of the Nation of Islam and its ideology of black separatism, it challenged everything they thought they understood about African-Americans, and opened a window to the complexity and diversity of black identity.

For African-Americans, long accustomed to papering over internal differences to present a “respectable” and unified front to the white world, it revealed long-standing – and still ongoing – debates over political outlook, self-image and even style.

Ali made both groups confront the question of what it meant to be black in a majority white society.

Decades later, the question still echoes in ways both profound and picayune. The nation’s first black president has been criticized for not doing more to forge a black policy agenda. Is he black enough?

Justice Clarence Thomas is the only African-American on the U.S. Supreme Court. He opposes affirmative action, saying it stigmatizes its beneficiaries. Does that make him a racial sellout or a man of principle?

Darius Rucker first found musical success as a guitarist and lead singer for the rock band Hootie and the Blowfish. As a solo act, he has become a country music star. Is that a black thing?

More than any athlete of his time, Ali challenged the nation’s limiting notions of black identity. “I think he raised the fact early on that all African-Americans were not cut from the same cloth and we all did not have the same consciousness as such,” said Dewey Clayton, a University of Louisville political scientist.

When Ali took the championship from Liston, there was a widely accepted role for athletes, particularly black athletes. They were to play their games, reap their ample rewards, and remain apart from the social turmoil percolating around them. In the eyes of many civil rights leaders, who were about the business of proving that black people belonged as full-fledged citizens, black athletes were supposed to be “credits to the race,” dignified and not showy.

Ali rejected all of that. He was the Louisville Lip, mocking opponents and often predicting victory in rhyme, at a time when athletes were mostly stoic. He also deigned to be more than just an athlete. He was a man of religion. He chose to take political positions, and to be a social critic.

At the time, a prominent black athlete could have done few things that would have been more unsettling. He became a Muslim in a country that saw itself as Christian. He questioned a war and defied the draft, at a time when most of the country saw that as unpatriotic. At a time when fighting for civil rights meant pushing for integration by marching or sitting in, Ali did neither. Instead, he joined a religious sect that preached racial separation.

As skeptical reporters pressed him about his religion and his name, the new champ refused to back down.

It barely mattered that Ali was not always consistent. The man who defied the draft later advocated for it. The global icon at times looked down on less developed parts of the world. Yet, he asserted his blackness and self-respect in ways that African-Americans often found inspiring.

“He would ask things like why is Tarzan white and king of the jungle,” Clayton said. “He would ask why the media would beautify everything white, and do the opposite with everything black. This came at a time when black men were not supposed to stand straight and look white people in the eye.”

Ali was not the first black athlete to do things on his own terms, of course. Jack Johnson waved a middle finger at convention by whipping white men in the ring, and dating white women outside of it. Paul Robeson, the Rutgers football star and valedictorian turned singer and actor, spoke out against U.S. imperialism and social injustice. Both Johnson and Robeson were relentlessly persecuted by the government and largely silenced. And they were never widely embraced as American heroes, never mind global icons.

Jackie Robinson is beloved, maybe now more than ever. But early on, he largely suppressed his instinct toward fierceness in service of the cause of integrating baseball. But after Ali, the rules changed.

Ali’s rebelliousness was rooted in the same racism that moved Johnson, Robeson, and Robinson. He grew up in Louisville, Kentucky, during Jim Crow segregation, a reality that grated on Ali as he grew older. African-Americans could not try on clothes in downtown department stores, sit near whites at movie theaters, or buy homes in many Louisville neighborhoods.

In those days, University of Kentucky basketball coach Adolph Rupp was his state’s sports hero. Rupp, who led Kentucky from 1930 to 1972, was one of the most successful coaches in collegiate history. But the so-called “Baron of the Bluegrass” resisted recruiting black players until 1970, long after many other Southern schools were fielding integrated teams.

All of that had an effect on Ali.

“Lots of things were working in my mind,” Ali told one of his biographers, Thomas Hauser. “In my own life, there were places I couldn’t go, places I couldn’t eat. I won a gold medal representing the United States at the Olympic Games, and when I came home to Louisville, I still got treated like a n—–.”

Back home in Ali’s old neighborhood in the West End, even people who had known him all of his life did not know what to make of some of his new identity. When he said that he was becoming a Muslim, they wondered what happened to the Bible-toting young man who used to shadowbox through the neighborhood.

“Mostly, our people were against it,” said Lawrence Montgomery, 81, a longtime friend who still lives on the same block where Ali grew up. “That was because we did not know what the Nation of Islam was all about. But then, I decided if that’s what he wants to do, that’s his business.”

The neighbors thought much the same when Ali refused to be inducted into the military during the Vietnam War, famously saying “I ain’t got no quarrel with them Viet Cong. No Viet Cong ever called me n—–.”

For a time, that decision brought him widespread scorn. Yet, as the nation turned against the Vietnam War, the rebel became a hero and his fearlessness proved inspiring.

“Every young man in this country who finds this war objectionable and abominable and unjust will file as a conscientious objector,” civil rights leader Martin Luther King Jr. said. “And no matter what you think of Mr. Muhammad Ali’s religion, you certainly have to admire his courage.”

That sense of independence lifted him to prominence and eventually unparalleled popularity. Former President Bill Clinton will deliver a eulogy at his memorial service at downtown Louisville’s 22,000-seat Yum! Center on Friday. Utah Sen. Orrin Hatch, King Abdullah II of Jordan and comic Billy Crystal are also among those scheduled to speak.

Still, some things have changed and others have not since Ali stood up for himself. Many black athletes are applauded now when they make political statements even if their actions come with few of the risks that confronted the former champ. Cleveland Cavalier LeBron James and other NBA players were widely celebrated for wearing “I Can’t Breathe” T-shirts during warm-ups before a 2014 game in Brooklyn, New York, to call attention to the killing of Eric Garner by New York City police.

Other prominent athletes are criticized for not doing enough. Michael Jordan has never lived down his decision not to endorse black U.S. Senate candidate Harvey Gantt of North Carolina when he was running against Republican Sen. Jesse Helms, who was widely condemned as a racist.

The debate continues to rage over the value of respectability, whether it is more effective to work within the system to effect change, or to agitate from outside. Black Lives Matter protesters have taken to the streets in many cities, including those run by black politicians, to protest police brutality. Meanwhile, some black elected officials and others have challenged these activists to do more to combat the street crime that claims thousands of black lives each year.

And if Americans are now more familiar with Islam than they were when Ali converted in 1964, it seems that much of the old suspicion remains. Polls have found that more than half of Americans hold unfavorable views of Islam. And one poll late last year found that nearly half of Americans support presumptive Republican presidential nominee Donald Trump’s proposal to impose a temporary ban on Muslims entering the United States.

Once, Ali’s choices cost him his heavyweight title, more than three years of his boxing prime, and untold millions of dollars. Now, Mitch McConnell, the top Republican in the U.S. Senate, who once vowed to limit the country’s first black president to one term in office, took to the floor to extol Ali, calling his story “an American story” that touched people “in every corner of the world.”

In a statement issued by the White House, President Barack Obama noted that in his private study off the Oval Office he keeps a pair of Ali’s boxing gloves on display. Just above them is the famous photograph of Ali standing over a fallen Liston. The president went on to quote the former champ.