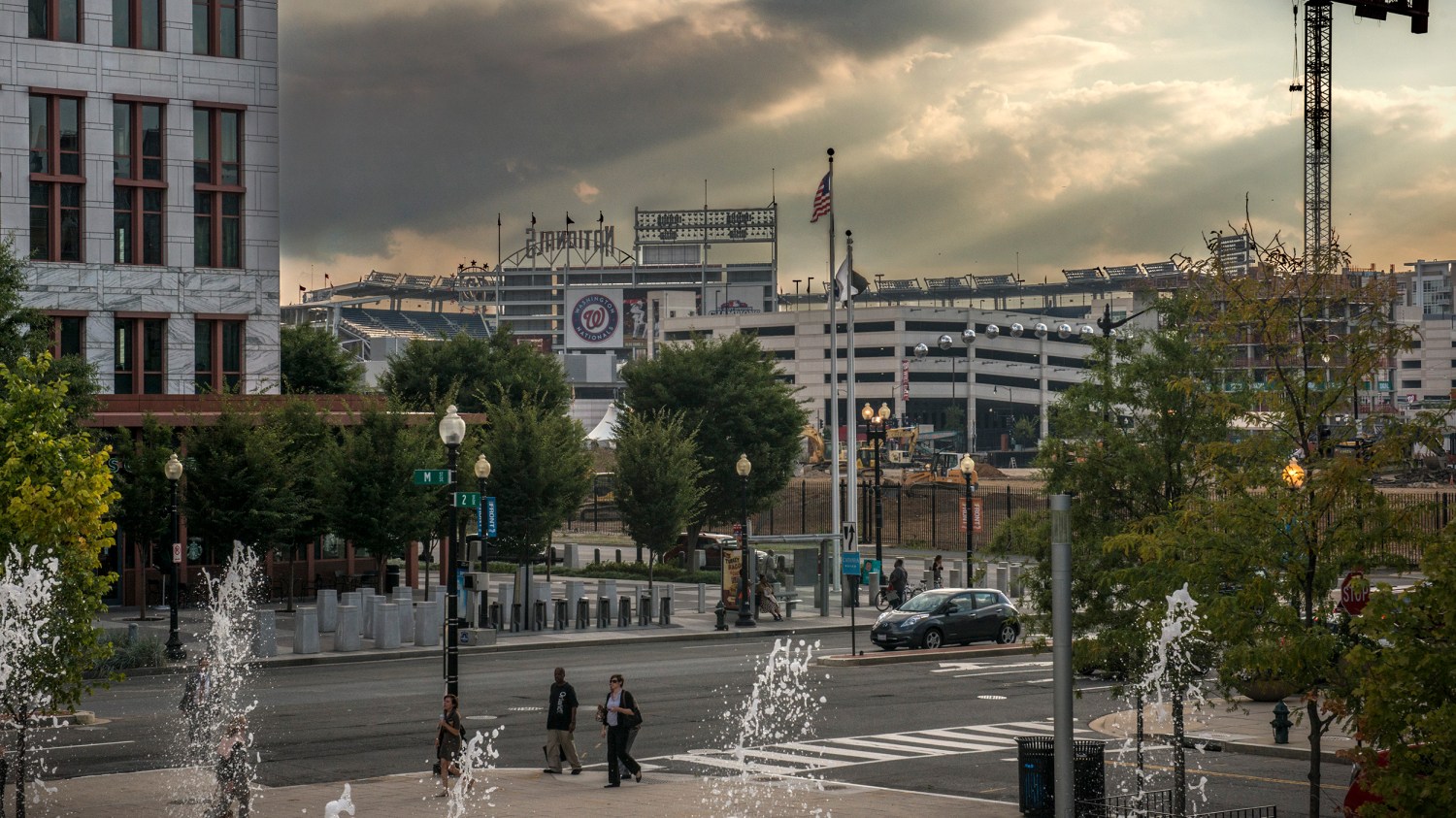 Gentrification has brought change, not just to my neighborhood but to the entire city

“Chocolate City,” referring to Washington, D.C.’s nearly 70 percent black population in the latter part of the 20th century, has been transformed in front of my very eyes. Fewer black folks in the city today is truly ironic, partly because this detraction is due to the sport that is known typically for lacking enough chocolate.

Southwest Washington, D.C., isn’t the same, and the city hasn’t been, either, for more than a decade.

In 2005, the former Washington Senators of Major League Baseball returned home as the Nationals after a stint as the Montreal Expos. This meant our youths finally had a different set of role models to look up to — not ballers, but ballplayers. Being an impressionable 10-year-old, singing first exposed me to professional baseball in D.C. when I sang the national anthem at a Nats exhibition game with the D.C. Boys Choir.

We were a handful of black boys from all across D.C. who came together in song for a few priceless moments in a world unknown to us. Performing at an MLB game definitely instilled in us a sense of culture shock and possibilities that afternoon at Robert F. Kennedy Stadium in Northeast D.C.

After the Nats’ first season at RFK, city officials revealed they were eyeing major changes to the baseball environment that ultimately affected much of D.C. In May 2006, they began constructing a new baseball stadium on South Capitol Street in D.C., just 250 feet from my boyhood home in Southwest.

One year earlier, I was enthralled by the national treasure I had missed out on as a kid from the city while feeling the contagious energy of the Nats’ home crowd. With a stadium in the works, I wasn’t necessarily prepared to feel that same thunderous applause, fireworks and ruckus. My family has experienced this intense fandom come alive each night the Nats play through the walls of our townhome on Carrollsburg Place Southwest — walls that feel way too thin on game days.

Our house is located right off South Capitol Street, which separates the southern quadrants of the city into Southeast and Southwest, and the team built its stadium at 1500 South Capitol St. S.E. It’s in a different quadrant, but it’s just one block over from my alley.

The stadium definitely has its bright spots, such as festive outings in The Bullpen and occasional live concerts, and D.C. is now officially making a name for itself as a sports town, which makes our fans proud to claim John Wall, Bryce Harper and Alexander Ovechkin. But with all the good that can come from having a stadium or two in the neighborhood, there are even greater consequences that have affected my family for over a decade. Not only are we witnesses to the removal of black people from Southwest, but the entire neighborhood feels this industrialization and the gentrification that came along with it.

Todd Grosshan bought a rowhouse near the stadium when it was being built, and both sets of his neighbors were uprooted. “We had neighbors on either side of us; they’re gone,” he said. “But they were renting or Section 8 and they didn’t own their houses, so the owners decided property values are high enough and they said, ‘OK, time for y’all to go.’ ”

The city desperately tried to get my family to give up our spot on the block. We wouldn’t go, and neither would many neighbors around the way who just wouldn’t budge.

Keya Kennedy, a Southwest resident who has lived in Syphax Gardens Public Housing since before the stadium was built, didn’t fear pushback from contractors. “This is our city, [and] if we work and pay our rent the same way like anybody else, then we deserve to be here just as well,” she said. “They tried to put fear in us, but that didn’t happen.”

The city has a history of attempting to put fear in black residents, and this cycle is deeply rooted in Southwest. Therefore, today’s gentrification is actually no coincidence. In 1952, according to There’s No Place Like Home: Anthropological Perspectives on Housing and Homelessness in the United States, the Redevelopment Authority enacted a “renewal plan” for Southwest that drove out its thriving black community at the time. The black population in the District went from 71 percent at its peak in the 1970s to losing the majority in 2011, just three years after the Nats came to Southwest.

The “ballpark in the ‘hood” has caused the tearing down of many longtime D.C. establishments, and the “new and improved” Southwest has since experienced new visitors frequenting the neighborhood.

Kennedy notices more white people, but not only during baseball games. “Every day, going to the Metro, in our stores,” she said. “Everywhere.”

Our black residents are annoyed that we don’t have access to many places that were signs of our identity. They were replaced.

“There are no gas stations around here, and no fast-food places or places for us to eat,” Kennedy said. Besides the lack of accessibility to basic necessities such as food and fuel, Southwest is missing its social atmosphere as well. The city razed many hallmarks of our once-black community, such as the nightclubs like Zanzibar and H20 on the old Waterfront.

“That was the spot,” said Michelle Stanton, a resident of D.C. for 30 years after moving here from Rhode Island. “That’s where black people went because they felt comfortable.”

All around the stadium there are new hotels, dry cleaners, banks and a trendier look for the newest occupants. I’ve never seen so many “coming soon” posters on street corners. To some, it may appear to make the area more accommodating for fans and tourists, but in reality it has driven out those who look like me.

“They came in, and they kind of bullied their way in,” said Stanton, who lives on Half Street Southwest. “They had no respect for black people … they didn’t care about black people.”

Grosshan broke down D.C. and the current state of gentrification in the simplest way he could: “Well, black folk are leaving and white folk are coming in,” he said.

Contrary to Henry Louis Gates Jr.’s four-hour series Black America Since MLK: And Still I Rise, this is quite the opposite of white flight; it’s yet another form of black migration and the African diaspora. Now it is, as the adage goes, out with the old (black) and in with the new (white).

“Chocolate City” might not ever reach the chocolateness of its heyday, according to Stanton. “That’ll never happen again,” she said. “It’s white chocolate.”

Some of us miss the real Southwest D.C. and the oh-so-real D.C. We could do without this white chocolate substitution.

“I’ve noticed a lessening of that ethnic flavor,” Grosshan said, referring to the music and partying he used to hear at night in his alley. “That’s just because of the changeover in people.”

The stadium didn’t clean up the community, it just cleaned many of us and our institutions out. An emblem of black neighborhoods has always been the black church. Second Baptist Church Southwest used to be located across from the Southwest DMV, but it sold its property and moved to District Heights, Maryland, in 2011. The neighborhood became too expensive because of the ballpark.

“[The stadium] had a definite impact on our ability to stay in Southwest,” said Janice Lucas, chairman of the church’s board of trustees. “We had been there since the early ’50s.”

Without our churches, urban flavor and ethnic atmosphere, the chocolate west has been depleted, and the District has gone from a chocolate city to a much lighter and fluffier treat that I call s’mores.

The baseball stadium’s displacement of black bodies, institutions and culture in Southwest, much like D.C.’s state of gentrification, signifies how some corporations and the many new white folks view us.

“We’re just a color to them,” Stanton said. “I guess we don’t matter.”

Arthur Jones II (@arthurjonesii) is a former Indiana Hoosiers cornerback turned multi-skilled journalist and producer straight outta D.C. He once sang with his a capella quintet on a concert tour traveling along the Andes Mountains. arthurjonesii@arthurjonesii.com