As Jonathan Kuminga was growing up in Congo, the 2021 NBA draft prospect had minimal access to American basketball save for 30-minute sessions (or an hour, if he was lucky that day) at the local internet cafe where he could load up highlights of Kobe Bryant and LeBron James on YouTube.

When the combo forward, who averaged 15.8 points and 7.2 rebounds in the NBA’s developmental league this season, wanted to play basketball in his home country – a sport that took him from a war-torn Congo that has been in one form of conflict or another for nearly three decades to the precipice of NBA stardom – there was rarely ever access to indoor courts or adequate basketball shoes to play in. Not to mention the level of training needed for elite basketball talents such as himself.

Those years in Congo, and the last five years he’s spent playing high school and professional basketball in America since (Kuminga moved to the United States in 2016), has made the 18-year-old both grateful for the opportunity he’s earned by being a top-10 prospect in this Thursday’s NBA draft, and dedicated to making sure he’s not the last Congolese player to make it to the league.

“I want to do great. I want to be great,” Kuminga told The Undefeated last week. “If I make it out. I want people from Africa to be like, ‘If he did, we can do it too.’ ”

Until recently, Africa was not a hotbed of basketball talent. The sport comes second to fútbol on the continent, in part due to the latter’s accessibility. To play fútbol one only needs a ball and nearly any surface to play on. Basketball requires not only a ball, but also a court and basket to play on, and the proper sneakers.

But the selections of Nigerian center Hakeem Olajuwon (1984), South Sudanese big man Manute Bol (1985) and Congolese center Dikembe Mutombo (1991), and the investment in the continent by the NBA at the turn of the century, have opened the floodgates for African talent in the last 20 years, illustrated by the MVP candidacy of Cameroonian Joel Embiid this past season.

Kuminga’s parents used to play basketball, and Kuminga’s older brother, Joel Ntambwe, played three games for Texas Tech this past season before leaving the program for personal reasons. Emmanuel Mudiay, who last played in the NBA for the Utah Jazz during the 2019-20 season, is Kuminga’s cousin.

“I have parents that was in basketball my whole life,” Kuminga said. “So basically I had a chance to touch a basketball at an age that I can’t really remember when was the first time I did it.” 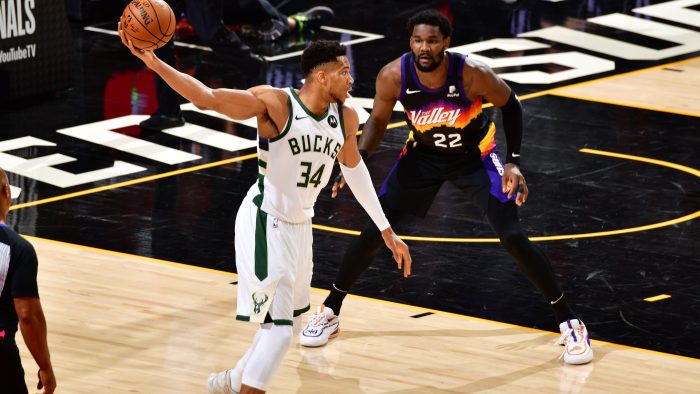 Congo has lagged behind other African nations, namely Nigeria, when it comes to discovering NBA-ready talent. There have been four Congo-born players drafted – Mutombo, Christian Eyenga (2009), Bismack Biyombo (2011) and Mudiay (2015) – with an additional seven players, most notably Atlanta Hawks center Clint Capela (2014), with at least one parent from Congo who have been selected. By comparison, nine players of Nigerian origin were selected in the 2020 draft alone.

While the first-round playoff series between the Milwaukee Bucks and Miami Heat featured nine players of Nigerian origin, and the NBA Finals matchup of the Bucks and Phoenix Suns featured players with ties to Nigeria, Guinea, Senegal and Egypt, a Congo-born player has appeared in just one playoff series in the last four years (Mudiay). And internationally, the Congo men’s national team has never qualified for the Olympics or FIBA World Championships but has multiple FIBA AfroBasket appearances, including this summer.

Kuminga, who was born in Goma, located in the western area of Congo near the Rwanda border, said the country lags behind due to a lack of basketball infrastructure.

“People play basketball, but it’s not really big, because we don’t have certain people that go out there and help the organizations there,” he said. “So a lot of people don’t keep up.”

Even something as simple as access to basketball shoes is a struggle for young people. Kuminga has spoken in the past about having to play in beat-up sneakers throughout his childhood, which led to a lot of slipping and falling on outdoor courts.

“You’re playing games in two weeks, your toes are coming out the shoes,” said Kuminga, whose first language is French.

“I’m going to stay playing, but I don’t have any other shoes. It’s going to take me a lot longer to get another shoes, because that’s my only shoes I might use for basketball, and other shoes I’m going to use to go to games, go to school.

“If we had a better organization, people who are really helping, I think we’ll produce a lot of players. And that’s the thing we try to really focus on … as long as I make it, I’ll go back home and give people gear, shoes and stuff like that.”

But if Kuminga were to be selected within the top six in Thursday’s draft (he was predicted to go eighth overall in ESPN NBA draft analyst Jonathan Givony’s most recent mock draft), he’d surpass Mudiay (seventh overall, 2015) as the highest-drafted Congo-born player since Mutombo was selected fourth overall in the 1991 draft by the Denver Nuggets, and would become the second active player from Congo in the league, joining the Charlotte Hornets’ Biyombo. (Patrick Mutombo, who played in the NBA’s developmental league during the 2009-10 season, is the head coach of the Toronto Raptors’ G League affiliate.)

Besides helping grow the game of basketball in his home country, Kuminga also wants to use his now-heightened platform as an NBA draftee to call out human rights violations in Congo and in the United States.

Kuminga was born in a country that was still dealing with the fallout from the genocide in neighboring Rwanda and the First Congo War. The Second Congo War, which claimed more than 5 million lives, ended just a year after Kuminga was born in 2002. Civil conflicts have ravaged the country ever since.

While Kuminga has never gone into detail on what he witnessed as a young boy growing up in Congo during this time, last spring he compared the protests in the wake of the police murder of George Floyd to the “atrocities” he witnessed in Congo, inspiring him to “stand up against any type of prejudice, discrimination and racism that we still experience everywhere in the world.”

During that time, Kuminga was well aware of which college coaches who were recruiting him, including those from Duke and Kentucky, were speaking out about anti-Black racism in America. (Kuminga eventually skipped college altogether and played for the G League Ignite, a developmental team specifically for NBA draft prospects, this past season.)

“Growing up, I was having a situation. My parents really tried to help and provide for me and staying away from those types of things,” Kuminga said. “I don’t really be speaking about that, but, like, the things that used to be going on ain’t right, so it just makes people feel bad. And especially as Africans – not just Congo, African kids – and all coming to the U.S., it’s like the dream come true.

Kuminga hopes that his selection on Thursday will lead to more investment and commitment to Congo so that one day there’ll be more Mutombos, Biyombos, Mudiays – and Kumingas – playing in the NBA.

“I want to accomplish so many goals in basketball that one day they’re going to be talking about that kid from Congo,” he said. “And then when they’re talking about that kid from Congo, it’s going to bring a lot back to Congo that they want to find out who else is going to be the next one. What Congo need? What type of help they need to produce more kids like that? That’s what it’s about.”