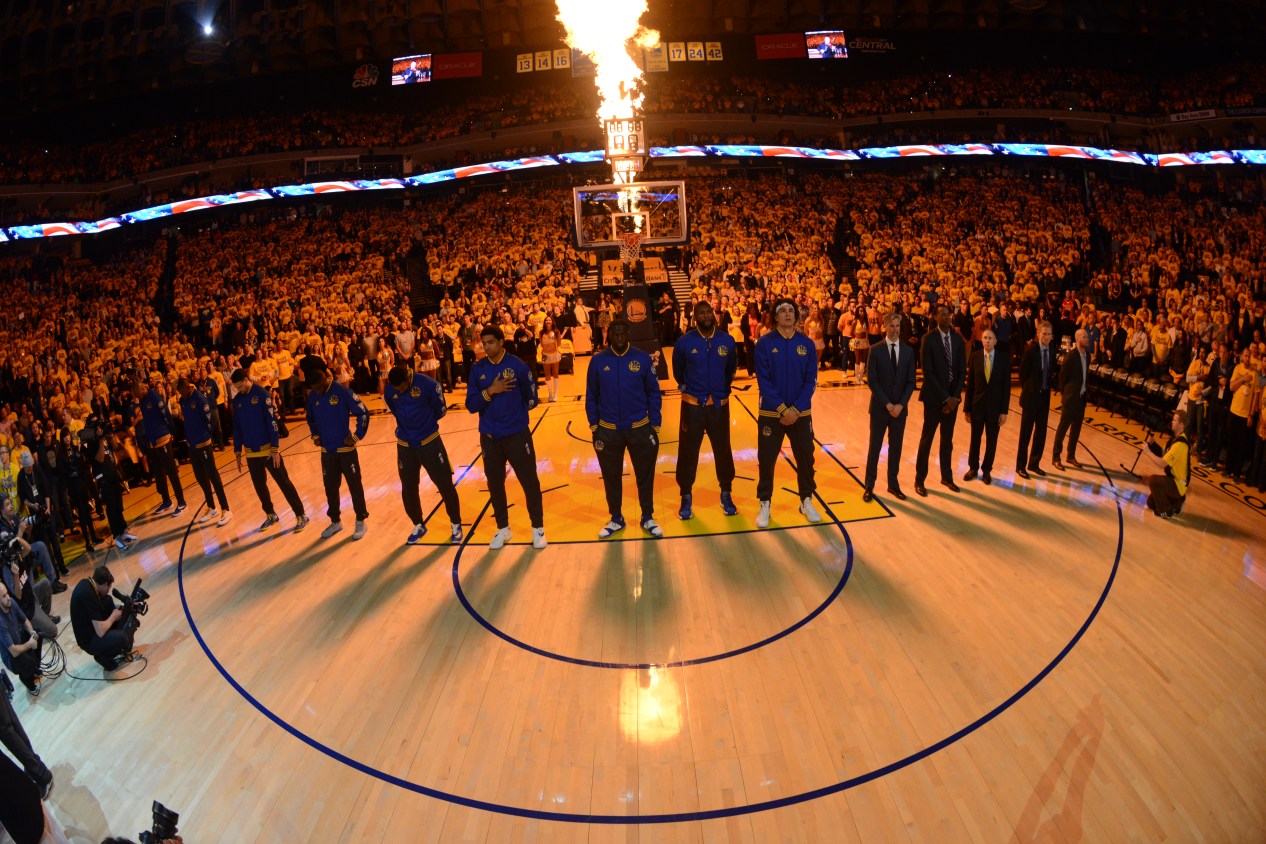 The Golden State Warriors line up for the National Anthem before playing against the Portland Trail Blazers in Game Two of the Western Conference Semifinals during the 2016 NBA Playoffs on May 3, 2016 at Oracle Arena in Oakland, California. Noah Graham/NBAE via Getty Images
NBA

Nine-year-old Andre Iguodala Jr. proudly put on a Colin Kaepernick jersey to wear to his fourth-grade class the day after the San Francisco 49ers quarterback first declined to stand for the national anthem. But before the son of the Golden State Warriors swingman arrived at his elementary school, receiving a blessing from his father was a must.

Knowing his son’s true intention behind wearing the jersey and how he has been “taught to think his own way,” Andre Iguodala Sr. proudly supported the young boy’s choice.

“I was happy. He’s expressing himself,” Iguodala Sr. told The Undefeated on Monday. “He understands what Kaepernick is trying to say. The problem is no one wants to accept what he is saying. They want to be blind to the fact that we are treated this way. And when someone does stand up, they don’t like the gesture or the way they’re standing up. They’re not getting to the actual issue.”

There was a lot of talk during Warriors media day Monday about the arrival of NBA star Kevin Durant, the team falling shy during the 2016 NBA Finals, Golden State beating its 73-win record and more. Kaepernick, however, was a hot issue. The Warriors players supported the 49ers quarterback, saying they believe that his stance on injustices toward African-Americans is being overlooked.

Kaepernick has either chosen not to stand or taken a knee during the playing of the national anthem before games this season in protest against what he views as injustices against black Americans at the hands of police. His actions have sparked protest, debate and controversy nationwide. While there has been both a fair share of support for and criticism of Kaepernick, his stance has gained increased notoriety amid recent fatal police shootings of black men in Tulsa, Oklahoma, and Charlotte, North Carolina.

Last week, Warriors coach Steve Kerr said that Americans should be “disgusted” about the police shootings of unarmed African-Americans regardless of where they stand on Kaepernick. The Warriors will take part in the first NBA preseason game against the Toronto Raptors in Vancouver, Canada, on Saturday. Kerr said he will leave it up to his players on a predominantly black roster to decide how they will respond when The Star-Spangled Banner is played.

Two-time NBA MVP Stephen Curry told The Undefeated there is a “100 percent” chance there will be a “conversation as a team” before the game about a possible uniform “gesture or stance” that may or may not take place during the national anthem.

“I respect the national anthem,” Curry told The Undefeated. “I’ve done a lot of stuff with the military before and I kind of understand, like Colin said, he is not disrespecting them at all. To our family, it does mean something. But there will be a conversation with my teammates, whether we find a way to have a unified gesture or stance, maybe not even during the national anthem, but something that we use that platform. We will see what comes out of that.”

Warriors newcomer forward David West told The Undefeated that he has yet to decide whether to protest the national anthem, and that each player should make his own decision.

“Protest is an individual thing. It’s based on your own personal conviction. I don’t think anybody should feel compelled one way or the other. Particularly, don’t feel pressure to do it because other guys are doing it,” West told The Undefeated. “Be personally convicted. Feel like if you’re doing something, what you’re doing is from you and not because it’s the popular thing to do.”

While Warriors forward Draymond Green described it as a “very touchy subject,” he also gave a passionate response.

“A lot of changes need to be made, and it’s not just the killing of black people,” Green said. “That’s obviously rough and crazy to me … Everybody has been talking about the stuff that Colin started. I respect Colin for that because he took a stand that he knew would probably create some controversy. And he didn’t care. And I respect that because sometimes controversy is needed in order to get the point across. And I think he’s gotten his point across.

“But my question is, ‘What’s next? Where do people take action?’ Now the conversation is started, he’s done a great job and everybody wants to criticize him or say he’s disrespecting the flag or disrespecting the military. It’s not about disrespect … He’s trying to show the need for something that needs to be done. And of course, everyone wants to talk about Colin and [how] he’s disrespecting America. No, we’re going to talk about what he’s doing and try to sweep what he’s really talking about under the rug. I think it’s quite ridiculous, to be quite frank.”

“Starting a conversation about the injustice was the whole goal in the first place,” said Durant, the 2014 NBA MVP. “It was not about how he was going to give the message, it was what he was trying to get out, the change that needs to happen in our country. And I think just having that conversation is great.

“It’s great what he is doing and how he’s backing it up. He’s just not trying to get attention,” Thompson said. “He’s really trying to make a difference. He’s getting all the jersey sales and he’s pledging $1 million to different organizations. It’s great. I don’t think he is trying to disrespect the military or anyone who has fought representing this country. I think he is trying to make a change for people who don’t have a voice like he does.”

West compared Kaepernick’s actions to someone being drowned with “the environment around you, and the waves and current getting stronger,” and once the person’s head is above water, “you hear people in the boat complaining about you splashing.”

“We’ve got to look at ourselves and ask whether folks are capable of treating other people like human beings,” West said. “That’s a fundamental question we have to ask before we get to the color of your skin. Do people have the capability to recognize humanity in other people? When you shoot somebody with their hands up, as a human, you should feel that. When you’re choking someone to death and you have your arm around their neck and they say, ‘I can’t breathe,’ you should be able to feel that s—.

“And if you can’t feel that s—, then I’m wondering if you have the capacity to recognize humanity. That’s what all of this is about. And until we’re ready to have a serious conversation like that, people are going to continue to fuss about somebody taking a knee … ”

Curry has only met Kaepernick once, but said he would love “to sit down and talk to him, to kind of understand his thought process in more detail.” Curry also spoke about the recent police shooting death of Keith Lamont Scott in his hometown of Charlotte and the protests that followed.

“It’s another experience and opportunity for people to use their voice,” Curry said. “The first night in Charlotte, it turned that way, and that’s tough to see, especially growing up in that city. I know that’s not what we’re about, who we are as Charlotteans, and you never want to be in that negative spotlight. But as it went forward, everything was very constructive and productive.

“So obviously, praying for the Keith Scott family, the officer’s family, the people that are going through some very tough situations right now. But also just for the city. The city understands they can use their voice and they should do that. But violence is never going to solve anything.”