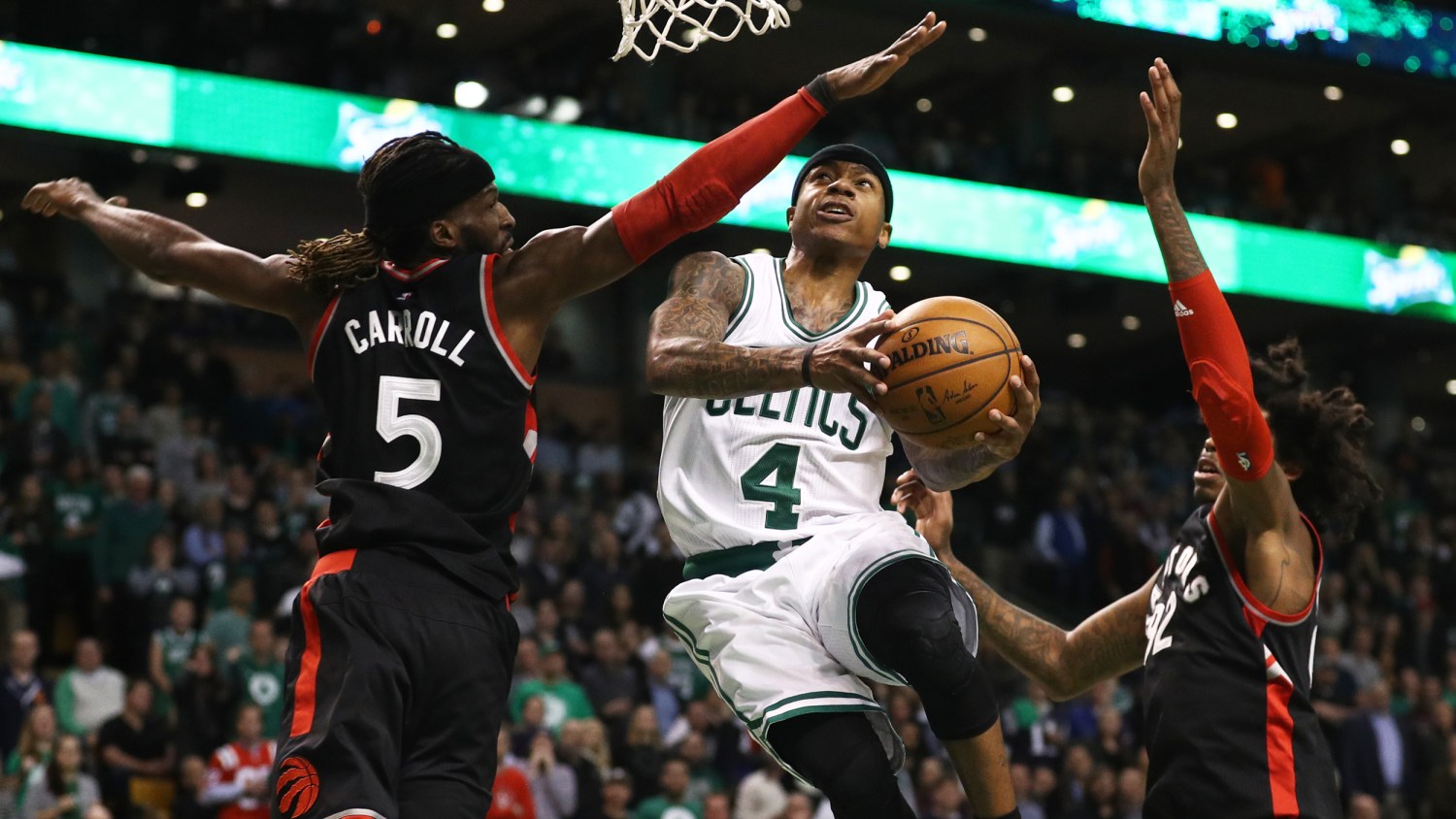 Isaiah Thomas #4 of the Boston Celtics takes a shot against DeMarre Carroll #5 of the Toronto Raptors and Lucas Nogueira #92 during the fourth quarter at TD Garden on February 1, 2017 in Boston, Massachusetts. Maddie Meyer/Getty Images
Basketball

From Isaiah Thomas to Marcus Keene, the magnificent Five-Nines take it to the rack

In basketball this year, height is only a number

There’s only one number players are powerless to change: their height.

That’s what makes the Five-Nines so magnificent.

This season, two 5-foot-9 players, Isaiah Thomas of the Boston Celtics and Marcus Keene at Central Michigan University, are putting up some of basketball’s biggest numbers, averaging close to 30 points per game. Both are absurdly short in this tall man’s game. Both are inspiring another 5-9 point guard, Evan Gilyard, who just guided the storied Simeon Career Academy to a Chicago high school championship.

The odds are stacked against the Five-Nines. No NBA player is shorter than Thomas. No collegian as short as Keene has led the nation in scoring in almost 70 years. Only one ranked high school senior is listed as being shorter than Gilyard.

“Everybody, every step of the way, they always told me I was too small. I wasn’t gonna make it,” Thomas told The Undefeated as he prepared to play in his second All-Star Game.

Doubters have always tried to keep them down.

Yet still they rise.

“I was always a short kid. But people looked up to me, because of sports, so I never got bullied or stuff like that,” said Keene. “Also, they knew that I’m tough, and I ain’t really going too much for none of that other stuff. I take the same mindset on the basketball court.”

Even after earning all-state honors at Warren High School in San Antonio, Keene’s lack of size scared off every Division I college except Youngstown State. Unhappy with being pigeonholed there as a spot-up two-guard, Keene transferred after his sophomore year to Central Michigan. While sitting out a year as a transfer, Keene proved unguardable in scrimmages. That earned him the greenest of green lights, as proven by Keene’s 360-degree 3-pointer against Green Bay. He’s shooting an efficient 45 percent from the field and 36 percent from behind the arc to go along with 4.9 assists and 4.5 boards per game.

Only 69 of 5,341 Division I players are 5-9 or shorter, compared with 98 who are 7 feet or taller. Keene, a junior, will be the shortest player to lead Division I in scoring since 1947-48, when 5-9 Murray “The Rampaging Redhead” Weir averaged 21 for Iowa using set shots and underhand free throws .

Keene was 5-2 in ninth grade and did everything he could to get taller, even bypassing his asthma medicine when he heard it could limit his growth. Thomas had a machine in his basement that suspended him upside down and another to stretch him out.

Gilyard, on the other hand, never worried about his size.

“I pretty much look at it as a blessing. I don’t look at it as an obstacle,” said Gilyard, 18, who lives in the Englewood neighborhood on Chicago’s South Side.

Only two of ESPN’s top 100 high school seniors are under 6 feet. Gilyard is not among them. He’s number 306 on 247sports.com’s list of the top seniors, where only one player is shorter than him.

Simeon’s NBA alumni include Jabari Parker, Derrick Rose, Nick Anderson and Bobby Simmons. In this year’s city championship game, Gilyard tallied 18 points and went 9 for 9 from the free-throw line. He’s now hoping to lead Simeon to its eighth state title, and has committed to UTEP for next season.

inches from the top of their heads to the rim

Big men start salivating as the Five-Nines approach the basket. Then the little guys lift off.

“When I go in,” said Gilyard, whose vertical leap is in the high 30s, “I already have the mindset that I’m gonna either get fouled, I’ma make the layup or if they do close in, I’ma have a kickout. I just go in and finish strong. I jump high enough to finish with contact with bigger players. I can use jump shots, pump fakes to get defenders in the air because you know they want to block smaller guys’ shots.”

Thomas’ vertical was measured at 40 inches at the NBA combine. He missed a dunk in this year’s All-Star Game, but a few days later Instagrammed an off-the-bounce windmill. Gilyard, a ferocious defender, has turned several steals into dunks this season. Keene has a 42-inch vertical, and uses it to launch himself while the bigs are still earthbound to create contact and free throws.

Keene averages 8.0 free throws per game and shoots 82 percent from the line. Thomas shoots 8.9 times per game from the stripe, at 91 percent.

“Just get my body into the big, and be able to finish” said Keene, who put on 15 pounds during his transfer year. He now weighs 175 and can bench-press 245. “Use my size and getting into their body to get up before they get up. Sometimes, it’s difficult if the refs ain’t give me no calls. They’re big down there, but that just comes with a part of the game. I can’t get no taller.”

points per game, which is a whole lot of buckets

Nobody but Thomas would have predicted that he would score like this in the NBA – 29.6 points per game, second in the league. And he owns the fourth quarter.

“I always believed in myself and believed that something like this short height by NBA standards could be a blessing in disguise,” Thomas said.

“I look at it as a blessing. I’ve always been small. I feel like I got the advantage. This might not sound right, but I use my height to my advantage.”

For the Five-Nines, that means handling the ball so low to the floor it’s practically untakable, and using hesitation, change of pace, and, of course, speed to pierce defenses.

“You can’t get up too close on me, because I’m gonna blow by you,” Keene said. “Then the ability to create my shot, you never know when I’m gonna lift up. … I’m not really worried about anybody really taking it from me one-on-one, so I feel confident in my game that I can get to my spots where I want to shoot. I just got to make them.”

Keene exploded into the national consciousness early this season as he surpassed 30 points per game. No D-1 player has broken that barrier for the season since Charles Jones averaged 30.1 for Long Island University-Brooklyn in 1996-97. Keene is now averaging 29.4. He needs to score 79 points over his next two games – the regular-season finale Friday, and the Mid-American Conference (MAC) tournament opener Monday – to reach the magic number.

It could happen. Keene has five 40-point games this season, plus a 50-piece against Miami of Ohio, when he went 10-15 from the 3-point line. But the buckets come tougher now. All the national press and ESPN highlights bring more defensive attention. CMU is 16-14 and mired in a six-game losing streak. In a blowout loss to Eastern Michigan on Feb. 28, Keene was held to 21 mostly garbage-time points as EMU’s coaches constantly hollered about keeping Keene from getting a clean look at the basket.

Still, Keene has already set the single-season scoring record in the MAC, where NBA stalwarts Nate Thurmond, Dan Majerle, Wally Szczerbiak, Bonzi Wells, Gary Trent and Chris Kaman once played. And he sees no reason to change his identity as a scorer to succeed at the next level – not with Thomas opening that lane.

Gilyard is a facilitator, not a scorer. He declined to provide his statistics, insisting that “I don’t really pay attention to it. I’m pretty much of a team personality.” But he believes Keene and Thomas are making his journey easier, “making everybody look at short point guards differently.”

“My goal is to be a pro basketball player,” Gilyard continued. “I just want to have fun, get paid for doing what I love doing and, you know, get paid well. So I think going to the NBA and being one of the best point guards in the NBA, I’m cool with that. I’m not looking forward to being a lottery pick. That’s not destined for everybody.”

is the only way to measure the Five-Nines’ heart

Over the Christmas holiday, UTEP assistant coach Bobby Braswell watched Gilyard play in a tournament in Dallas. “If you talk about those intangibles, it’s his heart, just his competitiveness,” Braswell said. “Anytime they needed a big play, I knew where the basketball was going. Evan was going to make a play for his team.”

“There are certain guys that you just can’t measure that,” Braswell said. “You can’t put a measuring stick to them and then say, ‘OK, he’s going to be good or not.’ ”

That’s how Thomas became an All-Star and joins Calvin Murphy as the best of the shortest in NBA history.

No matter what, Keene will always believe in getting buckets.

Keene does have a confession to make, though. It’s about what the measuring tape says when he stands against it with no sneakers on.