For their newest uniforms, the Miami Heat go Miami ‘Vice’

The team invokes the city’s 1980s style and swagger

The Miami Heat’s creative department pretty much put a key in the ignition of a DeLorean and cued up 1988. That was the year the Heat franchise was founded, the University of Miami Hurricanes football program claimed another national title and two fictional, pastel-suited detectives named Crockett and Tubbs solved crimes on the small screen.

Thirty years later, that golden age of South Beach style and swagger is inspiration for the Heat’s latest court outfit. On Tuesday, the team debuted its appropriately named “Vice” uniform — Miami’s version of the team-unique City Edition ensembles made by Nike in the brand’s first year as the official apparel provider.

But contrary to popular belief, the uniform isn’t directly influenced by the iconic 1980s series Miami Vice, which starred Don Johnson as James “Sonny” Crockett and Philip Michael Thomas as Ricardo “Rico” Tubbs. There’s a greater story that the franchise is telling with the look, particularly through the “Miami” script on the chest of the jersey, which is crafted in the same font and design of the sign that hung on the team’s first venue, Miami Arena, from 1988 to 1999. Although images of the “Vice” jerseys leaked online in late December, when Nike unveiled most of its City Edition looks, the Heat waited until January to roll out its expansive campaign, which includes a microsite that elaborates on the backstory of the design, which the team will wear in 15 games from Jan. 25 to March 8.

The Heat are breaking out the “Vice” uniform on the court for the first time in a home matchup with the Sacramento Kings on Thursday. We spoke with the team’s chief marketing officer Michael McCullough, chief of creative and content Jennifer Alvarez and graphic designer Brett Maurer, who detailed the 18-month process of bringing a taste of Miami Vice to the hardwood. 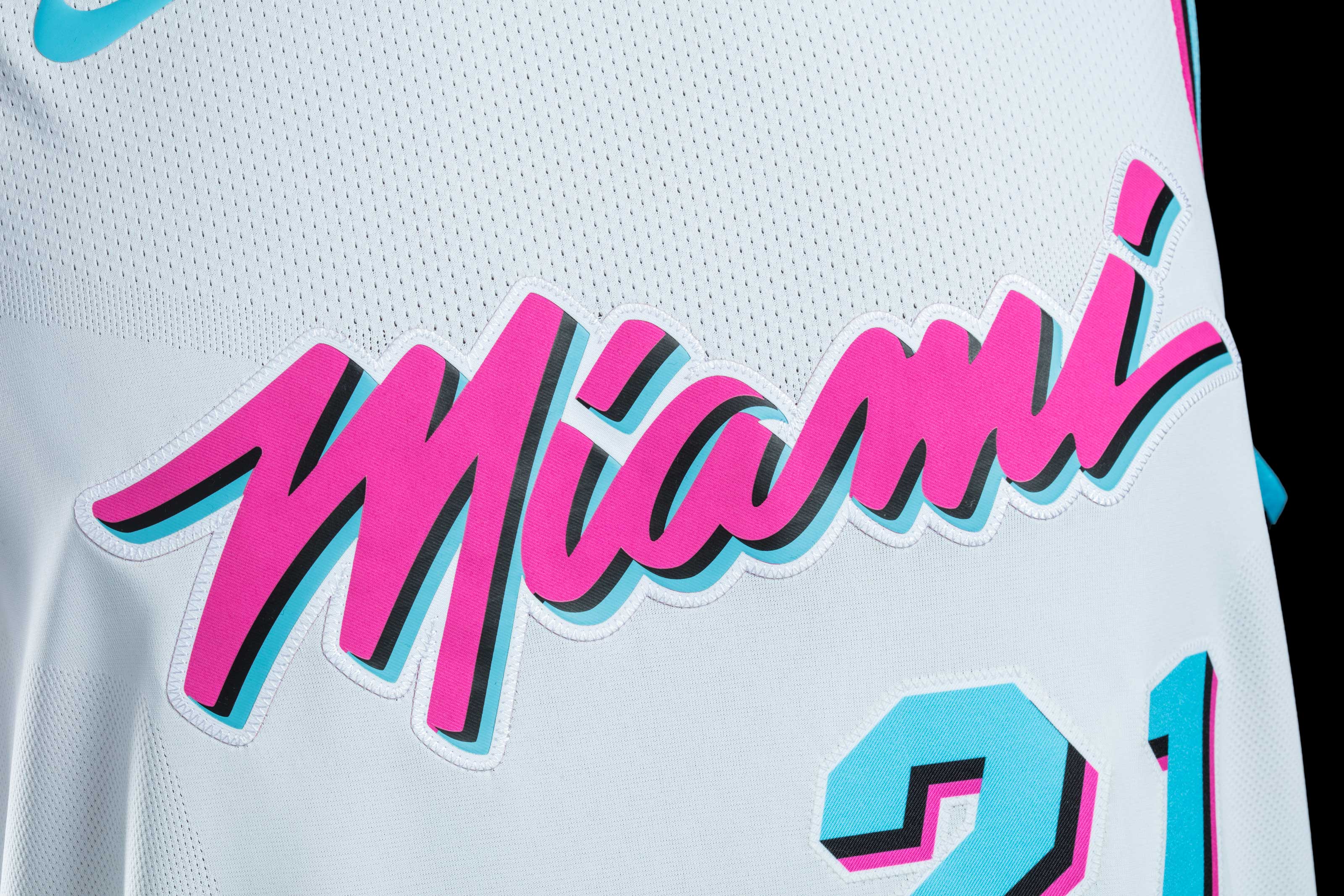 Why was now the right time for this uniform?

McCullough: We’ve been talking about doing this for a number of years. … We’d really kind of filled our dance card with other uniforms that we were executing, from our ‘Back in Black’ to ‘White Hot’ looks. We also had our successful ‘Home Strong’ military uniform. All of these were already in the pipeline, so we were kind of waiting for the next opportunity. When Nike came along with the City Edition, that gave us the perfect opportunity.

How did the ‘Vice’ concept come about?

Alvarez: We wanted to do a jersey that could represent Vice to us. Fans have been hungry for a design like this for years. … We wanted an updated look — something clean and contemporary.

“The name ‘Vice’ isn’t necessarily a nod to the TV program, because Miami has a lot of different things that you might call vices.”

How much of the concept was connected to the Miami Vice TV show?

McCullough: We definitely wanted to make this uniform resonate with folks here in Miami, from the colors … the feel … the nightlife … and the history of the team and the Miami Arena. The name ‘Vice’ isn’t necessarily a nod to the TV program, because Miami has a lot of different things that you might call vices.

Alvarez: By calling it ‘Vice,’ it’s an update to the theme. It’s very representative of the city. There’s a lot of vice here. Miami is a vice to people. It’s a different look.

How does the uniform draw inspiration from the sign of the old Miami Arena?

Maurer: We had everything from Miami art deco to retro digital video game graphics. Over time, we covered the fact that there was a lot that linked all this together. For one, the arena was in these colors. Don Johnson actually introduced the Miami Heat dancers for the first time before tipoff at the first game. It all seemed to just point in one direction. That mark just felt so right for the chest.

Alvarez: There were gradients and things that would tie into a specific era. We found our way to the Miami Arena mark. We … knew we could really bring it home by incorporating the Miami Arena, because that celebrates who we were and who we are. That pays homage to everyone who’s been here since the beginning. Once that mark was dropped into Brett’s silhouette, we knew it was it. It felt like it was an instant classic … but contemporary.

McCullough: While it’s a brand-new uniform, and brand-new relationship with Nike, it also had classic elements that aren’t forced. We weren’t stretching anything to make this uniform work. It was gonna work because of the mark from the Miami Arena. That cemented this as an authentic Heat fan-driven uniform.

What was it like seeing the final product for the first time?

Maurer: Getting that first sample in, it’s hard to put words around it.

McCullough: When that box came from the NBA, I took it and went out to the design area. I told everybody, ‘OK, guys, this is it … we’re gonna unbox this together.’ I made Brett pull it out of the box because this was his baby. When that uniform came out of the box, people just erupted. I was super happy. That was a really cool moment in the process, when the person who designed the uniform got to take it out and own the moment.

Take us through the moment the players saw the uniform for the first time.

McCullough: When we shot the player introduction video, in their changing room, the uniform was hanging up. We actually recorded their reactions when they were coming in. The guys loved it. They couldn’t wait to wear it … and we had to take their phones from them because we knew the first thing they would do is post it on social media.

Alvarez: We had players asking us for the official Nike colors of the jersey because they wanted to get back to their teams and have custom shoes to match the uniform, with the exact colors.

How did you land on blue and pink, which is such a departure from the team’s current colors?

Alvarez: That’s exactly why. We wanted to make a splash. It is a departure for us, but there’s still classic 1988 Miami Heat jersey in it because we kept the numerals the same, and the striping down one side. So if you look at what our 1988 uniform is, and this City Edition, they definitely complement each other. It was just kind of playing with the colorways and landing on the official Nike colors, which was a little bit of a back-and-forth. … Nike literally sent us a box full of colors, and we went through cards one by one and landed on two, which are laser fuchsia and blue gale. Those are the official ‘Vice’ colors for the jersey.

Did Pat Riley have a role in the design process, and what was his reaction when he first saw it?

“Laser fuchsia and blue gale. Those are the official ‘Vice’ colors for the jersey.”

McCullough: Pat was involved in the approval process, which is probably bigger than the design process. I can tell you that he dug it right from the start. … He was, and has been, a big supporter of the uniform concept from the very beginning. We got his stamp of approval right away.

What’s been the reception to the uniform?

Alvarez: People are so excited. … We enjoyed that everyone was debating whether or not it was real. We let people get excited about it on their own, because we knew what was coming and wanted to be really thoughtful with the rollout. It took years to put together this type of uniform, and we wanted to do it right.

How does the ‘Vice’ uniform embody both the franchise and city?

McCullough: It’s badass. There’s a lot of things you can say about Miami, good and bad, but there’s a reason why it’s one of the biggest tourist destinations in the world. People want to come here, and they want to experience all it has to offer. It’s a city that has a lot of sheen and a lot of glitz, but it also has a little grit under its fingernails. We feel like that embodies the Miami Heat as well. We’ve earned our way to three championships. We have Pat Riley and Erik Spoelstra at the head of it. But when you break a Miami Heat team down, it’s about being the hardest working, nastiest, meanest, toughest, most respected but most disliked team in the NBA. And this uniform really captures that badass vibe that Miami has to offer.

Have Don Johnson and Philip Michael Thomas seen it yet?

McCullough: I’m not sure if they follow us on social media. But if they haven’t, I’m sure they will.