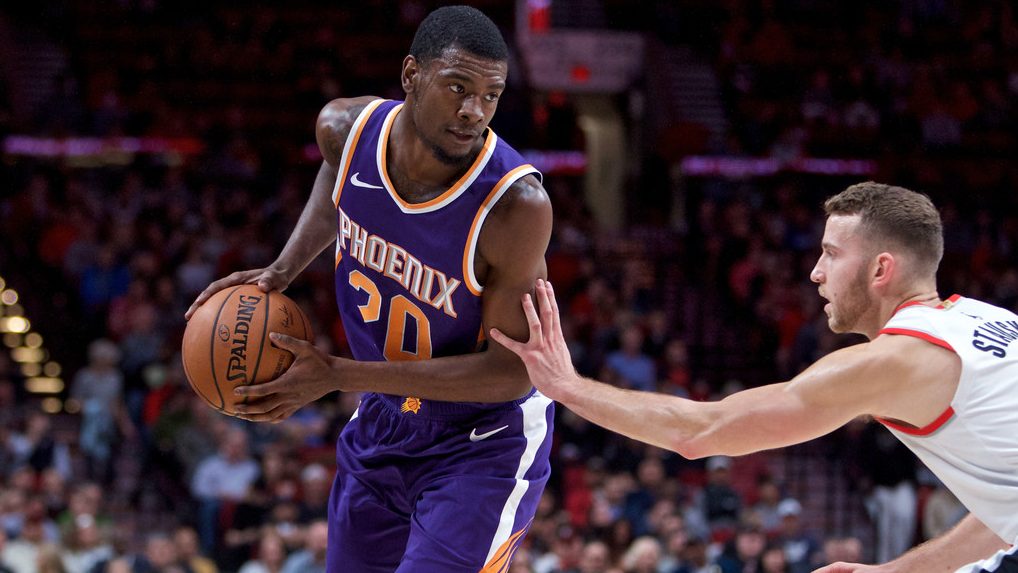 Suns’ Josh Jackson Diary: ‘I am not going to lie. I threw a water bottle.’

The following is Part III. (Read the first and second entries.)

I was not watching the game when the Lakers and Rockets fought, but I did see the highlights. I thought it was a little crazy. I thought the suspensions were about right. I haven’t seen nothing like that since [2004], ‘The Malice at the Palace.’

I was 8 years old. I was kind of sitting right at midcourt about 20 rows up. I remember seeing so many people everywhere fighting. I remember [then-Indiana Pacers forward] Jermaine O’Neal getting hit with a chair. That was one of my most vivid memories. I remember Ron Artest laying on the scorer’s table and someone throwing a drink on him.

I was looking around and everyone was throwing something onto the court. I am not going to lie. I threw a water bottle. Why? It’s my home team. I’m a Pistons fan. What? The Pacers came in here throwing punches on my favorite players. I couldn’t have that. But that is neither here nor there.

I didn’t know what to think or what to do. My parents were protecting me, standing over me. There was nothing we could really do. I wasn’t scared. I didn’t feel like anyone was going to attack me.

We didn’t leave until after Jermaine O’Neal was hit with the chair. Things were pretty calm after that. They got it under control. At the time, I didn’t realize how big of a deal it was. A few days later, I saw the suspension and how much everybody got fined. That was when I was like, ‘This is crazy.’

ON GROWING UP A PISTONS FAN …

Ever since Day One, that’s all I’ve wanted to do. I’ve been making moves and looking towards doing that.

I am not going to lie. I threw a water bottle. … The Pacers came in here throwing punches on my favorite players. I couldn’t have that.

We used to have season tickets and go to all the games when the Pistons were really, really good. I used to be their ball boy sometimes. I was a ball boy five or six times. My favorite time was my 10th birthday, Feb. 10, 2005. Apparently, my dad was really good friends with the trainers.

I got to meet [Pistons guard] Rip [Hamilton], who I talk to now here and there. I keep up with Rip through Instagram. The best advice he has given me is to be myself and come out and play my game. There were a lot of times last season where he thought I was coming out being a little nervous or a little timid. Just do what got me here.

On facing LeBron and the lakers …

It was a smart decision by LeBron [James]. He’s made a lot of good moves for him and his family. He put him in a situation where he is pretty much taken care of for life. He’s on a great team. I was not surprised he signed there. I was more surprised that no other superstar went over there with him.

It’s tough to guard him. You always got to pay attention to him whether he has the ball or not. You got to do your work early. I think a lot of guys get relaxed because they see him coming up the floor, and then ‘boom.’ He is just so quick. In a blink of an eye he is at the basket.

I remember playing him for the first time last season and thinking, ‘He’s strong.’ Every time I guarded him I felt that I had pretty solid position. Then he would get one little half step on me and I was on the side of his body. And then it was over from there.