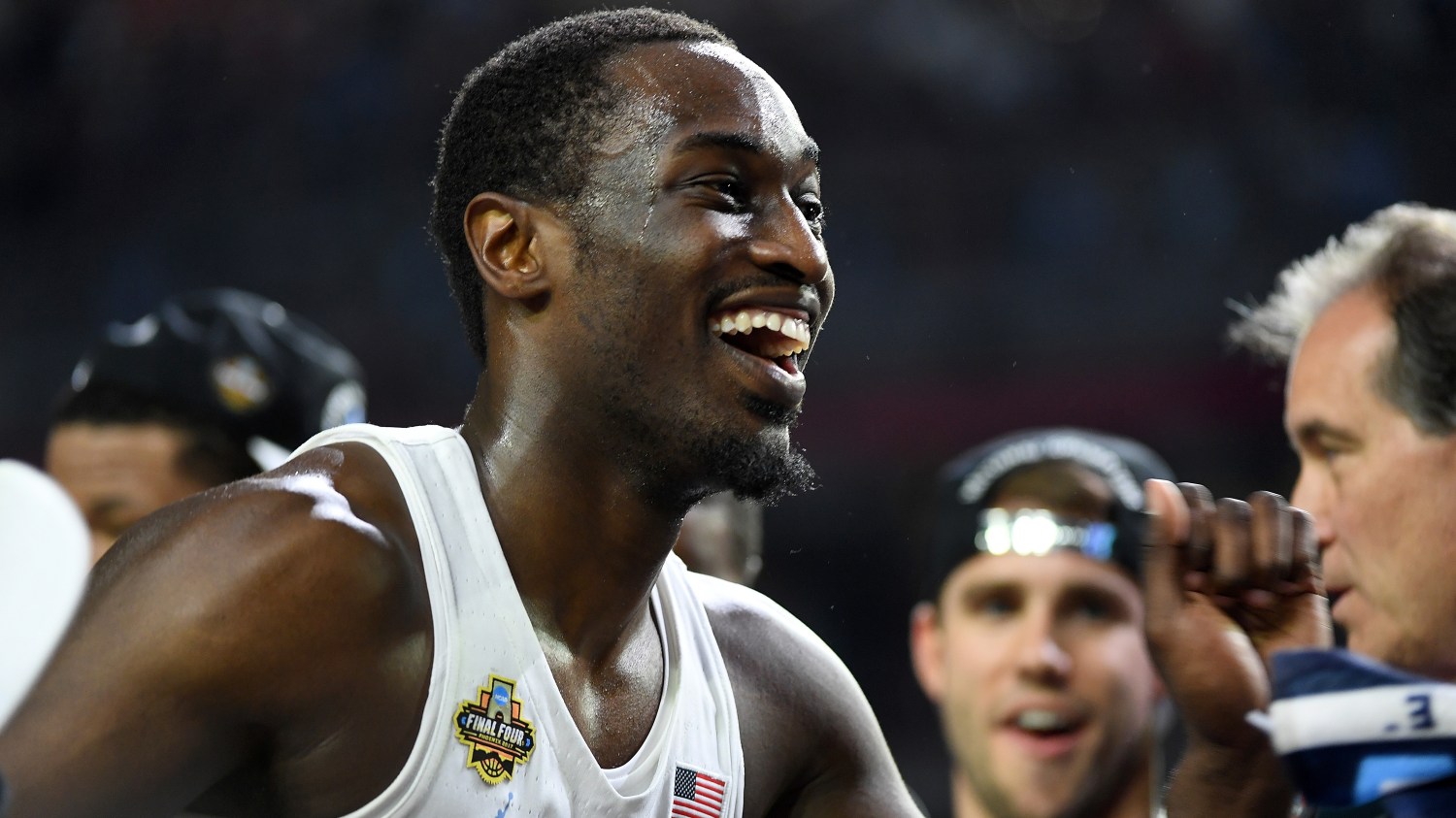 As the University of North Carolina’s men’s basketball team began celebrating its 2017 NCAA championship on an elevated hardwood floor, Theo Pinson was temporarily down below enjoying long-awaited tears of joy with his equally emotional parents near the stands.

“I just told them I loved them and [reminded] them that I told them we were going to win,” Pinson said after North Carolina’s 71-65 win over Gonzaga on Monday night.

The road to becoming a “Tar Heels champion for life” was a painful one for Pinson.

Pinson earned third-team USA Today All-America honors as a senior in 2014 while playing for Wesleyan Christian Academy in High Point, North Carolina. The 6-foot-6 guard played in the top three prep All-Star games his senior year: the McDonald’s All-American Game, the Nike Hoop Summit and the Jordan Brand Classic. The Mr. Basketball of North Carolina was ranked as the 10th best high school player in the Class of 2014. He signed with the Tar Heels over Duke, Indiana, Georgetown and Louisville.

“One of the reasons why he came to Carolina is because he loves that family love,” Pinson Sr. said.

Lost in the hoopla of Pinson’s high school career was that he also broke the fifth metatarsal bone in his left foot. The foot problems continued in Chapel Hill, North Carolina, as he missed 14 games as a freshman after breaking that same bone in his left foot on Jan. 21, 2015, at Wake Forest, and he didn’t play in the 2015 Atlantic Coast Conference tournament after aggravating it. He was injury-free in a sophomore season in which he averaged 4.5 points, 3.2 rebounds and 2.9 assists per game. The foot woes returned last October, and this time it was the right foot, as Pinson broke the fifth metatarsal bone and missed the first 16 games of the 2016-17 season.

Pinson made his season debut on Jan. 8, going scoreless with five rebounds and five assists against North Carolina State. He averaged 6.2 points, 5.2 rebounds and 3.3 assists in six games before reinjuring his right foot on Jan. 26 against Virginia Tech.

“The second time I got hurt I didn’t know if I was going to play the rest of the season,” Pinson said. “I called [my parents] and was like, ‘I hope I can compete with this team because I know we can win a national championship.’ I didn’t want to let them down. I knew I could help out. They told me to ‘just stay positive. You don’t know what the results are …’ They kept my head up, and look at me now.”

Pinson Sr. described that time as “rock bottom” because they didn’t know how bad the injury was initially. He gave some motivational words and tough love daily to push his son.

“It’s amazing to throw the ball up in the air. That’s it. There is nothing else better than that, I promise you,” Pinson said.

“It was tough, man. It was just another injury,” Pinson Sr. said. “He said, ‘I can’t do it no more. I’ve been through this three times already.’ He said, ‘I need help getting through this one.’ I would be on the phone telling him to ‘man up. We’re going to get through it.’ I asked God to help us get through it. We went through it together.”

Along with his parents’ daily support, Pinson said, he fought through his injuries with toughness, weightlifting and a great Tar Heels athletic training staff. He returned from injury against Duke on Feb. 9 and did not miss a game the rest of the season.

With a reputation as an energy guy who makes others better, Pinson started at forward for North Carolina in the championship game Monday night.

“I’ve got to give them more credit than anybody for getting me back out there and keeping me healthy,” Pinson said.

As bad as the foot pain was, Pinson suffered the worst pain of his college basketball career when the Tar Heels lost in the 2016 NCAA championship game to Villanova in nightmarish fashion.

With Pinson watching helplessly from the bench, Villanova guard Kris Jenkins made a game-winning shot at the buzzer to keep the Tar Heels from winning their first championship since 2009. This was after North Carolina guard Marcus Paige hit a 3-pointer to tie the game at 74 with 4.7 seconds remaining. Pinson recalled Villanova’s championship confetti falling on him as he departed from the floor in defeat. There was also a picture of him sitting in the locker room afterward with his head down that he used as a screen saver on his cellphone as a motivating reminder of the devastating loss.

“I don’t remember nothing right now,” Pinson said of the 2016 NCAA championship game.

Gonzaga entered Monday’s game with a 37-1 record and quite capable of giving North Carolina a second consecutive title-game defeat. Before heading to the championship game, Pinson took a phone call from his parents, who offered words of wisdom and good luck.

“I told him before the game, ‘Win or lose, son, I’m proud of you because you’ve carried yourself respectable as a man. You’ve upheld the university and all this good stuff. I’m proud of you, son. Go and enjoy,’” Pinson Sr. said.

Pinson also had some words for his parents before he got off the phone.

“They told me that no matter what, stay positive and keep your head up,” he said. “I told them, ‘Don’t worry about it. We’re going to win some games.’ ”

The Bulldogs entered halftime with a 35-32 lead and the momentum. Pinson said North Carolina coach Roy Williams told the players at halftime that if they “want to be a champion, it’s going to be a dogfight.” The Tar Heels responded to their coach by outscoring the Bulldogs 39-30 in the second half. North Carolina made the necessary defensive plays down the stretch during the foul-plagued game to claim redemption. Pinson described the title game as “ugly” and par for the course for how the Tar Heels won en route to their title.

As the clock started ticking down, Pinson started crying tears of joy after he saw Gonzaga guard Nigel Williams-Goss shed tears of pain. And once the buzzer finally sounded, Pinson tossed the ball high into the air in the mammoth University of Phoenix Stadium in celebration.

“It’s amazing to throw the ball up in the air. That’s it. There is nothing else better than that, I promise you,” Pinson said.

Pinson had six points, nine rebounds, two assists, one steal and one block in 30 minutes. The communication major also was much-needed comic relief for his Tar Heels teammates before the game.

“He’s the energy buzzer,” North Carolina assistant coach Steve Robinson told The Undefeated. “All day today I felt that he was trying to keep everybody loose on purpose, from this morning at breakfast. He has this voice about him that everybody loves. When you come up here, he brings a smile to your face.

“The injuries have been unfortunate for him. But he’s bounced back and we’ve finally been able to keep him on the court. I still don’t think we’ve seen the best of Theo Pinson as a player yet, but we’ll keep working and try to get him there.”

The Tar Heels won the sixth national title for the University of North Carolina. The new banner will join the others before next season in the rafters of the Dean Smith Center after an eight-year drought. Pinson, a North Carolina native, knows just how special it is to be in that rare championship class for the storied program.

“All the former guys were saying, ‘Just pull up a chair to the table,’ ” Pinson said. “We wanted to pull up a chair. I told [ex-Tar Heels forward] Sean May to clean my chair off and have it ready for me when I come to the table.”

Pinson’s mom filmed a precious moment on her iPad between father and son. Both wearing North Carolina No. 1 jerseys with the name Pinson printed on the back, they cried and hugged while the champion kept hitting his fist on his dad’s back and told him twice, “I told you we were going to win.” As his son ran back onto the floor to celebrate with his teammates, Pinson Sr. held his right fist in the air in a much-needed celebration after so much disappointment.

Pinson said he will “never forget” the feeling of embracing his dad after winning a championship. Neither will his pops.

“That showed me the love he has,” Pinson Sr. said. “He knows that I’m here, his mom is here and his family is here. … This is one of the biggest moments of our lives, for him though, not me. Son, you don’t have to do anything for me. I’m already happy.”