How Brooklyn’s rising star took matters into his own hands

Each story holds special meaning to Dinwiddie. And each story is being featured on his sneaker line, K8IROS (which, according to Dinwiddie, means the convergence of optimal timing and maximum effort), that launched in December.

In a sneaker-crazed era dominated by brand heavyweights, Dinwiddie has released one of the most talked-about basketball shoes you’ve never heard of. A contradiction, yes, but while you’ve probably seen Dinwiddie’s shoes on various “top kicks of the week” lists, it’s likely you didn’t know much about K8IROS.

Before you tell Dinwiddie that backup point guards can’t sell shoes, just consider the odds he’s overcome to get in this position: a devastating ACL injury in college that dropped him in the draft, two NBA teams that gave up on him and numerous stretches in the G League that had him contemplating playing professionally overseas.

Yet look where he is now: Dinwiddie signed a three-year, $34 million extension in December, making him one of the best bargains in basketball on a Brooklyn Nets team that’s one of the biggest surprises in the league (sixth in the Eastern Conference). He was arguably the best player on the Nets for the first two months of the season and had the most productive month of his career in December when he averaged 20 points.

Up until a late-January thumb injury forced him to miss 14 games (the Nets were 6-8 in that stretch), Dinwiddie was the most clutch player in the NBA this season: his six game-tying/go-ahead fields goals with less than a minute remaining in the fourth quarter and overtime were the best in the league (even missing 14 games, he currently ranks second). He has 13 of those shots since the start of the 2017-18 season (along with Damian Lillard), which ranks just behind Russell Westbrook (14).

And Dinwiddie is doing his damage off the bench.

“Some guys relax after getting a new deal, but Spencer has played better since he signed,” said Nets coach Kenny Atkinson. “I think he’s still on a mission to prove something in this league.”

Ask Dinwiddie, who is averaging 18.4 points since the return from his injury, what drives him on his mission and he’ll share with you his motto, which is the line Bruce Banner shouts in the first Avengers movie as he morphs into the Incredible Hulk.

Anger directed Dinwiddie into the sneaker game when, upon his arrival to play for the Nets, no shoe brand wanted to touch him.

And anger drives him to prove himself daily, especially against the two teams, Detroit and Chicago, that gave up on Dinwiddie without giving him much of a chance.

That anger was on full display against the Detroit Pistons on the opening night of the season, when Dinwiddie hit a 3-pointer to tie the game in regulation and another 3-pointer to win the game in the final seconds. It was his second game-winning shot against the Pistons in the past two seasons, which led to this observation from Pistons center Andre Drummond: “He has a personal vendetta every time we play him.”

Asked about Drummond’s comment, Dinwiddie, whose name and youthful appearance come off as scholarly and noncombative, nods.

“My basketball disposition, in general, is somewhat angry,” Dinwiddie said. “With the road I’ve traveled, and with how hard it’s been to get here, there’s a certain amount of anger and fire that creates.”

He was rejected by the high school he wanted to attend, settling for the school whose basketball team was coached by his next-door neighbor.

“They couldn’t see his potential,” said Derrick Taylor, Dinwiddie’s basketball coach at Taft High School in Woodland Hills, California. “I said to myself, ‘I don’t know how big he’s gonna be, but he sure as hell is a natural basketball player.’ ”

Dinwiddie arrived at Taft as a 5-foot-9-inch, 108-pound freshman. By his junior season, Dinwiddie had grown to 6 feet, 3 inches and was beginning to make a huge impact on games. “Physically,” Taylor said, “he caught up to where he had always been mentally and intellectually.”

Dinwiddie had the ability to dominate games in various ways, which is what intrigued Colorado coach Tad Boyle when he saw him at a summer AAU tournament in Las Vegas.

“First game I see him, he scores 25,” Boyle said. “The next game he doesn’t score a point, takes maybe one shot, and totally dominates. I’ve watched a lot of AAU championships, and the only time I can remember which team won was because of Spencer.”

Dinwiddie picked Colorado over Harvard and averaged 10 points as a freshman during the 2011-12 season to help the Buffaloes (along with current Oklahoma City Thunder guard André Roberson) reach the NCAA tournament for the first time in nine years.

Entering his junior year, Dinwiddie was one of 50 candidates for the John R. Wooden Award. Two months into the season, he led Colorado in scoring and assists, and the team was ranked 15th in the country. But then his season ended abruptly. While pushing the ball upcourt in a January game against Washington, Dinwiddie crumpled to the ground. He tore his ACL, lateral meniscus, medial meniscus and MCL.

“I felt devastated,” he said.

Most players would have rehabbed and returned to school for a senior season to show NBA teams they had completely recovered. But not Dinwiddie.

“I walk in the room and Spencer has every NBA roster laid out around his bed,” Boyle said. “He was studying rosters and guaranteed spots and which teams had free agents.”

Boyle went back to campus with grim news for his staff. “Spencer’s not coming back,” he told them.

Dinwiddie came to that decision when his mother, Stephanie Dinwiddie (a former professor at USC), discovered him crying in the bed during his recovery. She asked him what he really wanted to do, and his response was to enter the draft.

“Then do it,” she told him, in what Dinwiddie describes as the most important advice he’s ever received in his life.

Five months removed from surgery, Dinwiddie attended the 2014 NBA draft combine in Chicago with his confidence still intact. During media interviews, he compared his versatility to Penny Hardaway’s and Shaun Livingston’s and his offensive game to James Harden’s. “You talk about playmaking and shooting,” Dinwiddie said of his skills, “it’s a rare package.”

Detroit selected Dinwiddie in the second round (38th pick), but a roster full of guards (Reggie Jackson, Brandon Jennings, D.J. Augustin) resulted in limited opportunities and numerous trips to the G League.

The Pistons gave up on Dinwiddie after two seasons, trading him to Chicago in June 2016 for a guy, Cameron Bairstow, whose name you’ll likely forget by the next paragraph.

Suddenly, his career was at a crossroad as he decided between guaranteed money being offered overseas or the G League path back to the NBA.

“I just didn’t believe that was how my story was supposed to end,” Dinwiddie said. “I knew I was an NBA player.”

He signed a contract with the Windy City Bulls and found a coach, Nate Loenser, who believed in him.

“He wasn’t excited being there,” said Loenser, now an assistant coach with the Bulls. “I let him know I was putting the ball in his hands. I told him I didn’t need 30 [points] every night, I wanted him striving for triple-doubles.”

Loenser hoped the two wouldn’t be together long. He got his wish: That December, the Nets, a team plagued by backcourt injuries, signed Dinwiddie for the remainder of the 2016-17 season.

Dinwiddie had found a home in Brooklyn.

At the end of a December practice this season, Dinwiddie, wearing a black Nets hoodie, made his way toward the window of the team’s practice facility, where an oversized duffel bag sat on the ledge. He began to pick through perhaps a dozen colorful sneakers, each of the size 13s brightened with the artwork of Troy “Kickasso” Cole, the custom designer who has sketched many of the shoes worn by NFL stars during the My Cause, My Cleats campaign.

While Dinwiddie has worn his K8IROS shoes since the start of the season, he officially launched the brand on Dec. 8.

On opening night in Detroit, Dinwiddie wore a shoe with the likeness of Rosa Parks, honoring the late iconic civil rights figure in the city where she moved after her pivotal role in the Montgomery bus boycott in Alabama.

“We came up with a hundred things that we thought were important to me and to our history and culture,” Dinwiddie said. “Many of the ideas are actually centered around black history because I wanted something that our youth could possibly learn from.”

While many of the designs are rooted in black culture, others are tied to Dinwiddie’s personal likes, such as the customs that paid tribute to the late Bryce Dejean-Jones, the former New Orleans Pelicans forward who was his teammate in high school; and the Black Panther-inspired shoes to recognize one of his favorite superheroes (Game 36). Some of the designs are also done on the fly, including the Stan Lee-inspired shoes Dinwiddie wore shortly after the Marvel creator’s death (Game 15). 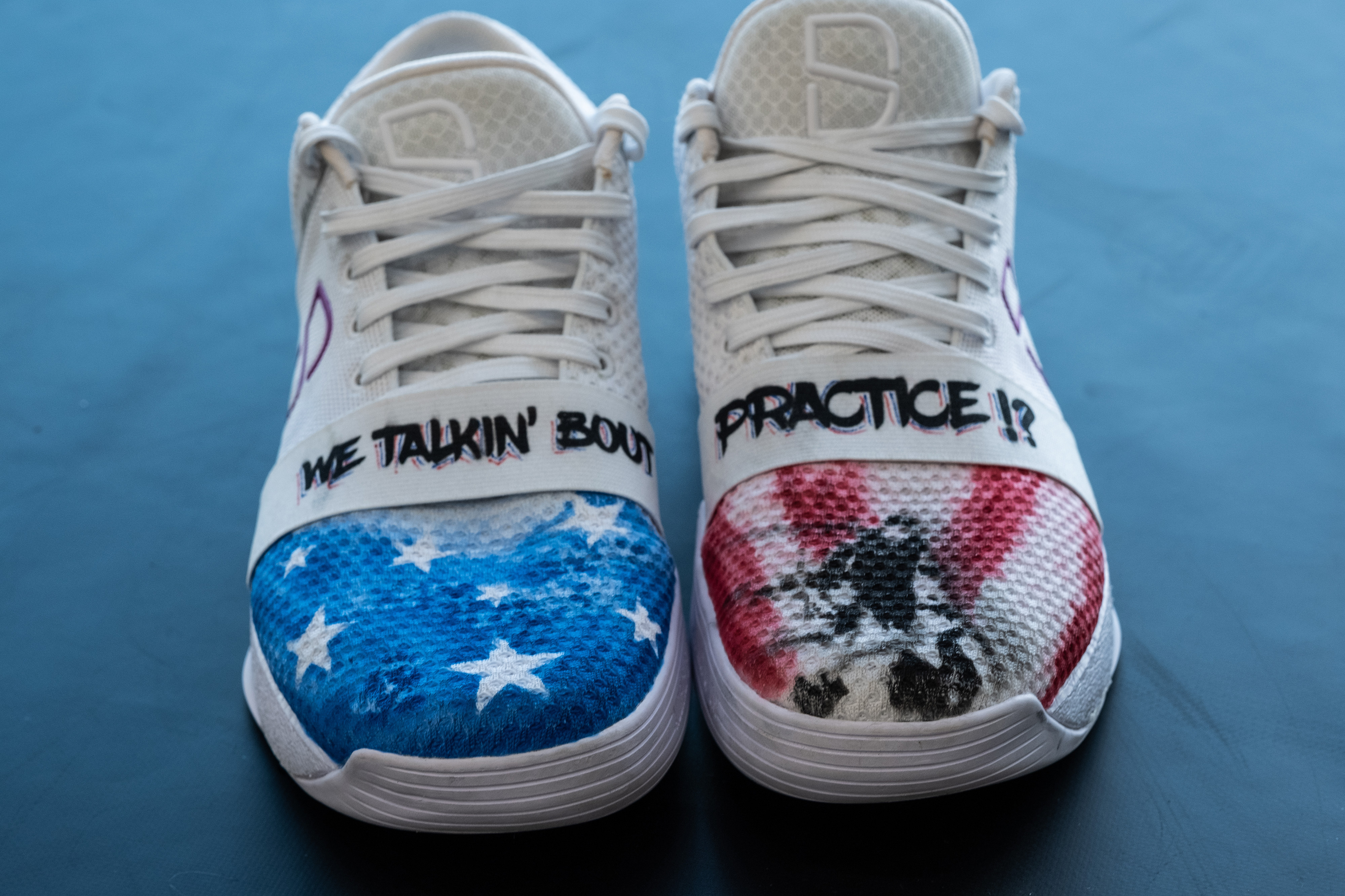 The Allen Iverson custom, a tribute to the player who Dinwiddie says is “arguably pound for pound the best to ever do it.” 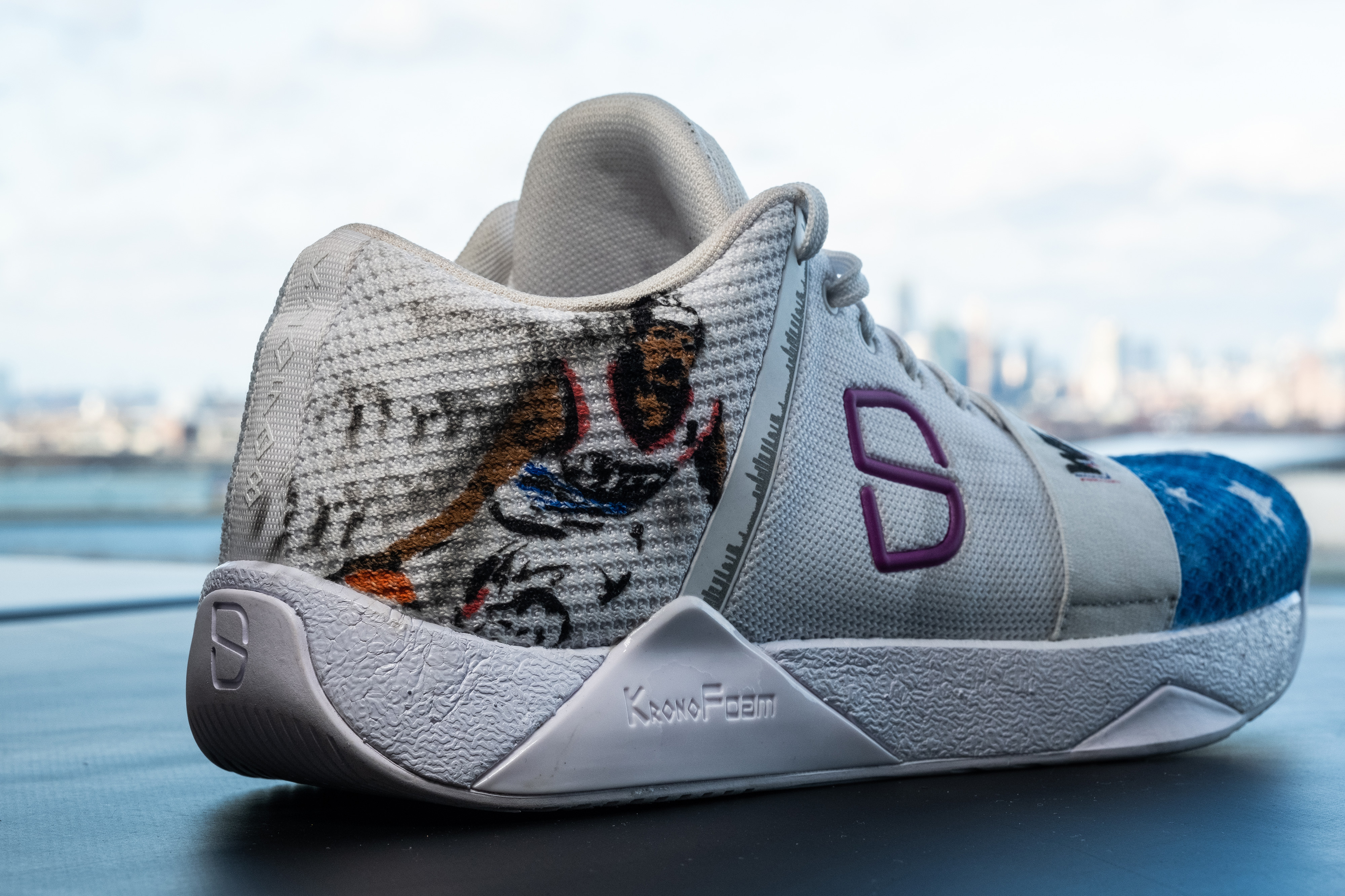 Side view of the Allen Iverson custom. 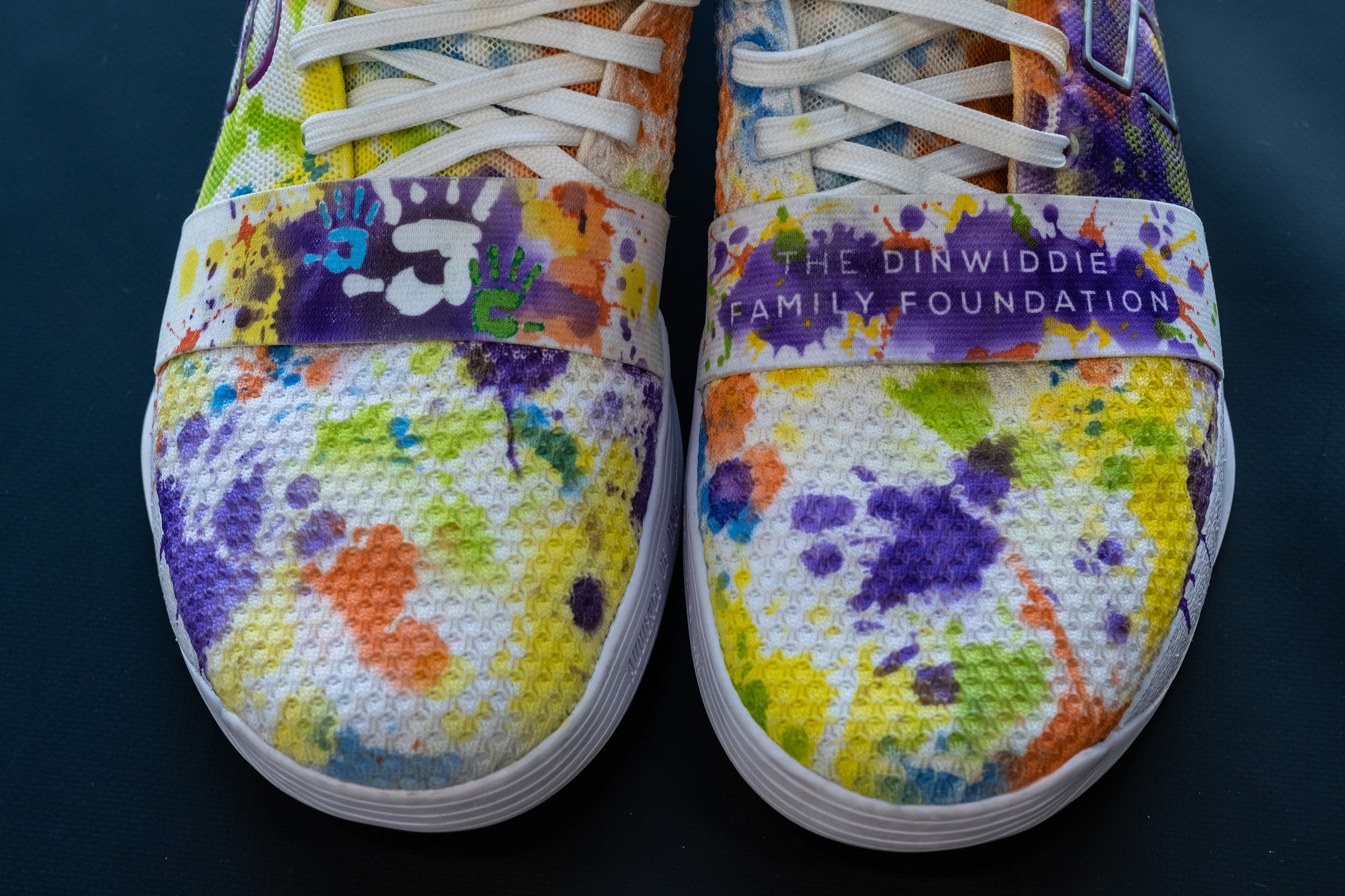 Top of the Dinwiddie Foundation customs. 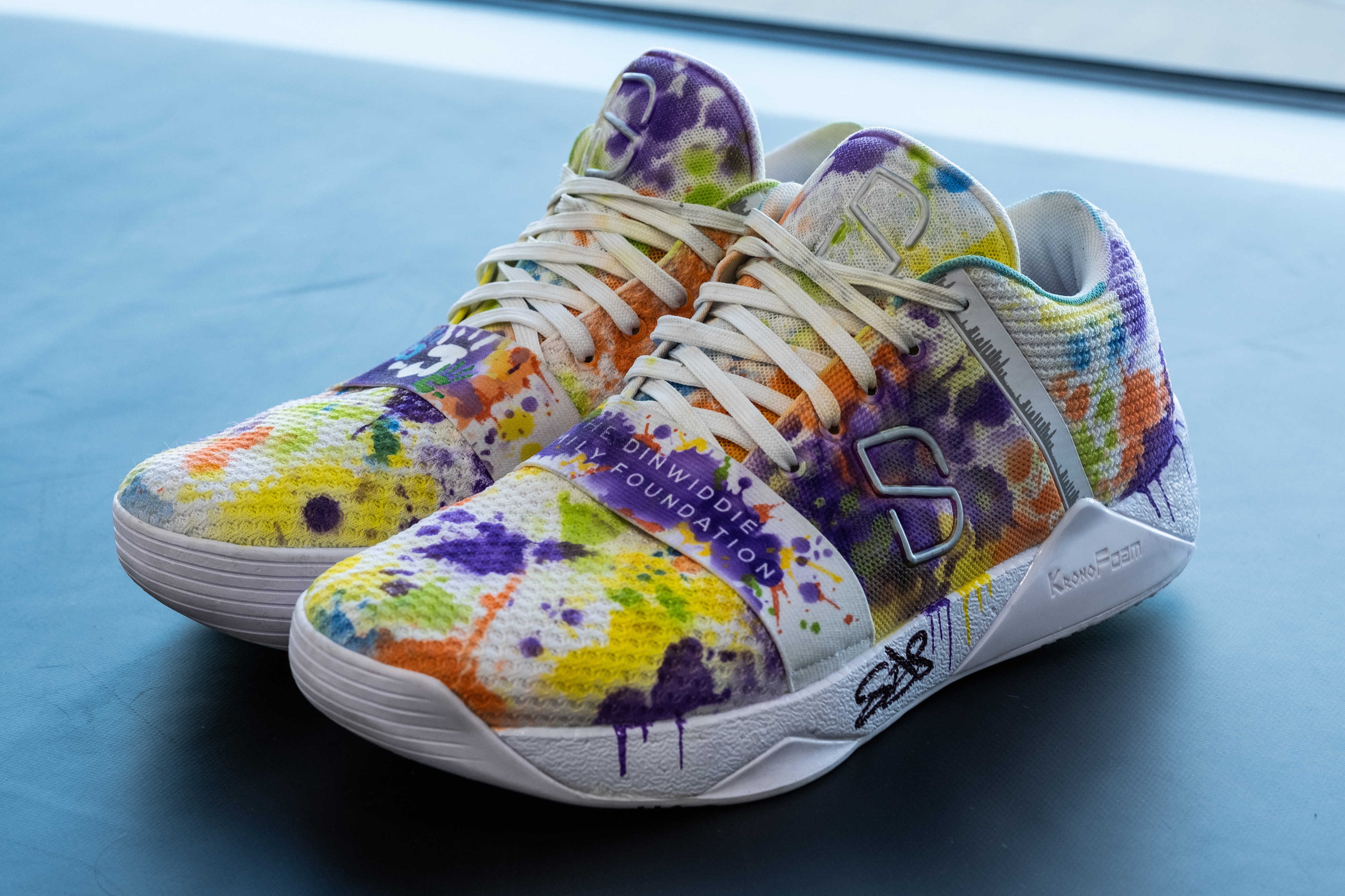 Side view of the Dinwiddie Family Foundation customs. 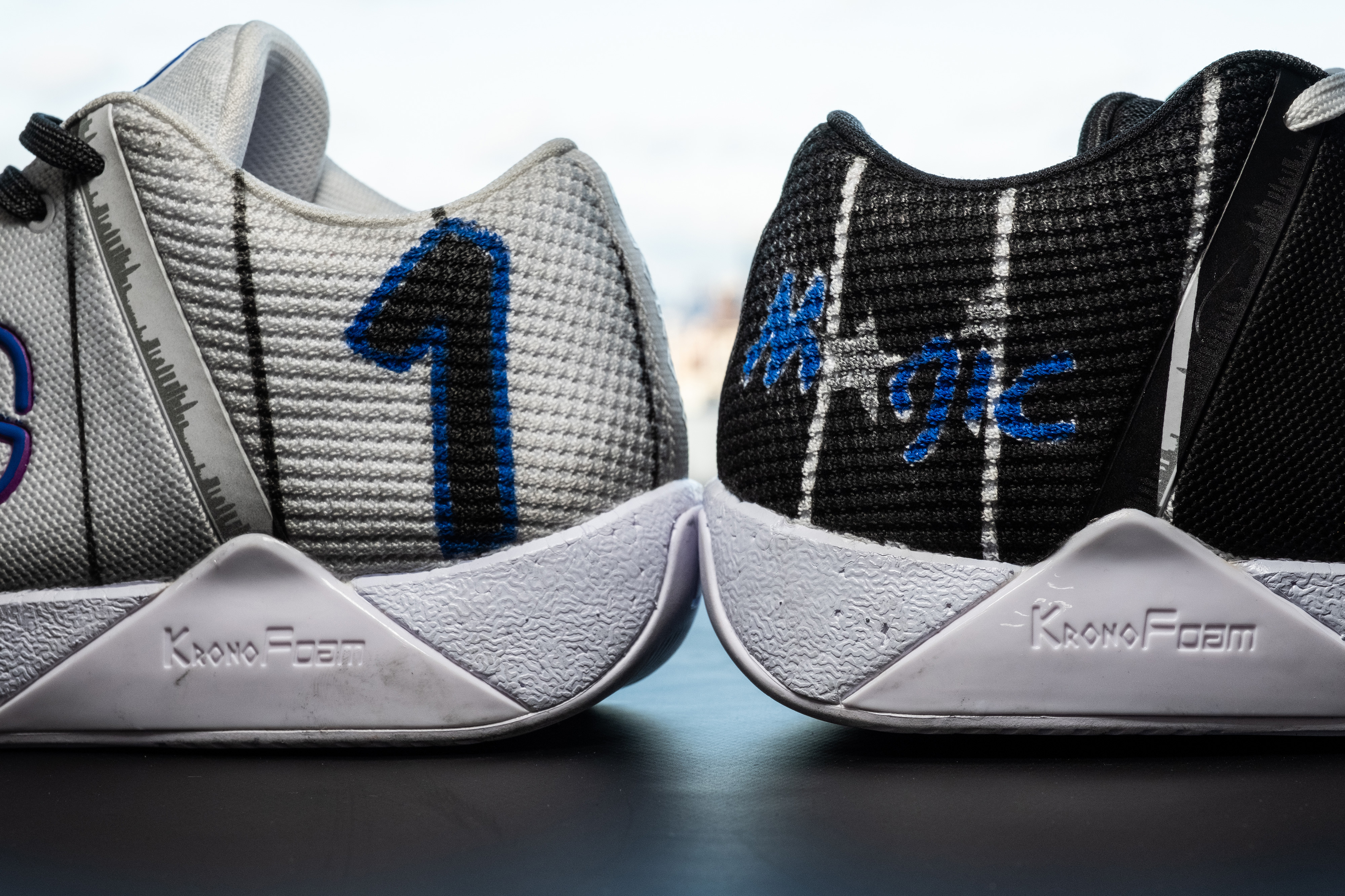 The Penny Hardaway custom, in tribute to one of the point guards Dinwiddie looked up to. 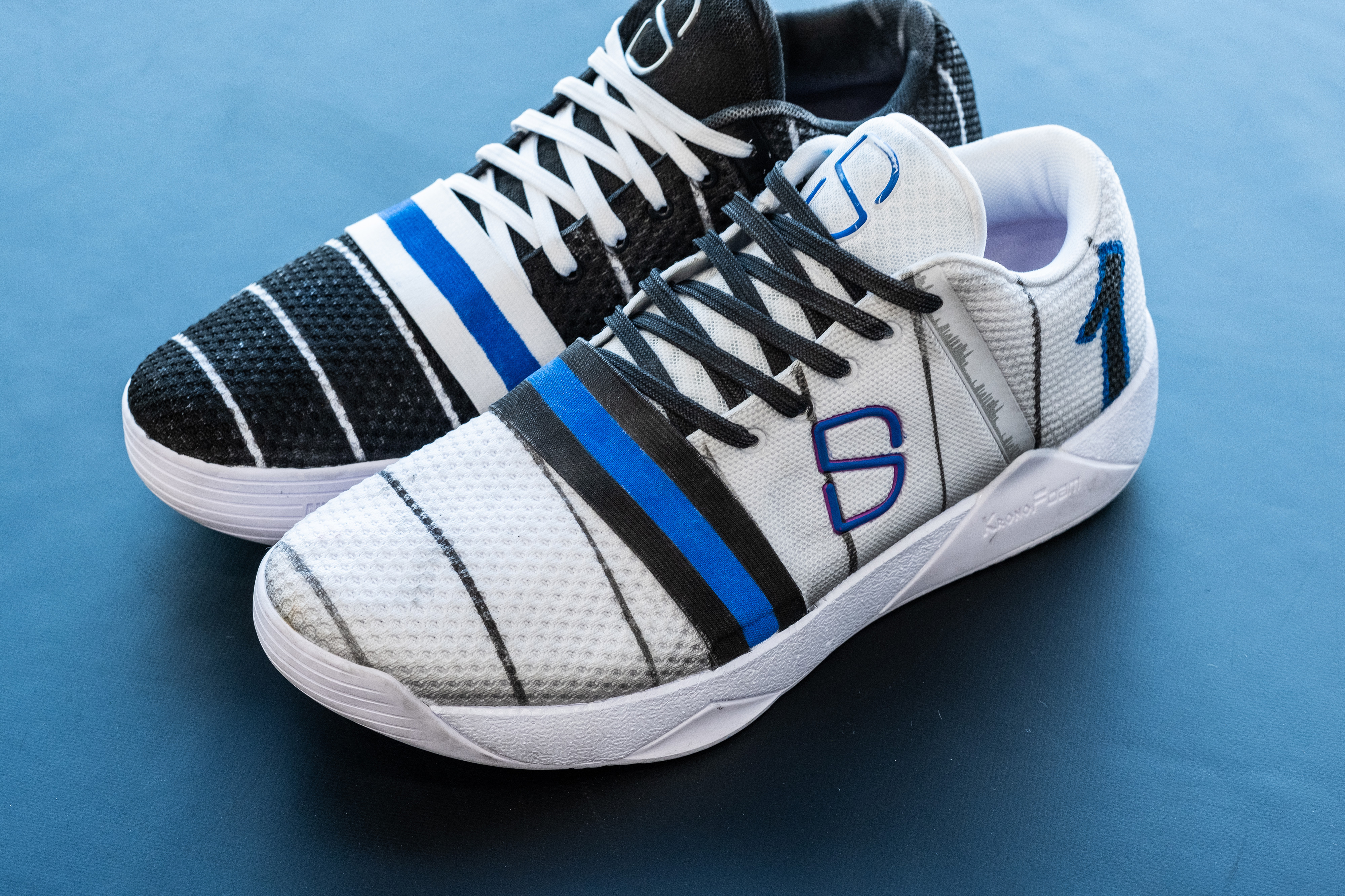 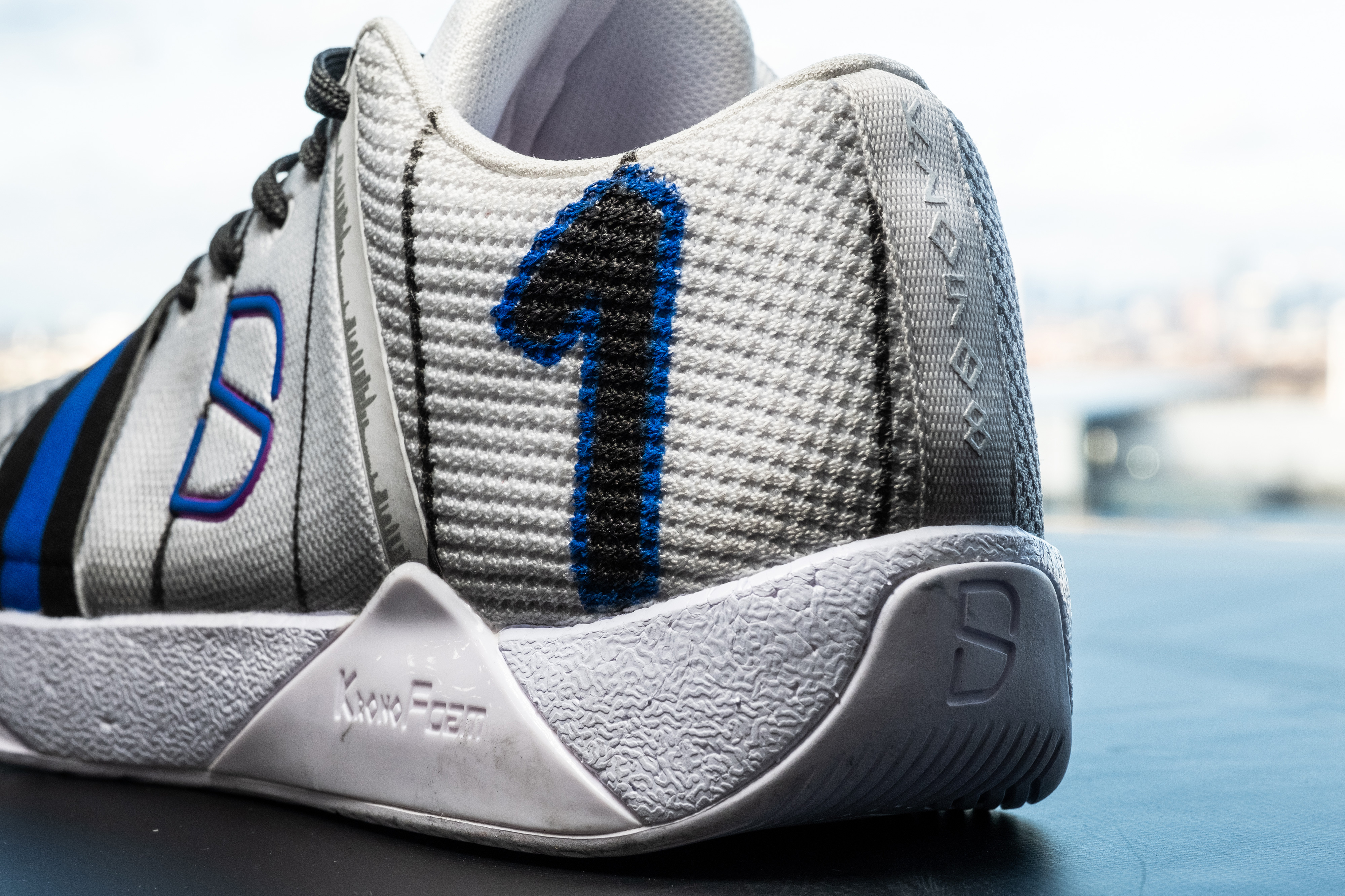 Detail of the Penny Hardaway custom. 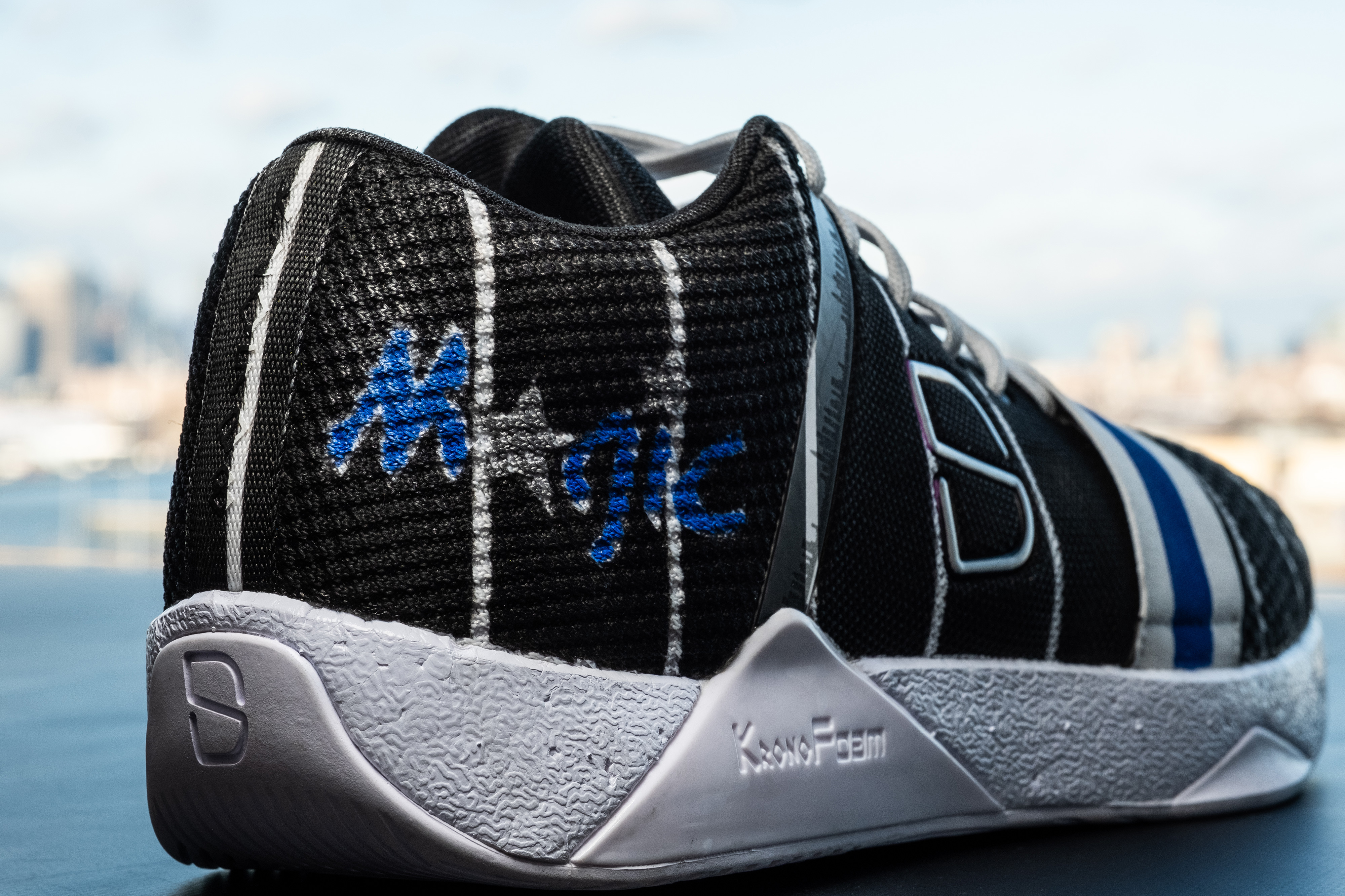 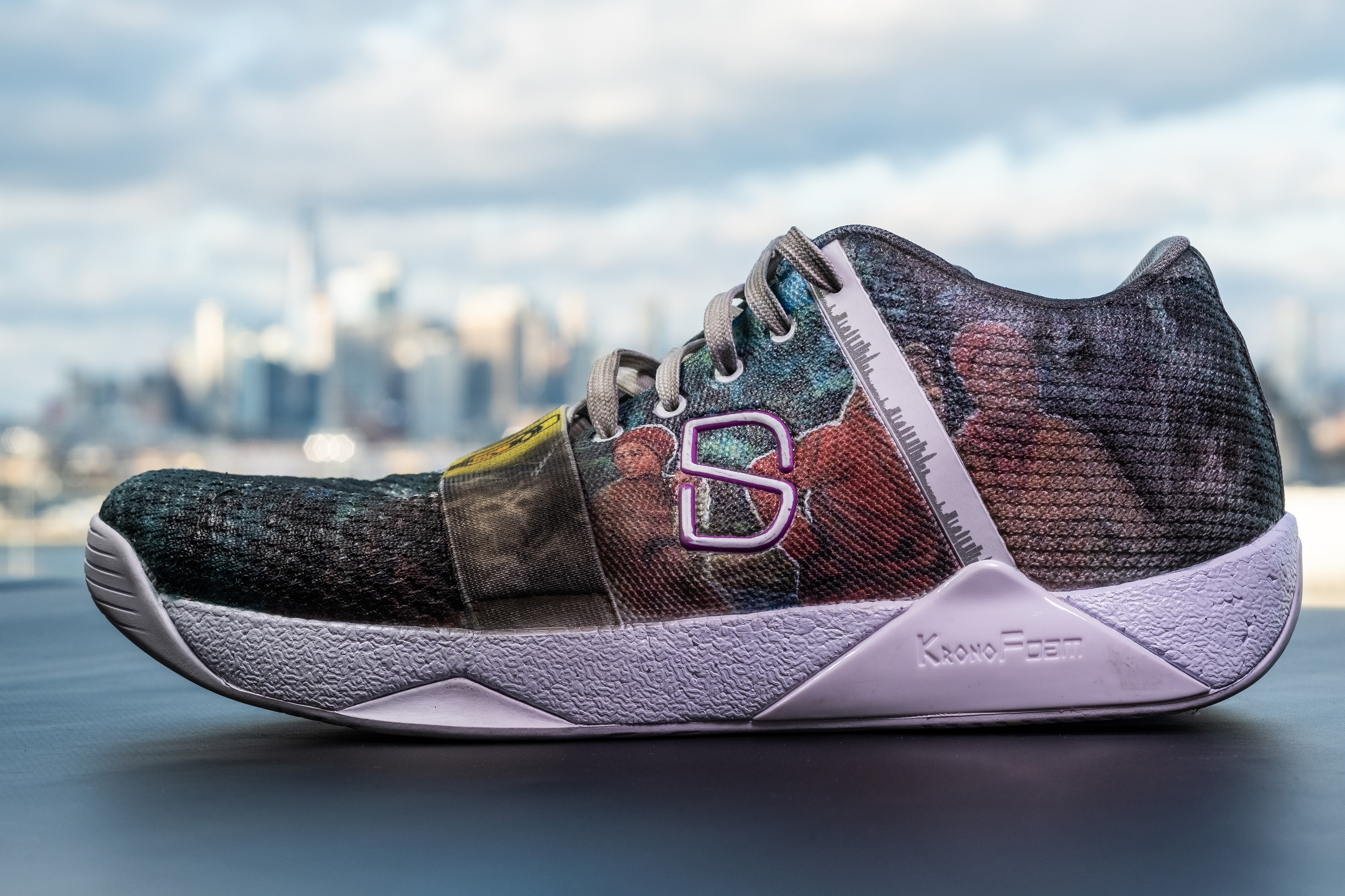 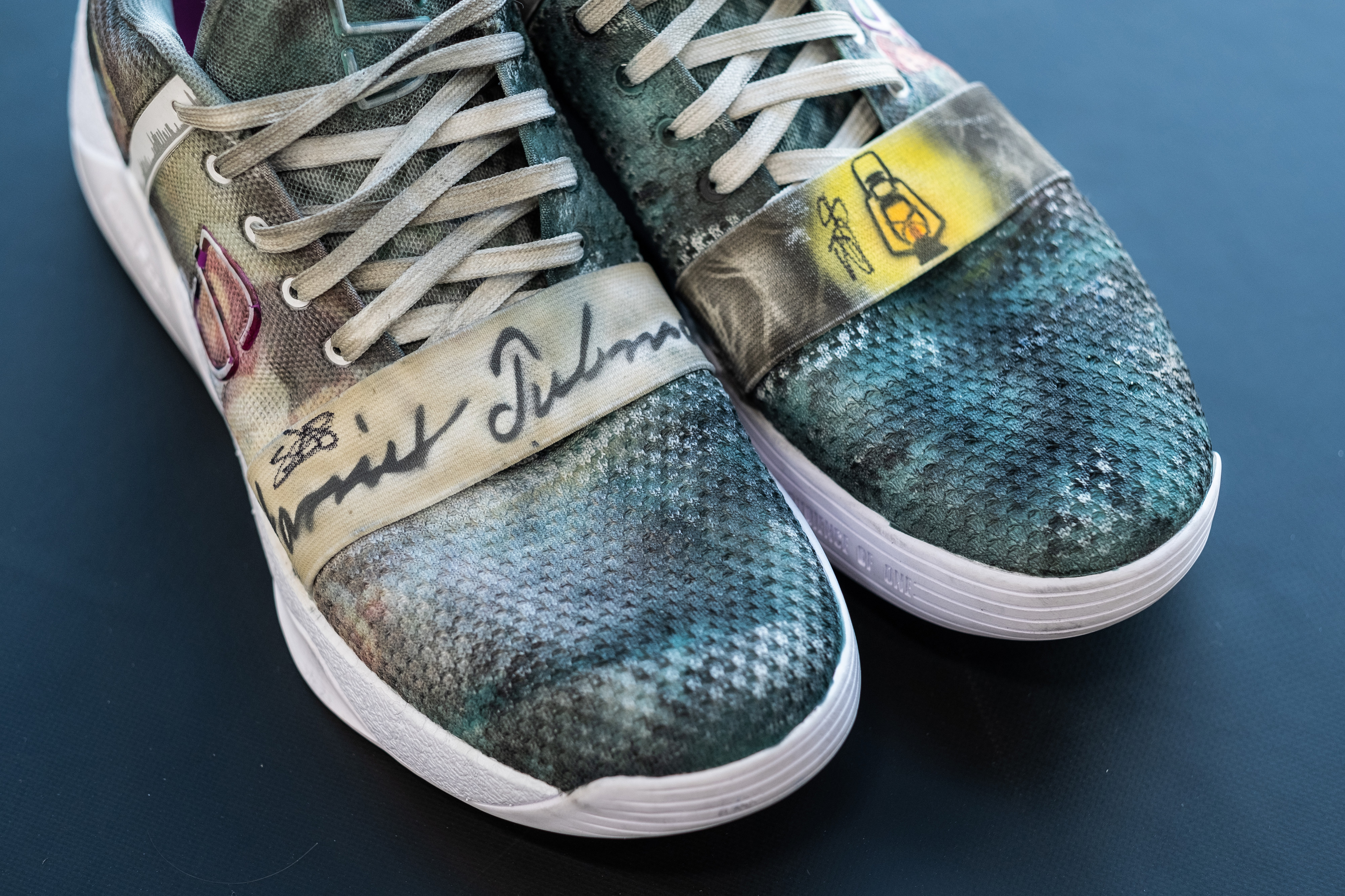 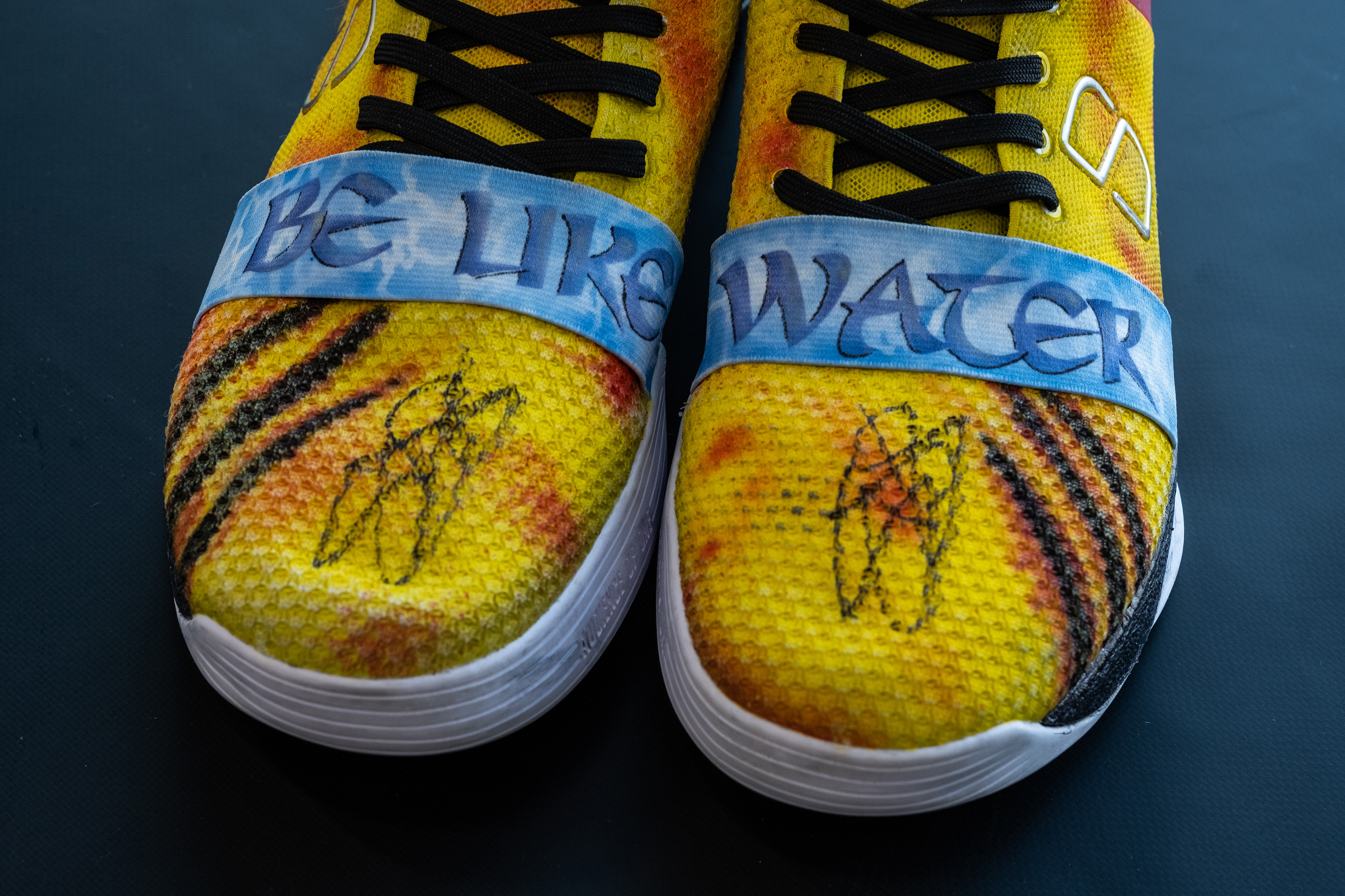 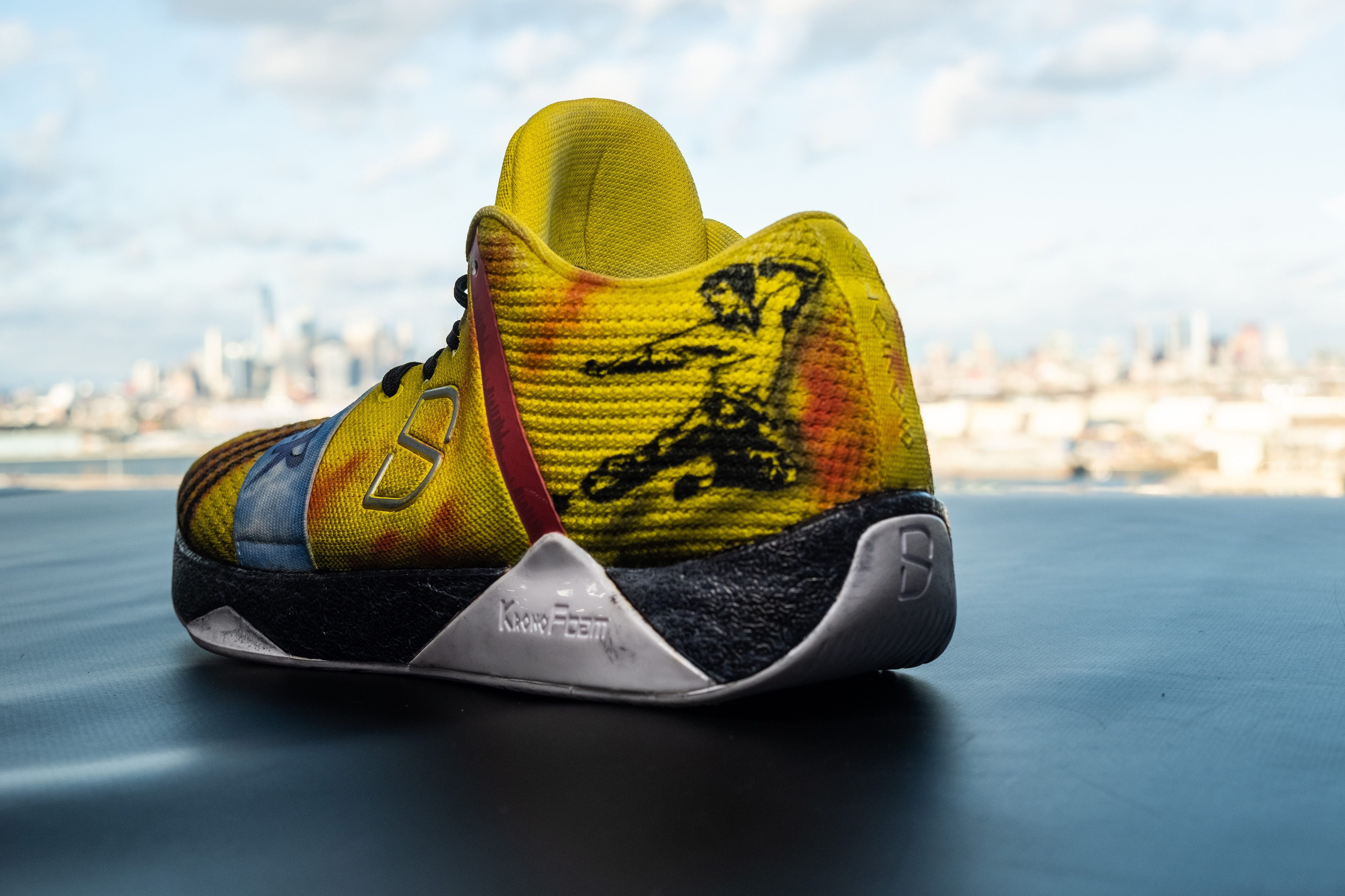 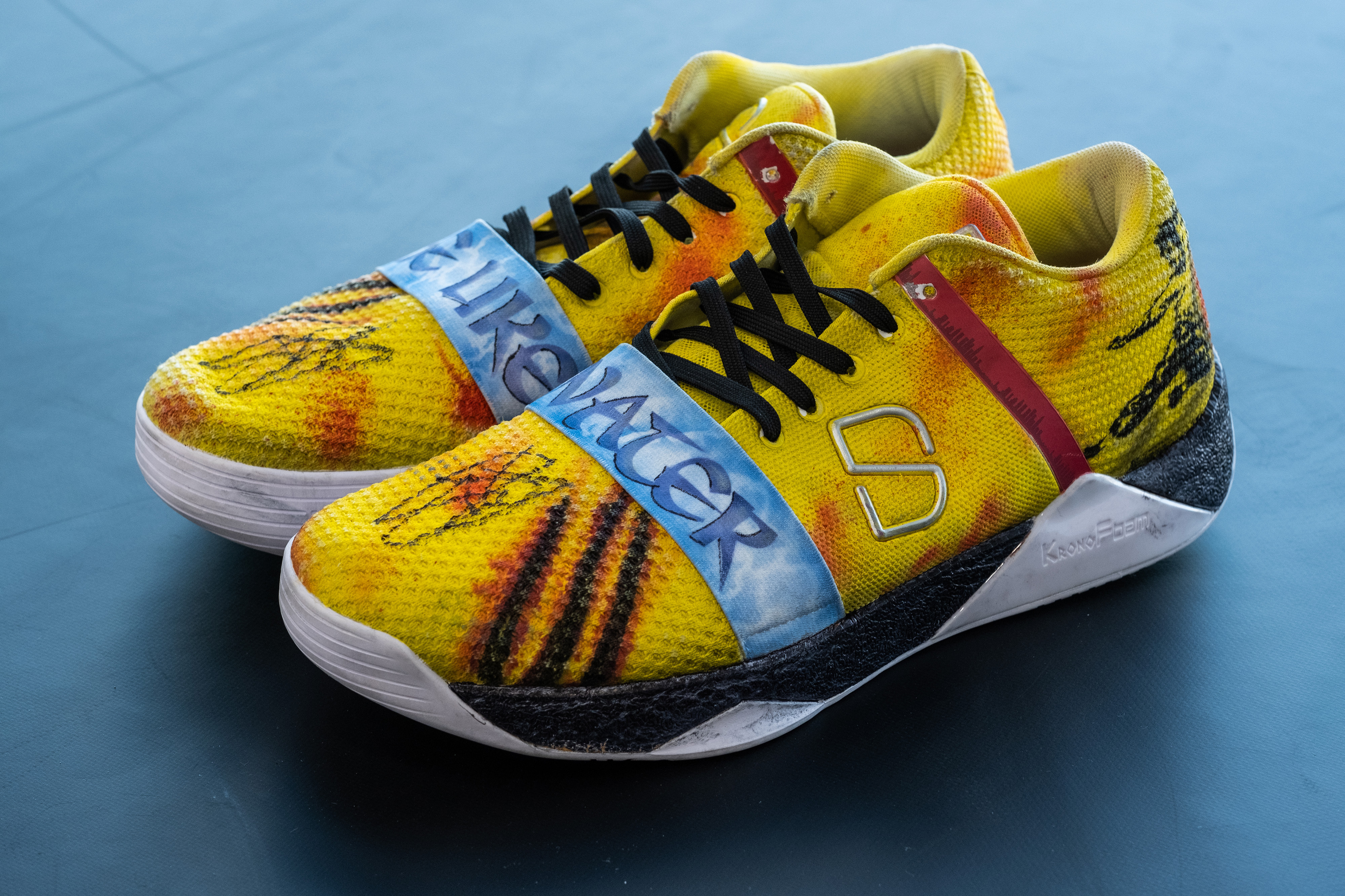 Dinwiddie’s most recognized, and perhaps most controversial, custom is easily the pair with the words “With Kap” on the top and the image of Colin Kaepernick on the side (Game 13 in Oakland, California).

“I got a little backlash for that,” Dinwiddie said. “The intent wasn’t to create any type of division but to honor a man who sacrificed everything to stand up for racial equality.”

The customs are auctioned off after each game, with part of the proceeds going to youth charities.

Dinwiddie also has his own Dinwiddie Family Foundation, which offers college scholarships and has a mission to help at-risk and disadvantaged youths through fitness and educational programs.

Taylor, Dinwiddie’s high school coach, is not shocked by the generosity of his former player.

“He called me his rookie year and told me that he didn’t have money, yet wound up making a donation that allowed us to go on a couple of road trips,” Taylor said. “He purchased all the laptop computers for our after-school study hall this year. I don’t have to reach out to him; he calls me all the time to ask what is it we need.”

Dinwiddie has come a long way from the person Atkinson said was “fragile” when he first arrived in Brooklyn just over two years ago. Now, Atkinson sees a guy who will eventually be a starter in this league with All-Star potential.

“You can argue he’s our best athlete, and he’s got that kind of talent,” Atkinson said. “The next ceiling to punch is the hardest one. But I don’t think you’re exaggerating to say that’s his ceiling.”

The way Dinwiddie has built his career is proof that anything is possible.

He’s gone from major surgery to being a second-round draft pick. From being traded for a guy who’s no longer in the league to playing in the G League. From signing with the Brooklyn Nets as a stopgap to signing a contract that gave him financial security.

And now, he’s launched a unique shoe brand that is generating buzz.

“The road’s been hard, having certain expectations when nobody believed in me,” Dinwiddie said. “That journey made me the person I am today. I love my life, I love where I’m at.

“I also wouldn’t change anything about how I got here.”