Athletes’ tributes, remembering first responders of color and more for the 15th year since the attacks

The first NFL Sunday of the season is upon us, and it happens to fall on Sept. 11, the 15th anniversary of the vicious terrorist attacks when nearly 3,000 people lost their lives at the World Trade Center in New York, the Pentagon in Washington, D.C., and near Shanksville, Pennsylvania.

It is a day that will forever remain embedded in the minds of many Americans and others around the world and there is not a year that has gone by out of the past 15 in which people don’t show their solidarity with the families of those victims and first responders who died.

According to ESPN.com, New York Giants wide receivers Odell Beckham Jr. and Victor Cruz are preparing to wear custom 9/11-themed cleats before and during Sunday’s season opener against the Dallas Cowboys at AT&T Stadium. The cleats by Kickasso will include U.S. flag versions for the game. Beckham will wear cleats that reference 9/11 during warm-ups, while Cruz will have a pair with his late father’s engine number on them. Cruz’s dad was a firefighter in Paterson, New Jersey.

The Buffalo Bills will take the field with custom uniforms on Sunday in their season opener on the road against the Baltimore Ravens that include a special helmet decal, pins and gloves in remembrance of the 9/11 terrorist attacks. The team will also wear patriotic blue pants instead of their customary white.

The Seattle Seahawks are reportedly planning a pregame demonstration before their contest against the Miami Dolphins.

According to The Tennessean, the NFL banned Tennessee Titans linebacker Avery Williamson from wearing his custom cleats showing support for 9/11. The paper reported that rather than wear his cleats Sunday, the third-year pro is auctioning them to benefit Operation Warrior Wishes. However, multiple New York and New Jersey police associations offered to pay any fine levied by the NFL against Williamson if he goes through with his original plan.

MLB will also have 9/11 tributes at 15 ballparks on Sunday.

MLB, clubs to observe September 11 with tributes across the league. https://t.co/YbocdDd6dv #NeverForget pic.twitter.com/PtLRZIPmLn

According to MLB.com, home clubs will host pregame ceremonies, including a moment of silence, and the “We Shall Not Forget” MLB silhouetted batter ribbon will be displayed throughout ballparks. On-field personnel – including players, coaches and umpires – will wear caps with a side patch of an American flag during games. The Toronto Blue Jays will wear customized caps recognizing both the United States and Canada. The MLB’s proceeds from sales of these caps will be donated to the 9/11 Memorial and Museum, the Pentagon Memorial and the Flight 93 Memorial.

A 9/11/01 sign was stenciled on the Arthur Ashe Stadium court in remembrance of the 9/11 attacks of 2001, as Angelique Kerber of Germany served against Karolina Pliskova of the Czech Republic during their 2016 US Open women’s singles final match at the USTA Billie Jean King National Tennis Center in New York on Sept. 10. 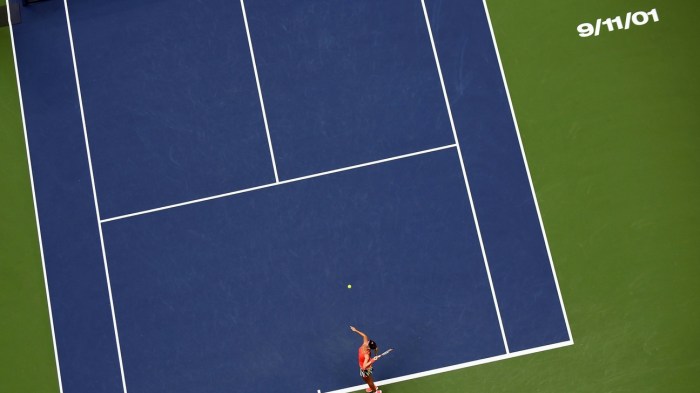 While so many lives were lost, take some time to remember 12 first responders who were killed in the attack. In 2011, the Huffington Post reported that the New York City Fire Department received widespread public support and good will after the attack. But the department struggled to recruit and retain firefighters of color. The city’s fire department at that time reported about 14,000 members and only 3 percent of them were black. They concluded that the number is close to the proportion who served during the attacks and in recent decades. 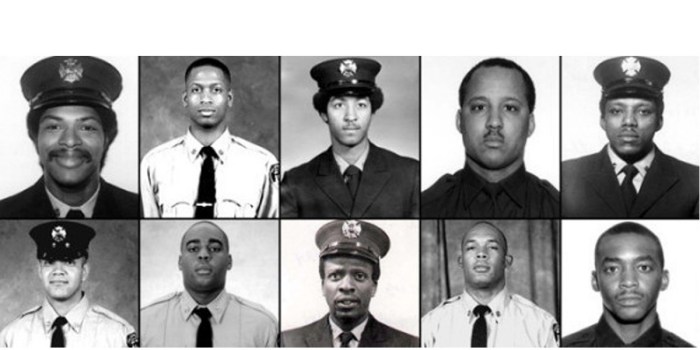 Today, many social media takers are participating in the #neverforget hashtag.

We must #neverforget 9/11. My campaign will halt all advertising to honor those who lost their life 15 yrs ago. pic.twitter.com/Hp5O0aBJef

.@StephensonLance reppin the @FDNY. I 👀 you and appreciate the support. #NeverForget 🇺🇸 pic.twitter.com/zSxCxiBAVm

FDNY Members Who Made The Supreme Sacrifice In The Performance Of Duty On September 11, 2001. #NeverForget pic.twitter.com/QCRuLob9Z4

LFD remembers the 2,977 victims of 9/11. 343 were #firefighters that made the ultimate sacrifice. #neverforget pic.twitter.com/a8inydpJ47

#NeverForget does'nt really matter how many it has been,all innocent lives lost on the day will always be remembered pic.twitter.com/OOHQ8aohFa

My heart goes out to those who lost their lives or lost someone this day 15 years ago. #911 #NeverForget ❤️ pic.twitter.com/SGYJXVaORB

This Story Tagged: NFL MLB Get Lifted 9/11 US Open