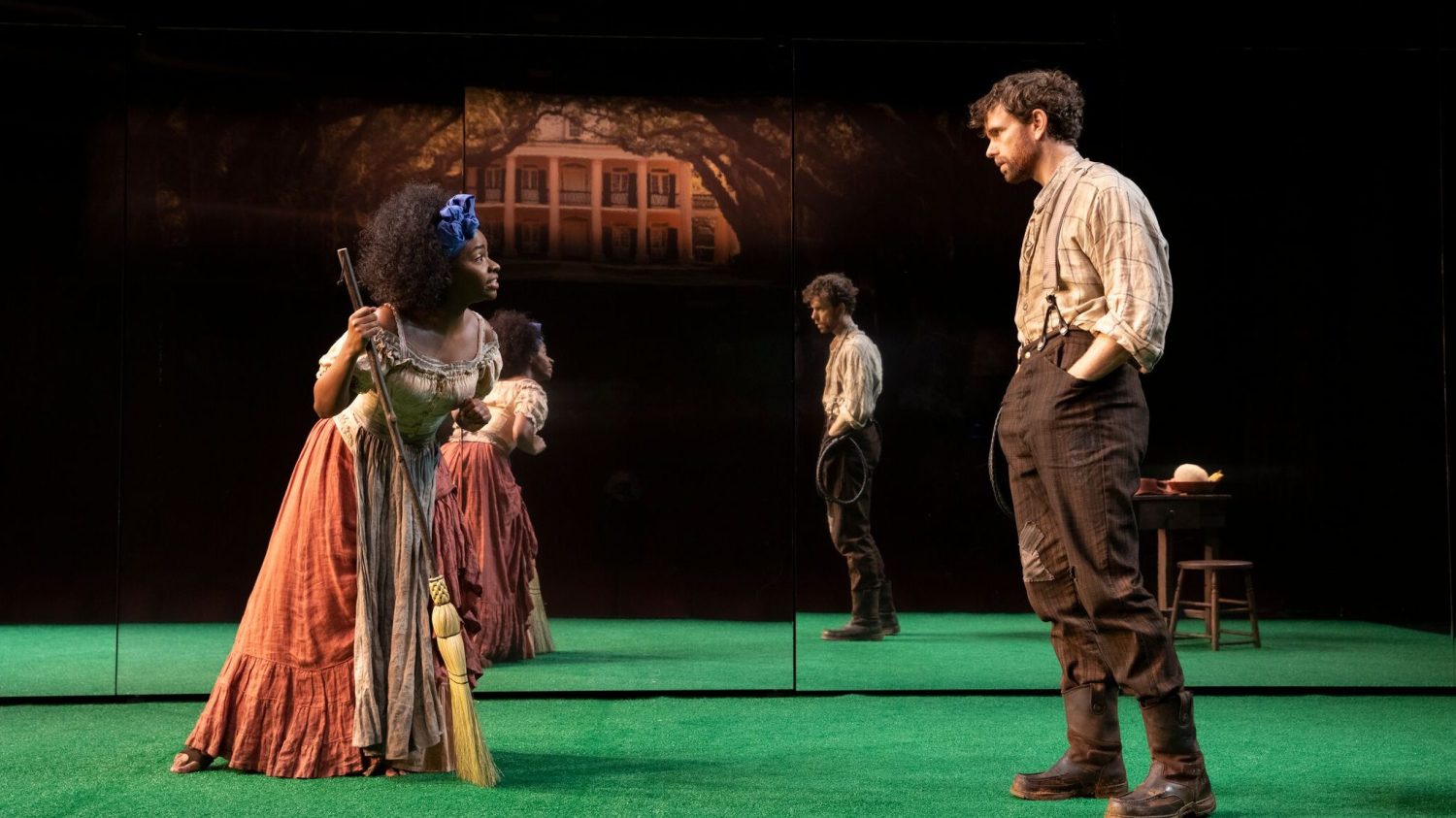 Believe it or not: Two new plays feature modern characters volunteering to be slaves

Forget plausible. Is it defensible?

If one were to compile a list of Things Black People Do Not Care to Resurrect, the institution of slavery would be at the top by unanimous decision. The instinct to reach for pitchforks is understandable, but hold off for a moment. If having modern black characters enter into slavery or recreations of it is going to be a thing, it might be best to establish some guidelines. Not rules, which only invite themselves to be broken, but some best practices.

Slave Play enjoyed a much buzzed-about run at New York Theatre Workshop (Madonna came!) before it closed in January. The plot revolves around three black characters, all in interracial relationships, who invite their white partners to a Virginia plantation for something called Antebellum Sexual Performance Therapy. The couples have reached psychosexual impasses in their relationships, and they are all seeking a way back to having good, enjoyable sex. Harris, the creator of this scenario, is a 29-year-old graduate student at Yale School of Drama.

White Noise is the product of a 55-year-old Pulitzer Prize winner and is running at the Public Theater through May 5. In it, Leo (Daveed Diggs) is a black artist who asks his white friend, Ralph (Thomas Sadoski), to buy him for a period of 40 days and 40 nights for $89,000, the amount it will take to pay off his credit card and student loan debt. Each man is in a relationship: Leo is with a white woman named Dawn (Zoë Winters) and Ralph has a black girlfriend named Misha (Sheria Irving).

Both plays follow white characters as they submit to the seduction of white supremacy and finally admit that they’re not necessarily the Good White People they believe themselves to be.

The imagery required by such a thought experiment is deeply disturbing, of course. That’s the point.

Slave Play includes a scene in which a black woman named Kaneisha is ordered to eat fruit off the ground at the behest of her white overseer/boyfriend. In White Noise, Leo is placed upon a desk that functions as an auction block while wearing an iron collar designed to snag on trees and branches and break the wearer’s neck should he or she run away. Ralph forces him to wear a T-shirt that reads “SLAVE.”

The night I saw White Noise, there were audible gasps of horror when Diggs-as-Leo entered the stage with the collar around his neck. It wasn’t just the presence of an iron torture device that inspired such reaction. It was Leo’s body language. His shoulders slumped. The light had disappeared from his eyes. He was enveloped in a cloud of shame and resignation. In that moment, I could not see Leo. I could only see Daveed Diggs, and it was beyond awful.

I wanted to vomit.

Forget plausible. In what world, imagined or otherwise, was this level of degradation useful, much less defensible?

I couldn’t be fully present for the remainder of the show. Instead, I started wondering how Diggs was managing to play this role for eight performances a week. I checked my phone to see how much more of Leo’s enslavement we’d have to endure. I squirmed in my seat and I seethed, waiting for the play to end.

Is it even possible to suspend disbelief to accept “modern black person voluntarily enters slavery” as a plausible (if absurd) plot point? How do we determine where the proverbial line is?

Its location depends upon a number of factors. It’s helpful to think about the use of slavery in storytelling the way we do with other topics that audiences can find repellent, such as sexual violence.

In recent years, plenty of critics have written about the way sexual assault is deployed in film and television, especially because both mediums are dominated by male writers and directors and much of the sexual violence that happens to female characters happens without much thought, or as motivation for the vengeful actions of another male character. It’s gratuitous.

In 2016, there was a tense exchange between HBO’s head of programming and members of the Television Critics Association, who were challenging the network’s reliance on rape as a plot device in The Night Of and Westworld. In 2015, after a disturbing episode of Game of Thrones aired in which Sansa Stark (Sophie Turner) was raped by her husband on their wedding night, Washington Post critic Alyssa Rosenberg offered some clarity on how to think about the way sexual violence is deployed in storytelling. “I think it’s important to preserve the distinction between saying that something simply isn’t for me and drawing a more definitive conclusion that something is a poor artistic choice,” she wrote. “You can assert the former, but you have to argue the latter, using the text and the language of the artistic form at hand.”

So when it comes to Slave Play and White Noise, which are both risky, wire-walking productions, how do we know when the choice to have black characters willingly enter enslavement is simply personally distasteful and when it’s a poor artistic choice?

The first two points are easy enough to understand. The likelihood that a show will be terrible if it treats the choice to become a slave with the same consideration that one might give to forgoing flossing is 99.9 percent. It’s not an exact comparison, but see: the uproar when Russell Simmons released a “Harriet Tubman sex tape” under the auspices of parody. There are ways to make excellent jokes about the most repugnant of topics (hello, The Producers!), but it’s not easy.

In White Noise, Leo, an insomniac, has a contract drawn up that lays out the terms of the enslaved engagement after he’s attacked by police while walking in his neighborhood one night. Leo comes out of the incident with a badly bruised face, a broken tooth and a desire for one of his oldest friends to own him. As Leo puts it:

Both White Noise and Slave Play are deeply considered works, not intellectual clickbait. Slave Play especially understands the need for an off-ramp if audiences are to follow its characters to such a dark place. It even includes a safe word: “Starbucks!” Furthermore, Slave Play is based in a real kink that exists in the world of bondage, dominance, sadism and masochism. It’s strange, but it’s not unthinkable.

The journey to urban plantation life in White Noise feels a little more undercooked. Black men get harassed and beaten up by the police with such frequency in this country that black parents prepare their children for it. Using a violent encounter with police as Leo’s motivation does seem rather flippant or, at the very least, not all that well-considered. It certainly invites a question: Given how often these interactions take place, why aren’t other desperate black men offering themselves up for further abuse and unpaid labor? The answer is obvious, and the idea collapses in on itself before we’re halfway through the play.

The third guideline for putting voluntary slavery on stage — it can’t be all about the white people — is the trickiest.

Parks recently participated in a discussion about White Noise in New York with Oskar Eustis, the show’s director and the artistic director of the Public Theater, and philosopher Kwame Anthony Appiah. Parks said she has a rule for her approach to writing characters: “Everyone gets to ride the bus. … No one gets thrown under the bus.”

Parks added: “I love each of these characters, and I understand each of their points of view.”

I wanted to scream. When the person on the bus is a rapist, or a slave owner, or a Nazi, and an enthusiastic one at that, it’s OK to throw them under the damn bus. It is possible to write a play about race and racism that manages to successfully keep all its characters aboard the bus without capitulating to whiteness (The Niceties is an example), but it’s not as straightforward as understanding the white ones.

If only White Noise reflected the love that Parks proclaims for each of her characters. Of the four main roles, Ralph, the sole white man, is the most clearly developed, to a stunning degree. His motivations are the most clearly articulated, and his grievances genuine. Parks sends him down a rabbit hole of white supremacy so deep that by Day 28 of his jaunt into slave ownership Ralph joins a “White Club” and then brags to his White Club friends that he has his own personal slave. Ralph’s storyline cuts off the development of all the other characters in White Noise.

I had a better understanding of the show’s weaknesses after I heard Eustis say he wanted to keep the audience on Ralph’s side for as long as possible. Again, I found myself stifling the urge to scream.

Why!?! Why is there a need to keep the audience on Ralph’s side at all? Everything, from the Constitution (as playwright and actress Heidi Schreck thoughtfully illustrates in What the Constitution Means to Me) to the Supreme Court to virtually every instrument of power in the history of this country is on Ralph’s side. To quote Peggy Olson in Mad Men: “You have everything, and so much of it.”

To conduct a successful thought experiment about a black person volunteering for slavery, it’s paramount to acknowledge this imbalance and to resist the deep gravitational pull of white narcissism, which devours injustice toward black people and spits out white injury. (Ralph finds that slaveholding soothes his wounded ego after he’s passed over for a tenured professorship in favor of a person of color.)

It’s a stage version of “All Lives Matter”: What starts out as a story about how white supremacy affects a black person (Leo) becomes subsumed by talk about how white people feel and how they’re being victimized. There’s no room to center the voice of the person who the terrible thing actually happened to. And that’s not enough to justify the humiliation of trotting out some lost brotha, who doesn’t feel remotely believable, in an iron collar.

Parks concludes White Noise with Leo the insomniac shouting, “I’m awake. I’m awake.” But she never establishes how he managed to be asleep for so long in the first place.

Lest you think this sort of well-intentioned clumsiness is unique to stories about American racism, I assure you it is not. In her 2018 film When Hands Touch, writer-director Amma Asante somehow managed to All Lives Matter the Holocaust with a story in which a black German girl falls in love with an actual Nazi.

By contrast, even though the white characters of Slave Play cannot get past their own solipsism, the play itself does. The black characters go on their own journeys and come to their own realizations independently. And there’s a deeper truth within Slave Play, which is that sometimes nothing, not even placing oneself in the role of a slave owner, will get white people to wake the hell up. Sometimes you just have to take the L and let them go.